WINNING. Sooooooo much WINNING. – Here’s what is funny about this: I’ve actually had complaints this week that I’ve been focusing too much on all the WINNING President Trump is bringing to our country. So, some people who claim to be fans of President Trump actually are getting tired of all this WINNING. Once again, Trump was right when he said “We will WIN so much, you’ll get tired of all the WINNING.”  You can’t make this stuff up.

One more time, every major U.S. stock market index closed at record high levels as investors express their enthusiasm over the President’s Phase I Trade Agreement with China and congress’s final passage of the USMCA. Despite all the false criticism emanating from the corrupt national news media, the markets understand how these trade deals with America’s three largest trading partners will positively impact this country’s economy for years to come.

So, suck it, all you fake, corrupt journalists and contributors at CNN, MSNBC, the New York Times and the Washington Post. Your efforts, in concert with the Democrat Party, to talk this country into an economic recession that began last summer have, like everything else you have tried to harm this President and what he is accomplishing for America, miserably failed. That could not possibly happen to a nicer bunch of evil minions.

Meanwhile, out in the Commonwealth of Virginia, Governor Baby Killer Blackface KKK Ralph Northam thinks creating a mere recession is just small potatoes. – Northam, along with this Democrat majority in the state assembly, is apparently intent on planting the seeds for a second civil war. That appears to be the only rational interpretation of the moves and public statements Governor Northam and fellow Virginia Democrats have been making in recent weeks.

As the Democrats in the assembly advance a series of gun control bills , assembly members and  Northam himself have promised they will result in law enforcement going door to door if necessary to confiscate certain kinds of guns from ordinary citizens. Gun rights groups have very predictably responded by organizing a massive rally in support of the 2nd Amendment to take place in the state capital of Richmond this weekend. The rally will be held Monday as a part of the Virginia Civil Defense League’s (VCDL) annual lobby day.

Governor Northam has reacted harshly – again, very predictably – to the rally, declaring a state of emergency based on only the vaguest of pretenses.

Here’s the text of his declaration:

“Credible intelligence gathered by Virginia’s law enforcement agencies indicates that tens of thousands of advocates plan to converge on Capitol Square for events culminating on January 20, 2020. Available information suggests that a substantial number of these demonstrators are expected to come from outside the Commonwealth, may be armed, and have as their purpose not peaceful assembly but violence, rioting, and insurrection.”

Have you ever seen so many weasel words crammed into just two sentences?

“Credible intelligence” and “available information” you say? What in the hell does that even mean? And “plan to converge on Capitol Square”? How did you know that? Why, could it be because the VCDL properly applied for a lawful permit to use that public space? You know, like a group of good, law-abiding American citizens, i.e., not Antifa, might do?

Democrats like Northam never complain when people come from out of state to join in liberal protest marches, or hell, even to vote illegally in their elections. Just so long as they vote Democrat, right? Right.

Clearly, Governor Blackface and his friends in the corrupt news media are attempting to set the narrative for Sunday’s rally as being the sequel to the 2017 Charlottesville fiasco, when a couple of dozen bad actors provided the pretense for the media to smear thousands attending an otherwise peaceful rally as being “white supremacists.” This is how every rally-goer on Sunday will also be portrayed if the media can find one clown wearing a confederate flag patch on his jacket or forming his fingers into what used to be the “ok” sign. So, expect that to happen.

Regardless of what really takes place in Richmond this weekend, Governor KKK will without any question at all attempt to spin it as a rationale to continue pushing for his gun control/confiscation legislation. But he and his fellow Democrats have a real, sticky problem in seeing this effort through to its logical conclusion.

That problem centers on the reality that Virginia is a mostly-rural state. Once you get out of the isolated population centers of Richmond, Arlington and Alexandria, the rest of Virginia is as red as red can be. The state’s 2016 election map looks like a miniature microcosm of the national map, with small islands of blue interspersed amidst a sea of red: 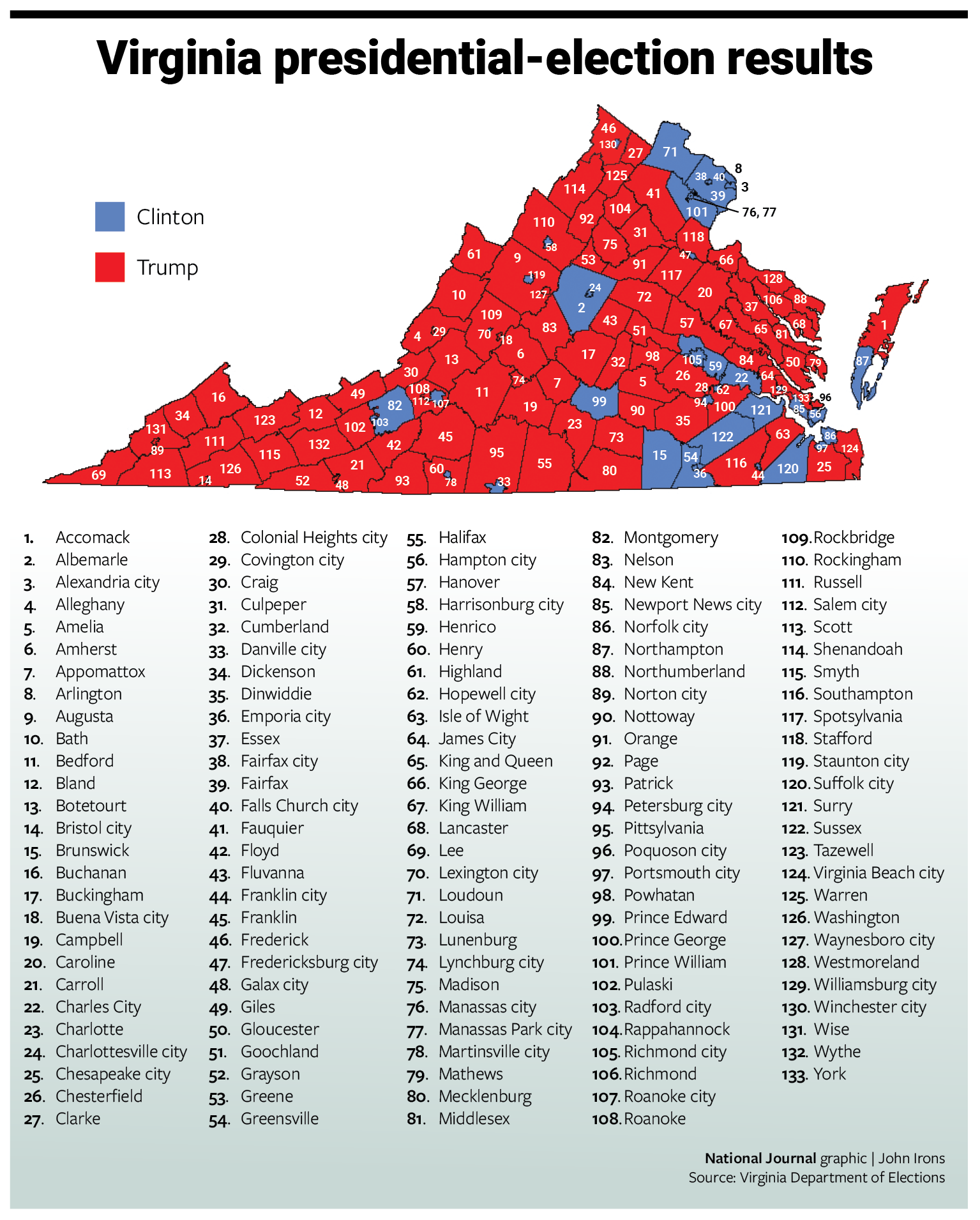 Prior to 2009, Virginia actually was a fairly reliable state for Republicans. But that has all changed with eight years of America’s Biggest Mistake, Barack Obama, and the massive expansion of the D.C.-based federal bureaucracy he inflicted on the nation. Even with Obama’s rapid raising of federal salaries, real estate in the District of Columbia remained too expensive for most bureaucrats, so tens of thousands of them settled across the Potomac in Arlington and Alexandria.

Given that well over 90% of federal bureaucrats are Democrats by nature, that massive emigration of the bureaucracy into Virginia ended up shifting the state’s politics.

Very predictably, those red, rural counties have taken exception to the Democrats’ looming gun grab. At last count, 105 counties and cities in Virginia have now taken the step of declaring themselves second amendment sanctuaries, with local officials promising to defy any efforts by the state government to confiscate firearms within their jurisdictions.

Should Governor Northam and his Democrat minions end up enacting these gun control bills and follow them through to their logical conclusion, many Virginia gun owners will not go quietly, and the country could find itself in a real constitutional crisis. Unless the Democrats begin to moderate what they are doing, they might be sowing the seeds for a second civil war in this country.

Sadly, Governor Northam seems by his actions and words to be perfectly fine with, and maybe even intent on, doing exactly that.

You may have been wondering why your support for Donald Trump has suddenly resulted in your being labeled a “white supremacist.” Doesn’t matter whether you happen to actually be white, or whether you are latino, black, male, female or one of the other mythical genders now being invented by the political left, if you support the sitting President of the United States of America, that means you will be labeled a “white supremacist” by the Democrats and our fake news media.

Don’t laugh at the notion that President Trump actually has Latino and Black supporters: A just-released Zogby poll shows the President’s support among those two demographics rising substantially in response to the ongoing “white supremacist” campaign. According to Zogby, 28% of registered Black voters and fully 49% of registered Latinos approve of Trump’s job performance.

Which of course is one more reason why the Democrats and their media toadies are frantically attempting to marginalize you as being some sort of inhuman monster. If the President were to win just 30% of Latino votes (he won 28% in 2016) and maybe 12% of the Black vote (he got 6% in 2016) next year, he will be re-elected in a massive landslide, and sweep in new, larger majorities in both houses of congress with him.

The Democrats cannot countenance that, so they believe they can counteract that growing public approval rating by labeling the President as a hater of Latinos and Blacks. But because ordinary Americans are not nearly as stupid as Democrats invariably assume them to be, this transparently cynical strategy is backfiring.

If you can remember all the way back to last week, Democrat members of congress and presidential candidates like Joaquin Castro (a guy who doxxes his own supporters), the pathetic Irish Bob O’Rourke, and Spartacus Booker rushed to argue that because Trump was a racist bigot who literally caused the mass shootings in Dayton and El Paso, why, that means he simply must cancel all future rallies like the one we saw Thursday night in New Hampshire.

Why do you suppose they would make such an outlandishly laughable leap of logic? Because they know just how effective those rallies happen to be, and understand how critical they are to the President’s chances of being re-elected. Other than his Twitter feed, those rallies are the only means President Trump has of cutting through the fake news media fog and talking directly to the American people.

But, you might be thinking, how does that work, since the only media outlet that televises the rallies is Fox News? New York Times best-selling author Larry Schweikart answered that question in his book – co-authored with Joel Pollak – “How Trump Won”:

As @joelpollak and I wrote in "How Trump Won," the main value of the rallies was NOT Trump speaking to those in attendance but the local news coverage into large regions that allowed Trump to get his message out in short bursts without national anti-Trump "panels" commenting.

[I’m not active on Twitter anymore, but if you are and you aren’t following @LarrySchweikart and @joelpollak, you are missing out.]

Note what Larry says in that tweet: “the main value of the rallies was NOT Trump speaking to those in attendance but the local news coverage into large regions that allowed Trump to get his message out in short bursts without national anti-Trump ‘panels’ commenting.”  Bingo.

The President doesn’t really care that CNN and MSNBC don’t televise his rallies, in part because their audiences are rapidly shrinking since their “muh Russia collusion” narrative crashed up on the shoals of the Mueller Report, and in part because anyone watching those two fake news networks is already completely brainwashed anyway.

What Trump cares about is that he spoke to 12,000 New Hampshire voters Thursday night, and anyone who draws a crowd of 12,000 in New Hampshire is going to get gobs of coverage on every local newscast in the state. That coverage is going to largely consist of out-takes of key messages from his speech. That is an incredibly valuable means of influencing hundreds of thousands more potential voters.

Note also that, while Schweikart and Pollak say the local coverage is the “main value” of the rallies, they do not say that the attendance at the rallies is not important as well. Quite the contrary: The President spoke to more individual voters in that arena last night than any of the Democrat candidates have spoken to through the course of their entire campaigns at this point.

Even more valuable, every one of those 12,000 potential voters left that arena pumped up and ready to go try to convince their friends and family to vote for Trump. They’ll all be talking for weeks and months about the excitement he generated in that arena.

So, you wonder why you are suddenly being labeled a “white supremacist,” an inhuman monster who must be shunned and punished? It’s because if you are just a regular patriotic American who loves your country and wants it to be great again, then the Democrats have literally no hope of defeating you and President Trump in 2020.

It really is that simple.