Being “woke” = going broke. – At least that appears to be the case for Collin Kaepernick-supporting Nike. In case you missed it, the woke shoe maker that seems to have contracts to supply the shoes and uniforms for most major sports teams across the globe somehow managed to report a princely $790 million loss for the 4th quarter of 2019.

The company blames part of the loss on store closures related to COVID-19, but that can’t be true, given that none of those closures took place until late in the first quarter of 2020. Nike also announced that it will be executing a big layoff as the result of its losses, which come on the heels of the massive, Kaepernick-focused advertising campaign it ran during the second half of 2019.

Here is a corporate BS-filled statement issued by Nike:

“Consumer Direct Acceleration is the next digitally empowered phase of our strategy,” Nike said in a statement. “We are building a flatter, nimbler company and transforming Nike faster to define the marketplace of the future. We are shifting resources and creating capacity to reinvest in our highest potential areas, and we anticipate our realignment will likely result in a net loss of jobs.”

CNN’s Ryan Lizza is the Jim Acosta of Yameche Alcindors:

You just could never make this stuff up, folks. That question is something you might expect a snot-nosed 12 year-old junior high dumbass to ask. This is why the White House should never hold another press briefing and should revoke all press passes. These corrupt reporters are a pestilence on our country.

Ever wonder what Dr. Fauci does with that mask once he thinks the cameras have been turned off? – Now we know:

Cameras off?
Good, I can take off this mask then.pic.twitter.com/e5Bid3k1lc

This man is a national menace who has lied to us every step of the way. For him, it’s all just a show.

Can’t get any real information about what’s happening in Texas related to COVID-19? – You are in that boat if you rely on TV or the newspapers for your “news.” They only report the top-line number, which is the number of new “cases,” a number we all know is hyper-inflated by hospitals so they can maximize revenue from the federal government.

If you want real, actual detailed information, you are left to go to Twitter, of all places. Specifically, you must go to Alex Berenson’s Twitter feed. Yesterday, he received an email from a senior executive at one of the state’s major ER chains of hospitals:

Wondering what’s really happening in Texas? Here’s the email, from a senior executive at a Texas ER chain that sees thousands of patients a month. He went on the record – a brave move. I’m going to let him speak for himself. (Two tweets of screenshots. Worth reading to the end.) pic.twitter.com/4xuBdTIFIc

Here are the attachments (this is long but worth the read): 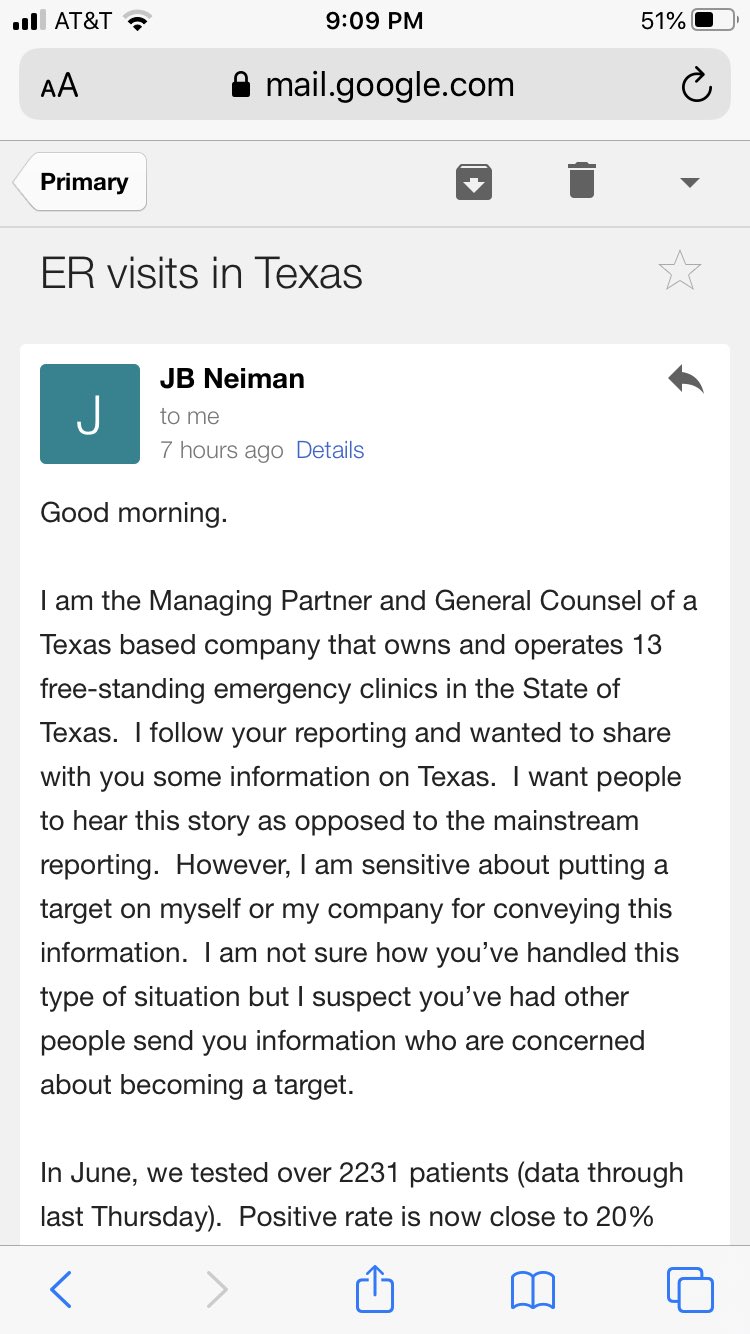 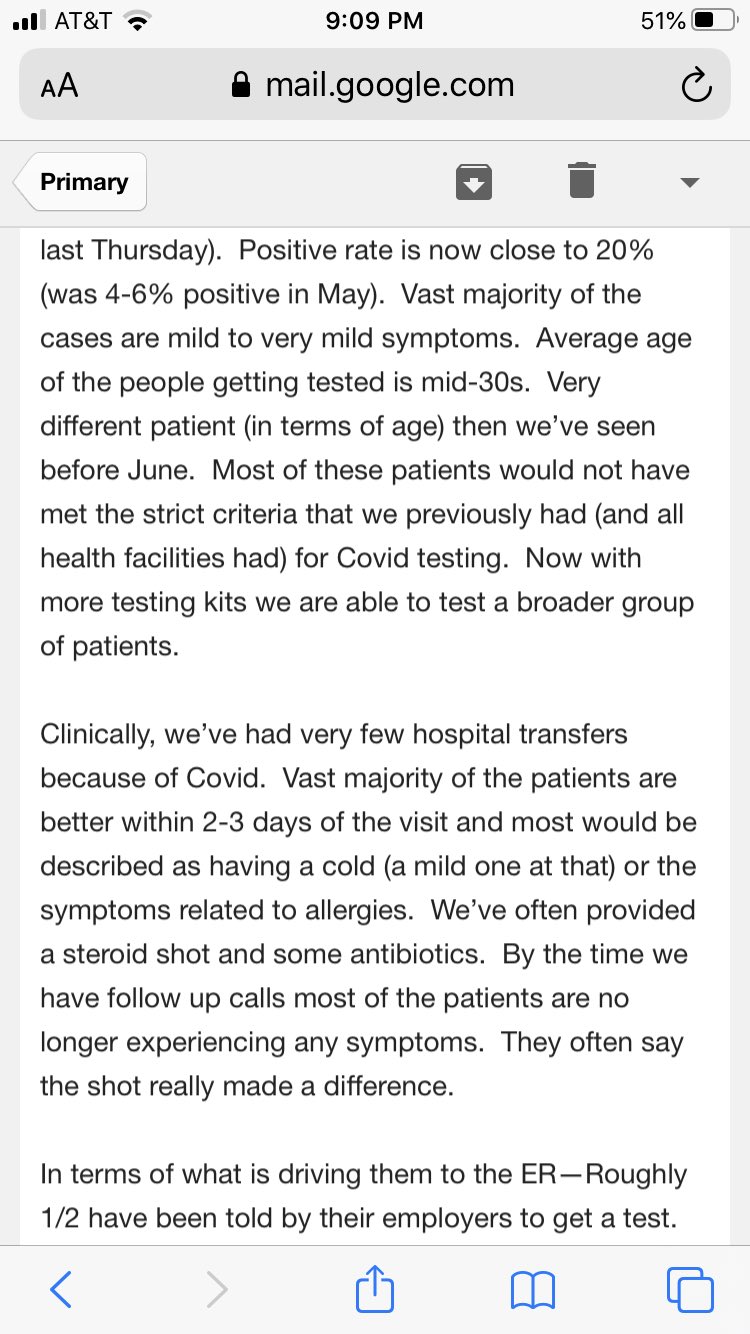 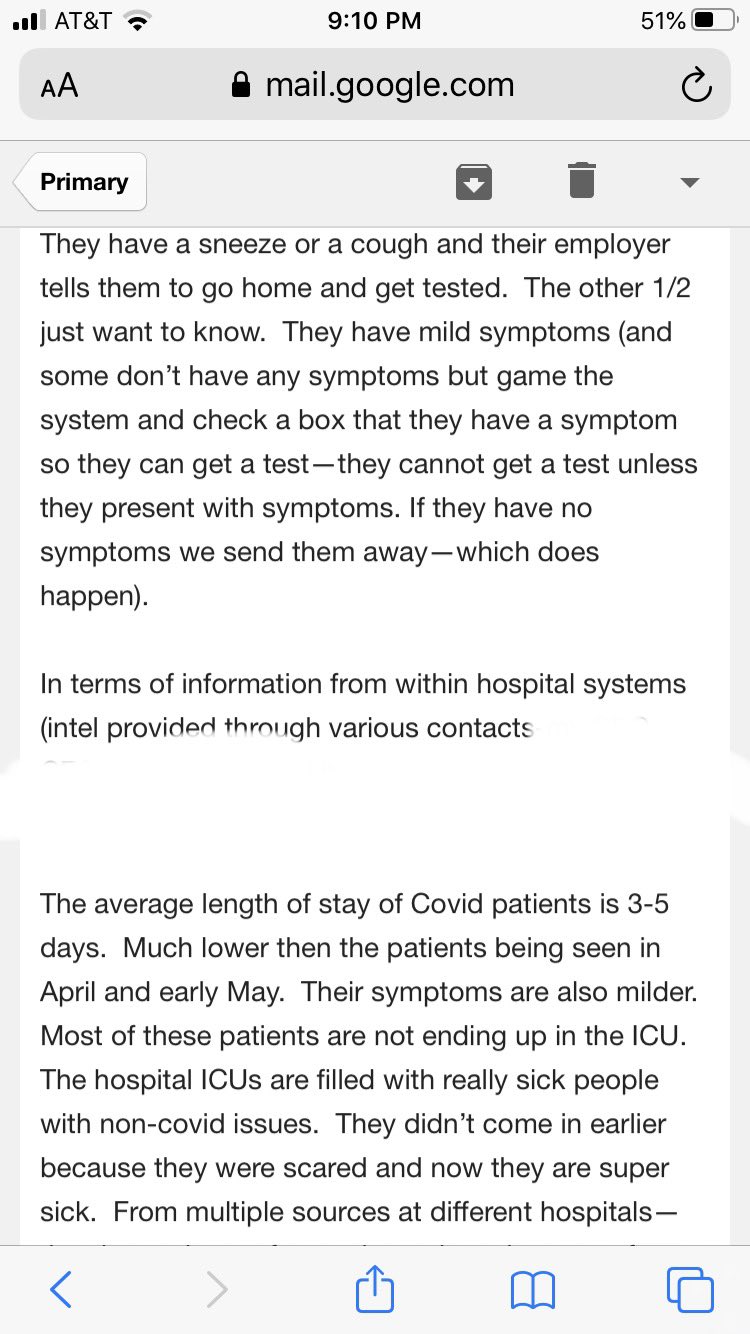 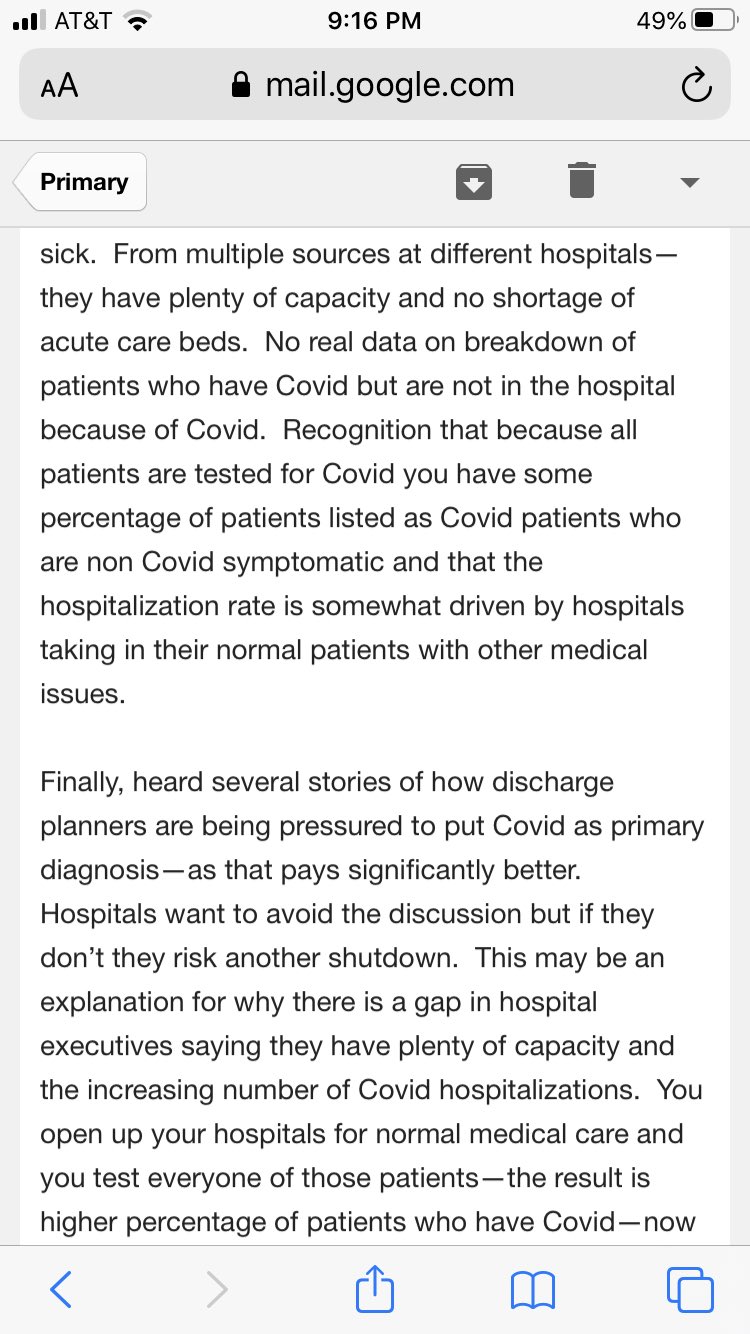 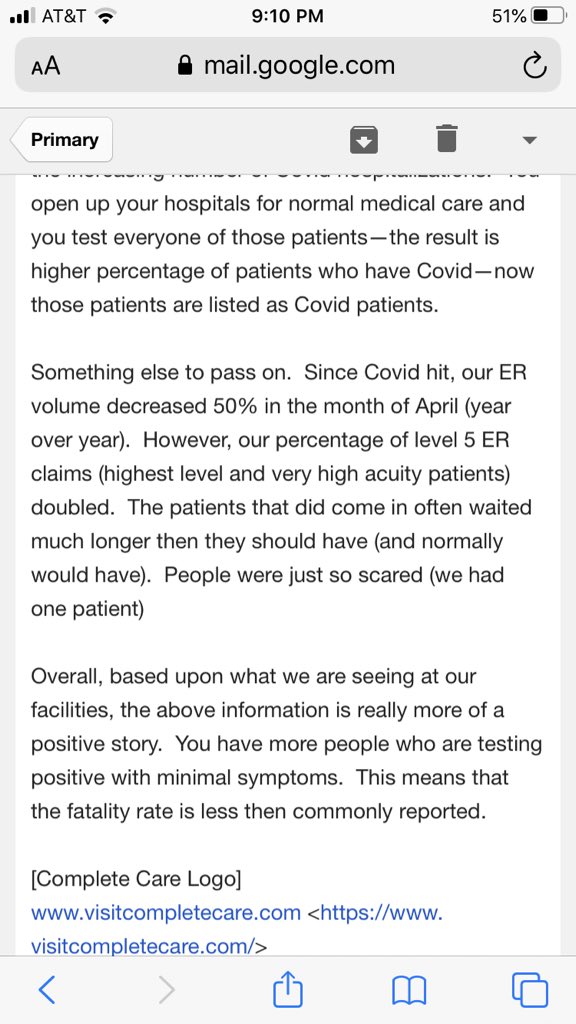 Bottom line is this:

– Virus is now showing up in a much younger group of patients than before, mainly because employers are telling anyone who sneezes or has the sniffles at work to go get tested;

– The vast majority of the new “cases” show very mild or no symptoms at all;

– Those admitted to the hospital see stays that are much shorter than seen during March thru May;

– Texas hospitals are not in danger in any way of being overwhelmed by this new outbreak.

By its systematic refusal to report the full truth about what is really happening in Texas and other states where the number of cases is surging, our corrupt news media is, intentionally or not, destroying our country’s way of life and causing catastrophic damage to our economy. They are the very worst and most destructive class of people in our society today.

Texas hospital hoax ensnares the Governor. – Texas Governor Greg Abbott announced yesterday that residents in the counties that are home to Houston, Dallas, Fort Worth, Austin and San Antonio must wear masks whenever they visit any business establishment.  His new order will become effective at 6:00 tonight, and will remain in effect through August 4. Which is fine, although it is sad to see Gov. Abbott falling victim to the “case” counting fraud the state’s hospitals are committing.

I’ve told you repeatedly over the past two weeks that every hospital in my home state – and I understand in many other states as well – have been scamming the taxpayers by classifying every incoming new patient who tests positive for COVID-19 as a “COVID-19 Related” case. It doesn’t matter if the patient is there for knee surgery or tonsillitis or to have their appendix removed, they officially become a part of the fraudulent COVID “case” count.

The hospitals are doing this because congress stupidly included a flat $36,000 per-patient reimbursement to hospitals for all “COVID-19 Related” cases in one of its early stimulus bills. So this is one big money scam, and there cannot be any question now that Gov. Abbott is aware of that fact, because his own spokeswoman for the Texas Department of State Health Services, Lindsay Rosales, confirmed that fact to JustTheNews his week:

Lindsey Rosales, a spokeswoman for the Texas Department of State Health Services, confirmed to Just the News this week that the state is categorizing every inpatient in the state with a positive COVID-19 test as a COVID-19 hospitalization.

“The number of hospitalized patients includes patients with a lab-confirmed case of COVID-19 even if the person is admitted to the hospital for a different reason,” Rosales said.

Asked if inpatients in the state are tested for COVID-19 whenever they arrive for treatment, Rosales said, “Hospitals set their own protocols for determining when and if to test patients for COVID-19.”

She said the state does not keep track of the patients hospitalized with the coronavirus versus those hospitalized specifically because of it.

Which is exactly what I told you earlier this week.

Governor Abbott justifies his new order by claiming that “COVID-19 Related” patients are filling up the state’s hospitals and ICU beds, but that is not at all the case. Read the letter below from the head of the Dallas-Fort Worth Hospital Council:

Only 38% of available respirators in use for just over 1,000 actual COVID-19 patients, who make up less than 10% of patients in the area’s hospitals. For this, Governor Abbott includes a new prohibition on elective surgeries in his new order.

To be clear: I don’t mind wearing these masks, and have been doing so since March on every trip to the grocery store or any other public place, if only to make other people feel more secure. I’m fine with it. What I’m not fine with is public officials making policy that is likely unconstitutional based on false filings made by hospital officials who should be held accountable.

Shame on Governor Abbott for supporting and refusing to acknowledge this blatant case of hospital fraud in the Lone Star State.