Hidin’ Biden has worked so well that they’re just gonna keep on doing it. – In a recording leaked last night, former Clinton bag man and past and future ruler of Northern Virginia, Terry McAuliffe, provides a blow-by-blow description of the Democrat/media strategy to saddle the nation with Creepy Uncle Quid Pro Farty China Joe Biden as its president.

What does a political party do when it is knowingly putting up a feeble, elderly nominee who is clearly suffering from advancing dementia? Why, you keep him in his basement and let the corrupt news media and social media monopolies construct what the CIA would call “a legend” around him.

That is exactly the strategy laid out by McAuliffe during a videoconference with Northern Virginia Democrats, as reported by Fox News:

“People say all the time, ‘Oh, we got to get the vice president out of the basement,'” McAuliffe told the “monthly breakfast” of the Norfolk City Democratic Committee. “He’s fine in the basement. Two people see him a day: his two body people. That’s it. Let Trump keep doing what Trump’s doing.”

“It’s hard for the vice president to break through,” McAuliffe told the group. “You’ve got the COVID crisis. He’s not a governor, doesn’t have the National Guard. He’s not the president, doesn’t have the briefing room. He needs to come out strategically. And when he says something like he did on race relations two days ago, it needs to have a big impact — thoughtful, and that’s what we’re preferring that he actually do at the time.”

“He’s doing a lot of local,” McAuliffe added. “He’s talking to two, three governors a day. He’s doing roundtables, Zoom calls. A lot of it’s being done in those six battleground states that we have going forward.”

In his comments, McAuliffe also assured the Democrats the 2020 election would be different than 2016’s, when nominee Hillary Clinton was hampered over the FBI’s investigation of her emails: “We’re not gonna have crazy Jim Comey coming out 12 days before the election with that ridiculous thing he did.”

But, McAuliffe conceded, “We’re building the digital today, which Trump has a huge lead on, he’s got like 88 million Twitter followers, so that’s a big emphasis for us.” McAuliffe also said during the video it’s “likely” he’ll run again for governor of Virginia in 2021.

So, it’s official: Democrats have made the decision to move ahead with a clearly addled man as their nominee. There will be no effort to replace Biden on the ticket, because the truth is that anyone else they put up this year would have zero chance of winning, and winning is all that matters even if the winner keeps asking his Secret Service guys to tie the laces on his loafers. This reality has several implications we all need to be aware of:

The latest skewed media polls must be intentional. It’s clear that NBC, ABC and CNN who have Democrat operatives like Chuck Todd, George Stephanopoulos and other Democrats in their news operations are consistently under-polling Republicans and therefore, reporting biased polls. They continue to poll adults or registered voters that skew away from likely voters. So instead of the 33% Republican turnout which actually happened in 2016, they are reporting polls on only 26%, 25% or even 24% Republicans. Since you get over 90% of the Republican vote, for every point fewer Republicans that they do not poll, they reduce your vote total by a point. In contrast CBS polled likely voters. CBS had 32% Republicans and a close national race. The bias seems to be an intentional strategy to suppress your vote. The latest media spin is that it’s too late to define Joe Biden and it’s too late for President Trump to win. We can hardly wait until they start spinning a “Biden electoral lock”. It has to be a strategy to counter the enthusiasm of Trump voters.

For, example, the CNN poll out today is another skewed anti-Trump poll of only 25% Republican. It’s a poll of 1,259 adults – not even registered voters, let alone likely voters. Also, it was done between June 2nd and 5th, before the great economic news from last Friday. In their questionnaire between asking about your job approval and the ballot, they had questions on issues including race relations, not job creation, which could have biased the poll further. It appears that the CNN poll is biased in both sample and questionnaire design to manufacture an anti-Trump outcome.

Specifically, the NBC/WSJ poll on Sunday was among registered voters, not likely voters, and is only 26% Republican. Again this shorts Republicans about 7 points from the 2016 exit polls which had 33% Republicans. This poll was done May 28th through June 2nd and would not have a Friday’s great jobs impact.

The refusal to screen for actual likely voters is creating an under-polling of Republicans and therefore Trump voters. It seems intentional. It’s exactly what the media did in 2016. Let’s prove them wrong again.

As McLaughlin states, this is exactly the same tactic deployed by the Dems in the 2016 campaign on behalf of Hillary Clinton.

This is where we are headed, folks. Try to stay safe and get out and vote in November. 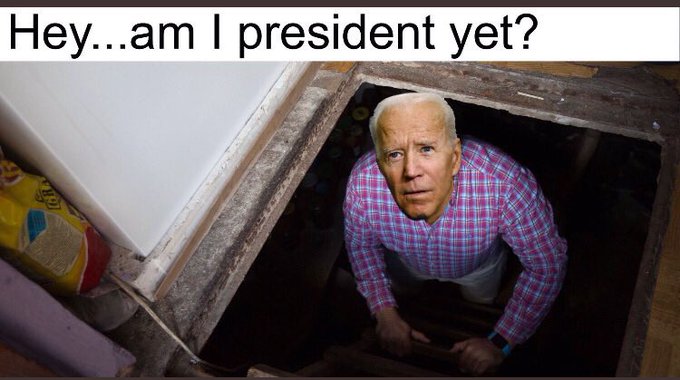 Democrats in Action!  Part I – The Daily Caller reports this morning that an admitted pedophile who once threatened to assassinate President George W. Bush is now an “independent” congressional candidate thanks to the efforts of despicable former Virginia Governor and long-time Clinton bag man Terry McAuliffe.

“Nathan Larson is an independent candidate in Virginia who admitted to HuffPost that he’s a pedophile who bragged in blog posts about raping his ex-wife and fantasized online about having sex with young children.

Larson was sentenced to 16 months in prison in October 2009 for threatening to kill the president.”

Virginia law cancels voting rights for convicted felons, but McAuliffe, in a desperate effort to fix the 2016 election in his state for the Pantsuit Princess, issued an executive order in 2016 restoring voting rights to more than 10,000 convicted felons in the state, most of whom he obviously expected to vote Democrat.  Gee, wonder why?

So now Larson’s running for Congress thanks to the despicable actions of a despicable man.  Way to go, Democrats!

Democrats in Action!  Part II – Speaking of Virginia Democrats, some guy named Dan Helmer is running for congress in the state’s 10th congressional district against incumbent Republican Barbara Comstock.  Although completely overshadowed by all the hysteria surrounding Roseanne Barr and Samantha Bee, Helmer’s new TV ad created controversy yesterday because it equates the current President of the United States to Osama Bin Laden.

I would say this is a new low for Democrats, but is it really?  They’ve gone so low so many times that it becomes almost impossible to tell anymore.

One thing is for sure:  Virginia’s Democrats are just loading up the November ballot with scumbags, which they obviously believe is the right strategy for appealing to the state’s voters.  Hey, they voted for McAuliffe twice, so sound legit to me.

Democrats in Action!  Part III – Famed liberal poll analyst Nate Silver, who was hilariously wrong about every.  little.  thing during the 2016 election campaign, has a post up on his website this morning titled…wait for it…”Which Pollsters to Trust in 2018.”  I swear I don’t make this stuff up. Who could?

Tired of all this Winning yet? – President Donald Trump issued a pardon on Thursday for conservative film-maker Dinesh D’Souza, in an obvious jab at both former U.S. Attorney Preet Bharara (who Trump fired) and former FBI Director and current teenage drama queen James Comey (who Trump also fired).

D’Souza had been made an example of by the corrupt Obama Justice Department and FBI after he had produced a film critical of America’s Biggest Mistake, Mr. Obama.  Bharara and Comey’s FBI turned D’Souza into a literal political prisoner for having contributed $20,000 to a New York political candidate, allegedly exceeding the contribution limits by encouraging others to also contribute.  The filmmaker plead guilty after Bharara had Comey’s agents raid his home and threatened to add additional charges for the same alleged actions that could have resulted in 5 years in federal prison.

In other words, Bharara was using exactly the tactics that Special Counsel Robert Mueller used to browbeat General Mike Flynn into his guilty plea last November – do it, or we’ll completely destroy your life.  This is Gestapo stuff, not anything that should happen in America.  But don’t kid yourselves:  it happens all the time.

Talking to reporters later in the day, the President speculated he might also pardon Martha Stewart, who then-FBI Director Mueller’s thugs also browbeat into a guilty plea for lying to investigators in 2004.  You may have thought the home designer served her 5 months in prison for “insider trading” – the allegation that led to the FBI’s inquisition of her, but you’d be wrong.

Curiously – and somewhat hilariously – the President also speculated that he might even pardon former Illinois Governor Rod Blagojevich, who was sent to prison for allegedly selling the senate seat Obama vacated in 2007 to the highest bidder.  Fans of the Celebrity Apprentice will remember that Blago actually was a contestant on that show while he was awaiting trial.  Since his conviction, evidence of FBI thuggery and prosecutors withholding of exculpatory evidence have come to light, which should at this point surprise absolutely no one with actively firing synapses in their brain.

The U.S. Attorney in that case?  Patrick Fitzgerald, the infamous Bush-era Special Counsel who basically framed Scooter Libby, who, by the way, Trump also pardoned a few weeks ago.  The FBI Director at the time?  First Robert Mueller, later James Comey.   So that case is a two-fer.

Just another reason to be thankful that Democrats only control 15 governor’s offices these days.