The tide is turning now, folks. You can feel it in your bones, and you can see it in the shift of focus by the corrupt national news media. The American Taliban, aka Antifa and BLM, is being pushed back, its energy fading, its efforts to topple monuments failing and its major monument to cultural Marxism soon to be dismantled.

That monument to cultural Marxism would be the so-called CHOP area in Seattle, where violent rioters seized control of six city blocks in the Capitol Hill area with the help of members of the city council and Mayor Jenny Durkin, who ordered her police to stand down as the department’s 3rd precinct building was taken. After shooting incidents over the weekend that left one dead and two lying near death in a local hospital, Durkin, who spent the previous three weeks celebrating and supporting the violent juvenile delinquents in the CHOP, announced on Monday that the city would begin to dismantle the atrocity today.

The energy behind the nationwide protests and riots staged and instigated by the American Taliban has also obviously faded, as an increasing number of the guilty parties are being arrested and charged by local and federal law enforcement. It turns out that the masked dopes dressed in black Antifa outfits love to create havoc when the local Democrat mayor assists them by having their police stand down while they do their looting and burning, but they quickly turn into pathetic cowards when they see their leaders and cohorts being arrested and placed at risk of serving long prison sentences.

Even better, the dimwit Talibanites in New York City are now turning on their own, last night staging a major protest outside Gracie Mansion, where Marxist New York Mayor Warren Wilhem, aka, Bill de Blasio resides:

VIDEO: The honking protest at Gracie Mansion is now a street protest with speeches. Folks. It is not yet July. Long summer ahead. pic.twitter.com/UHkJgaVNNW

You gotta love that.

But it gets even better. After weeks of tearing down various monuments in Democrat-run cities without any pushback from neutered police departments, a group of Antifa thugs made the mistake last night of trying to take down the famous statue of Andrew Jackson in Lafayette Park across the street from the White House.

These rioters may have had the tacit approval of DC Mayor Muriel Bowser, but they lacked the approval of the U.S. Park Police and other federal law enforcement officials who quickly arrived at the scene and put the action down:

Protesters and police actively fighting with each other. Protesters weren’t able to tear down the statue of President Andrew Jackson (police have pushed them back) pic.twitter.com/uXR3FZFjUB

The monument to Old Hickory still stands, and the rioters limped away from the scene after vandalizing St. John’s Church one more time, an action that has become passe’ and which few Americans even care about anymore since the Episcopal Bishop revealed herself to be an active part of the resistance after the church almost burned to the ground a few weeks ago.

Everywhere you look, the American Taliban is losing steam. They attempted to set up another CHOP area last Friday in Seattle South, which we Texans still refer to as Austin, but that failed as well when the Austin police refused to allow them to seize the department’s downtown precinct building.

Everything they try now is failing. Add that to the fact that ordinary Americans who initially knee-jerked to support BLM’s cause are increasingly becoming repulsed by their violent and excessive actions, along with the revelation that the group’s founders brag about being “trained Marxists.”

During his speech at the Tulsa rally on Saturday, President Trump remarked that he thinks we’re better off just sitting by and watching these Democrat mayors and governors fail. That has been his approach all along, as it has been obvious that the Democrats and their Taliban wing have been desperately trying to goad him into overreacting and ordering in the troops.

That approach of letting the Democrat state and local leaders fail on their own is now being rewarded with the Taliban’s movement now fading out with a whimper instead of its hoped-for violent confrontation with federal law enforcement.

As I pointed out last week, America is not falling apart, as much as the corrupt news media and Democrats would love you to think it is. Though it has been hyped by the media and its fake polls as somehow representing the majority sentiment all over the country, the agitators and rioters you have seen on your TV screens for the past month are really just a tiny sliver of our society.

What America has witnessed over the last month is what our country would look like under a Joe Biden presidency, and you can bet that a constantly-increasing number of voters are waking up to that reality as you read this.

Remain calm and live your lives. The good guys are winning.

280-character Book Reviews, By Donald J. Trump. – The President of the United States posted this free book review on his Twitter account overnight.:

Wacko John Bolton’s “exceedingly tedious”(New York Times) book is made up of lies & fake stories. Said all good about me, in print, until the day I fired him. A disgruntled boring fool who only wanted to go to war. Never had a clue, was ostracized & happily dumped. What a dope!

Ok, then, I think I’ll forego this one and read the new Michael Connelly novel instead. Thanks.

The National Security Council that Bolton himself formerly led also weighed in on the book with this statement last night:

NSC has determined that the manuscript in its present form contains certain passages—some up to several paragraphs in length—that contain classified national security information. In fact, the NSC has determined that information in the manuscript is classified at the Confidential, Secret, and Top Secret levels. Accordingly, the publication and release of The Room Where it Happened would cause irreparable harm, because the disclosure of instances of classified information in the manuscript reasonably could be expected to cause serious damage, or exceptionally grave damage, to the national security of the United States.

In case you missed it, the LA Times reported yesterday that the Department of Justice is apparently contemplating the filing of criminal charges against Bolton given that he decided to go ahead with the book’s publication without completing the required vetting process involving the NSC, the DOJ and the Pentagon. Those “high-level discussions” apparently go all the way up to Attorney General Barr himself.

Should DOJ move forward with such charges for revealing classified intelligence, millions of Americans will wonder why similar charges have yet to be pursued against Democrats like Hillary Clinton, Huma Abedin, James Comey and Andrew McCabe, among many others. Still, filing against someone, anyone would be welcome progress.

Well, hey, this should make Barr’s decision even easier. – For its own part, the book’s publisher, Simon and Schuster – which appears to be the go-to publisher for Deep State hacks like Bolton – says the genie is already out of the bottle here in terms of halting the book’s publication: 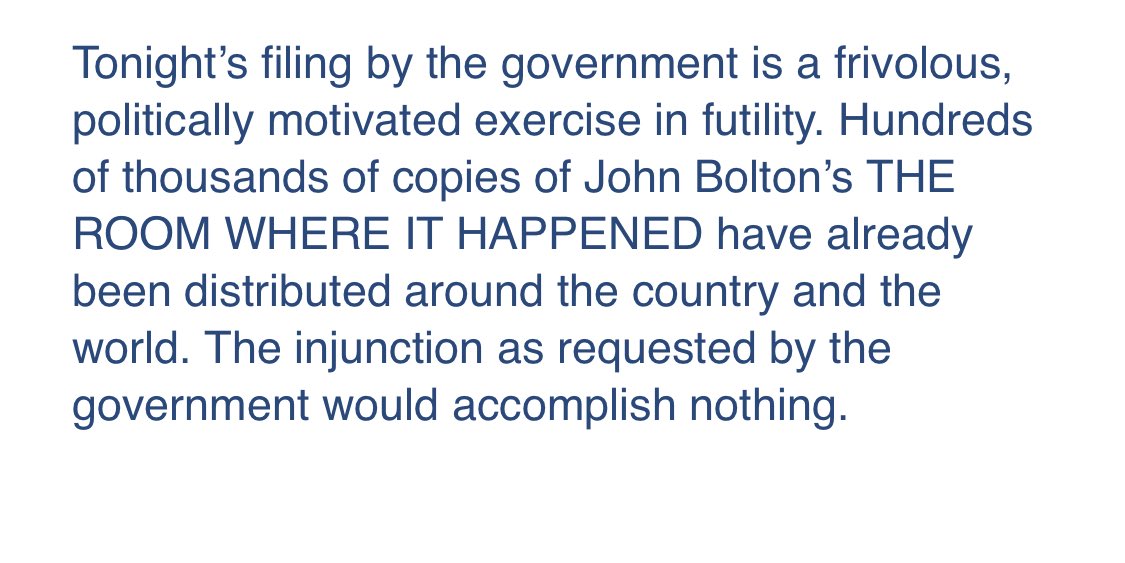 Ok, so, criminal charges it is, then. Or at least, it should be. We’ll see.

As you watch the hyperbolic fake news coverage of Bolton’s book, remember this John Bolton clip from 2010:

John Bolton in 2010: "If I had to say something I knew was false … I would do it." pic.twitter.com/kXbBzFEADv

Because Republican Black lives don’t matter to Black Lives Matter. – Check this out…

That’s the kind of racist crap you have to deal with if you are a Black person who holds to conservative values. Durbin later claimed his remark was a mere slip of the tongue and offered a Clintonian non-apology apology, but nobody really believes that. Durbin is a guy who never utters a public word that hasn’t been vetted with a focus group. But hey, he’s a Democrat, so being an overt racist is ok.

CORONAPANIC UPDATE: Thus far in Texas, 2088 residents have had their deaths attributed to COVID-19, which we all know is a highly inflated number. By comparison, during the 2019-2020 Season for the common flu and pneumonia, Texas has recorded 8,157 deaths due to those respiratory illnesses according to the state’s Department of Health and Human Services.
That’s 8,157 deaths for which no one screams we must wear a mask or stay at home, vs. 2,088 deaths about which everyone screams.
We are officially insane.
This concludes your CORONAPANIC UPDATE for today.

Anyone who has ever visited Vegas knows that it is just a matter of time before someone puts up a neon sign that reads “Old Vegas Faithful,” and starts collecting resort fees, parking fees and COVID-19 surcharges. Then they’ll start taking bets on how long the man-made geyser lasts, with the House taking 6% of the proceeds as its cut. If this were 1980 again, a third of the house collections would then be skimmed and sent back to the Kansas City and Chicago mobs, with another small share going to Harry Reid and the other members of the Nevada Gaming Control Board.

Quick, somebody tell me the difference between today’s Democrats and their BLM/Antifa mobs and the Taliban, because I’m not seeing one. – The war on history and monuments to history continues in California, where the Democrat-dominated state assembly just voted to remove a statue of Christopher Columbus from the state capitol building.

From a report at Breitbart:

Christopher Columbus is a deeply polarizing historical figure given the deadly impact his arrival in this hemisphere had on indigenous populations. The continued presence of this statue in California’s Capitol, where it has been since 1883, is completely out of place today,” It is unclear when the statue will be removed from the state building.

The decision comes as left-wing activist groups, including Black Lives Matter, and Democrat lawmakers have called for historical statues to be taken down in the wake of the death of George Floyd, a black man who died while in police custody in Minneapolis.

On Tuesday, a statue of Christopher Columbus was removed from a St. Louis, Missouri, park — Tower Grove Park — after commissioners who manage it voted in favor of the move.

The day prior, after a bust of Christopher Columbus was taken down in Detroit, Michigan, and placed in storage. On Friday, officials in Wilmington, Delaware — the town in which former Vice President Joe Biden resides — removed statues of both Columbus and Caesar Rodney.

How much longer before the book burnings begin? Asking for a friend?