The Perpetual Outrage Mob on Twitter is outraged again. – But now, in a dose of high irony, the Perpetual Outrage Mob (POM) has turned it’s ire towards the elderly Sock Puppet who was their hero just days ago. Such is the result of the POM learning that the reality of China Joe Potato Head Biden’s policy does not come close to matching the wild promises he and Kamala Lala Ding Dong made during their fake campaign.

First, the POM went berserk when it discovered that the “$2,000 checks” for COVID relief that China Joe and Kamala promised during the campaign had somehow been cut to just $1,400 in the draft bill sent over to congress by the Sock Puppet In Chief’s elder-abusing handlers. The outrage was especially focused among the nitwit Democrat voters of Georgia, who had been sold that bill of goods in the senate special elections there.

From a story at Fox News:

Georgia Democrats have reportedly already begun fuming over their two new senators, the Rev. Raphael Warnock and Jon Ossoff, who were sworn in Wednesday by Vice President Kamala Harris, according to a new report.

Both men narrowly won hard-fought races against Republican incumbents in the Peach State, winning control of the Senate for the Democrats in the process.

But a major issue raised by critics is that President Biden espoused a coronavirus relief plan that would send $1,400 checks to many Americans – while Warnock and Ossoff campaigned on a $2,000 promise.

“Warnock and Ossoff made it a point to endorse and exclusively say ‘$2,000 checks,’” Georgia Democrat Oscar Zaro told Mediaite. “A lot of the people in my district voted blue in the runoff for two main reasons. One: Loeffler and Perdue denying us relief during COVID while profiting millions themselves; and two, $2,000 checks.”

Leading into the Jan. 5 runoff elections were a series of campaign events espousing the $2,000 stimulus check proposal in the days after former President Trump signed a $600-check plan in late December.

Funny how that works, huh?

Then came the POM’s outrage over the fact that it turns out that neither China Joe nor Kamala Lala have any actual plan to magically make the COVID-19 pandemic suddenly go away, despite having made constant false promises in that regard throughout their campaign:

I mean, golly, who could have possibly seen that one coming, right? Oh, wait, we saw that all coming right here at DBDailyUpdate, as we constantly warned readers that the “plans” to fight the China Virus that China Joe and Kamala were touting during the campaign were simply repeating the things the Trump Administration was already doing.

But the SJW’s and snowflakes who make up the POM weren’t paying attention, were they? Nope.

Then you have the angst among the anti-war crowd who thought they were voting for an anti-war candidate, completely ignoring the reality that Donald Trump was the single most anti-war president since our great-great-grandparents were riding around in horses and buggies. This segment of the POM is all verklempt at the realization that China Joe, who was an inveterate war-monger for the last half century in the senate and as Barack Obama’s vice president, is already cranking that perpetual war machine back up, having ordered additional U.S. forces into both Syria and Iraq during his first 48 hours in office: 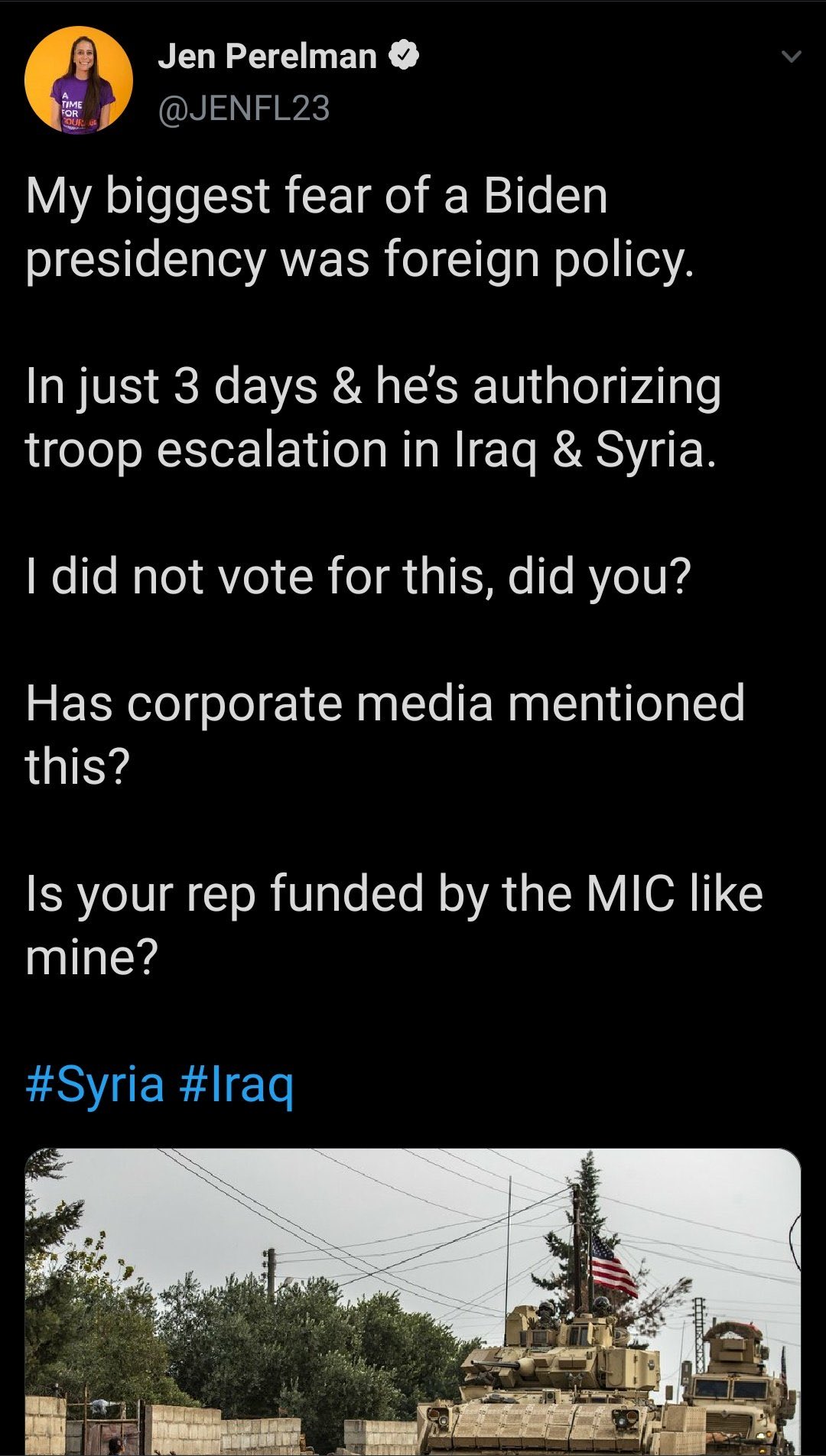 Yes, Jen, you did vote for that. You most certainly did, but were too damn dumb to understand that hard fact.

Today’s uproar among the POM has to do with China Joe’s consistent promises during the campaign to immediately raise the minimum wage to $15 per hour. How many times did we hear China Joe promise to “act on day one” of his administration to make that decade-long leftist goal a reality?

Naturally, hopelessly naive Democrat voters all over the country just assumed that China Joe meant he would immediately issue an executive order magically raising the minimum wage to that level as soon as he got up from his first nap in the presidential bedroom and enjoyed his evening bowl of tapioca pudding. But that’s not how the DC Swamp Kabuki Theater works, and never has been.

Biden did issue a symbolic executive order on Day 1 to raise the minimum wage for federal workers to $15, but virtually all of those workers were already making far higher than that level. What China Joe did for everyone else  – or rather, what his elder-abusing handlers did – was send over a proposal to congress that would pass the failed 2019 “Raise the Wage Act”, which would slowly raise the minimum wage to $15, but not get to that goal until 6 years after the passage of the bill, which means the lunatic leftist POM would not see its goal achieved until the year 2027, at the earliest.

You don’t have to believe me – here’s an excerpt from a story at BANKRATE:

Low-wage workers could see a boost to their pay for the first time since 2009, if former Vice President Joe Biden has his way.

The president-elect pledged in the run up to the pivotal 2020 presidential election that he would boost the federal minimum wage to $15 per hour, from its current level of $7.25. The U.S. labor market might be one step closer to that reality, after a Saturday projection showed Biden winning the race.

Policy analysts and experts say the quickest way to implement that policy might be to renew the “Raise the Wage Act,” which the House of Representatives passed back in July 2019.

If it were renewed in 2021, that piece of legislation most likely wouldn’t take effect until 2022, according to William Spriggs, chief economist at the American Federation of Labor Unions and Congress of Industrial Organizations. At that point, the U.S. economy would also be on more stable footing than it is today, according to Bankrate’s quarterly poll of economists. Even then, that proposal allows for a six-year-long phase in, with the $15 level not reached until six years after the bill is passed, according to the text of the bill.

“It would not be like flipping a switch and going to $15 tomorrow,” says Shai Akabas, director of economic policy at the Bipartisan Policy Center. “If consistent with other proposals and states that have phased in, it would be done in a graduated way.”

Now, think about this: Barack Hussein Obama His Own Self began advocating for a $15 minimum wage way back in 2009, and he and his trusty sidekick China Joe Potato Head Biden had 8 long years to get that done, but really never made any effort at all to do it. Why? Because they know the truth is that raising the federal minimum wage destroys jobs, millions of them.

When Obama began that false advocacy, the actual minimum wage was $7.25 per hour. Since 2009, many businesses, including examples like Amazon and Wal-Mart, have voluntarily raised their own minimum wages to that level for many or all of their workers. If you adjust that $7.25 per hour by the rate of inflation, it would very likely amount to more than $15 in real money terms by the year 2027.

But here’s the part that will really outrage the POM if they ever manage to figure it out using their fingers and toes: A $15 per hour minimum wage in 2027 will actually represent less real spending power for minimum wage workers than the $7.25 minimum wage represented in 2009.

That’s right: At the end of the day, China Joe Biden’s much-vaunted $15 minimum wage in fact will amount to a pay cut. No wonder Twitter is filled with tweets like this one from angry SJWs today:

3 days of the biden administration and they changed the $2,000 checks to $1,400 moved them to April, forgot the kids in cages, put Raytheon in the defense department, Pushed the $15 minimum wage too 2026 and for government workers only. "most progressive in history" my ass.

Again, Democrat voters who voted for China Joe Potato Head Biden had no idea whatsoever what they were actually voting for.