Meet the new Russia hoax, same as the old Russia hoax. – The Russia Collusion hoax was based entirely on a fraudulent dossier and lies told to reporters by anonymous sources. Well, and also by reporters just making crap up out of whole cloth in many instances, but that goes without saying. The Democrats and their corrupt media toadies managed to deceive the American public for three solid years and tilt the 2018 elections using that hoax, so it’s only natural they would repeat that same model in the runup to the 2020 elections.

Meet the new Russia hoax, this one claiming that President Trump was briefed on a plan by those evil Russians to bribe Afghanistan militants to murder U.S. and coalition forces in that sh*thole country (don’t even try to prove me wrong on that assessment), and that the President did nothing to stop them. The New York Times got the ball rolling on that doozy late last week with yet another fake report based on nothing but anonymous sources who may or may not even exist. You’re just supposed to trust that the New York Times, which has filed hundreds of completely false reports about President Trump since 2015, is finally telling you the truth this time, because of their journalistic “ethics” or something.

Even more, you’re supposed to believe the Times because other corrupt media outlets like the Wall Street Journal and Washington post “independently verified” the story – i.e., they talked to the same anonymous sources, who may well have been the reporter from the Times itself. Because that’s what these corrupt political operatives masquerading as journalists do.

As with this past week’s Bubba Wallace/NASCAR noose story, if you didn’t realize within about 10 seconds that both stories are clear hoaxes, then you just haven’t been paying enough attention to what’s been happening in our country for the past four years. But most Americans are too dense to figure it out, so the President and many of his people had to waste their time issuing outright denials of this false reporting on Saturday.

As reported by the Washington Examiner, former Director of National Intelligence Ric Grenell ended up in a back and forth on Twitter with despicable hack Ted Lieu:

Rep. Ted Lieu, a California Democrat, tweeted at Grenell daring him to confirm whether he did not tell Trump and Pence about a Russian military intelligence unit offering financial rewards to Taliban militants to kill U.S. troops or McEnany was lying.

“I never heard this,” Grenell shot back. “And it’s disgusting how you continue to politicize intelligence. You clearly don’t understand how raw intel gets verified. Leaks of partial information to reporters from anonymous sources is dangerous because people like you manipulate it for political gain.”

Lieu followed up by asking: “If you are telling the truth, why doesn’t White House deny bounty story instead of saying you didn’t brief @POTUS?”

Grenell replied: “All anonymous sources. And these same reporters gave us the Russian collusion hoax you still hold on to.”

"The White House statement addressing this issue earlier today, which denied such a briefing occurred, was accurate. The New York Times reporting, and all other subsequent news reports about such an alleged briefing are inaccurate.” (2/2)

The President of the United States tweeted this:

…Nobody’s been tougher on Russia than the Trump Administration. With Corrupt Joe Biden & Obama, Russia had a field day, taking over important parts of Ukraine – Where’s Hunter? Probably just another phony Times hit job, just like their failed Russia Hoax. Who is their “source”?

Even Vladimir Putin and Russia accurately referred to the New York Times as “fake news”: 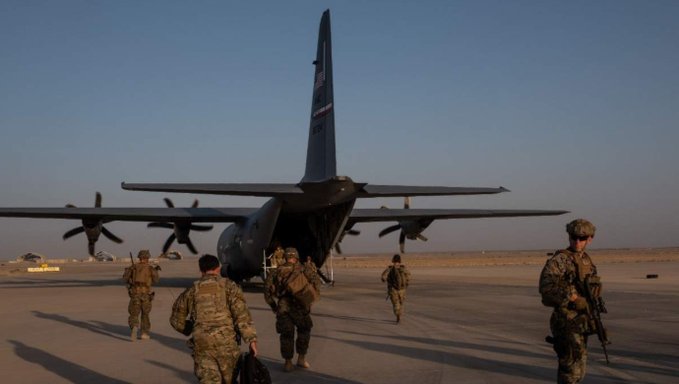 World news
Russia denies allegation that it offered bounties to militants in Afghanistan for killing American troops
According to The New York Times, American intelligence officials reported that a Russian assassination unit secretly offered bounties to Taliban-linked militants for killing American troops in Afghanistan. Russia responded by calling it an attempt to “invent new fake stories.”

So, you are left with either believing “news” outlets who have repeatedly lied to you and worked hand in glove with the Democrat Party to spread a series of outright hoaxes to the American public over the last four years, or believing the President, DNI Ratcliffe and Ric Grenell, who spent his entire time as DNI debunking the media’s previous Russia Hoax by declassifying documents and bring transparency in government.

So much for Russia, Russia, Russia. – Hey, remember when greasy Rod Rosenstein stood before the TV cameras and informed the nation that Gestapo Chief Herr Mueller and his band of Clinton/Obama thugs had found the source for all that “Russia collusion” that happened in our 2016 election? Yeah, good times, good times…

That was two and a half years ago, and in all that time, corrupt Justice Department prosecutors had made essentially no progress in the case, which in its essence alleged that a company called Concord Management and Consulting, LLC had spent a couple hundred thousand dollars on a bunch of social media ads designed to sow public division during the 2016 election cycle. Hell, Mini-Mike Bloomberg was spending 40 times that amount every damn day doing the same thing and no one from DOJ came after him.

But of course, the people at Concord are Russians and had no business trying to interfere in U.S. elections, regardless of how puny their investment allegedly was. And besides, the whole Mueller hoax was based on the myth of Russia colluding with the Trump Campaign, and Mueller’s thugs had to claim at least one Russkie scalp in order to keep the false narrative going.

So the disgusting Rosenstein stood there as the talking head for the American Gestapo, sniffing and slurping his way through his press conference, informing us that the brain trust of the evil Russian plot to waste $200,000 on Facebook ads and Twitter bots officed at the Moscow headquarters of Concord Managment, a firm no one in America had ever heard of. So, surely Americans would fall for the ruse, right?

Loyal readers here will remember that I told you on the very day Rosenstein held his presser that, even if Concord was guilty of what Rosenstein and Mueller’s thugs were alleging, a) their efforts made exactly ZERO difference in the 2016 presidential election, a fact that Rosenstein essentially admitted several times afterwards, and b) the DOJ would not be able to prosecute any charges against this Russian firm in any event unless the Russian government forced Concord to send its employees to America to face a judge and jury. Which was never going to happen, given the specious nature of the charges.

Well, guess what happened on Monday? That’s right: The corrupt DOJ lawyers who have bumbled and fumbled around with this idiotic case for a solid 30 months very predictably decided to drop all charges. Why? Well, golly, because they couldn’t get Concord or Putin to send any of those employees over here to face charges, and because DOJ decided it really couldn’t prove its case in any event.

From the Business Insider piece on the matter:

So, the “Russia, Russia, Russia” hoax ends with a whimper, an event that will be barely mentioned by the same corrupt journalists and TV talking heads who spent three solid years screaming about it from their lofty perches in their neverending effort to take down a President of the United States. It ends because, at the end of the day, it was in fact a complete hoax and the DOJ had nothing to work with.

But our society has been irreparably damaged by the volume and intensity of false information coming from Democrat politicians and our corrupt news media on the matter, just as it is being irreparably damaged by all the false information being purveyed by the media related to the coronavirus.  The saddest part of it all is that Attorney General William Barr has to this point issued zero indictments of any of the outlaw DOJ and FBI officials who carried out the hoax, and that no one in our corrupt news media will be held in any way accountable for their efforts to support the plot.

The best we can hope for is a pox – or perhaps a virus – on all their houses. That would be real justice.