Wondering where Biden’s Department of Justice will focus its efforts? – Well, wonder no more. Check this out:

I bet many of you didn’t know that our system has become so perverse in the 21st century that it is now illegal to show a hiring preference to American citizens. That’s right: Citizens of this country have no more right to jobs created and provided by American companies than citizens of, say, New Guinea or Uruguay.

From the story at DailyWire:

The U.S. Department of Justice is investigating Elon Musk’s SpaceX for allegedly preferring to hire American citizens over non-citizens.

According to the DOJ, in March 2020, a non-U.S. citizen inquiring about the position of technology strategy associate at SpaceX was asked about his citizenship status. DOJ attorney Lisa Sandoval stated that SpaceX “ultimately failed to hire him for the position because he is not a U.S. citizen or lawful permanent resident.”

IER emailed SpaceX on June 8 that an investigation was underway and asked SpaceX to hand over information and documents related to its hiring and employment eligibility verification processes. The letter stated, “IER’s investigation is not … limited only to the specific allegations and/or claims that [the Charging Party] made in the charge summarized above. Our investigation therefore may also explore whether [SpaceX] engages in any pattern or practice of discrimination that 8 U.S.C. § 1324b prohibits.”

Not only are Joe Biden and his DOJ not planning to continue Donald Trump’s “America first” philosophy, they are going to actively seek to prosecute anyone who does. More than that, they will investigate you under a criminal statute if you even ask an applicant about his or her citizenship status.

Want to know what the focus of Joe Biden’s DOJ is going to be? If you’re an American citizen in good standing, it’s going to be on you.

Think NewsMax is some sort of real alternative to Fox News? – You might want to reconsider that notion after watching this:

Mike Lindell tried to talk about Dominion voting machines on Newsmax — and it did not go well pic.twitter.com/umJebG2QAX

NewsMax has been fully assimilated by the Borg. Don’t kid yourself otherwise.

Whether you believe what Mike Lindell is saying or not, the behavior of that host is despicable, and his repeated reference to and reading of that lawyer-written canned statement clearly demonstrates that NewsMax is no place for free discussion and debate. Just like Fox.

Tuesday was a really bad day for Jen Psaki. – The least qualified press secretary in history continued to flail about in her job yesterday, at one point making a despicably demeaning remark about the U.S. Space Force, for which she was later forced to issue a tweet of apology:

White House Press Secretary Jen Psaki faced backlash on Tuesday after she appeared to mock a branch of the United States Military during a press conference, which sparked calls that she needed to apologize for her “disgraceful” comment.

Psaki was asked about what Democrat President Joe Biden’s plans were regarding the Space Force, including whether he wanted to keep the new military branch.

“Wow. Space Force. It’s the plane of today,” Psaki responded. “It is an interesting question. I am happy to check with our Space Force point of contact. I’m not sure who that is. I will find out and see if we have any update on that.”

Psaki’s comments are an apparent reference to previous questions from reporters about whether the Biden administration would change the colors on Air Force One.

“It’s concerning to see the Biden administration’s press secretary blatantly diminish an entire branch of our military as the punchline of a joke, which I’m sure China would find funny,” Rogers said. “The Space Force was passed with near unanimous support in Congress, the same type of ‘unity’ President Biden is supposedly working towards. Jen Psaki needs to immediately apologize to the men and women of the Space Force for this disgraceful comment.”

And so, she sort of apologized with her subsequent tweet.

Psaki also found herself in a bit of hot water on Tuesday when an LGBT website called “getoutspoken.com” found and published a snarky tweet she wrote last August that implies Sen. Lindsey Graham is a closeted homosexual: 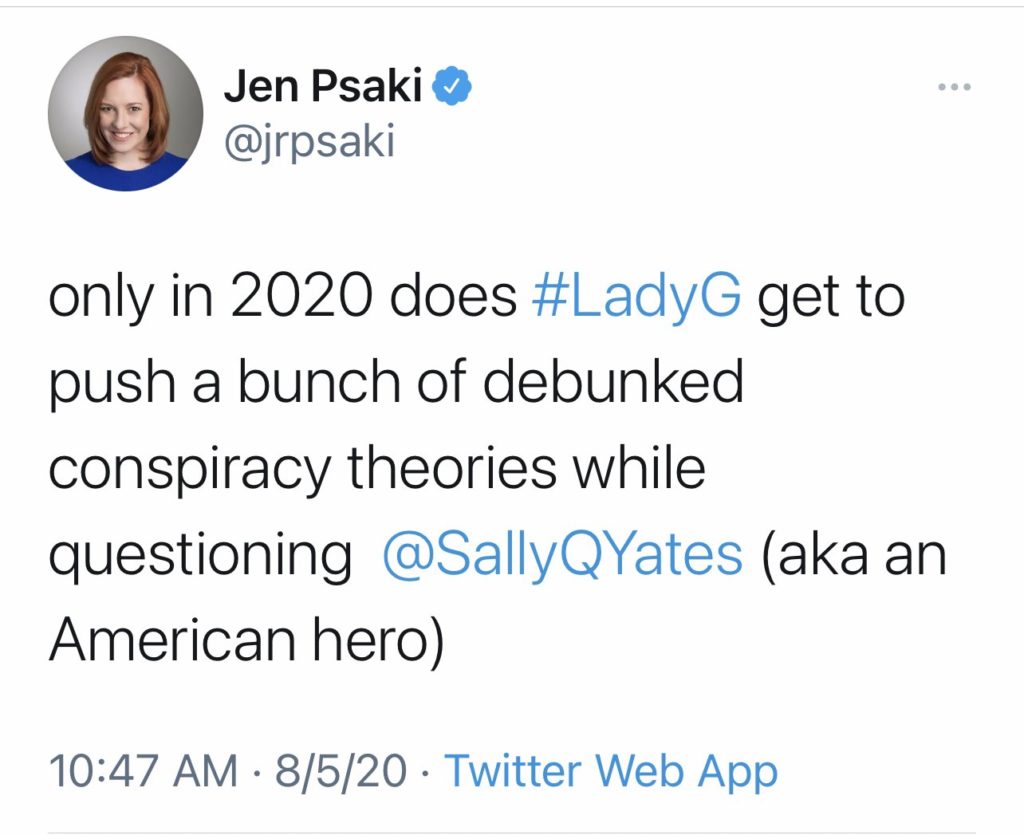 GetOutSpoken went on to say:

The tweet appears to raise serious questions about how Democrats, particularly heterosexual liberals like Psaki, feel emboldened to demean, harass, and mock LGBT conservatives specifically for their sexuality–behavior they would never consider exhibiting toward other LGBTs.

The tweet also raises concerns over the ethical question of publicly “outing” closeted people as LGBT, a shameful and demoralizing practice that has led to suicide and other tragic results.

On Aug. 5, 2020 while South Carolina Sen. Lindsey Graham questioned former Deputy Attorney General Sally Yates about the fraudulent Russia investigation, Psaki wrote on Twitter, “only in 2020 does #LadyG get to push a bunch of debunked conspiracy theories while questioning @SallyQYates (aka an American hero).”

So, here we see yet another in a long, long line of examples of a leftist public figure expressing her bigotry against gay people. This is nothing new, and is obviously in fact a feature of leftist philosophy – that any LGBT person who is not reliably leftist in their political views deserves public outing and humiliation.

In case you hadn’t noticed, leftists hold and regularly display similarly bigoted attitudes towards Blacks and Hispanics who do not share their political views.

Leftwingers are in fact the true last bastion of disgusting bigotry in America. The guy they just elevated to the White House has a half-century-long history of making bigoted remarks and telling bigoted jokes in public settings that can still be seen and heard in dozens of clips all over the internet.

This is who leftists are – it is their nature. The only wonder with this story about Psaki is that anyone at GetOutSpoken was surprised.

Ok, so, now they’re going after the My Pillow guy. – The rank hostility towards – and obvious fear of – Christianity by the leftwingers in the corrupt news media is really stunning. It was on clear display all over Twitter yesterday evening, after President Donald Trump (I still never tire of typing those three glorious words) let Mike Lindell, commonly known as the “My Pillow Guy”, come to the mike and talk about the wonderful work his company is going for our country right now.

For those who are not aware, the My Pillow company has converted one of its factories into an operation manufacturing face masks for hospital workers. It will be cranking out 50,000 of them every day by the end of this week. In other words, Mr. Lindell is actually doing something real to help fight the Wuhan Virus, unlike literally anyone in our fake, corrupt news media.

Seriously, as President Trump is donating his entire salary to the fight against this virus, and all of these various corporate giants in the business world are stepping up to quickly convert factories into manufacturing all of this critical equipment and supplies, have you heard or seen a single news report about any of the multi-multi-multi-millionaires in the news media doing a damn thing to contribute to the cause?

What really set everyone off was Lindell’s act of talking about Christian values and the Bible and prayer at the end of his remarks:

“God gave us grace on Nov. 8, 2016 to change the course we were on,” Lindell said, in reference to the night Trump won the election. “God had been taken out of our schools and lives, a nation had turned its back on God.

“I encourage you to use this time at home to get back in the word, read our Bibles and spend time with our families.” The New York Post reports that he then touted the economy and the unemployment numbers from Trump’s time in office.

“With our great president, vice president, the administration and all the great people in this country praying daily, we will get through this and get back to a place that’s stronger and safer than ever.”

That immediately set the blue-check corrupt journalists on Twitter off in a fit of outrage and ridicule. Within 30 minutes of his comments, Lindell was trending on Twitter under three different Twitter categories: #MyPillowGuy, “Mr. Pillow,” and “My Pillow,” as every leftist user on the site joined the corrupt national press corps in piling on.

Literally none of those people engaged in that activity are doing a damn thing to help our country right now, and most are actively harming the effort. The folks at Twitchy.com did a great job of compiling much of the media-led outrage at this link.

Of course, all of these people hated Mr. Lindell before yesterday. He is, after all, a great example of the American dream: A self-made guy who, after going through years of drug addiction, found God, got his life in order and created one of the most successful business enterprises in the country. Corrupt reporters and editors hate that stuff.

They also hate the fact that he was an early and vocal supporter of the Trump presidential campaign in 2016, and they hate the fact that Lindell proudly wears his religion on his sleeve. Lindell represents everything, every traditional American value, that they spend their days coordinating with the Democrat Party to destroy.

Of course they hate him.

Which, of course, is why we love him.