Today, President Donald Trump called the Iraqi government’s bluff, authorizing the commanding general of joint coalition forces in Iraq to send a formal letter to the Iraqi commanding officer notifying him of pending operations for coalition forces to depart from Iraq. This comes in the wake of the vote of the Iraqi parliament over the weekend to demand U.S. forces leave the region.

Here is a photo of the letter that is circulating on social media: 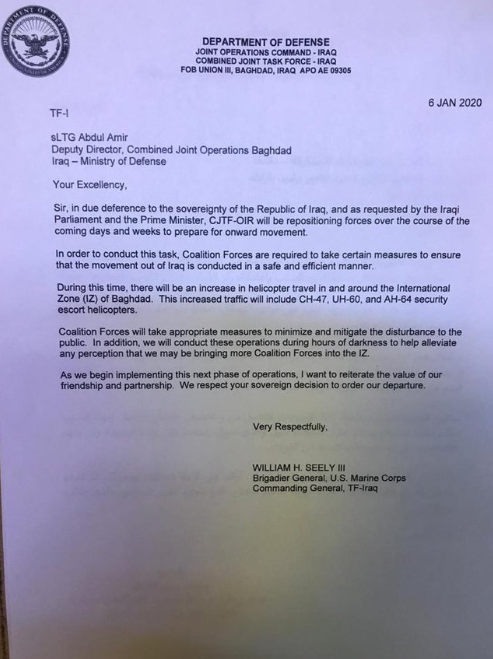 Sir: In due deference to the sovereignty of the Republic of Iraq, and as requested by the Iraqi parliament and Prime Minister, CTJF-OIR will be repositioning forces over the coming days and weeks to prepare for onward movement.

In order to conduct this task, Coalition Forces are required to take certain measures to ensure that the movement out of Iraq is conducted in a safe and efficient manner.

During this time, there will be an increase in helicopter travel in and around the International Zone (IZ) of Baghdad. This increased traffic will include CH-47, UH-60 and AH-64 security escort helicopters.

Coalition forces will take appropriate measures to minimize and mitigate the disturbance to the public. In addition, we will conduct these operations during hours of darkness to help alleviate any perception that we may be bringing more coalition forces into the IZ.

As we begin implementing this next phase of operations, I want to reiterate the value of our friendship and partnership. We respect your sovereign decision to order our departure.

As we have repeatedly pointed out here at the Campaign Update, one of the main reasons why Donald J. Trump was elected to the presidency in 2016 was his promise to get U.S. armed forces personnel out of the myriad interminable Middle East conflicts into which his predecessors in office had gotten our country entangled.

Trump’s basic message during the campaign was that these wars between various Islamic countries and factions have been going on for eons, and nothing the U.S. can do – no amount of treasure or lives sacrificed – will end that reality. So, let the Islamic states in the region fight it out amongst themselves, and focus U.S. military efforts in the Middle East on protecting our assets and few real allies there – Israel and Saudi Arabia, mainly.

The Iraqi parliament’s demand over the weekend, whether serious or not, plays directly into the President’s hands in this regard.

It is also key to note that this strategic gambit would not be possible were it not for the fact that the U.S. today enjoys a much higher level of energy security than it did during past presidencies, thanks mainly to the shale oil and gas revolution that has taken place here over the past decade. The U.S. is not completely energy “independent” and probably never will be, but our country today has very little compelling national interest in risking American lives and treasure to keep the oil spigots in countries like Iran and Iraq open.

So, this letter from Brig. General Seely now puts the ball squarely back in the Iraqi government’s court. President Trump has basically said, hey, if you want to become a client state of the mullahs in Iran, go for it.

It will be interesting to see how Iraqi Prime Minister Adil Abd Al-Mahdi responds.

UPDATE: Well, maybe it’s not quite goodbye after all. Here is an official Pentagon statement on the matter:

There has been no change in US policy with regard to our force presence in Iraq. We continue to consult with the Iraqi government regarding the defeat-ISIS mission and efforts to support the Iraqi Security Forces.

We remain committed to the D-ISIS coalition and ensuring a safe, secure, and prosperous future for the Iraqi people.

Joint Chiefs of Staff Chairman Mark Dilley earlier stated that the letter is real, but the version released on social media is a “draft” that should not have gotten out. Prior to that Defense Secretary Mark Esper said that the letter was not real.

Did someone just get caught in a mole hunt?

I will update this story if the official version keeps changing.

That is all. For now.

Remember those Republicans who supported Nancy Pelosi and betrayed the American voters with this vote. – I have very often been thoroughly disgusted with the behavior of spineless, disloyal Republicans in the U.S. Congress, but seldom as disgusted as I felt on Wednesday afternoon.

That was when we got news that 129 Republican members of the U.S. House of Representatives joined with Nancy Pelosi and the Democrat caucus in a vote to condemn President Trump’s decision to pull U.S. military personnel out of harm’s way as the Turkish military invaded Northern Syria on Sunday. That decision involved about 50 U.S. military advisors who would have otherwise been trapped between the Turkish and Kurdish forces, and another 1,000 or so U.S. personnel who were already well away from the front.

This vote was a shameful act, and I’m frankly embarrassed to see the names of Texans like Kevin Brady, Dan Crenshaw and John Ratcliffe on the list of “yea” votes for this despicable, non-binding resolution. Here is why these were shameful votes: The U.S. Constitution grants Congress the sole power to declare war on another country. If these posturing, blustering politicians truly feel so horrified by the President’s decision to keep our country’s military personnel safe, and so strongly about siding with the Kurdish forces – who, by the way, regularly make incursions into Turkey against U.S. advice – then they need to man-up and hold a vote on a declaration of war.

Doing what they did on Wednesday is simply political posturing designed to allow them to go tell their voters that they bravely defied the President in a vote that in reality does nothing but provide political support for the Democrat Party. It’s disgusting, and I had hoped that I would not see the three men listed above – whom I have held in high regard – engaging in this sort of political cowardice.

Most Americans have no regard at all for Turkish President Recep Tayyip Erdoğan, who is a despicable, brutish thug. But the centuries-old conflict between the Turks and the Kurds is every bit as unsolvable as all the myriad other centuries-old conflicts involving various peoples and religious factions in the Middle East. These conflicts existed long before the United States of America was born, and will persist long after the Democrats succeed in dividing the U.S. into two or more separate nations.

They are, in other words, not our problem, and if the last 28 years have taught us nothing else, they should have taught every American that neither our country nor any other nation on earth, no matter how well-intentioned or powerful, is capable of resolving them peacefully. All we are capable of doing is ensuring the ongoing killing takes place in a reorganized fashion.

Donald Trump was elected to the presidency in large part to get our military personnel out of the middle of never-ending conflicts like this one, and that is what he decided to do on Sunday.  He inherited a set of quagmires from his four predecessors in office, holding a mandate from the voters to get our country out of them.

For members of congress, for warmonger John McCain disciples like Lindsey Graham, who are currently wringing their hands about the supposed “rebirth of ISIS,” the way to prevent that being a threat to America is to act on the other main reason why Donald Trump won the 2016 election and pass legislation designed to get control of our damn borders.

In other words, instead of going on Fox News and CNN to channel John McCain and lecture the President about “abandoning our allies,” Graham and Brady and Ratcliffe and Chrenshaw need to be going on those channels and others to pound the Democrats for abandoning the American people.

But that would take political will, something that is always in short supply among Republican members of congress.

Again, here is the link to the roll call on Wednesday’s show vote. Memorize those 129 Republican names, and if one of them represents your district, do something to let them know about your displeasure with yesterday’s abandonment of the American people. Because the 2016 election was a referendum on this very issue, and their side lost.