Getting tired of all this #WINNING yet? No? Expect more today. – The S&P 500 and NASDAQ indexes again closed at all-time highs on Thursday on news of a pending deal in U.S./China trade talks and news of a landslide win in the UK elections by Boris Johnson and his Conservative Party. The Dow Jones Industrials had reached an all-time high in late-day trading before falling back slightly at the close. All three indexes were poised to open at new all-time highs in pre-market trading.

Speaking of that vote in the UK… – As we noted back on November 29, the Conservative Tories had been poised to regain massive majority control of Parliament according to all the polls, and for once, the polls were right. Even the exit polls came close to getting it right, projecting a likely final Tory majority of 368 seats, just 4 away from the final official number of 364 of the chamber’s 650 total seats.

Johnson will now control a 78-seat majority, the largest for any party since the Margaret Thatcher-led election in 1987. Meanwhile, the largely communist “Labor” Party is left with a paltry 203 seats, its fewest since the election held in 1935.

Here are some examples:

All of that is reminiscent of wild election night 2016 predictions in the U.S. by hacks like the New York Times’s resident economist Paul Krugman that the U.S. economy would “never recover” from the Trump victory 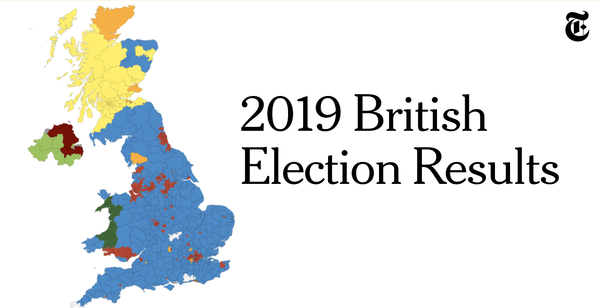 So, why did Johnson’s landslide happen now? Again, even that is eerily similar to the election dynamic building in the U.S. today. Simply put, the vast majority of Brits have grown weary of their wishes expressed in the resounding Brexit election win in 2016 being subverted by the Labor Party communists and globalist Conservatives, who have gone to extraordinarily-underhanded lengths to kill every Brexit plan that has come along.

Again, Americans, does that sound familiar?

In public life just as in private life, politicians reap what they sow. With their never-ending efforts to deny the American voters the fruits of their choice in the 2016 election, the Democrats are sowing the seeds of a blowout landslide in 2020.

I’m cool with that. You should be, too.

Addendum: And just like clockwork, the communist Laborites have created their own “resistance” movement, just like the communist Democrats did in the U.S. following the 2016 election:

This is literally a fight for the survival of free western democracies. Those on the radical left will never again accept an election defeat. They will fight to the bitter end. We must be prepared to do the same. Never forget that reality.