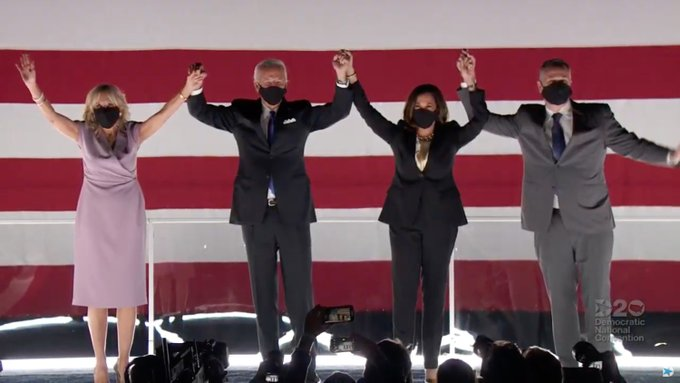 You had one job, and you couldn’t find even 30 real people? – The steaming pile of hammer and sickle nausea that is the communist Democrat fake Convention steamed through its third night, and here is all you really need to know:

Kamala’s applause live-stream was actually meant to be an accurate representation of 30 Democratic voters in New Jersey. pic.twitter.com/WfGecOScx0

That’s right: If you look at the circled faces, you will see they are all duplicates. It’s like the corrupt news media carefully snipping video to make it look like more than a dozen people showed up for a Biden high school gym rally.

Obviously, the ratings for this snoozer of a convention are low – down 48% from 2016 – but they’re not that low. But hey, everything the Democrat party does is a lie and/or a fraud: Why would this livestream for Kamala be any different?

In addition to the carefully-read speech by Kamala Harris, Wednesday night’s festivities featured predictably dishonest and unhinged diatribes from Barack Hussein Obama His Own Self, Faucahontas and the Fainting Felon, who is still blaming her 2016 loss on the Russians. At my house, we are already into Season 3 of Yellowstone, in which the mooing cattle and howling wolves make far more logical sense than any communist Democrat.

Tonight, the Party that gave us the Ku Klux Klan, Jim Crow laws and the Antifa/BLM domestic terrorist complex will present the nation with a nominee who is a career racist, has a long history of inappropriate behavior with women and children, and who is displaying obvious symptoms of advancing dementia.

He is, in other words, the perfect representative for the Democrat Party in the year 2020.

Wait, who’s enriching himself??? – Here was the real highlight, though: At one point, Obama accused President Donald Trump of using the presidency to “enrich himself.” Just a reminder that, when he assumed the office of the presidency, Barack Hussein Obama His Own Self was worth barely more than $1 million.

Obama’s net worth today is reportedly upwards of $100 million. At the same time, Donald Trump’s net worth has dropped by over $1 billion since the day he won the 2016 election.

But Trump’s the one who is “enriching himself” in the presidency. Riiiight.

These people are despicable. In fact, we should call them a basket of despicables.

Even Biden’s potential running mates are starting to lose patience with his inability form ideas into sentences. – Check out Elizabeth Warren actually rolling her eyes as Biden bumbles around to catch a thought that zooms into and out of his noggin:

Which brings us to this little nugget from Dan Bongino:

Not a joke and not hyperbole – I’m hearing from people close to the situation that Biden’s cognitive decline is rapidly worsening and is becoming increasingly difficult to mask. The Democrats are going to have to make a decision soon.

If you’re surprised by this, you are a new reader at Today’s Campaign Update. Given that their faux “convention” is just barely two weeks away, the Democrats obviously do have a huge decision to make where Biden is concerned. Do they draft Obama to go to his former Vice President and tell him the game is over and he must withdraw for the good of the Party? Or do they just brazenly tough it out with the Hidin’ Biden strategy and keep their “candidate” closeted up in his basement all the way through Election Day?

Many people think that drafting a new nominee and mounting a campaign with him or her would be a fairly simple thing, but it wouldn’t be. For one thing, there’s the money question. Biden has raised several hundred million dollars for his campaign, and that money is not transferable to a different nominee. Thus, a Hillary Clinton or Michelle Obama or Andrew Cuomo would have to basically start from scratch against an opponent, President Donald Trump, who has already raised over half a billion dollars for his own campaign.

Then there’s the question of how you mount a campaign without doing in-person rallies of any real size, and while refusing to debate your opponent. We have to understand that this factor is precisely why the Democrats have so fiercely fought to keep our economy depressed and shut down: They are perfectly willing to keep millions of Americans out of work and to destroy millions of small businesses if it means they have a rationale to deny the President his ability to conduct public rallies.

Will the public buy it when Biden says he refuses to debate the President because he might – gasp! – lie during a debate? Think about how independent voters, for whom these debates actually are staged every four years, would react to that excuse. It’s a giant risk for the Democrats to take.

But it may indeed be a necessary one for the Party to try. Biden has clearly declined rapidly over the past 16 months, and he was already obviously impaired when he entered the race last April. This is a man who cannot hold a simple press conference without holding a list of pre-selected “reporters” to call on, reporters who have been selected by Biden’s handlers because they have promised to avoid tough questions.

Biden struggles to read a short speech from a TelePrompter now, and is unsteady on  his feet. These are the major reasons why the Democrats have gone to such epic lengths to ensure that party conventions had to become virtual events. We should not be surprised if they even come up with some pretense for Biden’s virtual acceptance speech to be pre-recorded rather than a live delivery so that his gaffes can be carefully edited out.

With recent polling showing that Biden’s voter enthusiasm levels have tanked to historic lows not seen since the days of Walter Mondale, the Democrat/Media axis of disinformation is even going to find it increasingly difficult to keep rolling out the fake polls and have anyone believe them. There is increasing chatter at social gatherings and across social media about the dearth of Biden yard signs, bumper stickers and other campaign paraphernalia appearing anywhere in the country.

When people can see with their own eyes that literally no one they know is a Biden supporter, and their Democrat acquaintances laugh whenever his name is brought up, the pretense of fake polls showing him with double-digit leads loses any real impact. In fact, at this point it is safe to say that the media/pollster campaign to depress Trump voter enthusiasm has been an abject, miserable failure.

But here’s the thing about all of this: Biden has made it clear that he’s going to announce his running mate selection this week. Once he crosses that threshold, it becomes even more difficult for the Party to kick him off to the curb.

It’s a real conundrum for the party leaders, and the reality is that actually don’t have an alternative who is all that attractive. Abandoning Biden now, after all of the promises he has made to get the party’s various factions on board with his candidacy, would inevitably cause massive splits in the party’s demented voter base, with the new candidate having barely two months to try to bring them all back into the fold.

The Democrat convention begins on August 17, two weeks from today. Those two weeks are going to be incredibly interesting.