Guess what story won’t be the lead on CNN or above the fold on the front page of the New York Times this morning. – If you guessed “the special elections in two North Carolina congressional districts?”, you would be right: 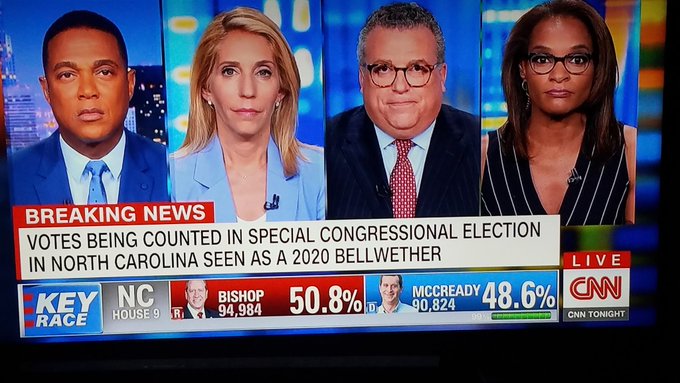 Why all the long faces, CNN?

The reason this story will now be downplayed and quickly dropped, of course, is that Republicans won both by comfortable margins. That was expected to be the case in congressional district 3, which is a very safe GOP district and where the Republican candidate was not burdened by any controversy, and the Democrats hadn’t poured millions of dollars in out-of-state money into the race. So, the 24-point winning margin by Republican Greg Murphy came as no surprise to anyone.

But CD9 was a different story. There, the Republican candidate, Dan Bishop, faced a huge influx of Democrat money coming in from New York and California to back Democrat Dan McReady, who had narrowly lost the race to another Republican, Mark Harris, in 2018. But Harris became the rarest of rare animals in U.S. politics – a Republican who got caught committing voter fraud in that race.

North Carolina elections officials ruled that the seat would remain unfilled until a special election could be held. Our fake national news media, led by CNN and the NY Times, eagerly anticipated what they all felt would be a Democrat win for McReady in CD9. Surely, they all reasoned, reciting the exact same DNC-approved talking points each and every day for the past month, the burden of the evil Orange Man in the White House and the scandal left behind by Harris would be too much for Bishop to overcome. Surely, McReady would be able to find enough voters in the district’s cemeteries and bus in voters from other states to win the day.

But no, in the end, even though the final polls in the race showed McReady even or with a slight lead, Bishop prevailed by almost 4,000 votes. The final blow in Bishop’s favor seemed to be the decision by President Donald Trump to fly in on Monday night and hold a raucus rally to boost voter enthusiasm for Bishop.

So today, you will see some perfunctory reporting on the results of these two Republican victories, and then the fake news media will drop the story like a hot potato. Because that is what our fake national news media does.

For the GOP, the outcomes of these two races represents very encouraging news. North Carolina has been trending in a bad direction for the past 20 years, as it has become a favored landing spot for New Yorkers fleeing the confiscatory tax policies of that state. All of the “experts” based in New York and D.C. fully expected that trend to continue in these races.

But what we saw instead is very troubling news for the Democrats and their media toadies. One big example came in Cumberland County, home of the city of Fayetteville. In 2016, that was a Democrat stronghold, with Hillary Clinton winning it by 16% of the vote over Donald Trump. On Tuesday, Bishop actually won that county by slightly less than 1%.

Robeson County, heavily-populated by the Lumbee Indian Tribe, went to McReady by 15% of the vote in 2018. Last night, Bishop came within 1% of actually winning the county, and the Lumbee-dominated precincts actually went to Bishop.

None of these results were expected in the DNC/Fake news media talking points, and help to explain all the long faces you saw if you watched the coverage on CNN and MSNBC last night. It was just one more race in which the polls were wrong, the “experts” were wrong and the talking points were wrong.

Couldn’t happen to a more deserving bunch of people.