On Friday, the sleazy Democrat governor and attorney general of Minnesota – Tim Walz and Keith Ellison – bullied the Trump campaign into limiting attendance at the President’s rally in Rochester to just 250 attendees. This is an issue the communist Democrats who run the state have not experienced with the Biden campaign, which never attracts more than a handful of supporters.

Mindless leftists will attempt to defend this move by the sleazy Dems using the China Virus restrictions as an excuse, but that’s a smelly load of horse manure. Neither Walz nor Ellison made any effort to control the crowds at the massive demonstrations and riots that took place in Minneapolis throughout the summer. Neither made the slightest effort to control the crowds of looters and arsonists and rioters that destroyed vast swaths of that once-great city, instead giving the death and destruction their tacit support.

Laura Ingraham made a solid point about the duplicity of Minnesota’s sleazy Dems:

Never forget @GovTimWalz allowed Minneapolis’s 3rd Precinct to be torched by rioters. But months later he made sure to prevent this man from attending a Trump rally. pic.twitter.com/aaFBuLKYXB

Undeterred, President Trump made a point of taking time to walk over to where the supporters who were not allowed in by Minnesota officials had gathered and refused to disperse, personally thanking them for coming and excoriating Walz and Ellison at the same time: 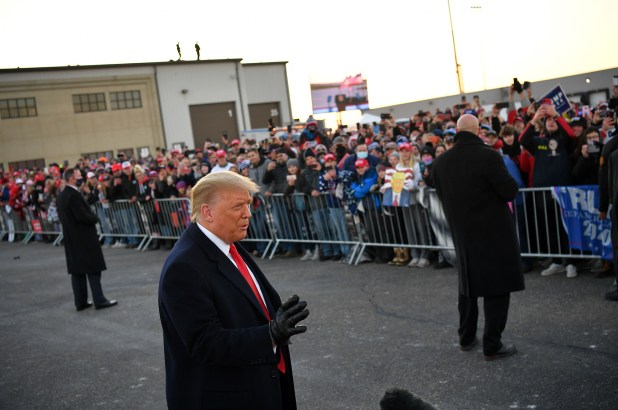 This is the kind of brutish behavior Democrat governors have used the China Virus as an excuse to engage in all over the country over the last six months.  Once this election is over, it is time for the Justice Department to get up off its collective fat ass and start defending our individual liberties. Enough.

The New York Post wins its fight against Twitter. – Just in time for it to be too late to have any impact on the election, Twitter finally relented in its censorship of the New York Post and reinstated its account on Saturday.

So we got that going for us.

And now, a message of hope from the Democrat Party’s Unfrozen Caveman China Traitor Candidate:

“America is dead.” There is your message of hope from the Democratic nominee. pic.twitter.com/JZ60NpIEh4

“America is dead.” That is the closing message to this campaign from your Democrat Party. Surreal.

Here is Creepy Joe McNastyFinger introducing his “dear friend” who he “served with for many years”, the senior Senator from Minnesota:

You just can’t make this stuff up, folks. Imagine – just imagine – how great Saturday Night Live could have been during this campaign if it was still a comedy show, and not just another propaganda bullhorn for the DNC.

Then there was this indecipherable moment:

If you know what trunalimunumaprzure actually, please let me and the Biden campaign know.

Ask yourself this while we’re at it: Why is Biden always yelling at his rallies? Why does he always look so damn angry? There’s only – on a really good day – two dozen people there. They aren’t excited, they aren’t raucus, they aren’t standing en masse doing chants like the thousands who attend Trump rallies.

Biden could easily be heard with no mic at all, yet every speech is delivered shouting, yelling, and with that “hey you kids, get off my lawn!!” expression on his face. Why is this man so angry? Is it just because his evil, elder-abusing handlers are making him get out of the basement and actually work some 8-hour days as the campaign winds down? Is it because he’s missing his daily 10:00 bowl of tapioca pudding? Are his sanitary diapers too tight?

Look at this clip – watch the anger on his face:

Joe Biden: "I've dealt with guys like Trump my whole life. So have you. Guys who think because they have a lot more money that they're better than you, look down on you." pic.twitter.com/adoE3qTa8K

Who do you think he’s talking about – what “guys like Trump” has Biden had to deal with during his lifetime of rank privilege and high office? Is he having flashbacks to Corn Pop? The secret is locked up in his own demented mind, so we will never know.

Has America ever elected such an angry, irrational man to the presidency? We don’t have film of any candidate before Teddy Roosevelt, so who knows about the candidates of the 18th and 19th centuries? But when in modern times has such a mean-spirited, angry, uniformly dishonest man ever attained the highest office in the land?

Joe Biden is an awful human being. He is the very worst example of what the DC Swamp is and has been for the last half-century.

If we elect this dishonest, angry, hateful man to the presidency, our nation will experience the longest and darkest four years since World War II. Let’s all do what we can to make sure that doesn’t happen.

In this morning’s Campaign Update, I detailed the Biden Campaign’s new “Hide the Geezer” strategy, a tactic in which they plan to minimize their impaired candidate’s exposure to the press and the public.

Well, it ain’t working. The strategy, which was implemented over the weekend, went completely off the rails this morning at a Biden event at a Michigan auto factory. In the clip below, Quid Pro Joe can be seen cursing at and ridiculing Democrat voters and staffers, and haranguing them with abject falsehoods regarding the 2nd amendment and his history of [non] support for it.

The clip contains subtitles, so no transcript will follow. Watch and read along – it is absolutely surreal:

Different angle, close up of ⁦@JoeBiden⁩’s aggressive and clearly unstable behavior while yelling at the auto worker. pic.twitter.com/dzk2dshfZH

As I pointed out this morning, any campaign that attempts to hide an inadequate or impaired candidate from the public is doomed to experience a black swan moment during which his true nature becomes clear to every observer. The corrupt news media will do everything it can to ignore this morning’s event and the many like it that will inevitably follow, but at some point, clips of this kind of behavior from a man who is obviously suffering from an advancing mental impairment will become so ubiquitous across social media that the Biden campaign and the Democrat Party will suffer major consequences.

Everyone involved in the Biden campaign – including his wife – should all be utterly ashamed of themselves for continuing to roll this elderly, frail and declining man out there to embarrass himself every day. At this point, it truly is elder abuse.

[UPDATE: Right on cue, MSNBC, in its ongoing desperate efforts to support the Biden campaign, posts a story with a heavily-edited version of the video that edits out the “You’re full of shit!” comment, his threat to “slap” the guy’s face, and his repeated “shush!” and “I don’t work for you!” comments directed at his female staffer:

Expect CNN and the networks to all follow this model for their coverage, assuming they choose to “cover” the outburst at all.]