The countdown to the announcement of his new contributor agreement with MSNBC has begun. – Preacher Pete Buttigieg, the scripture mis-quoting failed ex-Mayor of a small college town in Indiana, suddenly decided to end his hopeless presidential quest Sunday afternoon, a decision that seems odd given that it came just a little more than a day before the opening of the polls for the Super Tuesday primary contests in 14 states.

The decision seemed even stranger given that it came mere hours after Buttigieg had given this interview with the execrable Chuck Todd on Meet the Press:

Buttigieg: "We do a lot of math on this campaign" to make campaign decisions pic.twitter.com/hxKgOgOOPr

Buttigieg: We believe there are places from coast to coast…where our messages are resonating particularly well. We’ll be looking at the math as we continue to push and make the most of the resources that we have. I think what matters the most right now is calling Americans to that vision of what it could be like in this country if we could turn the page on the toxic and divided character of our politics right now.

There is already an American majority that agrees with us, that agrees with our party…you wouldn’t always know it from looking at the outcomes in Washington, but right now the American people are already with us. What’s going to be needed is a message and a messenger to make sure those priorities are going to be met. I find that is true in the reddest of states, and on the coasts as well.

Every single day, we do a lot of math on this campaign, so we’ll be assessing that at every turn.

Huh. Guess he waited to “do the math” until after he’d spoken to Todd.

In all seriousness, the most likely thing here is that he and his staff met later in the day, and the math showed them all that his campaign was out of money, with zero prospect of winning a damn thing in any state, on Super Tuesday or at any other time down the road. Maybe he also got a call from George Soros or one of his many proxies, telling him that he had served his purpose in this campaign and that the money spigot was about to be turned off for good.

Either event would make it clear that it was time to see if the candidate couldn’t go make a deal with one of the cable news networks to become a paid contributor, like Andrew Yang already did at CNN. Hell, Preacher Pete is so glib, he’d be a good candidate to host a prime-time show on one of the liberal channels. I mean, c’mon, he’d be miles better than crazy Larry O’Donnell or Fredo Cuomo. Don’t be shocked if you see him pop up on one of the Super Tuesday analyst panels tomorrow night. He’s a natural.

Meanwhile, in Selma, Alabama… – Looky what happened to Mini-Mike when he made the stupid decision to go speak in a black church in Selma on Sunday:

Members of a congregation turned their backs to Mike Bloomberg as he spoke at a church in Selma, AL. pic.twitter.com/wuSP1mVjJR

I don’t know who is advising this guy, but whoever told the master of “stop and frisk” it would be just a peachy idea to go politicking in a black church in Selma, Alabama needs to be put on the next bus home.

And by the way, whatever happened to the separation of church and state in this country? Churches who allow their Sunday services to be taken over by politicians need to have their tax exempt status revoked. If you want to make your church facility an adjunct for the Mike Bloomberg, Bernie Sanders or Joe Biden campaign, then you need to start paying taxes, especially on the money you got from the candidate for letting him become your preacher for a day.

This is just one more example of how the political left in this country destroys everything it touches.

Hey, at least they weren’t in church. – Also-ran candidate Amy Klobuchar suffered her own bit of indignity on Sunday when this happened:

ST. LOUIS PARK, MN — Protesters in Senator Klobuchar’s home state have stormed the stage at her campaign rally, with dozens chanting, “Free Myon!” and “Klobuchar has got to go!” pic.twitter.com/n0MLZK3mO7

So, George Soros strikes again, sending Klobuchar a clear message through one of his proxy groups, Black Lives Matters, that it is well and truly time to end her own hopeless quest. Expect her to call it all good tomorrow night.

“I like these guys…they are funny guys…just kill one of them.” – So, that will leave Fauxcahontas standing alone against the trio of 78 year-old pasty-white men. If it were a Western movie, she’d be playing the role of El Guapo against the Three Elderly Amigos. Can’t wait to see the Amigos doing their dance number to “My Little Buttercup.” 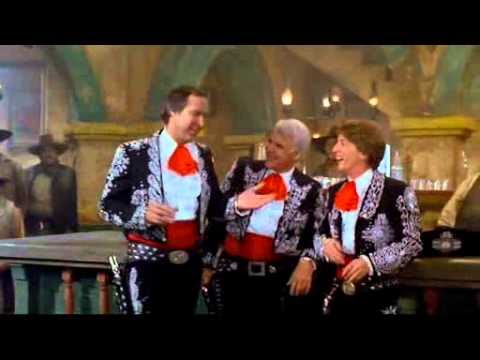