U.S. job openings unexpectedly increased in May as state economies stirred to life and businesses looked to hire anew.

The number of available positions rose to 5.4 million during the month from 5 million in April, according to the Labor Department’s Job Openings and Labor Turnover Survey, or JOLTS, released Tuesday. The median forecast in a Bloomberg survey of economists called for 4.5 million openings. Job openings that involve workers recalled from layoffs or positions that are only offered internally are not counted in the figure.

Think about this characterization by Bloomberg for a moment: This report was for the month of May, when these “experts” already knew that the U.S. economy blew away employment expectations, as the jobs report came in with 2.5 million new jobs created vs. “expert” expectations that it would in fact lose more than 8 million.

But hey, when you are a part of the corrupt news media or the “expert” class the media loves to quote, anything good that happens in Trump’s America is always, without exception, unexpected.

This must not stand. – Several days ago, a video went viral of a husband and wife in Contra Costa County, CA using black paint to cover up a yellow “Black Lives Matter” mural that had been painted on the main street of their little town of Martinez by the Marxist Democrats in charge of the local government.

Yesterday, the couple themselves were charged with three counts of vandalism, including a hate crime, by the Contra Costa County DA, whose campaign was funded by Soros front groups:

A White man and a White woman who allegedly painted over a California community's Black Lives Matter mural this weekend are each facing a hate crime charge, the Contra Costa County District Attorney's Office says https://t.co/c7AXPLrNLx

Amazingly, the DA’s notice characterizes the Marxist, domestic terror group BLM as “an important civil rights cause that deserves all of our attention.” I swear I do not make this stuff up: 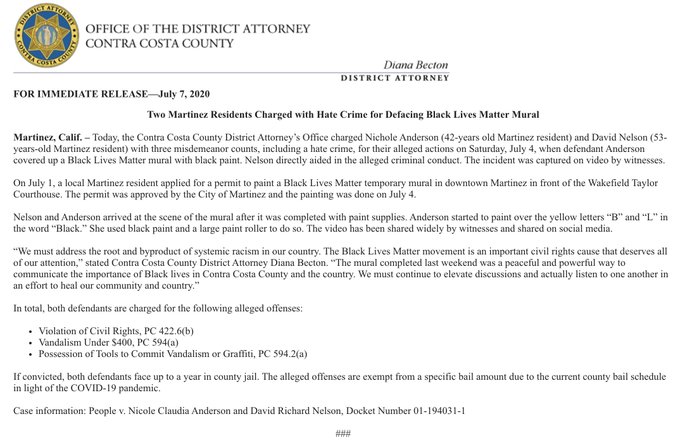 Never mind the fact that it takes about 15 seconds of rudimentary research to determine conclusively that BLM is in fact a Marxist organization whose actual goals have nothing to do with Civil Rights and everything to do with the destruction of the American Republic – Democrats in power are now determined to make any opposition to those goals a “hate crime.”

This cannot stand in the United States. Elections matter, and the idiots in Martinez elected the Democrats who authorized the mural. Thus, a charge of vandalism is entirely appropriate. But the effort to prosecute the act as a hate crime is beyond the pale and demands intervention by the U.S. Department of Justice.

Are you watching, Mr. Barr?

School reopenings this fall are going to vary by state, and that’s not a good thing. – At an event at the White House Tuesday, President Trump and First Lady Melania Trump led a discussion about safely reopening America’s schools this fall. At the event, the President promised to put pressure on governors to get their schools reopened for the good of the children, who have already been set back in their learning due to the irrational panic over the Wuhan Virus.

One governor he won’t have to pressure is Ron DeSantis, the stalwart Governor of Florida, whose education commissioner issued an order yesterday requiring all public schools to reopen this fall for five days a week.

Naturally, the corrupt news media immediately found teacher’s union officials who are horrified that their members might have to actually go back to work. From a piece at USA Today:

But as concern about the order spread online Monday, some school leaders across the state said: Not so fast.

Opening schools under current conditions “could be catastrophic,” said Karen Resciniti, president of the Martin County Education Association. Most educators in her district are hesitant to return to the classroom, even if social distancing is followed and masks are required, she said.

Here’s how you solve that problem: Just order that teachers take a 40% pay cut for any distance learning classes they teach, and their concerns over the minute chance they might contract COVID-19 from children would evaporate in a second.

Reopenings are not so simple in other states. In Texas, where Governor Greg Abbott has gone scared of a bad media day, the Texas Education Agency issued a set of byzantine guidelines for reopening that will leave every school district, and schools within school districts, doing something different:

But not as shameful as what is happening in the Democrat-led state of Washington. There, education officials issued a reopening process that plans to discriminate against some children – especially white and Asian kids – based on RACE. I swear I am not making this up:

Folks, we are witnessing in America today an effort by the Democrat Party to re-implement the same kinds of race-based Jim Crow laws that their party put into place and enforced across the South for 100 years.

This cannot stand if America is to stand. Ultimately, these people hate you and want you dead, and it is showing up every day in the actions they take and the documents they produce. You don’t have to believe me: All you have to do is observe what they say and do.

If they win the elections this November, this stuff is what America will become. In his monologue Monday evening, Tucker Carlson asked how can a political party that overtly hates half of Americans ever hope to govern the country?

The answer is simple and staring all of us in the face: By sheer, brute force. That’s how Mao did it; it’s how Stalin and Castro and Pol Pot did it; and it’s how this current group of radical Marxist Democrats would do it.

Get registered to vote. Oh, and buy more ammo just in case.