Joe Biden can’t do the maths. – He’s just an Unfrozen Caveman Presumptive Nominee – our strange ways and numbers confuse him. Here’s Creepy Uncle Quid Pro Farty China Joe Biden, telling us that he believes that the Wuhan Virus has killed fully 1/3rd of all Americans:

If I ever said something so mortifyingly stupid, the Fake News Media would come down on me with a vengeance. This is beyond a normal mistake. Why isn’t the media reporting it? pic.twitter.com/KkuWLkMfp7

Speaking of stuff you just could never make up, officials have decided that it is no longer appropriate to display a statue of George Washington at….wait for it...GEORGE WASHINGTON UNIVERSITY. I swear, I swear I do not make this stuff up:

Seriously, what the hell is going on? pic.twitter.com/pENeXV5B5f

Man, no one could have ever guessed. – If you still believe – after all of the rampant chaos and idiocy and anti-American lunacy you have seen from them over the past month – that Black Lives Matter is anything other than a dangerous domestic terrorist group, check out this story from the Washington Examiner:

The co-founder of Black Lives Matter names a convicted cop killer as one of her heroes, and the BLM national organization is fiscally sponsored through a leftist group whose board of directors includes a convicted terrorist.

Alicia Garza, one of three co-founders of the Black Lives Matter national organization, has repeatedly talked about how convicted cop killer and wanted domestic terrorist Joanne Chesimard, also known as Assata Shakur, is one of her main inspirations. Susan Rosenberg, a member of the board of directors for the left-wing Thousand Currents group, which handles the intake of donations made to Black Lives Matter, is a convicted terrorist who, among other things, was suspected of helping Shakur escape from prison.

Rosenberg, who was listed as the vice chairwoman of the board of directors for Thousand Currents until the webpage was pulled down this week, as first reported by the Capital Research Center, had been a member of the radical leftist revolutionary militant group known as the May 19th Communist Organization, affiliated with the Weather Underground terrorist group and other radicals. She was convicted on weapons and explosives charges and sentenced to 58 years in prison, serving 16 years before being pardoned by President Bill Clinton in January 2001.

Thousand Currents did not return a request for comment.

Thousand Currents, of course, is just another of the hundreds of George Soros front groups that fund social unrest and violence in America today. If you were able to audit the group’s books, you would no doubt see it funding Antifa and other Democrat Party causes designed to destroy our country as well.

Black Lives Matter is just Antifa with another, more politically correct name. That’s all it is. If you still don’t get that, go stand in a corner until you do.

At least I think that’s a woman – it’s really kind of hard to tell. If you are gay or Jewish and you vote for Democrats, you are voting for people who fund and support people who want you dead. That’s just a fact of life.

Hey, remember when BLM was going to tear down the Emancipation Memorial? – Yeah, that didn’t happen, thanks to President Trump. Trump ordered the federal Park Police to protect the memorial – which was funded by freed slaves – after BLM terrorists had announced they planned to congregate at Lincoln Park at 7:00 Thursday night to tear the thing down.

In keeping with the Trump agenda to protect the country against violent invaders like Mexican drug gangs, the Park Police responded by building a wall: 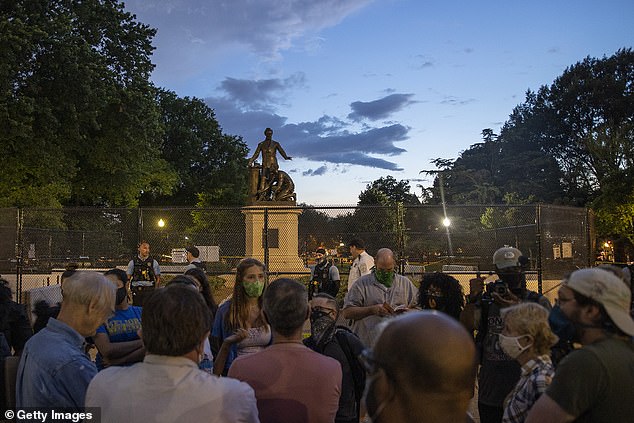 From a story at the Daily Mail:

The Emancipation statue was first erected on April 11, 1876, exactly eleven years to the day of Lincoln’s assassination.

It was paid for by formerly enslaved people, many of them Black veterans, to honor Lincoln for the Emancipation Proclamation.

The fundraising was started after Virginian Charlotte Scott donated the first $5 she earned as a free person to create a memorial to Lincoln, according to DCist.

That is what these terrorists want to tear down. That is the noble history they wish to erase. Despicable.