Is the Democrat governor dam cracking? – Minnesota Governor Tim Walz, a true doofus who has kept his entire state on lockdown despite seeing fewer than 100 Wuhan Virus deaths that did not occur among nursing home residents, seems to be beginning to see the light.

Two days after President Donald Trump threatened to begin withholding federal funds from states that continue to discriminate against places of worship, Walz announced on Sunday that churches in his state would be able to reopen at 25% capacity beginning Tuesday. The Governor had been under heavy pressure from Catholic and Lutheran leaders, who informed him in a letter they planned to reopen Tuesday regardless of any orders he chose to leave in place.

Here’s an excerpt as reported in the Daily Caller:

Walz had previously announced that restaurants, bars, and certain small businesses would be allowed to open at 50% capacity on June 1, but this order did not afford the same relaxation of restrictions to churches and instead limited church serves to 10 people.

Minnesota Catholic and Lutheran churches responded to Walz’s order in a Wednesday letter in which Archbishop of Saint Paul and Minneapolis, Reverend Bernard A. Hebda, told Walz that public masses in Minnesota would resume May 26.

“It concerns us, however, that we still are without a clear roadmap, metrics, or definite timeline from your administration about a phased re-opening,” the letter told Walz. “Executive Order 20-56, moreover, seems to have taken a step backward, imposing an explicit prohibition on faith-based gatherings where none had existed.”

“Your willingness, at the same time, to allow a ‘click forward’ for other sectors and activities on your dial –many of which cannot be classified as essential as the life of faith, prompts us to consider it necessary to move forward. We certainly remain ready to work with your administration as events unfold and circumstances change.”

Thus, Walz relented under pressure. This could be the start of a trend.

Nevada’s doofus Governor, Steve Sisolak, also finds himself under increasing pressure. One reason why is the data, which increasingly reveals that the man’s ongoing shutdown orders have no basis in science or reason. Check this out: 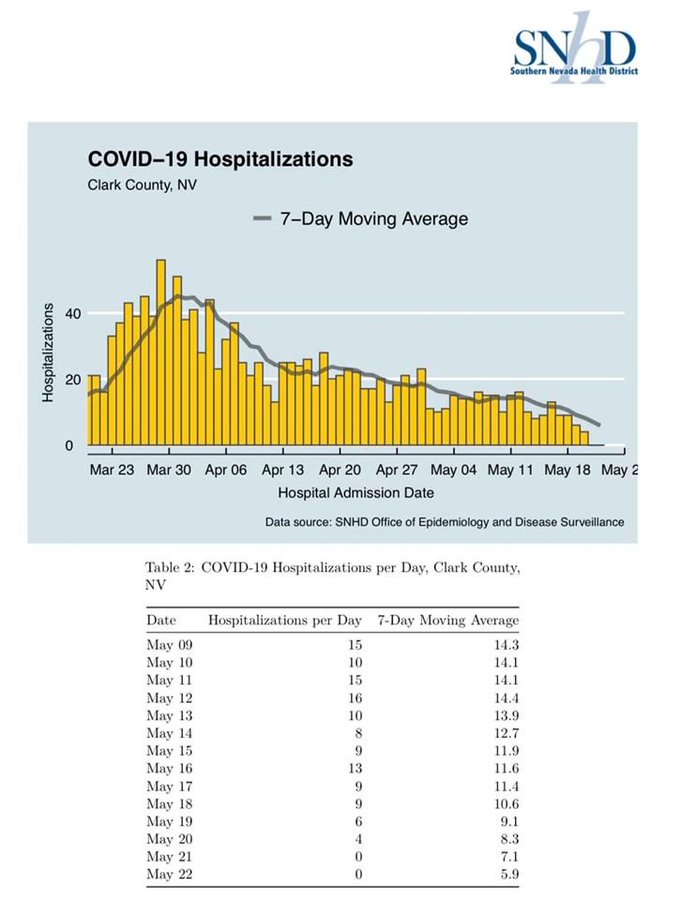 Sisolak and his medical advisors repeatedly warned that the state would probably see a significant increase in hospitalizations and new cases once restaurants were allowed to start reopening at low capacity on May 9. Instead, the number of new hospitalizations per day in Clark County have dropped steadily to zero.

With his senseless, draconian shutdown orders threatening to destroy his state’s gaming industry, most now expect Sisolak to announce on Tuesday that he will allow casinos to reopen at 25% capacity beginning on June 4. We’ll see.

One thing is for sure: As the data increasingly demonstrates that every prediction they’ve made about this virus is false, the cracks in the Democrat dam of obstruction are growing. The crowded beaches, lakes and shopping centers we have seen all over the country on this long weekend show that most Americans are already over this unprecedented and nonsensical approach to virus control and ready to resume living their lives.

Holdout Democrat brutes like Gretchen Whitmer, Kate Brown, Tom Wolf, Gavin Newsom and Andrew Cuomo will ultimately be faced with a choice of relenting or seeing their citizens force the issue en mass. Because this is still America, even in the blue states, whether they like it or not.

It all comes down to Ratcliffe, Barr and Durham. – President Trump gave a wide-ranging interview to Sinclair New’s Sharyl Atkisson, host of ”The Full Measure.” Among many other topics, Mr. Trump probably put the final nail into the coffin of the flagging campaign of Jeff Sessions, which is a service to the country.

The interview is very long, and the full transcript can be found at this link. The President made some particularly interesting remarks about Obamagate and his four-year battle with the Deep State. Here are some excerpts from that:

Now what’s happened, but I didn’t know people in Washington and whether it’s Sessions, which was a mistake or Dan Coats was a big mistake, but Sessions was a big one. Coats, he sat there. He didn’t do anything. When you look at what Richard Grenell has done in eight weeks, these people didn’t do anything for two and a half years. They should have been exposing this. So I’m very disappointed in certain people.

They never thought I was going to win, and then I won. And then they tried to get me out. That was the insurance policy. She’s going to win, but just in case she doesn’t win we have an insurance policy. And now I beat them on the insurance policy, and now they’re being exposed. Comey is a dirty cop, McCabe, bad guy. These are all bad guys. Lisa Page and Strzok. These are the two lovers, right? And they use public servers. They put it out public, because they didn’t want anybody to see, like spouses, et cetera, to see that they were having an affair. And because they did that, they got caught. Tremendous things have happened. They forged documents. We caught them. They had people that had forged documents.

Interesting stuff, and rumors were flying in DC over the weekend that this could be a very interesting week. Let’s hope so.

You can tell the quality of a person by their enemies. – If that old adage is true, then Kayleigh McEnany is obviously a stellar person doing a hell of a job in her role as White House Press Secretary.

On Fox News Sunday, McEnany became the target of corrupt old media hack Chris Wallace and never-was Jonah Goldberg, who in 20 years has yet to write a single memorable word. Wallace clutched his pearls and tut-tutted about McEnany’s regular lecturing of the press corps, saying that “I spent six years in the White House briefing room covering Ronald Reagan. I have to say, I never — and in the years since too — I never saw a White House press secretary act like that. I have to say that if Kayleigh McEnany had told Sam Donaldson and me what questions we should ask, that would not have gone well.”

Of course, what Wallace fails to mention is that, as biased as he was, a Sam Donaldson in his prime would have been all over Obamagate, because he used to be an actual working journalist. Wallace never really was much of a journalist, and probably would have just parroted the Democrat Party narrative, something he’s made an entire career out of doing.

But the capper came when Goldberg, the “Never Trump” surrender monkey who has used the Wuhan Virus outbreak as an excuse to lose his razor blade and gain 30 pounds, called McEnany’s practice of actually fighting back against press hostility as “indefensible and grotesque.” This is completely in keeping with the “Never Trump” credo that good fake conservatives must never fight back, but keep surrendering ground so that they can get invited to all the right DC/New York dinner parties and occasionally appear on the Fox News Sunday panels with Chris Wallace.

People like Goldberg have built good livings out of constantly losing and surrendering. Thus, they despise Trump and anyone who supports him, because those people are upsetting the apple cart on which they have built their entire careers.

These are the worst people in our society, folks, leeches who produce nothing of value. Remember their faces and never forget what they have tried to do to our country.

This is especially important on this Memorial Day, as we remember our fallen heroes who lost their lives fighting to preserve our freedoms. Not a single surrender monkey or societal leech among them.