Now that convicted pedophile Jeffrey Epstein has committed the most conveniently-timed “suicide” in American history, no one in their right minds should expect our Department of Justice to provide any form of real justice for the many women who suffered at the hands of Epstein and – allegedly – his many very powerful friends and associates.

After all, this “suicide” happened under the not-so-watchful eye of that selfsame DOJ, given that the Bureau of Prisons resides within that organization. And Epstein was not just any random prisoner within that prison system – he was perhaps the most high-profile accused suspect currently residing within its confines. With allegations swirling that a former president – and a sitting one, come to think of it – a former secretary of energy and New Mexico governor, a former president’s wife, a former senate majority leader, and a prince of England were all participants in his pedophilia escapades, no prisoner had attracted more public and media attention than the owner of “Love Island” and the “Lolita Express.”

Making the circumstances surrounding this “suicide” even more suspicious – and the blackeye for the DOJ even blacker – is the fact that Epstein supposedly had tried to commit suicide just last month and had supposedly been placed on a “suicide watch” and locked into solitary confinement since that time. As a result, he supposedly had guards stationed just outside his prison cell around the clock, seven days a week, as well as closed-circuit TV cameras monitoring him.

Yet, despite that extremely high and very public profile and despite all of these safety measures having supposedly been taken to ensure this prisoner remained alive to face trial, the New York Times and the rest of our mainstream news media would have us all take at face value this explanation of events:

“Mr. Epstein hanged himself, the officials said. He was found at roughly 6:30 a.m. Saturday at the Metropolitan Correctional Center in Manhattan and was taken to a hospital, where he was pronounced dead, the federal Bureau of Prisons said in a statement.”

Oh, but don’t worry, the Times tell us, because help is on the way:

“The Federal Bureau of Investigation will examine Mr. Epstein’s death, the Bureau of Prisons said.”

Yes, friends, the folks at the raging dumpster fire that is Christopher Wray’s F.B.I. will now “investigate” the circumstances of the “suicide” of the Bureau of Prisons’ most high-profile prisoner. We can rest assured that that inquiry will be carried out with every bit of the diligence and due process we saw during the F.B.I.’s conduct of the investigation into Hillary Clinton’s illegal email server. Hey, maybe we can go ahead and give Peter Strzok his old job back so he can lead this “investigation,” too!

Here’s what is really likely to happen:

Soon, probably before August is out, some U.S. Attorney at the Southern District of New York – hey, maybe James Comey’s daughter? – will stand before the cameras and announce that it is just soooo darn impossible to continue in this investigation now that the alleged perp happens to be dead. Never you mind that the existence and willing testimony of all these victims is still available; never mind that Epstein’s alleged facilitator, Ghislaine Maxwell remains among the living, at least for now; why, the DOJ’s vaunted and massively-staffed SDNY just doesn’t have the capacity for pursuing such a complex and difficult case any longer.

Next, a few weeks later, someone at the F.B.I. will quietly issue a written statement that says, “yep, he committed suicide all right, and no one at the prison or anyone else in authority did anything wrong at all. That’s right. You betcha.”

Then, if these developments result in any ongoing uproar from the public or the media, Attorney General Barr will order his plodding Inspector General, Michael Horowitz, to perform an internal investigation into the Bureau of Prisons’ handling of Epstein. Given that Horowitz appears to take more than 18 months to go to the restroom, this will ensure that we will hear nothing more about the matter until safely after the 2020 elections have come and gone.

No doubt most of you are hoping that this DOJ will somehow still deliver justice to these poor women. Well, as my dear ol’ Dad used to tell me, “you can hope in one hand and spit in the other and see which one fills up faster.”

The smart money is on the spit. 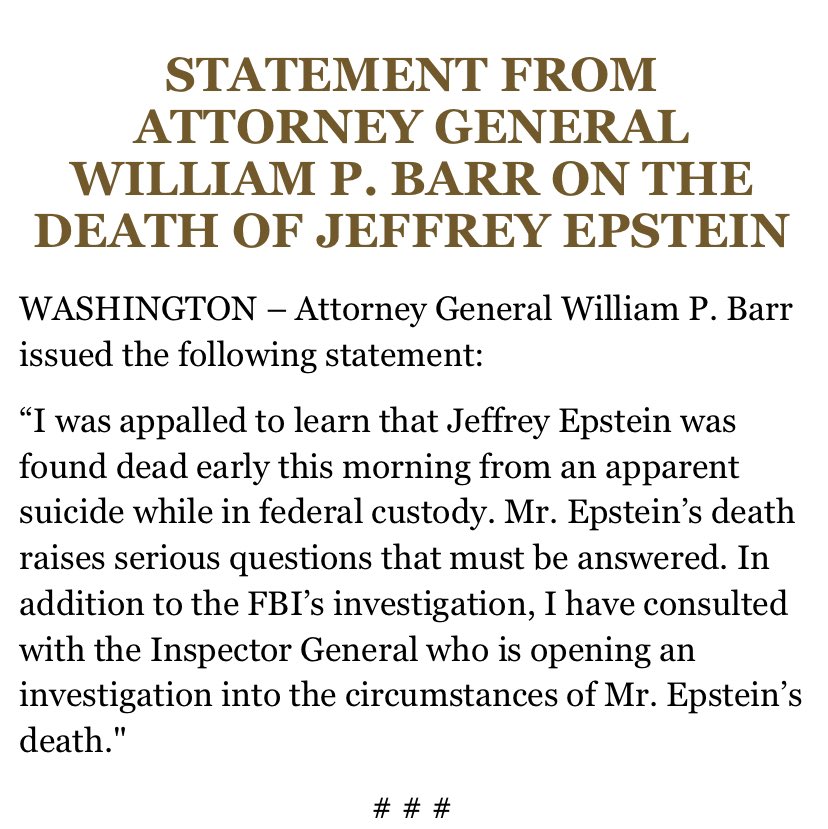 The smart money remains on the spit.