Another day, another fake poll. – The Democrats and their media enablers have apparently decided it’s time to try to revive the moribund campaign of their former “next Kennedy”, Irish Bob O’Rourke. With the fake Hispanic’s support among Democrats mired in the mid-single digits for the last six weeks, party leaders and fake media mavens hoping their party’s primary season will produce an interesting race that doesn’t quickly boil down to a depressing slog between two near-octogenarians know that means they need their precious “Beto” up on stage waving his arms around and promising to use his office to ban everything from reliable electricity to guns to Tylenol.

So, what’s the easiest way to rev up Democrat base-voter interest in a candidate? Why, get the news-fakers over at CNN to dummy up a fake poll showing that Irish Bob is the one guy among the 20 or so circus clowns lined up to seek the nomination who can not just defeat, but wallop President Donald Trump in the 2020 general election. You betcha.

Presto! CNN has a new poll of “registered voters” this morning pretending to show that Precious Beto would beat the President in a head-to-head race by a 52-42 margin! It’s like magic, I tell ya! 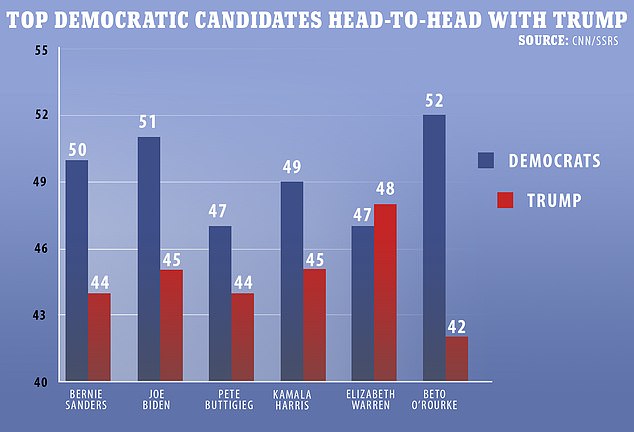 In addition to its obvious, blatant effort to pump up support for the Party’s fake Hispanic – hey, why do the party and its captive media continue to ignore the real Texas Hispanic in the race, Julian Castro? –  this poll is designed to serve a couple of other purposes:

So, just like the New York Times has done the past couple of days with their carefully-planted fake stories designed to support the Deep State narrative, when the Democrat Party poobahs need a favor, no fake news outlet is more willing to whip it out than America’s least-favorite news-flasher, despicable old CNN.

The irony here is that the Democrat Party’s “Russia Collusion” strategy obviously is failing, and the best way to tell that is by looking at CNN’s own ratings, which have crashed through the floor since the release of the Mueller Report and its revelation that there never was any “collusion” to begin with. At least, not by anyone involved in the Trump Campaign.

The fake news network’s ratings declined by an amazing 26% in April compared to March, as the fantasy it had used to attract viewers for two solid years came up a crapper. That’s an even more amazing 41% below the network’s average rating from April, 2018. If our nation’s airports stopped their mysterious practice of giving CNN a monopoly on their captive travelers, the cable network would have almost no viewers at all.

The big problem here for the Democrats is that they really don’t have anything else other than hate and division and lies to offer the American people. Those three things form the entire basis of their Party’s reason for existing today. There is no more there there. So they have no choice but to keep doubling and tripling and quadrupling down on the only things they know to do anymore.

That means that CNN, the New York Times and all the other fake media outlets in our national fake media universe are left with no choice but to double and triple and quadruple down right along with their masters.

What a sad and destructive existence these people lead.