Totalitarians never voluntarily give up their power. – The Little Menace to Society, Anthony Fauci, still wants you to mask up your kids when they go outside to play, because of course he does.

We know – from science and data & all that jazz – that COVID-19 poses little to no risk to children, they rarely pass it to others, and by now most if not all elderly & at-risk have been vaccinated, yet Dr. Fauci STILL insists they continue to be forcibly muzzled in public. 🤡 pic.twitter.com/8eiQx9Mkt7

Little fascists like Fauci never voluntarily surrender power once they acquire it. It must be taken from them, and who in the Biden/Harris Harris/Biden administration is going to do that?

The News-Faker of the Week Award goes to… – Well, it goes to CNN, because of course it does. We’ve all heard by now of the tragic story out of Washington, DC last week of the Uber Eats driver who was murdered by two teenage girls who tased him and attempted to rob him in a carjacking incident. After being tased, the driver, a 66 year-old resident of Springfield, VA named Mohammad Anwar, lost control of the car and ran off the road. He died at the scene, and the girls were arrested by DC cops and charged with felony murder and armed carjacking.

So, how did the scum at CNN characterize this incident? I kid you not, they said it was all just an accident:

Police said the girls, 13 and 15, assaulted an Uber Eats driver with a Taser while carjacking him, which led to an accident in which he was fatally injured. https://t.co/N6RpLoTu8x

That’s right: An ‘accident’ killed Mr. Anwar, not the two teenagers who tased him as he was driving a moving car. The motivation for CNN’s news-fakery here is quite obvious: The two girls are both African American. If they were white, they’d be portrayed as the rancid little monsters they really are, but because they are part of one of the Democrat Party’s favored minority groups, the Democrat activists at CNN must find some way to shift the blame.

Thus, it’s all just an ‘accident.’

You just cannot make this stuff up, folks.

The Tone-Deaf Public Official Award goes to… – But unbelievably, this story gets even worse, thanks to DC Mayor Muriel Bowser, whose reaction to this murder by two of her city’s teenagers was even more reprehensible than CNN’s. And who would have ever thought that was even possible?

Anyway, here is the tweet Bowser sent out as her official response to the killing:

Hi @MayorBowser! Why did you delete this? pic.twitter.com/YMYvmrQZZz

See? The murder isn’t the fault of the teenage girls – it’s the fault of Mr. Anwar for not properly protecting himself and his car.

Bowser later deleted the tweet, but that doesn’t really help anything. Again, if the two girls were white, does anyone really think her initial reaction would have been to blame the driver? Of course not. But as is entirely typical of Democrat politicians all over the country, her immediate reaction was to protect the Democrat Party’s preferred narrative, not the public.

Today’s Short-Term Memory Reminder. – Just a reminder that all the numbers of cases, hospitalizations and deaths you see tossed around about COVID-19 are abject lies: 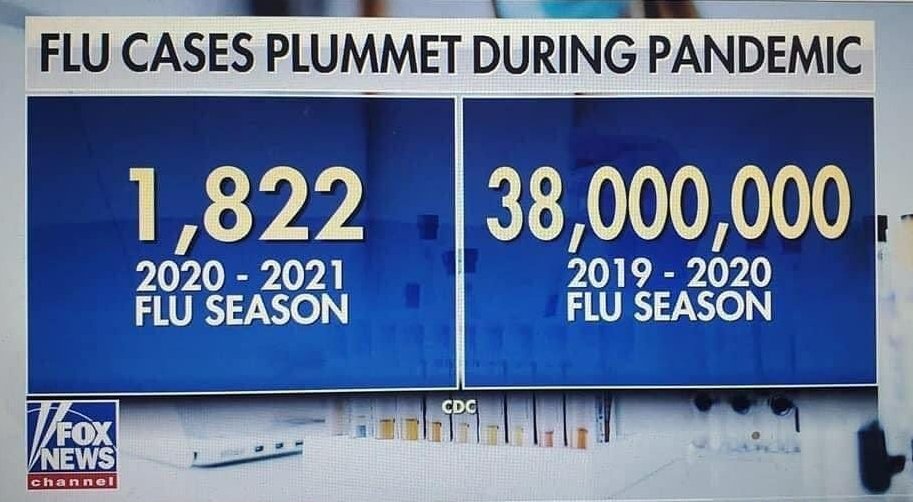 Do any of you really believe that in all of the United States of America, we have only had 1,822 cases of seasonal flu since last September, compared to 38 MILLION during the previous flu season?

Please. They think we are all idiots, and sadly, too many of us are.

Speaking of lies about COVID-19… – Remember how the corrupt news media, led by the Little Menace to Society Anthony Fauci, told us all that the annual bike rally in Sturgis, South Dakota last August was going to become a massive “super-spreader” event?

The media’s false narrative about the Sturgis Motorcycle Rally being a COVID-19 superspreader event | Just The News https://t.co/6FzDvvWpdO

From the story at JustTheNews:

Sturgis city manager, Daniel Ainslie, said the study and other models that predicted their hospitals would be overwhelmed were wrong.

“I think at the peak during the rally, and even after the rally, about five percent of the [hospital] beds were used for COVID,” Ainslie told Sharyl Attkisson on her show, Full Measure After Hours.

The media linked anywhere from one to about five fatalities to Sturgis, but Ainslie said none were scientifically traced.

“The hard data showed that there were about 260 cases that came from here,” Ainslie said. “Now, the reality was there were probably some additional cases beyond those 260 that were immediately traced here, but to try to state that there were a quarter million, that’s just ridiculous, and it was fanciful, and it was just pushing their narrative.”

“Results from this study should be interpreted cautiously,” analysts write, adding that “the associated data analyses used to obtain nationwide estimates were relatively weak.”

Last year, 460,000 bikers attended the Sturgis Motorcycle Rally, but that was fewer than usual. Although, Ainslie said, the media used footage from previous years to make it look busier than it actually was.

Ainslie said that “was really disappointing, because we have several live feed cameras, and we gave every media outlet permission so that they could use that, so that they could show current images. Because the vast majority of the time on our streets, there would be 40 or 50 people on a block.”

The media presented a different picture, she said.

Well, of course the media presented a different picture. Because the media no longer considers its’ job to report actual news: The media is now there solely to promote the preferred Democrat Party narrative, and the narrative around the Sturgis rally was that it it was baaaaaaaad, and if CNN and MSNBC had to resort to using old video from previous rallies in order to characterize it that way, then hey, no problemo!

Dignity?!? This is “dignity”??? – During his visit to the Texas/Mexico border on Friday, Texas Senator Ted Cruz was able to take and release video of the horrific conditions under which the Biden people are holding fake asylum seekers from Central America right now, but only after an administration staffer did her best to obstruct him from capturing the video. I kid you not: At one point, this evil minion actually told Sen. Cruz that he should preserve the invaders’ “dignity” by not taking video of the squalor in which they are being held.

How far is Joe Biden going to stop the American people from seeing inside the Donna CBP facility?

Biden sent a political operative from DC to block our cameras and even threatened another senator to obstruct legitimate congressional oversight. pic.twitter.com/vHT2U7Nh1z

From the story at Red State:

The staffer says, “Please give dignity to the people, please give dignity to the people. Please respect the people, the rules.” This, she says without any sense of irony or apparent shame about the Biden “rules” and policies causing this problem and not giving anyone “dignity,” keeping people packed together into cages like sardines in bad conditions during a pandemic. She doesn’t want Americans to see that the “humane” way that Biden has claimed that he’s responding to this all is just a flat-out lie.

Yes, friends: This is what the China Joe/Kamala Toe administration considers to be “dignity.”

These people are monsters. All of them. Every last one.

I,m offended. You used my description of K-toe without my consent. Such a swine she is so all is forgiven. wink, wink.

Soros life dream is to destroy the USA. He has almost accomplished his life’s goal. He spend a few billion and 20 years to destroy this country and it worked. Money and corruption at all levels, propaganda media, stolen election system was all it took.

Muriel Bowser recently said she won’t prosecute “low level crimes” – I’m sure in her book, a car jacking and murder constitutes a low-level crime. The two murderers are probably out by now (no cash bail) and all charges dropped.

Hope the Pakistanis go “jihad” on the community that caused this.

That would be interesting – 2 minority groups go at each other…who does the left side with when that happens? The initial reaction would be to ignore completely.

Ignore is the medias job. bow wow will just go under ground till it passes. give it 48 hrs and she will be back.