This’ll get your day off to a great start! – We have a new mentally ill person serving as America’s assistant secretary of health, and two senate Republicans – Susan Collins and Lisa Murkowski – joined the Democrats in confirming him/her. Because of course they did.

It's official, your new assistant secretary of health pic.twitter.com/1YVIilTgPP

In other news, China Joe Biden has decided the best way to deal with the border crisis he created is to double down on more crisis. – That can be the only explanation for why he decided yesterday to put Kamala Harris, who giggles every time she even thinks of the mass chaos taking place in Texas towns like Roma, McAllen and Rio Grande City, in “charge” of administration strategy.

President Joe Biden is receiving intense criticism after tapping Vice President Kamala Harris to manage the border crisis, especially after her controversial past remarks about immigration and the message her appointment sends to those crossing the border illegally.

“She’s leading the effort because I think it’s important to put someone who, when he or she speaks, they don’t have to wonder about where the president is,” Biden said. “When she speaks, she speaks for me. She doesn’t have to check with me.”

In November 2018, Harris compared U.S. Immigration and Customs Enforcement (ICE) officers and members of the Ku Klux Klan (KKK), suggesting that they were terrorists.

During a June 2019 Democrat presidential debate, Harris raised her hand in support of decriminalizing illegal border crossings into the U.S.

Later, when confronted during an interview on ABC’s “The View,” Harris doubled down on her position of decriminalizing illegal border crossings, saying, “I am in favor of saying that we’re not going to treat people who are undocumented that cross the border as criminals, that’s correct.”

Suffice it to say that the author, Ryan Saavedra, is correct when he says that Harris is without any question at all the very worst choice to fill this role.

Which of course is exactly why China Joe’s corrupt handlers picked her for the job. This isn’t complicated. The border chaos is a feature, not a glitch.

Ready for that Sock Puppet-in-Chief “press conference” today? – If you’re expecting the same kind of uniformly hostile questioning that the White House fake Press Corps invariably greeted Donald Trump with, well, sorry, that ain’t gonna happen. The corrupt Democrat toadies will toss softball after softball at China Joe, all of which will have been vetted in advance so that the Sock Puppet can simply recite canned answers that his evil handlers have written for him.

If he gets hung up with one of his regular brain freezes, no worries, he’ll just pause a moment to listen to the little voice coming in over his ever-present earpiece. 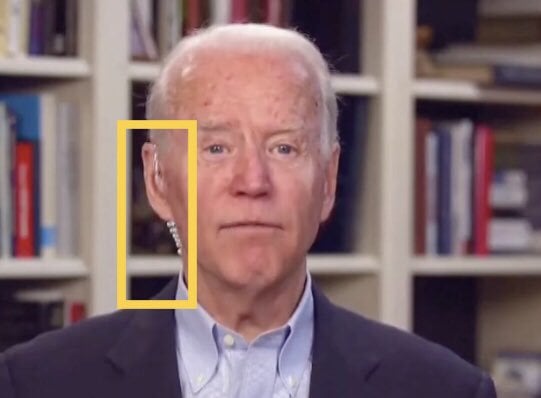 Make no doubt about this: The press is entirely complicit in this entire charade, just as it was entirely complicit in the never-ending coup d’etat the Democrats ran at President Trump for four solid years. Fake reporters like Maggie Haberman of the New York Times have been all over MSNBC and CNN last night and this morning laying the groundwork for the farce to come and doing everything they can to lower viewer expectations:

See that? Biden’s “thin skinned” and these pressers are not a “great format” for him. Here’s more from that story:

She began by wondering if the president might announce some executive action on guns to “try to steer” the topics of the presser, and how many questions he’ll take, before declaring that “these are generally not great formats for him.”

It’s a point she would circle back to later, but first, co-host Alisyn Camerota asked Haberman “What will you be watching most closely?”

“Well look, I will be looking weather for whether he loses his —” Haberman began, pausing to say “these are stylistic points to be clear,” and listing some of the substantive issues she expects Biden to talk about, before continuing her style critique.

“Particularly what I will be looking for is how does he handle the press?” Haberman said. “He has, at times, certainly during the campaign, gotten irritated with questions he didn’t like.”

“How does he do, what is his demeanor, what is his style?” she asked. “Some of this will set the tone for how he does with the press corps going forward for a while. Listen, it is in our interest, in the Press is interest, frankly in the public interest, for elected officials, particularly a president to hold a press conference. I understand why the White House didn’t think it was in theirs to do one until now, but I think this is going to tell a lot.”

Hey, any of y’all remember corrupt hacks like Haberman wondering about Donald Trump’s “demeanor” and “style” while appearing on CNN? Yeah, neither do I, because that never happened. And check out that final sentence: Good ol’ lapdog Maggie understands why the White House hasn’t held a presser for 65 days. She was screaming like a damn shrew four years ago because Trump waited 25 days to hold his first one.

Look, this presser is going to be a joke because our news media is a corrupt joke, and Maggie Haberman is the literal personification of it.

Today’s Required Reading, from Buck Sexton. – Buck Sexton is a terrific columnist who everyone should read. He’s always insightful and writes with a flair that few others possess. This morning he has an excellent piece at AmericanConsequences.com about the ongoing COVID tyranny being imposed by Democrats, led by the Little Menace to Society, Anthony Fauci. It’s a great read that everyone should take time to absorb.

Here’s an excerpt to whet your appetite:

If any expert had told you a year ago that people who were fully vaccinated would still have to mask up and avoid human contact whenever possible, that would’ve been considered absolutely nuts.

But here we are… and the bureaucratic COVID tyranny rages on.

Dr. Fauci, the diminutive public health Stalinist, has shifted the goalposts yet again. The official guidance – from the same lab-coat tyrants at the NIAID and CDC who’ve helped bring you “stand here” footprints in elevators and “mask up between bites” guidance for restaurants – is that you must act like an unvaccinated person even after you’ve been vaccinated or recovered naturally from the disease.

This is neither rational nor acceptable… They say it’s for safety, but mostly it’s for control.

As always, Fauci and his fan club of lockdown enthusiasts claim this is about “the science.” But that’s just propaganda… We aren’t talking about the temperature at which water boils or the products of photosynthesis.

Fauci, the CDC, and their ilk are making enormously consequential policy decisions under the guise of objective scientific truth. What they are effectively arguing for is the right to determine – without any meaningful public debate – when it’s “safe” for people to start living their lives normally again.

Go read the rest of it. You’ll be glad you did.

Our enemies are either licking their chops or peeing their pants laughing….we are in deep do-do. This was embarrassing.

Imagine if one of Trump’s minions called him “too thin skinned” to be able to handle a press conference.

Thin-skinned – great quality for a world leader to have in order to stand up to the tyrants, bullies and communists in all parts of the world.

The very first question for Xiden in today’s press conference should be: “Mr President, are you wearing a wire?”

So the NY Times describes Biden as “thin skinned” – and they believe this is a good quality for an American president to have?

I don’t plan to listen to a word this zombie has to say – ever – piped in via his ear piece.