I’m old enough to remember when the halftime show at the Super Bowl did not feature 300 grown-ass men prancing around with diapers on their faces.

They could have featured this band instead:

He thought it was a movie theater and “Herbie Rides Again” was playing. – Democrat activist Chris D. Jackson sent out this tweet yesterday, praising China Joe Biden for going to church instead of tweeting: 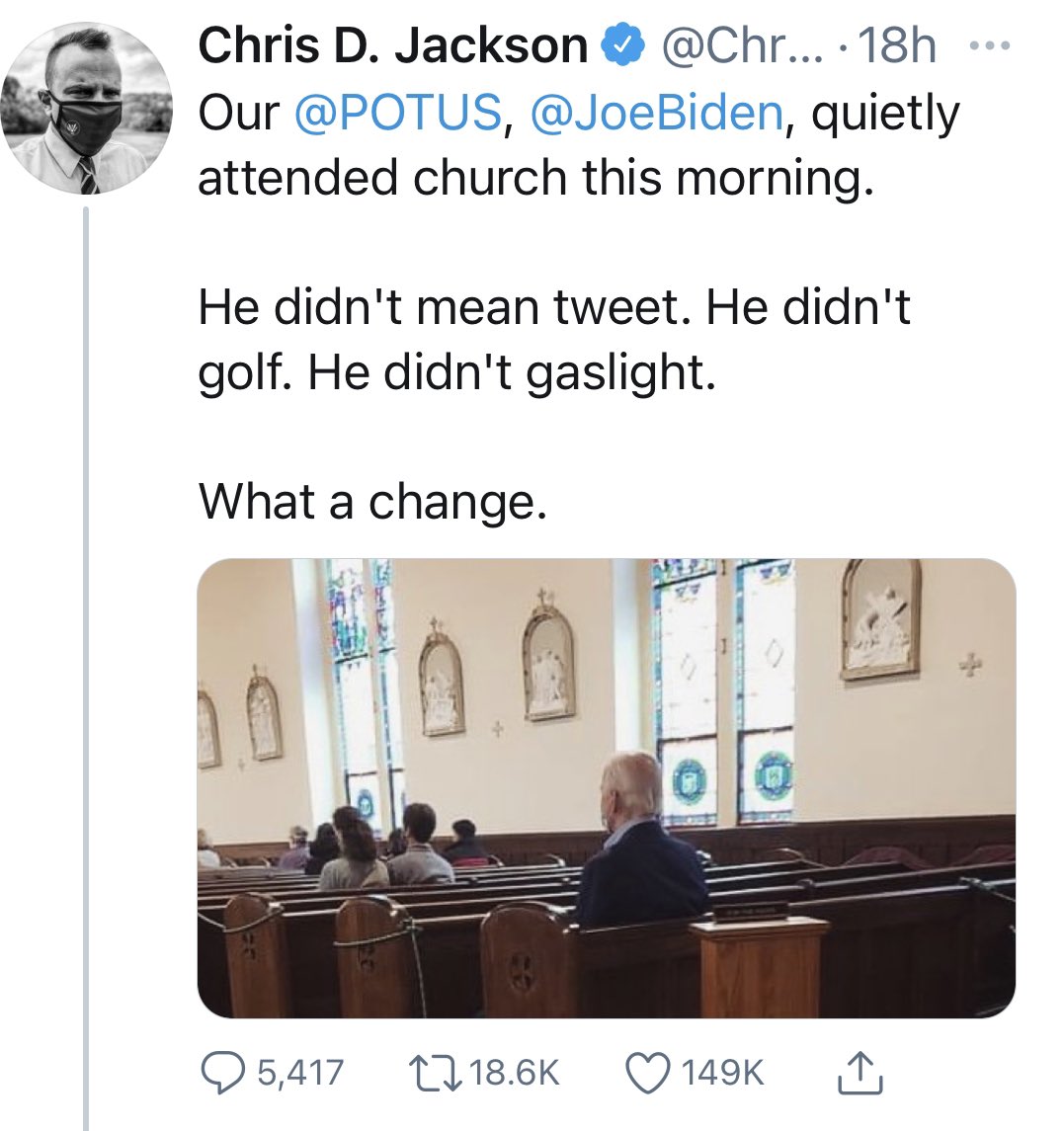 Oh, how sweet, how “presidential,” right?

Well, the problem here is that Democrat activist Chris D. Jackson issued this tweet on November 15 of last year: 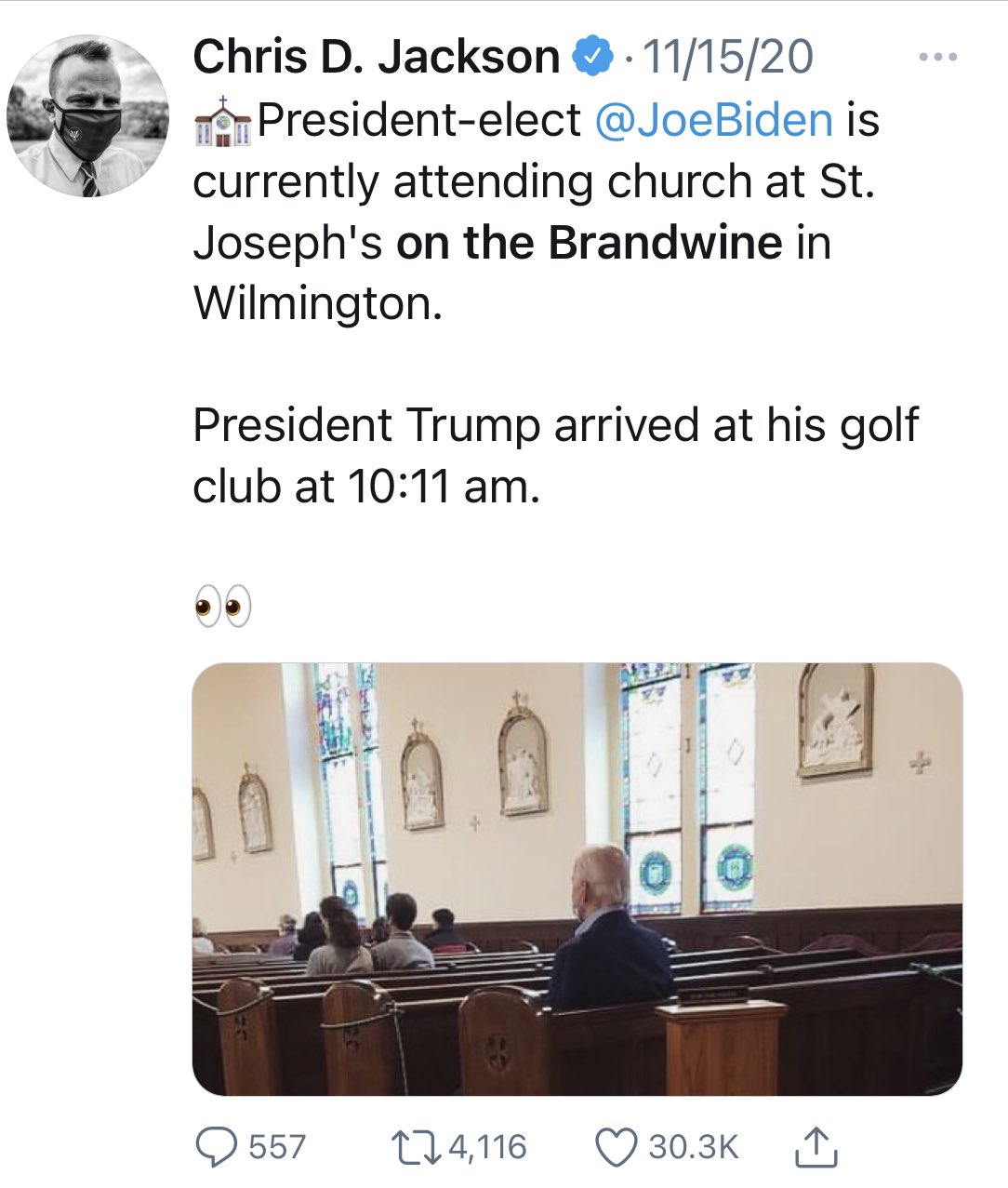 Question: When is the very act of winning a Super Bowl “racist”?  – Answer: When you’re Tom Brady and it’s Black History Month. At least, according to hundreds of BLM twitter nitwits, who took to the social media platform to air their protests of pasty-white Tom Brady securing his 7th Super Bowl victory.

From a story at SummitNews:

No, this is not the Onion.

Brady led the Tampa Bay Buccaneers to victory over the Kansas City Chiefs to claim a personal 7th Super Bowl win, prompting outrage due to the perception that Brady once supported President Trump and the Chiefs’ quarter-back being black.

Many Black Lives Matter supporters scolded Brady for having the temerity to win, suggesting he was “racist” for doing so.

This compilation of enraged BLM tweeters goes on and on, and is far from comprehensive.

You just cannot make this stuff up, folks.

Today’s Short-Term Memory Update – The amazing success of Donald Trump’s “Operation Warp Speed” may not impress American leftists, for the simple fact that they are constitutionally incapable of admitting Trump was right about anything. But the undeniable, historic success of that effort certainly does impress left-wingers in the rest of the world.

You don’t have to believe me: Take French President Emmanuel Macron’s word for it:

From a story at JustTheNews.com:

When a French president offers public praise to the United States, it’s bound to turn heads.

Emmanuel Macron, who several times publicly squabbled with former President Donald Trump over the course of Trump’s presidency, openly expressed admiration of the Trump administration’s Herculean efforts to develop, test, manufacture and distribute a coronavirus vaccine on a national and eventually global scale.

“The Americans did this very well,” Macron told media in January. He confessed at that time that he was “very admiring” of the Trump administration’s “extremely innovative model” of vaccine production.

That “innovative model” has led to an explosion in vaccine distribution. Pfizer — the manufacturer of one of two vaccines approved for use in the United States — has already distributed 65 million doses of their vaccine worldwide, and expects to be able to distribute up to two billion by the end of the year. Moderna, whose vaccine was also approved for use in the U.S., hopes to have a billion doses by the end of the year.

Vaccines from both companies have already been administered over 35,000,000 times in the U.S., according to CDC data. By contrast, the European Union — with a 35% larger population — had as of Friday reported roughly 12,750,000 doses administered, according to data compiled by the EU.

Macron himself last month admitted that the European Union was less equipped than Washington to mobilize such a logistical effort. The European Commission, he admitted, had been called upon “to do something that isn’t within its competence,” in contrast to the relative proficiency of the U.S. government.

Oh. But instead of rewarding President Trump for this incredible success story, you are supposed to believe that American voters went out in record numbers to replace him with a brain-addled sock puppet who has been wrong about every damn thing for the last 50 years.

Sure you did. You betcha.

Hey, what could possibly go wrong? – Nevada Democrats are preparing to sign the death warrant of the American Republic with a bill that will allow Big Tech firms to set up their own “autonomous zones” in locations throughout the state. I kid you not: the freaking Governor himself – in utterly worthless communist Steve Sisolak – admits the bill would allow companies to form separate local governments in the state that would have the same taxing and regulating authorities as county governments.

Nevada is going to get dystopian real fast. https://t.co/zuF2mQ7a4E

From a story at Rebel News:

Nevada Democrats are working on legislation that will provide tech companies the ability to form their own autonomous governments to operate within the state.

Described as “Innovation Zones” by Democrat Gov. Steve Sisolak in an announcement last week, the governor said that the purpose of the proposed legislation was to boost the state’s economy, which has been hard hit by the coronavirus pandemic. The state relies heavily on tourism and the hospitality industry.

If passed, the legislation will allow tech companies to form separate local governments in Nevada that carry the same authority as counties, including the ability to impose taxes, form school districts, and even courts in addition to government services like policing.

“According to a draft of the proposed legislation, obtained by the Review-Journal but not yet introduced in the Legislature, Innovation Zones would allow tech companies like Blockchains, LLC to effectively form separate local governments in Nevada, governments that would carry the same authority as a county, including the ability to impose taxes, form school districts and justice courts and provide government services, to name a few duties,” The Las Vegas Review Journal reported.

“Sisolak pitched the concept in his State of the State address as his plan to bring in new companies that are at the forefront of ‘groundbreaking technologies,’ all without the use of tax abatements or other publicly funded incentive packages that had previously helped Nevada bring companies like Tesla to the state.”

Sisolak mentioned Blockchains, LLC by name and stated that the company had committed to developing a “smart city” adjacent to Reno that would run solely on blockchain technology.

According to the Associated Press, the Governor’s Office of Economic Development will oversee applications for the zones, which are set to be limited to companies in specific business sectors including blockchain, autonomous technology, the Internet of Things, robotics, artificial intelligence, wireless, biometrics, and renewable resource technology.

So, it isn’t enough that Big Tech has been allowed to set itself up as the de facto moderator of speech in our country: Now Democrats want to set these fascists up as literal government entities with authority to levy taxes and restrict other rights of American citizens.

If this bill is passed and upheld by the courts, it is literally the end of the American Republic. This isn’t the camel’s nose under the tent; this is the camel’s rear end defecating in your yard.

A pox on all these Democrats’ houses. Every one of them.

Is it “racist” that 75% or more of the NFL is black? Sane people have to stop cringing at this slur. If everything is racist, then NOTHING is racist. Smile and flip your middle finger at people who use it. Same with “white privilege.” From my experience, the harder one works, the more “privileged” they get.

The way I’ve always seen, the folks calling others racists have nothing else to support their weak azzed arguments/narratives, so their only fallback is to rely on the old standby…holler or call racism/racist.

how embarassing is it to make up reasons, as lame as this, after losing the game?? Oh yeah, everyone is r a c i s t and that’s how they win… pathetic.

February basically sucks, and that’s why sucky Black History month was put there too.

Sweet! The company town is BACK!

“You purge 16 gigs, and what do you get, another day older and deeper in debt”

Black players make up the largest percent of NFL teams, except at Quarterback, why do you suppose that is?

Either the SuperBowl or BHM must go. I propose moving BHM to the 13th month of the year.

Any why the hell are those guys wearing jock straps on their faces??

I wondered the same thing.. maybe it makes them feel fancy.

Interesting how the whole “company town” thing is OK now that some Dem and a “tech” company want to do it. I guess they are too dense to see that it’s all a throwback to coal mining and textile towns a hundred years ago.
Those didn’t work well either, but just like socialism, it was only bad because the new crop of leftists haven’t tried it.

Company store will make a mint on toilet paper when alleged covid 21 hits.

Dave, if you’re going to use my favorite new tag line for conmunist demoncrats, you must use it all. Otherwise I may have to sue. 😛

A pox on them, their houses and their spawn. Fixed for ya! 😀

Years of hate, corruption, and graft fueled by identity politics and lies have turned the democRats in to dangerous idiots. This is what happens when you allow your govornment to be stolen by incompetent corrupt fools that are only in it for themselves

By halftime both teams figured out where their jockstraps went.

I never even turned the stupid bowl on never missed anything as far as I’m concerned .If it made the blm boys mad I’m glad Brady won ha ha ha .Gosh I miss Trump I am so tired of hearing how Creepy Joe went to Mass all he is,is a cino Catholic in name only he does not believe in what the Catholic church teaches about abortion gay marriage or anything else its all for show.Creepy Joe and the Ho are both baby killers liars cheats and what ever else you can think of yet the fake news and the Catholic mafia thinks he is just wonderful how can a baby killer be so great?This country is in for some bad times.

INSANITY IS THE ONLY EXPLANATION. 1. Tom Brady is Racist for winning in February? NO, YOU ARE RACIST FOR THINKING THAT. 2. Tech to have government authority? NO, CHINA IS SETTING UP GOVERNMENT IN NEVADA. just another place I will not be giving my money to

Yet another step in the Balkanization of our late Republic.

Balkanization is simply too gentle a word.

Only if one ignores the ethnic cleansing aspect of the process.

Allowing Big Tech to set up their own mini countries in Nevada? That’s really, really bad. Now imagine that its a Chinese company, one with ties to the CCP.

You have to think what would be the reason to allow this? The kickbacks have to be massive.

How can there even be a black history month when the subjects of this history never even developed a written language? The only history they have is that which was written down by whites.

The Dimocrats are literally giving our Country away! Despicable!

If you click on Matthew’s tweet on Brady winning the Super Bowl you’ll see he was kidding . . . not a good look for you to not check that out before including it in your article

Sarcasm doesn’t go over well on the interwebz and sarcasm about racism seems a bit out of touch right now.

Add to that the inability to have their own police or military.