His campaign for the senate against Ted Cruz in 2018 ended in failure.

His campaign for the Democrat Party’s presidential nomination in 2019 ended in epic, buffonish failure.

His campaign to turn Texas blue in 2020 ended in abject, hilarious failure.

So, naturally, Irish Bob “Beto” O’Rourke, the undeservedly-famous deletant offspring of a fabulously wealthy family married to an even more-fabulously wealthy wife in El Paso, Texas, is now considering mounting yet another destined-to-fail campaign in 2022.

This time, Irish Bob is exploring the possibility of running for the Texas governor’s mansion, against either incumbent Gregg Abbott – who is likely to run for re-election – or against another GOP candidate should Abbott decide to bow out after two terms in office.

Here’s an excerpt from a slavishly-fawning story at the ridiculous Houston Chronicle:

Democrat Beto O’Rourke has left no doubt that he’s weighing a run for governor next year.

“You know what, it’s something I’m going to think about,” O’Rourke said in an exclusive interview on an El Paso radio station earlier this week.

And in case anyone missed the interview, supporters of a political action committee O’Rourke started called Powered By People is circulating it on social media.

The former congressman from El Paso, who lost a close race for U.S. Senate in 2018, told KLAQ host Buzz Adams that Texas has “suffered perhaps more than any other” state during the pandemic and criticized Gov. Greg Abbott for a “complete indifference” to helping local leaders try to save lives.

“I want to make sure we have someone in the highest office in our state who’s going to make sure that all of us are OK,” the 48-year-old O’Rourke said. “And especially those communities that so often don’t get the resources or attention or the help, like El Paso.”

So, hey, looks like we’ll have Irish Bob to kick around again in 2022.  Fan girls and boys on staff at the Chronicle, the Texas Tribune, the New Yorker and Vanity Fair are no doubt already outlining their future feature stories on their punk-rocker crush.

And before anyone sends me a nasty note saying that last remark isn’t fair, let me answer in advance: Why yes, yes it is completely fair and incisively accurate, and you’re a pea-brained nitwit if you don’t agree.

I’m sure Soros will give him another 100 million to blow.

He will probably ‘win’ if they get HR1 passed.

As an 8 year Texas resident, I see it changing just in my short time here. The suburbs for the most part are firmly Red, but the big metro areas are blue. The countryside is Incredibly Red, and that’s not going to change anytime soon. Beto is a joke, but so is Biden/Harris, and look what happened there. Fellow Conservatives, DO NOT OVERLOOK THE THREAT!!!

All Bozo bater has to do to win is run as a RINO.

All kidding aside, the Left took over Georgia and Arizona last year; Texas with a less than stellar Governor, offers them a real opportunity to be flipped blue.

PS: Maybe the Betobater is destined to be a three time loser, but his race against Cruz was entirely too close.

Bill in Houston
Reply to  Gregg

Beato spent EIGHT TIMES as much as Cruz did. Still lost.

With half of Mexico voting in the next Texas election, I am quite confident in Beto’s odds. 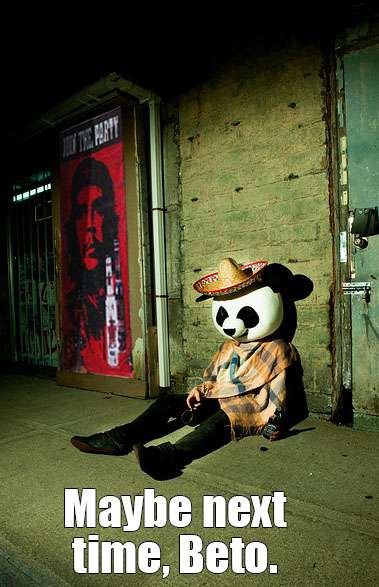 I agree with everything but one sentiment. He’s about as much a punk-rocker as Justin Bieber. True punks would have curb stomped his candy ass long ago, and we would not be talking about him at all. G.G. Allin he ain’t.

do you mean to infer that an overload of ridiculous tattos don’t make somone a punk rocker, as if being a ‘punk’ is a worthy goal?