More proof Democrat voters have no idea what they’re voting for. – How many Democrats who voted for China Joe Potato Head Biden thought they were voting for this when they entered the voting booth?:

Yes, friends, the dementia-addled sock puppet occupying the White House reversed President Trump’s order lowering the cost of a variety of prescription medicines on Friday, including some that are crucial to millions suffering from diabetes and allergic reactions. This from the party that claims to be the advocate for healthcare in America.

From a story at Daily Wire:

The new administration will apparently re-evaluate the executive action from President Donald Trump toward the end of March. It remains unclear if it will be reinstated.

“This freeze is part of the Biden administration’s large-scale effort announced this week that will scrutinize the Trump administration’s health policies,” the report noted. “If the previous administration’s policies raise ‘fact, law, or policy’ concerns, the Biden HHS will delay them and consult with the Office of Management and Budget about other actions.”

A report for Bloomberg Government said the Biden administration is on a “different page” about curbing drug prices than the Trump administration, noting of the Biden team awaiting “at least a dozen lawsuits … over Trump-era moves to lower drug prices”:

Yes, the Biden people are “on a different page,” i.e., they’re reversing a policy that actually worked and will replace it either with a policy that massively increases the cost of these drugs – as the cost of every drug in America increased thanks to Obamacare – or with no new policy at all.

If you’re one of the dimwits who voted for Biden expecting a man who has been in government for half a century without ever making anything better for the American people to somehow now suddenly start making things better, you are the problem. Frankly, you deserve whatever misery he throws your way. But the millions of other Americans who aren’t complicit in this farce don’t deserve it, and that’s on you, too.

Remember this incident, in which Biden told a union factory worker that “I don’t work for you!”? Well, what part of that did you nitwits not understand? 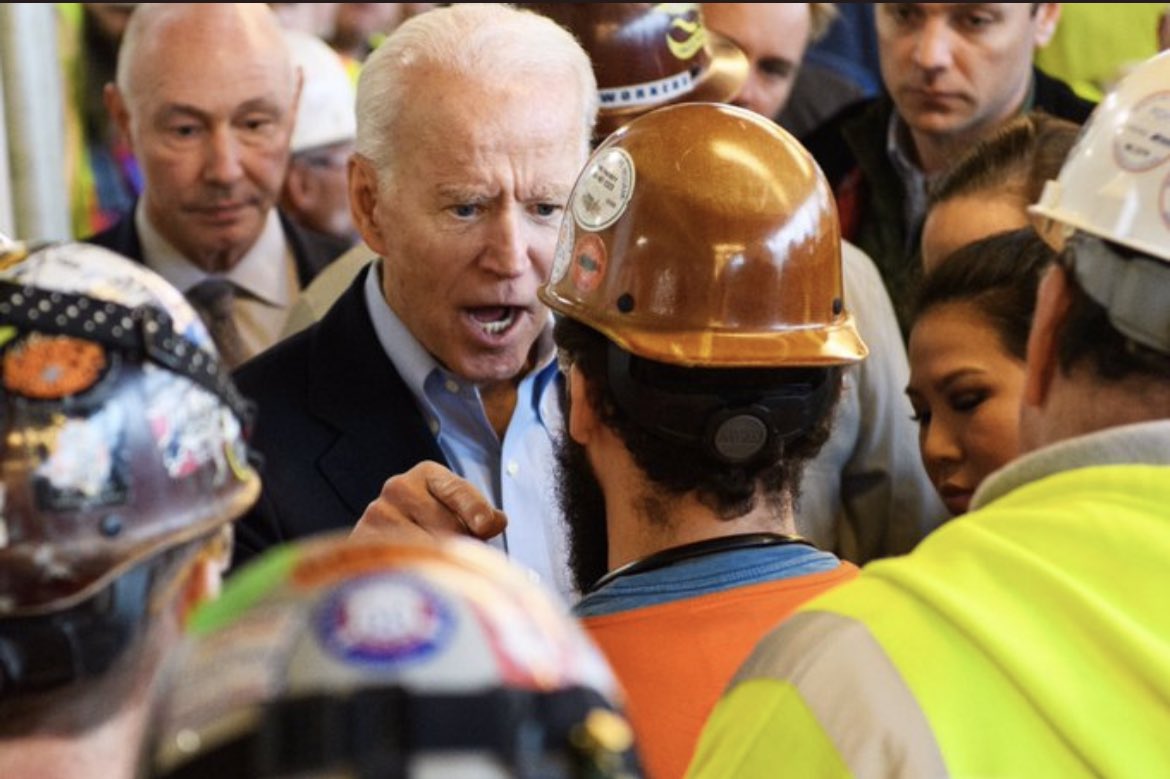 Democrat voters have no idea what it is they’re voting far, Part II – The people of New Mexico are suddenly all verklempt today after the Swamp’s designated Sock Puppet signed an order last week imposing a senseless 60-day moratorium on new leasing on federal lands and waters in the United States. Seems that those New Mexico dimwit voters didn’t realize that about half of the oil and gas production in their state that pays for about half of their state government each year is produced from … wait for it … federal lands, and their state is now facing a big budget gap that will only grow larger thanks to China Joe’s demented act.

Hey, New Mexico, you voted for this. You get what you vote for. In this case, thousands and thousands of people will be out of a job. Biden's pause on oil cause for big concern in New Mexico #BetYouMissTrumpNow https://t.co/Kf2wewxUOv

From a story at Fox Business:

Top Republicans in the state as well as local leaders in communities that border the Permian Basin — one of the most productive regions in the U.S. — say any moves to make permanent the suspension would be economically devastating for the state. Half of New Mexico’s production happens on federal land and amounts to hundreds of millions of dollars in royalties each year.

Congressional members from other western states also are raising concerns, saying the ripple effects of the moratorium will hurt small businesses already struggling because of the pandemic.

“During his inauguration, President Biden spoke about bringing our nation together. Eliminating drilling on public lands will cost thousands of New Mexicans their jobs and destroy what’s left of our state’s economy,” Carlsbad Mayor Dale Janway told The Associated Press on Friday. “How does that bring us together? Environmental efforts should be fair and well-researched, not knee-jerk mandates that just hurt an already impoverished state.”

Steve Pearce, chairman of the state Republican Party, said drilling was beginning to pick up in New Mexico’s share of the Permian Basin because of rising oil prices. But he said he’s concerned that activity could evaporate.

“I think we’re going to see companies choosing not to invest in New Mexico and take their jobs and drilling to Texas just 3 miles away,” Pearce said. “They can just scoot across the border where they don’t have federal lands.”

Chairman Pearce, a former GOP member of congress, hits on a key part of this story that New Mexico Democrat politicians like to ignore: Texas is right next door, and Texas isn’t held hostage by half of the state being owned by the feds. The Permian Basin is a massive geographic area almost as large as the entire state of Wyoming, about 3/4ths of which lies on the Texas size of the border. The impact of Biden’s moratorium on federal leasing and his coming ban on fracking on federal lands will almost certainly result in companies focusing on drilling wells in Texas and reducing their activity in New Mexico.

Whether they realized it or not, this is what New Mexicans voted for when they went 55% for China Joe. After all, it wasn’t as if he and Kamala Harris made any secret about their intentions during the campaign. As is always the case with Democrats, they always telegraph exactly what they plan to do to you – all you have to do is pay attention to exactly what they say.

New Mexicans didn’t pay attention, and so the schools and hospitals and all sorts of programs oil and gas revenues have been delivering to them will suffer, and so will the people. Biden’s attitude about it all? “I don’t work for you.”

It is well known fact that democrat voters are not as bright as conservative voters. The ones who voted for Biden prove this statement… – The Altar of Deceit

And parents and grandparents who voted for Biden “had no idea” they were voting for a guy who was going to mandate that full-functioning males (self-proclaimed “females”) had to be allowed to beat their daughters and granddaughters up in sports games, then hang out later to enjoy the view in the girls’ locker and shower rooms

Dem voters: “Consequences? No one told me there would be consequences!”

There is a 2010 size wave coming. The only question is whether it will be a Republican wave or a 3rd party wave. One thing that Trump has done is wake a lot of people up. Jay

Agreed, he pulled back the curtain on how bad it really is…. I am no conspiracy guy but man this is no joke….

I just watched a video of Corn Pop signing executive orders. He opened one and said I don’t know what I am signing, a voice off screen said sign it anyway and he did. Hold onto your socks this is going to be, one helluva ride!

You will reap what you sow…

I hope jolting joe shoves it up your a**es hard without mitch’s (KY) “compromise ” jelly.

Look for the NM donkey’s to raise your taxes bigley to make up the review shortfall.

Stop writing articles that say Joe Biden was elected by voters. Your initial premise is wrong creating a straw-man argument. It was fraud. Nobody voted for Joe.

Only Dominion and those in cemeteries or China.

Oh there were folks who voted for him. Just not in the numbers that are claimed. It’s estimated he actually got around 50 million real votes.

And yes, there was fraud, a lot of it. It’s how the conmunist demoncrats roll.

I know people who voted for him. And people who believe he caused an erection at the capital. They believe what they hear on tv and everything a Democrat says because of Trump derangement syndrome. But I understand your point that he won because of the fraud on top of these lost minds.

A retired Schoolteacher and two Welfare Rats are the ONLY people I know (who I’ve talked to) that voted Biden. Every other Democrat in our families which is nearly everyone, voted for President Trump. Trump won by a MASSIVE landslide, while the Citizens of America allow it to occur.

There’s always a bright side if you look for it. While the Biden Presidency is going to suck for everyone, the bright side to all of this will be seeing those who voted for him lose everything they own. Can’t afford food? Can’t afford gas? Finding out your daughters have been raped by an illegal alien, and then hear he was released without bail? Just remember, you did this to yourselves. You can’t blame anyone on the Right.

Oh they’ll try though. You bet there will be conmunist propaganda talking head out there spinning it somehow. It’s what they do. Deflect and point their finger
elsewhere

Saddest part is? Many won’t learn. We had 8 years of Obama, and yes we got Trump from it. But many people are too ignorant to accept responsibility for their actions. They will blame the politician not their vote. And go so far to say Trump would be worse contrary to all facts and logic. I can already hear the excuses from the first week of “I told you so”.

As usual, great analysis. Thanks for putting the hammer down on Potato Head every day.

As a New Mexican, I can tell you first that the clueless Demorats here have no idea where state revenue comes from. It just magically appears as far as they know or care. Second, New Mexico went red in this last election, but sadly, we have an abundance of Dominion vote tallying machines here so we never had a chance.

I desparately want to move to Florida myself, but I’m stuck in The Land of Entrapment, because this is where I foolishly built my business. Moving out of state would require starting from scratch, again, and at 57 I’m not too keen on eating beans and rice every night again for the next 5 or 10 years. Ugh.