Well, the Big Tech purge hit in earnest on Friday evening, as President Donald Trump’s account was banned from Twitter and Facebook, and those two Orwellian firms joined with Apple, Google and Instagram to purge thousands of conservative-leaning accounts under the guise of a joint effort to prevent the spread of disinformation. This is perhaps the single most blatant example of mass anti-trust behavior in the nation’s history and the government is powerless to do anything about it because Mitch McConnell refused to force the repeal of Section 230 of the Communications Decency Act into the Defense Authorization Act last month.

But elimination of accounts on these leftist platforms was far from the extent of yesterday’s Big Tech putsch: Both Apple and Google notified the owners of Parler that it would also be cancelled from their platforms unless it adopts the same sort of highly-discriminatory thought and speech controls used by Twitter and Facebook. Users of I-Phones and Google Pixel phones found themselves unable to download and use the Parler app, and that’s just the beginning.

Hilariously, Apple executives gave the following explanation of the company’s assault on Parler:

“We have received numerous complaints regarding objectionable content in your Parler service, accusations that the Parler app was used to plan, coordinate, and facilitate the illegal activities” at the US Capitol on 6 January, Apple wrote in an email to Parler executives. “The app also appears to continue to be used to plan and facilitate yet further illegal and dangerous activities.”

ummmm…what about Facebook, then? Facebook has been used to facilitate all manner of violent crimes, including the planning and execution of mass riots, an array of terrorist attacks that have killed hundreds of U.S. citizens, and a sad litany of too many rapes and murders to chronicle. If you can’t remember Apple issuing any similar advisory to Jeff Zuckerberg, well, that’s because it’s never happened.

All of this took place simultaneously with the delivery of a speech read by China Joe Potato Head Biden, in which he classified President Trump and all of his supporters as Nazis who deploy the Joseph Goebbels technique of the “Big Lie,” which of course just happens to be the Democrat Party’s main stock in trade. 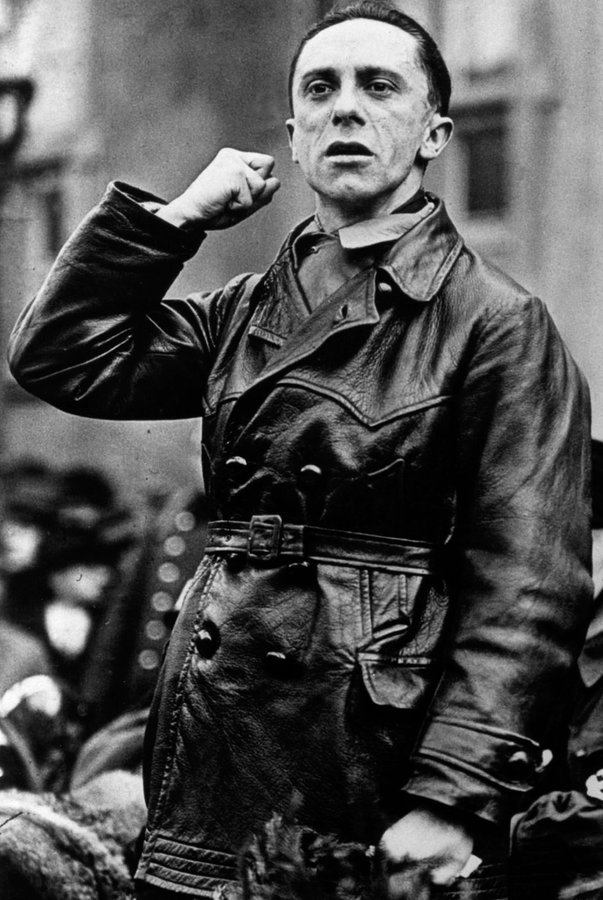 Goebbels, of course, used the technology of his day to advantage his Nazi Party exactly in the same manner as the Big Tech oligarchs of today are deploying theirs in concert with the strategic objectives of the Democrat Party. The Nazis ended up murdering 6 million Jews largely unnoticed by the rest of the world in part as a result of Goebbels’ careful planning and propaganda efforts.

This is, of course, the kind of brutish crackdown on free thought and speech that we would expect to see from the communist government in China. That should come as no surprise given that every one of the corporations engaging in the putsch is a ChiCom client company. It has been glaringly obvious for years now that the ambitions of these exact companies to capture the enormous Chinese market was causing them to conform their corporate policy actions to the demands of their ChiCom masters. And now, here we are with the entirely predictable ultimate outcome.

The GOP had four years to do something, anything, to crack down on the abuses of these tech monopolies, which became increasingly restrictive and overt throughout the four year term of President Trump. But, of course, the Republicans did nothing because most GOP members of congress don’t really see any problem with this kind of corporate behavior, and because those GOP congressmen and senators hate their voters every bit as much as the Democrats do.

President Trump created an account at Parler last night, and no doubt millions of his 88 million Twitter followers will do the same in the coming days. My own inbox is filled with request by friends to follow them over to Parler, along with other platforms like Gab, MeWe, CloutHub and others I’ve never even heard of. Thus do the Democrats and their Big Tech allies accomplish one of their main goals: To splinter the opposition into an array of competing factions.

Back in August of 2018, as it was becoming increasingly evident that the Democrats might be able to win a majority in the House of Representatives, I wrote about my hopes that President Trump would use his second two years in office to do an imitation of Teddy Roosevelt and clamp down on the growing threat to our nation that these Big Tech oligarchs represent. Unfortunately, the President, beset by all the controversies the Democrats and media kept swirling around him and having saddled himself with an Attorney General who was nothing more than a Deep State tool, failed as miserably as congress to take any real action in this arena.

Anyone who thinks a Biden Administration, with a very liberal Merrick Garland ensconced in the Attorney General’s office, will make the slightest move to rein in the brutish, un-American actions of these Big Tech monopolies probably also believes that China Joe was elected in a free and fair election.

Keep your heads on a swivel, folks: The assault on your freedoms is just beginning.  This will only get worse.

Well, had to uninstall Firefox today. The head honcho at mozzilla has
made it clear Trump and other “bard actors” must be removed from the internet.

Only the beginning. With control of the Legislative and Executive, they will enact amnesty for all illegals, open the borders for all who want to come here (and dangle government assistance in multiple areas as an incentive to entice cheap labor to swarm). They will continue to use the pandemic to curtail free assembly and destroy middle income businesses to force as many as possible into reliance on government programs to survive (a new dependent voter class). Bars, restaurants, and churches will continue to be locked down; they don’t care about you singing hymns or corporate worship and prayer…just don’t want people together where they can discuss what is going on and what might be done to oppose it. They will do all that they can to crush the fossil fuel industry and force money into green technologies to enrich their friends and supporters; Al Gore and others are salivating at the prospect. Health care will be another lever for government dependency and control. Look for other efforts to ensure Democrats stay in power in perpetuity and to not have to rely on election fraud to do so, since that is a weak link in their power train.

First, they came for the Trump supporters…

But the enemy of my enemy, and if you can’t beat them, join them and then beat them.

The way to do this would be to organize and declare that you are an antifa chapter. You would be praised and never prosecuted and if they messed with you the other antifa would go nuts and start rioting.

Donkeys doing exactly what they accuse Trump and his supporters of doing is called PROJECTION.

The BIG LIE, if told often enough becomes the truth in the minds of gullible ignorant people of which there are about 200 million (60%) in the country.

Sad but true. Parler (and Facebook and Twitter and everyone else) has a web interface that you can access from any web browser. Just type http://Parler.com into the address bar at the top, or get there via your search engine.