Former long-time Dodgers Manager and one of the all-time great baseball personalities Tommy Lasorda passed away late last night. Although I grew up in Texas, I’m a lifelong Dodgers fan, and just wanted to share a couple of stories here.

Although I’m a lifelong Dodgers fan, the first time I ever became aware of Tommy Lasorda was in, I believe, 1975, when he was the 3rd base coach and the Dodgers were making a run at the World Series. The game was on NBC with Kubek and Garagiola calling it, and they had Lasorda miked up in the coach’s box.

Lasorda chattered non-stop while the Dodgers were batting, and every time 3B Ron Cey came up, he talked about how hot Cey was at the plate. Cey hit 3 homers in that game, and Lasorda called every one of them. Twice, Cey hit the homer on the very next pitch after Lasorda predicted it. The third one took two pitches. It was the only game in which Cey hit 3 homers during his career.

It was one of the most remarkable moments I’ve ever witnessed in any sporting event.

Shortly after that day, Lasorda’s name came up in an episode of “Welcome Back, Kotter”:

When my kids were very young, I would use that comeback anytime someone said “hasta la vista” to me, which in Texas happened quite often. They quickly caught onto it, and it’s been a running gag in our family ever since. A few years ago, my then-2 year-old granddaughter tried to mimic it, but came back with “stormy novito!” instead, so now that’s the running gag in our family.

The Dodgers played their NLCS and World Series games in Arlington, Texas this year due to all the COVID stuff, and Lasorda lived in a hotel nearby for a month so he could attend the games. That no doubt took a lot out of him, but I’m sure he’d have given anything to see the Dodgers win it all one more time. He went into the hospital shortly following the last game of the World Series, and was only able to return to his home around the first of the year. He died there last night, at the age of 93. 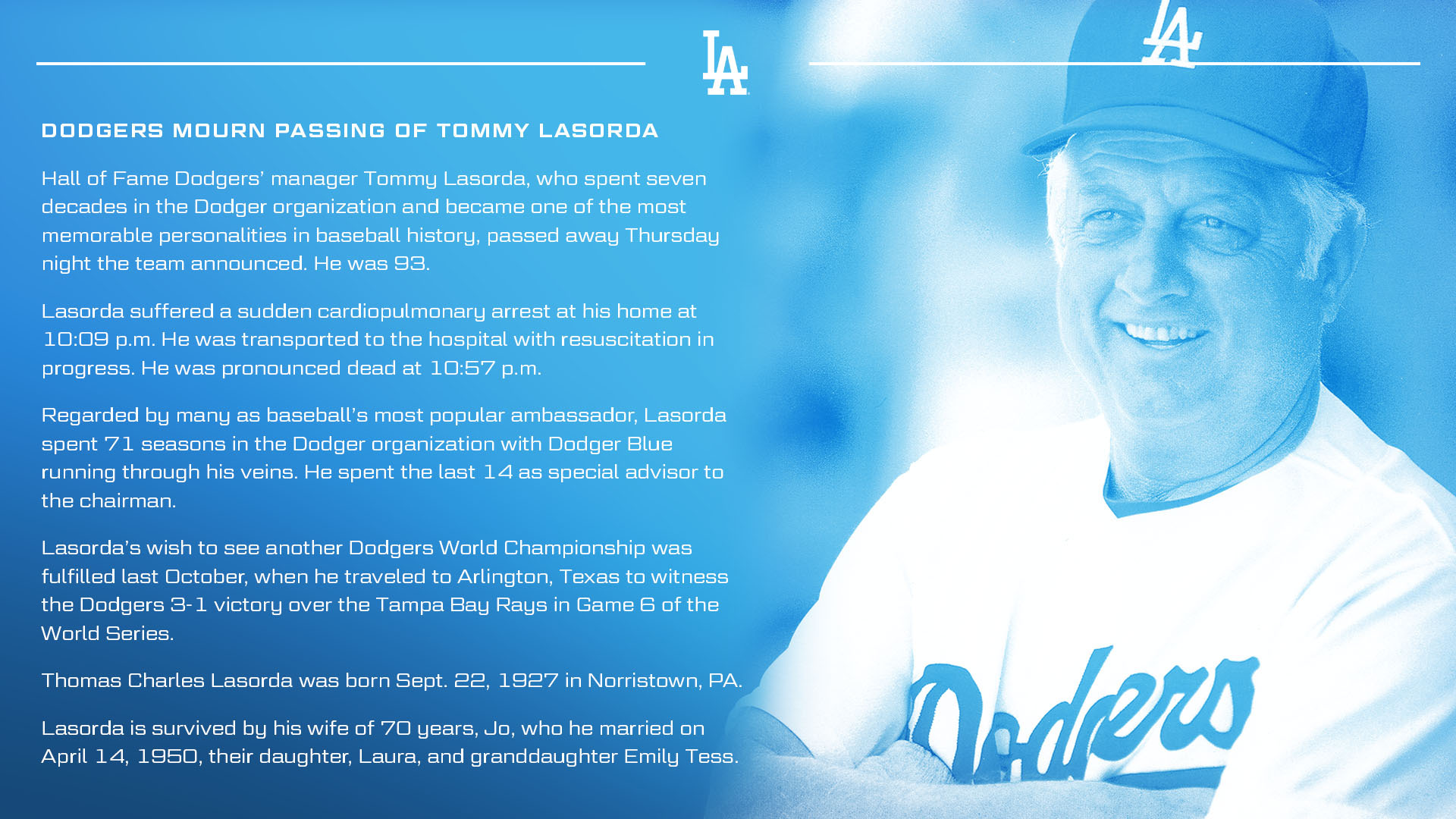 A fantastic manager and just one of the all-time great baseball personalities, and one of the game’s great ambassadors.

The funniest thing I ever saw Lasorda do was in Philadelphia when the Phillie Phanatic was doing his shtick between innings along the opposing team’s dugout. He lined up faux opposing teams batting helmets (he did that with every opponent) and began smashing them with a tamper. At some point the Phanatic was also mocking a life sized Lasorda stuffed doll in a Dodger uniform. With genuine indignation, Lasorda ran out of the dugout and physically accosted the Phanatic grabbing the doll and smacking him with it forcing the Phanatic to jump on his little four wheel off road vehicle and flee before the helmets were all smashed.

Tommy was really pissed at the Phillies’ organization disrespecting his Dodgers that way.

No one had more passion than he for his team.

Grew up in Bakersfield, CA before it was called CALI. It was highly conservative state, with Ronald Reagan as the governor. BTW, San Fran was fairly conservative, until the hippies moved in. Dodgers were always my team. In Bakersfield, you had split loyalties. Some people liked the Giants or As and some liked the Dodgers. Went though some grief when they lost the Series in 1974 to Oakland, 1977 and 1978 those damned Yankees. Got revenge 1981 and 1988 on both of those teams. Lasorda was a class act. Lasorda (and Vin Scully) are the standard of baseball and he will be missed.

Though I am not a Dodger fan, I liked Tommy Lasorda very much. I’m glad he got to his Dodger Blue win their first title since he won it in 1988 against the highly favored Oakland A’s.

RIP Tommy, a great ambassador for baseball and a class act.

Never a Dodgers fan but always had total respect and admiration for Lasorda. He was a very entertaining person that you couldn’t help but love!