In what is almost an unbelievable turn of events, even for this horrible year of 2020, the official Twitter account for WalMart just outright attacked GOP Senator Josh Hawley today.

After Senator Hawley became the first GOP senator to make it known that he will object to the January 6 certification of the Electoral vote, WalMart weighed in with a response that reads “Go ahead. Get your 2-hour debate. #soreloser”. 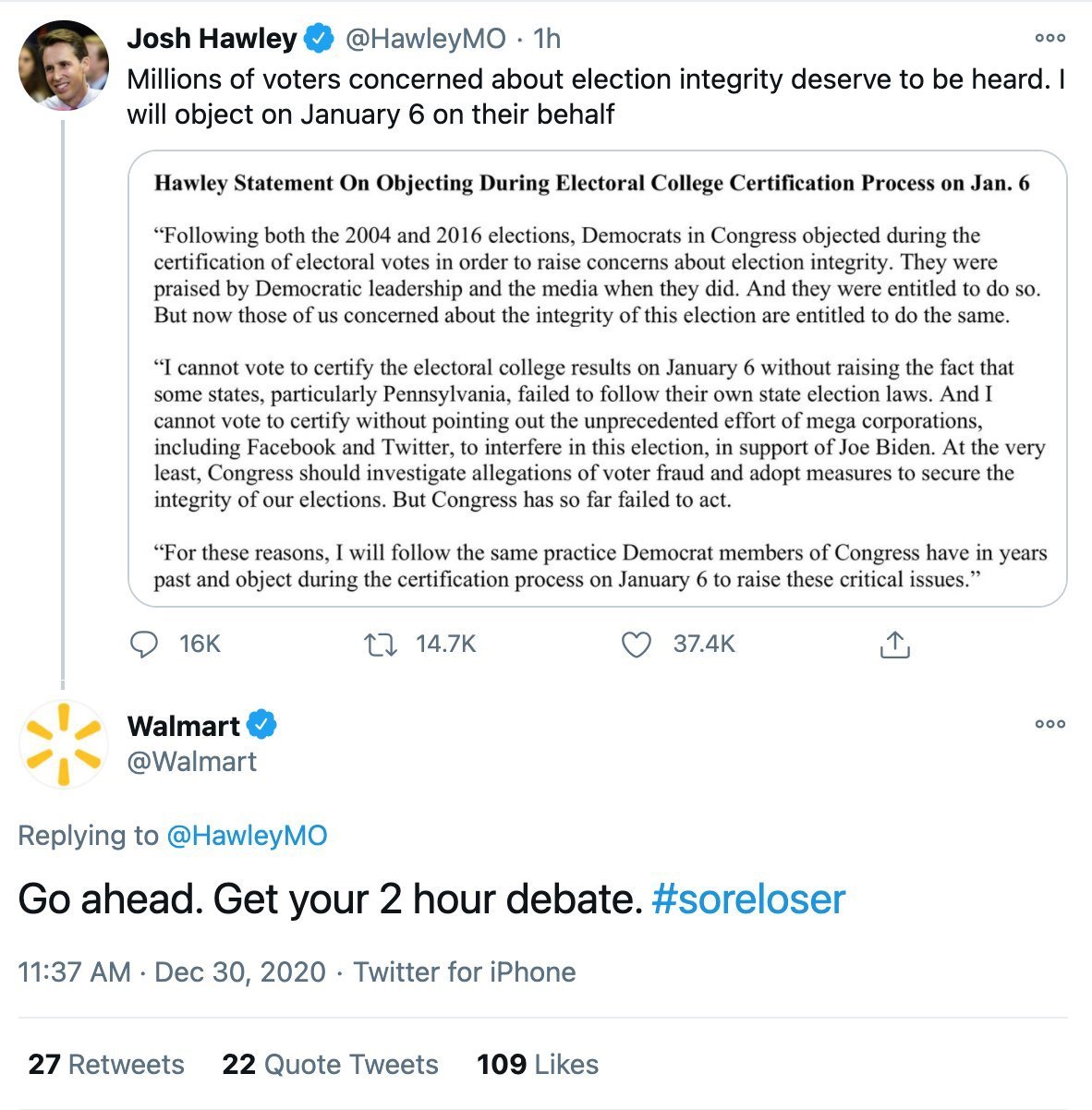 That a major corporation would weigh in on a political issue with a partisan political response is no surprise. We see that happening all the time.

The surprise here is that the partisan political response comes not from some Big Tech firm, but from WalMart, a retail chain of mega-stores that appeal largely to America’s lower middle class shoppers, a very large chunk of which makes up a very large chunk of the support base of Donald J. Trump.

WalMart’s decision to take this hyper-partisan stance on this crucial issue now gives Trump supporters a prime opportunity to extract some accountability from this major retailer by engaging in a simple boycott. While boycotts on media outlets like CNN and MSNBC are completely ineffective, given that such media outlets don’t want to attract conservative viewers and only serve as loss-leaders for their giant corporate umbrellas, a boycott of a profit-motivated retailer such as WalMart by 75 million Americans would likely be extremely effective.

Making Wal-Mart an even more prime target for such a boycott is the fact that it is a company that sources roughly 70-80% of its products not from U.S. suppliers, but from China:

So, all you Trump supporters, listen up: If you currently include WalMart or Sam’s Clubs among your regular shopping routine, the time has come to cross it off your list. You have never been handed a more prime opportunity to extract a little accountability from any major corporation.

UPDATE: About 2 minutes after I posted this piece, Senator Hawley just posted the following reply to Walmart:

Thanks ⁦@Walmart⁩ for your insulting condescension. Now that you’ve insulted 75 million Americans, will you at least apologize for using slave labor? pic.twitter.com/oYJP4Cv2qE

I find it funny that people complain that Walmart sells stuff made in China especially when all the rest of the retail stores out there do the same. Walmart simply sells it cheaper. Think I’m weong? Verify it for yourself. Next time you’re in a store buying things check out and see where those items are made. China, Vietnam and Mexico. Hey, if you don’t want to buy Chinese stuff don’t. But don’t blame Walmart for selling the same stuff other stores sell at a higher price.

“But they underpay their employees.”

Well no one forces those employees to take those jobs now do they?

“They drive small businesses out of business.”

No, the liberal government does that and it’s also called competition. Small businesses give you better customer service and they can also reduce their prices. Just wait until government has shut down all small business over a political pandemic. What then?

And for all of you Karens who have become self appointed Covid mask police, get out of my face unless you are a law enforcement officer. You have no legal right to question me about anything. The owner or their management can ask me to leave and if it’s done illegally I’ll let the court handle the matter. So, unless you are the owner, their management or law enforcement, kindly mind your own business. If it bothers you or you’re afraid YOU can leave.

If you lay a hand on me, unless you are law enforcement, you risk me arresting you. Deal with it. I have made six citizen’s arrests in the last ten years on Karens who thought they knew the law and all of them did jail time.

I don’t go looking for fights but I don’t back down from them either.

There will be a lot of farm and feed stores and hardware stores who will be rejoicing at Walmart’s foolishness; other grocery stores will be celebrating as well; clothing stores on the verge of bankruptcy now have a fighting chance; auto supply chains will now have less competition, and tire stores will rejoice.

There’s nothing better than when an enemy defeats himself. Visions of NYC dance in my head like sugar plums:

As to the city my ancestors – the Dutch – founded: the smoke you will see won’t be from burning towers. As for Walmart: her arrogance has defiled her, and like the city, she claims that she “will never become a widow.” Sea captains will shudder.

And small businesses on Main Street will rejoice. Wall street had better relocate, and kick Walmart off the exchanges, just as they’re having to close themselves to the Chinese PLA. .

I will be happy to boycott Walmart along with everyone else…

Ok, I buy most of my food and basic needs from Walmart because they are close, convenient and relatively inexpensive. I’ll check out Target, and smaller chains for prices etc., but are they any better? Are they any less “global”? For example, Aldi’s, soybeans had “Made in China” on their frozen soybean food packages several years back which is why I quit buying stuff from them. SOYBEANS from China? Really? Isn’t food the one thing we export TO China??? The other thing about Aldi, they reminded, or made me think about was what the future Soviet style food stores in America will soon look like: basic staples, no frills and few choices. The store also reminded me of the community souks when I was stationed in Bahrain, or at the military commissaries or base exchanges with long lines and poor selection and not at all cheaper.

The smaller chains/stores just don’t have some of the stuff I need. I had already schiffcanned my Sam’s Club membership as I refused to pay more for milk and sugar there than at their sister-store Walmart, AND pay a yearly membership fee just for the privilege of spending more for the same stuff I can get cheaper elsewhere. I told the manager I was going to cut up my Sam’s credit card and he gave a perfunctory sorry but didn’t really care.

I will make the effort to make routine food purchases at some other store and I will express my anger at the dweeb at Walmart corporate for posting such a partisan message directly to the manager. I will let him/her know that my Walmart shopping will be drastically reduced from here on out because of that insult to me and the 75 plus million Trump voters. I will also remind him/her that wherever I worked I was told, and it was company, and even military/government, policy to never endorse or denigrate, or associate any political entity with the company brand. Even Home Depot forbad wearing sport teams ballcaps and the apron as it might offend the customers.

I will cut my Walmart purchases by at least 70% and I hope everyone here does also, but more importantly, we need to tell the store managers our clear and unequivocal feelings and maybe, just maybe the word will get back to corporate. If I remember correctly, Target reacted very positively to the transgender bathroom issue a couple of years back and didn’t seem to give a damn when they lost about 10% of their sales for a quarter or so, so it may well be a case of us having to pick our poison as to which anti-American Chinese retail outlet we will patronize.

“but more importantly, we need to tell the store managers our clear and unequivocal feelings”

Spot on… telling them why you won’t shop there is a necessity as well. The more people tell them they more they will start to listen. imo, if people started writing emails or letters they’d start listening sooner rather than later, why?? Because they know there are 70 plus million PO’d Trump supporters… thats a LOT of customers to ditch…

We haven’t darkened the door the day wallies came out and endorsed the lgbtqdrynda community. Costco, same… not paying them to be a customer. We shop small stores and look at all the labels and if it says china… won’t buy. Even tell the floor staff why I’m not going to buy the product. Some think us crazy… some understand and agree.

Whats amazing is we don’t lack for anything. Our food is better, we buy farmers market, local, and we grow some as well. We used to be consumers just spending money on basically impulse and junk. Now… don’t miss the junk, and we have more money because we buy better quality stuff, non-chinese, and so it lasts longer. That or we simply do without or find an alternative.

Its actually easier now for us. its a learning curve. I too hope conservatives get onboard this as well. Starve the chinese govt of cash.

Its still a war…

MOST of the Walton Family is Conservative, but they also have some entitled jugheads. It happens.

Been saying for a long time now… STOP FUNDING THE ENEMY…

Stop buying from scamazon, wallies, costco, or ANY company that sources their product thru china, period. Write your kocal companies an email and thank them for producing their products onshore and that you are a loyal shopper.

It takes a bit of effort and costs a bit more. You’ll find out what you need and what you can do without. Learn to live with less is actually not a hardship and not hard to do. AND…

Its a war… don’t send the enemy you money. Think of the money spent buying products made here as the same as war bonds. Support the war effort here… buy american.

Try to find something in Walmart that isn`t from China….I`ll wait.

I bought a hose for the house made by an American company here in the good old USA.
Nice one too. Well made and worth every penny. But yeah, pretty much mostly chicom crap.

Walmart; stupid is as stupid does.

I may have shopped at Walmart once this year; that would have been before the Wu Flu hit. Who knew it would be my last time?

Well damn. We didn’t shop much there, but there were a couple of things we liked to get there that we couldn’t get elsewhere. Oh well, guess we’ll have to use Amazon. Oh wait, we quit using them too. *sigh*