How rigged is the system in Georgia? – So rigged that state judges rule that it is illegal for election officials to purge out-of-state voters from the voter rolls. Check out this story:

From the story at Politico:

A federal judge in Georgia on Monday ordered two counties to reverse a decision removing more than 4,000 voters from the rolls ahead of the Jan. 5 runoff elections that will decide control of the U.S. Senate.

The judge, Leslie Abrams Gardner — the sister of former gubernatorial candidate Stacey Abrams, a prominent ally of President-elect Joe Biden who has led voter registration efforts across the state — concluded that the counties appeared to have improperly relied on unverified change-of-address data to invalidate registrations in the two counties.

The bulk of the registrations that the counties sought to rescind, more than 4,000, were in Muscogee County, which Biden won handily in November. An additional 150 were from Ben Hill County, which Trump won by a wide margin.

Get that? When it is delivering hundreds of thousands of mail-in ballots that no one requested and that are to be used by Democrats for massive voter fraud, the Postal Service is good. When its data is used to clean up voter rolls – as it has been for two centuries now – the Postal Service is bad.

And good Lord, Stacey Abrams has a sister who is a judge. 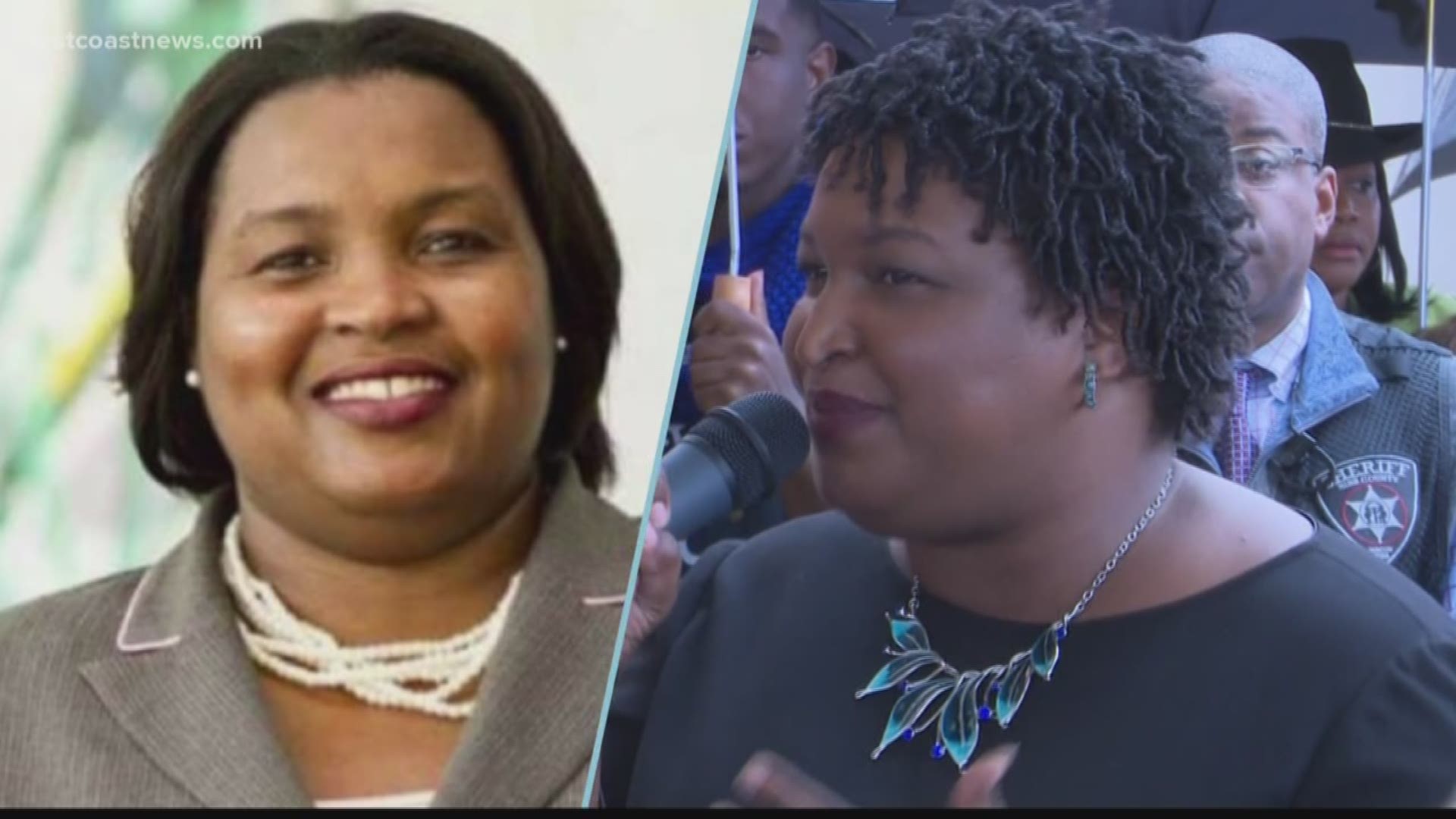 You just could never make this stuff up.

But Democrats are not the only problem in Georgia’s voting system, or even the biggest problem. That designation must go to Governor Brian Kemp, who, while serving as Sec. of State, executed his state’s deal with Dominion Systems to use their rigged voting hardware and software, and current Sec. of State Brad Raffensperger, whose office willingly and with obvious malice aforethought enabled the massive fraud that took place in their state.

In an interview with Newsmax yesterday, Dick Morris did a great job of succinctly summing up how Raffensperger helped Stacey Abrams and her fellow Dems pull off the scam:

“Raffensperger refused to allow double-verification for signatures on absentee and mail-in ballots and required one only, even though it is expressly required by Georgia state law to have two,” Morris said. “Raffensperger refused to invalidate ballots that were not signed on the outside outer envelope, or ballots where the outer envelopes were destroyed. Which means you have a ballot voting for Biden, but you have no idea who cast it, and whether he’s [or she’s] eligible.”

“He refused to give the Republican Party, as statutorily required within a reasonable time, a list of the people who voted so they could see who died and who moved away and challenge the results,” Morris said. “He allowed the election inspectors and watchers to throw Republicans out during the balloting process or to confined them to what they call the ‘coral’ in the distant part of the room where they couldn’t see the paper ballots or the verification.

“These are serious problems.”

Now, here’s the thing to understand about the twin senate runoff elections that are about to happen in this bipartisanly corrupt state next Tuesday:  With one small exception designed to count the fraud faster, the exact same voting procedures deployed during the general election are still in place and the same Dominion machines and software are still being used.

What’s the one exception? Vote “counters” will be required to start counting the early votes – more than 1.4 million have already been “cast” – no later than December 30, rather than waiting until Election Night, according to a report at JustTheNews.com:

Counties in Georgia will be allowed to begin tallying absentee and mail-in ballots prior to the Jan. 5 Senate runoff elections, according to a spokesperson from the Georgia Secretary of State’s office. This policy reflects a change from the controversial Nov. 3 election process.

Counties will be permitted to begin their ballot count two weeks ahead of the election, and will be required to start their count by Dec. 30. The goal of the policy is faster election results on Jan. 5. In November, the Georgia vote took days to tally before the state was prepared to announce unofficial results.

Other than that, nothing has changed despite the tons of proof of pervasive fraud in the system.

And it’s all being run – at least publicly – by people who call themselves Republicans.

Every Democrat, regardless of how anti-Pelosi, anti-Schumer SOUNDING they are when on the campaign trail in swing/red districts/states are bought and paid for and controlled by Schumer’s and Pelosi’s deep state bosses.

The same goes for all the “conservative” sounding GOP traitors; they are owned by the Mitches and whichever fraud runs the House Republican Caucus whether they be in the majority or minority. The left will allow certain reliable GOP squishes to win knowing the Collins’, Grahams’, Romneys, Sasses, Murkowskis and others of the Grand Old Party will ensure nothing conservative or beneficial to the country happens without Trump, or someone like him busting a gut to make a tax cut for example happen.

This is why I said earlier this month that I hope President Trump creates a new clear and unambiguous MAGA Party and only allows the ten or so percent of the real conservative GOPers to join and vet and exclude any of the RINO hacks that have screwed him and us for the four plus, and in our case, screwed us for decades. And while Mitch should get some credit for getting Trump’s supposed conservative judges confirmed, ANY decent Majority Leader (Cruz) would have done the same thing. And judging by the Trump SC justices refusing to even hear the Texas’ case, I have to wonder just how many of HIS judges are the real deal. Judging from his cabinet and other picks, I’d say it was 50-50 at best. Even the Bushmasters batted .500 (Thomas/Souter and Alito/Roberts) on SC judges. What is the batting average for Democratic appointed judges being lefties? I can’t remember a single DEMOCRATIC JUDGE (Mister Roberts there are POLITICAL judges you schmuck) betraying their cause when it mattered.

Please someone name me a Democrat appointee who was or became conservative and actually upheld the constitution in any significant way even once since at least FDR. We cannot ‘win’ when approximately 3/4 of the judiciary is packed with lefties or ambivalent ‘moderates’ who always swing the wrong way when it matters. And now the soon to be expanded courts will get packed with even more hacks.

It really surprised me that ACB was able to sail through the confirmation process for RBG’s seat relatively easily; apparently everyone in the senate knew the fix was in and the SC would soon get at least two more radical judges effectively cancelling out whatever conservative vote might come from ACB and the other Trump judges. I don’t know why team btfsplk/roundheels, Schmucker and Klink would bother to increase the courts as obviously the Left is getting what they want. Unless, of course, they just want to spike the ball after Lucy yanks it away from Charlie Brown just before he tries to kick it.

18 but these men lie in wait for their own blood;
they set an ambush for their own lives.
19 Such are the ways of everyone who is greedy for unjust gain;
it takes away the life of its possessors. [Proverbs 1]

If Americans stand for this staggering corruption…we get what we deserve.

Couldn’t agree more… Repugnants are a dying parasite. Its would actually, IMO, be better if a new Patriot party were to form. Get away from the stench of the gop and disavow openly those stanky rino’s and the spineless that sat quietly by and said nothing.

These dirtballs are equally guilty of stabbing Trump and never supporting the Peoples choice and mandate, I would label them traitors. No room for then in a new Patriots Party.

Its a war… remove the spies and traitors within the ranks.

The war is going to start soon. Prepare.

Michael Spinks, porcine version, has a sister who is a judge? Since low IQ runs in families, I can’t wait to read about her decisions. Bet there are some doozies.

Lots of commenters on a previous thread talk about RINOs, as if they are fresh out of the box and that they haven’t been run by the Deep State for decades, just like the Democrat party – Kemp being one of the Republican versions. Got news for you folks: HW Bush was Deep State; Dubya was Deep State on steroids, McCain was Deep State and Romney was Deep State squishy style. Where are the surprises? Trump changed the party.

The surprise is that 72% of Republicans want a Trump-based party, because the press makes it look like President Trump is out-of-step with Republican voters. He is obviously in synch with us. I don’t appreciate people turning their backs of the President, because he has been fighting as hard as he is able. There is no one here or anywhere who could do a better job of exposing the Deep State. In fact, using the words “Deep State” or “Globalists” less than a decade ago would have gotten you a wellness visit in some places. Even the Deep State and Globalists have acknowledged their own aims and ambitions – just like we told you 10 years ago.

But you want proof that the Republican voters aren’t the problem, but the party leadership is?

We see Mitch and we already knew he was a Swamp Creature who is sticking a fork into the President and claiming that he’s done; we know that Graham was a close buddy of McCain and can never be trusted; we know that Mitt Romney is a coward and a weasel and we know that Republicanism in traditional forms is DOA. There is no future for Romneys and Mitch will be removed or retire, since he’s as solid as a year-old apple..

Fact is, with most of Republicans strongly endorsing Trumpism; if 72% decided they want the new Republican vision, and don’t want to go back to endless wars and outsourcing our jobs, the Old Guard will be replaced or the party will die. Bill Crystal is the new Timothy Leary.

If the Mitches and other wimpy bitches can’t defend the Constitution, and can’t see that the right to free and fair elections is not an optional aspect of our national identity, a new party will be formed without them,. Either way, the Old Guard is dead and already stinking. They may take Trump down, but as he falls, they’ll burn.