Let’s just start with this meme found on Twitter this morning: 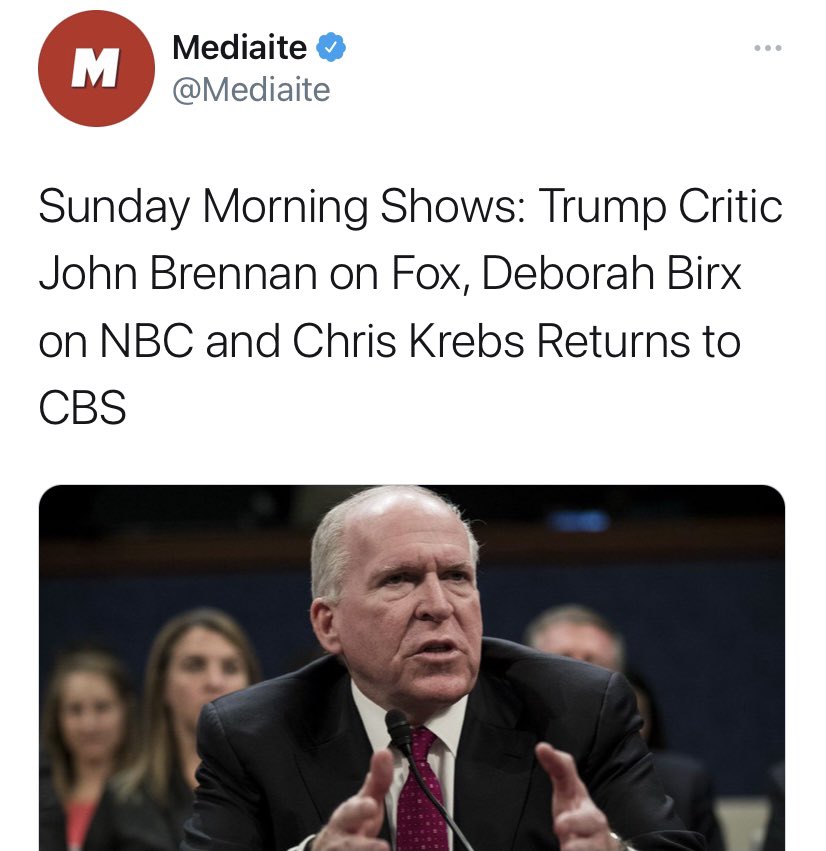 Will this be a case of the underling questioning the boss? We know the CIA has plants throughout the mainstream news media, a practice in which it has engaged since its creation shortly after World War II. Anyone who thinks Fox News is free from such skullduggery hasn’t been paying much attention to the content on Fox News lately. Not that anyone can blame you for that, of course.

But here’s the thing: In a just and free society in which laws mattered, John Brennan would be in federal prison, not making Sunday morning appearances on Fox News or raking in millions from his contributor deal with MSNBC. But that’s all been lost in America over the past 25 years, aided and abetted during the Trump Administration by worthless Attorneys General Jeff Sessions and William Barr.

To exemplify just how abjectly worthless Barr and his “Special Counsel” John Durham have been, late last week Director of National Intelligence John Ratcliffe told an interviewer that he and his staff have provided “thousands” of classified Intelligence Community documents to Durham over the past several months.

From a story at BizPac Review:

Director of National Intelligence John Ratcliffe says he’s turned over “thousands of documents” to U.S. Attorney John Durham during his investigation into the origins of the so-called “Russian collusion” probe of the 2016 Trump campaign.

In an interview with the Washington Examiner published Thursday, Ratcliffe said he’s counting on Durham to uncover the truth about what the DNI believes is monumental corruption and wrongdoing by officials tied to the Russia investigation.

However, he added, that doesn’t mean all of what he’s passed along to Ratcliffe should be declassified and revealed due to the sensitivity of sources.

“Between my predecessor Richard Grenell in an acting capacity and myself, we have declassified most of the intelligence community documents that would be suitable for the public to see, that wouldn’t jeopardize sources and methods,” he told the outlet.

“There are others, many many documents — I think it’s been out there that I’ve provided literally thousands of documents to John Durham, but many of those do contain sources and methods that we can’t make public for a number of reasons, including to jeopardize any investigation that’s going there,” Ratcliffe continued.

“So I think the level of cooperation — I’ve given them everything that they’ve asked for,” he added.

Ratcliffe has indeed given Durham and Barr what they’ve asked for. No one should have expected this public servant to do anything less.

But what has been the result? What has the American public gained from Ratcliffe’s and Grenell’s stalwart efforts to end the information roadblock at the DNI’s office? Bupkis. No action from Durham whatsoever. No indictments, no wee hours of the morning arrests, no perp walks, none of the criminals who staged a long, slow-motion coup d’etat from 2017 through 2019 in any real jeopardy of ever being held accountable for their crimes against this nation.

The DOJ is an absolute travesty of injustice, and the failure to identify and hire a patriot to serve as AG will be remembered as Donald Trump’s single most damaging failure during his first term in office.

News you will not see reported on any national corrupt news outlet:

Think about that for a second: Why does the national news media refuse to report on the thousands of human trafficking arrests made over the past four years by federal, state and local law enforcement agencies? Is it just because it makes the Obama Administration, which showed no interest in doing anything effective to bust rings like this, look bad? Or is there something more sinister at play here?

It’s a good and valid question, and someone should be forced to answer it at some point.

Oh, well, color me shocked. Not. – It’s always about the money on the radical left, folks, and the Black Lives Matter communists are no exception. The Washington Times reports that some regional BLM chapters are up in arms about the fact that their national leadership appears to have made millions of dollars intended to fund the looting and burning of Democrat-run cities just disappear into the ether.

From that story at the Washington Times:

Black Lives Matter is facing a rebellion within its own ranks as regional affiliates seek greater control over the movement and demand answers about where millions of dollars in donations have gone.

After years of tensions between the national organization and local outlets, the rift went public this week with the release of a statement by 10 BLM chapters accusing the top brass at the Black Lives Matter Global Network Foundation of failing to open their books or share the wealth with the rank and file.

“For years, there has been inquiry regarding the financial operations of BLMGN and no acceptable process of either public or internal transparency about the unknown millions of dollars donated to BLMGN, which has certainly increased during this time of pandemic and rebellion,” reads the “Statement from the Frontlines of BLM” posted Monday.

“To the best of our knowledge, most chapters have received little to no financial support from BLMGN since the launch in 2013,” the statement reads.

In addition to the D.C. chapter, the missive was signed by affiliates in Chicago, Denver, Indianapolis, New Jersey, New York’s Hudson Valley, Oklahoma City, Philadelphia, San Diego, and Vancouver, Washington. The chapter in Louisville, Kentucky, said it supported the chapters.

Hilarious. Could not happen to a nicer bunch of Marxist thugs.

re: BLM infighting; “…If Satan casts out Satan, his kingdom cannot stand”.

As I’ve ben predicting for a long time on these threads:

Night of the Long Knives Redux

Useful idiots, once no longer needed, are considered useless eaters, unstable and problematic, and disposed of quickly and efficiently. These are not warriors, but bully-boys who wilt at the first sign of resistance. Mommy’s basement will provide no shelter as they’re either starved or culled from the herd..

Wonder why the Elites are promising black folks the vaccine first? Just another extension of their Tuskegee Syphilis Study, which went for 40 years until a whistleblower exposed it. And epidemiological study – the very definition of evil as it was practiced.

They want to use the vaccine to eliminate the black population. The Left and the so-called “Elites” have always been racist to the core. Look at PP.

No vaccine for me.

Screw the approvals…have a 6 month rotation of Grenell, Rudy, and Flynn between the DOJ, FIB, and CIA and don’t even bother trying to get a permanent appointment. Would be a great cross pollination of the leadership of the most corrupt agencies in the government.

Admiral Rogers should also be brought back into service, if he’s willing, since he saved Trump at the very beginning, alerting the incoming President that he was being monitored in all his communications. I don’t know how Rogers is these days, but he did a heroic deed and saved Trump and by extension, America.

There are some old-school patriots still around. Just look for the people Obama fired.

The first one to go should be whomever recommended these loosers to the President. I wonder if it is the same swamp looser that recommended Halspet and Wray? I’m sorry but the President’s picks are getting tiresome and a threat to him and to us.

Infiltrated at Every Level

What else did he have to work with? The swampers would never approve someone from Trump’s civilian circle.
Many people warned us about the Mockingbird media and even Eisenhower warned of too much influence in the MIC and you could add the media to the that complex along with education.
Joe McCarthy is a great American hero and alphabet soup agencies are not staffed by people who love mom, apple pie, America.

He should have picked Rudy instead of Jeff Sessons. Jay

That’s who should replace Barr, not Flynn; let Flynn take over for the MIA director of the CIA, and let Grenell run the FBI.

It’s only after-the-fact that evidence of how bad these choices actually were, especially Lame Duck Sessions, who made himself lame as soon as he took office. Barr? Wray? Repos wouldn’t support anyone else, they said. Couldn’t get anyone else out of committee.

So it’s not Trump’s fault; he had to trust somebody. The fact that Paul Ryan and Mitt Romney stabbed him in the back repeatedly, after promising a lot of things shows how a lot of elements of both parties need to be investigated. Was there blackmail, or payoffs?

Questions:
Why was Paul Ryan such a traitorous weasel?
Why did Sessions actually recuse himself?
Why is Barr suddenly taking a dive?

Epstein holds some of the pieces to the puzzle, because Epstein was only the tip of the spear. Barr met with him not long before he was “killed” (transported to a coastal South American country.)

The fact is, Barr and Sessions DID do something to sweep out the pedos that Obama protected (imagine how bad it would get with a pedo in the Whitehouse!) Human sex trafficking is something the press isn’t interested in, because…well, Dave said it, in a way: the CIA found the habits of the rich and perverted too easy a method of control to give up.

So Sessions and Barr might have wanted to do something right, but somebody got ahold of something, maybe their private parts or parts of a relative, and Barr reverted to his old Ruby Ridge ways. Wray was installed because nobody the President picked was allowed to take the seat.

Why is he still there? Why is Wray still at the FBI? Call it another form of blackmail: impeachment threats, when Trump prevails. Wray must be put in a blender, along with a few (or more than a few) other officials. Call it a “Traitor Smoothie.” .

Perhaps Barr did cut Durham’s leash, in a fit of regret for the things he’s done or not done. Let’s hope that Durham can do more than make a scary scowl.

Just Me
Reply to  Q-D'Etat

Qusay and Uday Hussein availed themselves of a wood chipper; less mess than a blender.

Trump’s Attorney General picks have been the worst choices he’s made and possibly the worst of any president. Something’s rotten in Denmark, it makes no sense, and it makes no sense that he hasn’t fired them. What is compelling him to hire his enemies and keep them on? Has he made some sort of deal with the devil?

Barr is going to resign shortly….you heard it here first.

Trump does seem to suck at picking people. However, he only serves at the leisure of the RINO senate and is only allowed an AG who serves the RINOs, not the American people.

“But what has been the result? What has the American public gained from Ratcliffe’s and Grenell’s stalwart efforts to end the information roadblock at the DNI’s office? Bupkis.”

Mr Blackmon sir… Have you forgotten the very significant catch of Clinesmith?!? Or the roundup of those that defiled some statues, for which Barr is still camped out watching for any further statue violations. Or perhaps the finger wagging he gave to Portland and Seattle before pulling back. Surely you couldn’t possibly be just ignoring these nation changing events. It appears you are either hugely bias’d or are simply expecting more than what can be reasonably expected. /s off

Seriously tho, why even bother writing about this sacko…. you get the idea.