Despite the Trump legal team’s declination to reveal its entire case to the corrupt news media, we know some of the hard evidence of massive Democrat voter fraud it has at its disposal, since much of it is already in the public domain. Here is some of what they have.

First of all, despite its’ current protestations of innocence, Smartmatic’s founder and CEO, Antonio Mugica, admitted in 2017 that its system had been used to create at least 1 million fraudulent votes for Venezuelan socialist strongman Nicolas Maduro:

"…this would not have occurred if the auditors of all political parties had been present at every stage of the election."https://t.co/1efiKPT1WP pic.twitter.com/S2o7KdeWpi

This OANN segment does a good job of describing the amazing vulnerabilities inherent to the Dominion voting machine system:

Back in the old days – you know, before Trump came along – the leftwing news media was just as concerned about Dominion’s lack of security and incredibly suspicious origins as we are today:

Everyone whacked out about Sidney Powell’s comments on Dominion voting systems should read this HuffPo report from 2010. I just read through it and am blown away. Regardless of if this is proof that fraud occurred, it’s a major national security concern. https://t.co/m3PVQhotnz

Here’s how the system was used to shove through tens of thousands of votes for Biden in Michigan and Wisconsin in the wee hours of the morning of November 4:

Here. We. Go.@realDonaldTrump tweeted our WI chart but now let's go to Michigan. The key momentum shift happened on Wednesday morning at 6:31AM.

A batch of nearly 150K votes came in.
96% went for Biden pic.twitter.com/KXJLeExdud

Here's another view of the Michigan data.
The arching lines are the total cumulative vote adding up for the candidates Tues-Weds.

Notice the normal jump when a batch comes in for 57% Biden and the ABNORMAL jump when in comes in 96% for Biden at that 6:31 AM mark. pic.twitter.com/j9nWycj8XU

Here’s the Wisconsin chart to which Hart refers in his first tweet:

Look at this in Wisconsin! A day AFTER the election, Biden receives a dump of 143,379 votes at 3:42AM, when they learned he was losing badly. This is unbelievable! pic.twitter.com/nhiLMmyHBn

Note that both dumps came shortly after the ballot-counting processes in Michigan and Wisconsin – and several other states – had been mysteriously paused for a couple of hours. You can be sure that, had that enormous tranche of votes been reversed, and handed the President Wisconsin’s electoral votes, every corrupt media outlet in America would be hyper-focused on it and alleging blatant fraud, which it clearly is.

Democrat vote “counters” in Pennsylvania and Georgia tried to be a little more subtle about their election theft, avoiding a huge single dump of Biden-only ballots in favor of repeatedly shoving through the same batches of smaller numbers across several days.

These spreadsheets compiled from New York Times data show how batches of Biden ballots numbering 6,000 (or multiples of 6,000) in Pennsylvania and 4,800 in Georgia were repeated “counted” through the Dominion machines in the days after Election Day: 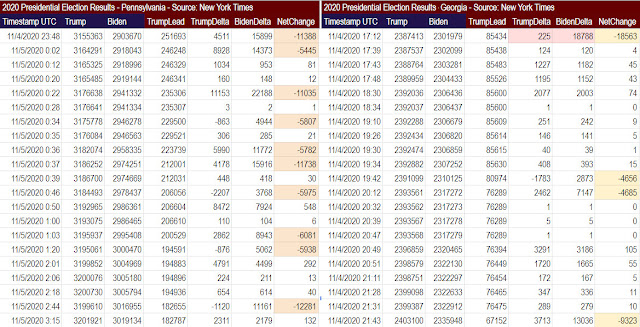 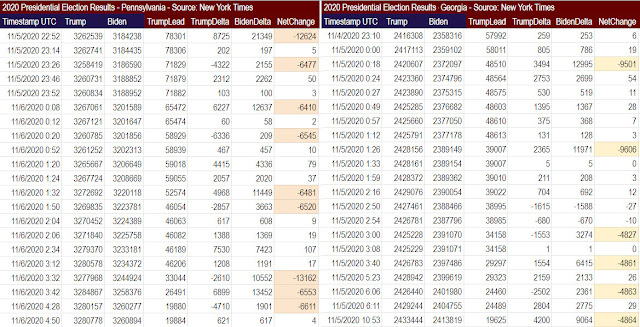 This and much more is the kind of data Trump’s lawyers plan to present to the courts in various states as their cases move forward. It is in addition to all the witness testimony they have gathered, along with clear evidence of thousands of dead voters and ineligible voters somehow voting for Biden.

– In Nevada, former state Attorney General Adam Laxalt says his team has identified at least 15,000 individuals who voted in that state and also voted in California or other states on November 3, a classic tactic deployed for years by the Harry Reid machine there.

– In Georgia you have multiple witnesses testifying to have seen boxes full of Biden-only ballots that appeared to have been machine-created.

– In Pennsylvania, 680,000 ballots were counted while GOP election observers were prohibited from doing their jobs by Democrat election officials.

– In Michigan, Pennsylvania and Wisconsin, multiple U.S. Postal Service employees have signed affidavits in which they swear under penalty of perjury that they were instructed by superiors to back-date postmarks on ballots for Biden – a federal felony.

– In Milwaukee, Detroit, Philadelphia, Atlanta, Phoenix and Las Vegas, dozens of heavily-Democrat precincts in which the number of ballots supposedly cast vastly exceeded the number of registered voters living there.

But in the face of all of this evidence and much, much more, you are being brainwashed by the entirety of the corrupt national news media – the same media who spent the past 4 years pushing a fake Russia hoax, a fake impeachment hoax and so many other Democrat hoaxes – to believe that there is no such thing as voter fraud in America and that Biden, the guy who couldn’t draw flies to a butcher shop, won with 10 million more votes than Barack Hussein Obama received in 2008.

You shouldn’t believe that, for the simple reason that it is not believable.

Reporter: "Is the country on the verge of an electoral breakdown?"

The ballots with no down voting are clearly fraudulent. There is nothing to tie them to any precincts. Did they all come from the same precinct? Did 400,000 voters in the same precinct only vote for one thing? Trying to down vote on these ballots would only make the fraud more obvious.

DemocRATs can only win by cheating.

I have no doubt he has been subjected to a lot of pressure. But his thanking the powers that be at Faux News was a tell. His latest behavior indicates he has decided to lie in the bed he has made. So be it. Until he does something more compelling and actionable to show us he is a white hat and willing to walk away, I’m done with him.

And that hurts, as I always considered him one of the last real journalists in existence.

I get that Carlson has to thread a very fine needle given what his network has become, but he better be real careful if he wants to keep his credibility, or he will just become another talking head hack who will be blowing hot and cold.

As Bush Jr. said, you are either with us or against us.

It’s time for those doing pressers for the Trump campaign to start asking these two questions back at the press:

Where were your objections to the Gore campaign contesting the 2000 election?

If there’s no fraud, why are you objecting to the Trump campaign conducting an investigation?

Every time they have a presser, ask them.

That’s our “public education system” doing its job. Indoctrination of the children, who become adults who can’t reason their way out of a wet paper bag. History, civics and critical thinking are not taught anymore. They all sup at the table of the communist echo chamber media, It’s all they know or want to know. Anything else just upsets them or confuses them.

I used to work as a game tech for a family fun center. We hired high school kids and it was an eyeopener for me. The majority of them weren’t even minimally conversant on the Constitution or their rights as citizens. I am happy to say I managed to save a few of them, even got a couple of them to consider enlisting and serving their country, which they eventually did.

Tucker gave in. He sold out in the end. Sad. I thought for sure he’d walk before going dark side.

And by the way, let’s not forget that the same mainstream media that promoted the Russia hoax also is foisting the COVID hoax on us. Damn! I am REALLY tired of being lied to, as well as living with people who guzzle the kool aid and then ask for more.

Adam Schiff and others claimed they had evidence of Russian collusion for years, and when it was revealed that the “evidence” was provided by Russian Intel, bent on screwing up Trump – and the “evidence” was ordered and purchased by Hillary Clinton (a real act of collusion) then where were the demands for an accounting?

We still haven’t seen all of the things Schiff had hidden in the SCIF; we still are being stonewalled by the FBI and CIA: why should we reveal information that they might find a way to destroy? They have no right, nor do you, to have criminal evidence that will (WILL) be used in a court of justice. Do you ask the local prosecutor to spill all his evidence to you and your fake news organization prior to the trial?

Apparently Mr. Carlson has never heard the Intelligence terms “sources and methods.”
Or shall we begin to wonder: “What’s in YOUR closet/wallet, Mr. Carlson?”

A press conference isnt for the press. Its for the people. They said themselves they know the media wont report on the presser but people will still know. Knowledge is power, and the legal team put out what they could for the public to understand something is up.

Ben, either you have not seen any of the presser yesterday, the twits from this article or you are just trolling….

The “Dump” in Wisconsin is said to be from Milwaukee, where we are to believe that they had 84% turnout when historically cities have about 50-60% turnout. Stats don`t lie.

In Georgia there were only 818 “Trump only” votes but there were 95,000 “Biden only” votes….statistically impossible. Liberals are not educated enough to understand this type of evidence.

One way or the other the Supreme Court’s legacy will be cemented.

The question is which way will they go? Will they be known as the one federal government institution that will stand above the fray as they were designed to do, or will they go down in history as just a founding member forever in good standing with the deep state swamp/cesspool?

Fortunately for our cause, Mister Roberts is no longer the swing vote and can either choose to be a ‘white hat’ in a 6-3 decision or be a confirmed swamp dweller in a 5-4 decision.

Another possibility is if it is apparent the SC will go 6-3 for President Trump’s appeal, I would not be surprised to see some or all of the three lib appointees from BJ Clinton and ‘the One’ agree with the majority. I believe that could happen if they have any integrity which I give a 50-50 chance of it happening, but I do seem to remember a couple of lib justices siding with the majority creating a 7-2 decision in certain aspects of the overall Bush v Gore ruling.

Good point, Roberts might tell the “3”, hey, this is going down either way, we need to be united in our decision “for the good of the country”. I could see that happening. It’s all the easier for them if the evidence of fraud is overwhelming, it’d be inexcusable for them not to.