Think you’re getting a fair and above-board count of the vote in the state of Arizona? Think again. The Democrat Secretary of State there – Katie Hobbs – characterized Trump supporters as “his neo-Nazi base” in a tweet she posted in August, 2017: 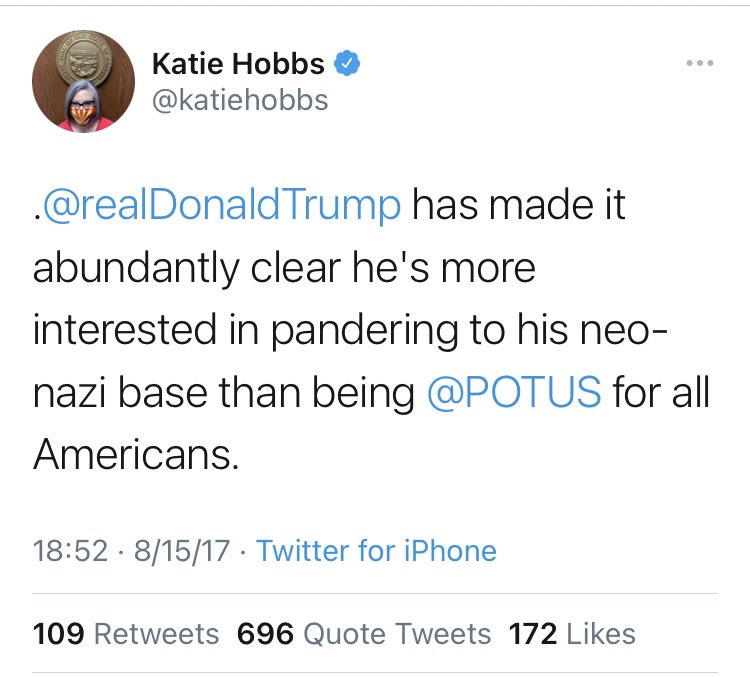 Sec. Hobbs obviously feels very strongly that that characterization is accurate given that she has left the tweet up on her feed for 3 years and 2 months.

When she wrote that tweet, Hobbs was serving as the state senator representing District 24, a seat she held from 2013 through January 2019. Hobbs ran for the sec. state position in 2018, and was sadly elected to that post by the odd voters in Arizona in November, 2018.

In August of this year, the verbose Sec. Hobbs also accused President Trump of attempting to “sabotage” the U.S. Postal Service. From a piece at The Hill:

“In Arizona, it’s against the law to ‘delay the delivery of a ballot.’ I’ve asked [Arizona] Attorney General [Mark] Brnovich to investigate recent changes at USPS, and whether or not the Trump administration has committed a crime,” Hobbs tweeted Friday.

She added, “Our postal workers have a motto: ‘neither snow, nor rain, nor heat…’ I have every confidence that these couriers will work diligently to overcome this political interference and ensure timely delivery of the mail, including election mail.”

As in almost every state in the Union, the Secretary of State in Arizona serves as the chief election officer of the state. This is who is in charge of the vote “counting” in the Grand Canyon State, which I suppose helps to explain why the state appears capable of only counting about 250 ballots per day.

It also helps to explain why no one should just blindly accept that the count of votes in the presidential election are accurate. How can Trump voters trust someone who so obviously hates their very existence?

Yet another stupid Marxist beeoch!

Pfffffttttt! Who is she, again? Oh, I get it, another shitbird commie who thinks she has an opinion worth considering.
Is that her real photo? Bless her poor heart. Whew.

That was a reply to Bill. stupid askimet.

And they abuse history as well. They keep comparing President Trump to Hitler. If he were like Hitler, we wouldn’t have had to listen to all the presstitutes whining these last almost four year, all his political opponents would have been arrested in the middle of the night, never to be seen or heard from again and there would be no election fraud because there would have.

have been no election

Well, it’s nice to be thought of…. What I admire about her is the ability to say that bucket of sh*t is beef stew…. Seriously….

Audit the vote in Virginia too.

Wonder if we get a class action defamation lawsuit going? Let’s see. There’s 71 million of us, so we all sue for $1. That’s $71 million. Think there’s a lawyer or two out there that might help?

HAHAHA – These people abuse the English language so badly…….
NEO means new (so “neo-con” means NEW conservative, etc.)
NAZI loosely translated is more like the Democrats – National Socialist Workers’ Party
The DUTCH had a NAZI party, too, during the WWII era. It was National Socialist Workers’ Party.
So doesn’t that fit Democrats more closely?
What these people are calling Trump and his supporters are – NEW National Socialist Workers’ Party members.
Hmm, sounds like they are calling us Liberals or Socialists? Isn’t that the pot calling the kettle black?
Hitler and his minions were the ones that believed in the supremacy of the German race – not NAZIS in general. The Dutch NAZI party had no such belief. They were formed for workers – socialism.
NAZI doesn’t mean a Jew hating person – it means a socialist. IF you followed Hitler, then yes, you were a NAZI AND a Jew-hater, but one doesn’t mean the other.

Vote fraud is nothing new, and it’s entirely possible that the people of Arizona did NOT elect Katie Hobbs as Secretary of State. This whole thing stinks, and has been stinking for a long, long time. Let’s hope and pray that this brood of vipers can be cleaned out soon and thoroughly.

ANYONE with whom Democrats disagree are “Nazis” or “Neo-Nazis” as Democrat brownshirts in the guise of BLM/Antifa terrorists burn businesses and hurt anyone who opposes their political views! LOL! Democrats don’t even mind being overtly Orwellian because they’ve pretty much banned Orwell’s books…

Katie Hobbs declared War on Half of America. Hang her on LIVE TV.