Before we get into the latest election news… – Stock market futures are going crazy this morning. As I write this piece, the Dow futures are currently up by more than 1500 points:

The corrupt news media will attempt to credit their false elevation of Biden to “president-elect” for this happy news, but the real reason for it is that Pfizer and Biontech released a report early today detailing the fact that their COVID-19 vaccine is proving 90% effective in ongoing tests and could start to become available by the end of this month.

That bit of WINNING is all thanks to President Donald Trump and his Operation Warp Speed. The only impact any Democrat had was to desperately attempt to slow the process down. That’s the truth.

Now, on to Election News…

Just as a reset from a weekend during which the entirety of the corrupt national media monolith and social media giants attempted to prematurely declare a “winner” in the presidential election, here is the actual state of the race as we rise on Monday morning: 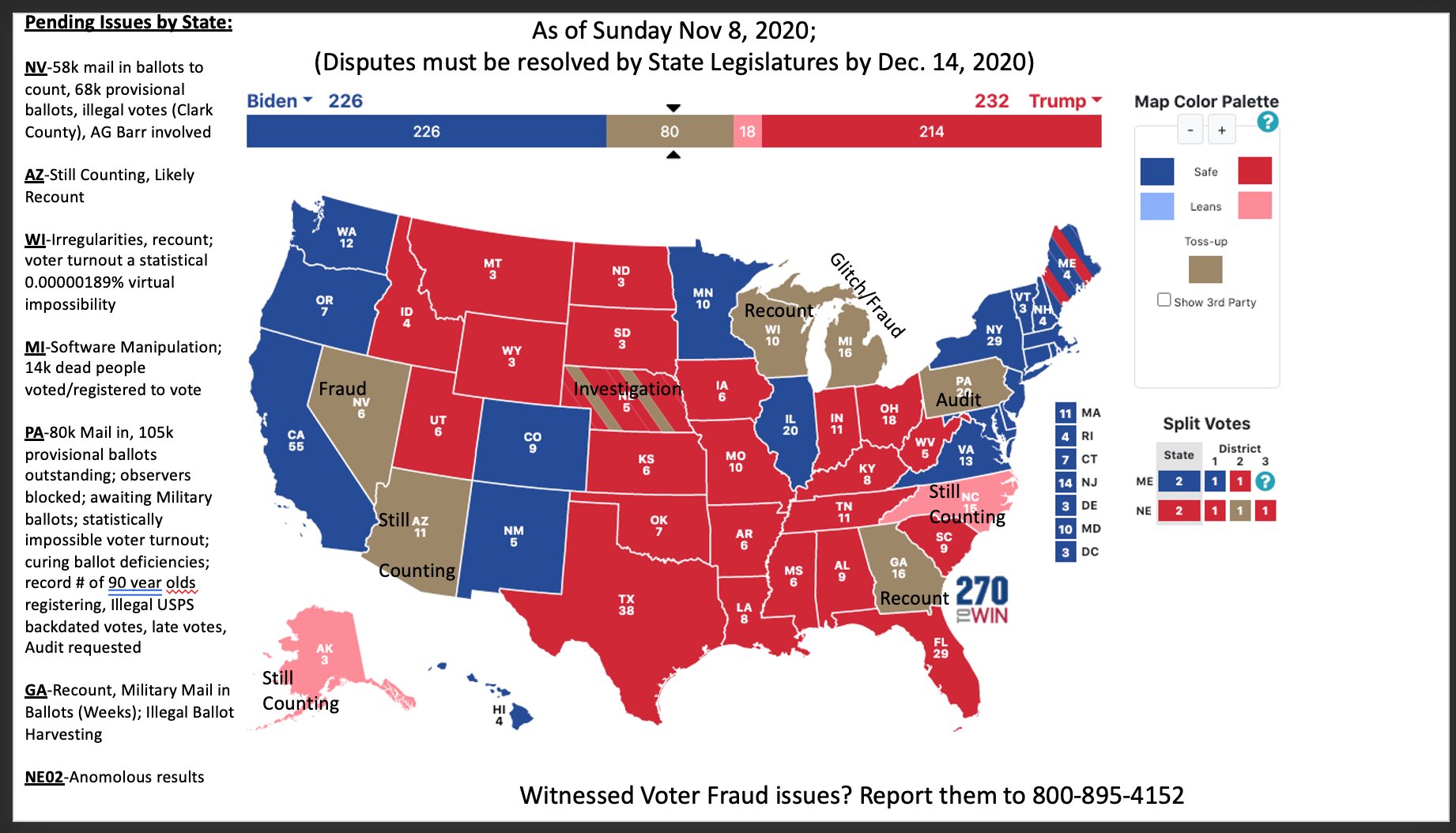 80 electoral votes in 7 different states remain in dispute, and those disputes must be cleared up through the legal process before the votes can be awarded to either candidate. The corrupt media has yet to call North Carolina and Alaska, but that is only because Trump is well ahead in those states. If Biden held the same lead Trump holds there, both states would have been called long ago. Given that Biden has not disputed the vote counts in those states, they are added to the Trump column.

This is the true state of the race: Everything else coming from your corrupt news media monolith is part of their Nazi-style disinformation campaign designed to brainwash you into blandly accepting the results of a stolen election. I’ve been warning you about that campaign since March, and here we are.

And here is another part of that campaign:

Sources close to POTUS tell me he’s being urged by Jared Kushner, Rudy Giuliani, & campaign adviser Jason Miller to hold rallies throughout the US pushing for recounts of votes.

Dave Bossie and WH chief of staff Mark Meadows are urging the president to think about a concession.

Fake Jake Tapper pushing a completely false report that key Trump advisors – including David Bossie and Mark Meadows, for crying out loud – are urging him “think about a concession.” Tapper has ZERO cited sources for this false report, and it was immediately disputed by Jason Miller, who tweeted in response that “This is 100% false. There is no truth to this report whatsoever. CoS Meadows, Dave Bossie, Jared Kushner, Rudy, myself and everybody else are on the same page – we all work for @realDonaldTrump and follow his lead, and there is no daylight between us.”

Tapper wasn’t the only corrupt media figure pushing this false narrative on Sunday, and we can expect him and the others to continue beating this particular drum as the process of challenging these election results plays itself out in court. Because our media establishment is nothing more than a Nazi-style disinformation apparatus.

Meanwhile, indications of massive, blatant voter fraud committed by Democrat officials just continue to roll in from these disputed states. Take a look at this clip of former Nevada Attorney General Adam Laxalt describing how the Democrat election officials in Las Vegas and other Nevada cities rigged an artificial intelligence software application to “match” signatures on 600,000 mail-in ballots that no human eye has seen:

Texas Senator Ted Cruz correctly describes the situation in Pennsylvania to dimwit Katie Couric and the state’s own election officials, and it is epic:

When you’re breaking the law, ignoring court orders, counting ballots in secret & threatening to steal the presidency, it’s not “PA’s business.” It’s America’s business, and we have the right to expect votes will be counted (1) fairly, (2) w/ transparency & (3) NOT in secret. https://t.co/jkkyB0Bc0q

The computer “glitches” just keep popping up in Michigan, and oddly, they all run in one direction:

Another 'Computer Glitch' Identified and Corrected in Oakland County, Michigan, Led to Republican Winning His Race via @gatewaypundit https://t.co/czKul4wdyP

Funny how that works, huh?

And speaking of Michigan, one enterprising person took a look at the dead voters who “requested” mail-in ballots in a single county in that state and immediately found 1,200 such “voters.”

Evidence of real voter fraud has become so ubiquitous and overwhelming in Pennsylvania that the Republican Speaker of the House in that state, Bryan Cutler, sent the letter below to corrupt communist Democrat Governor Tom Wolf on Sunday demanding what we need to see in every one of these disputed states, a full audit and verification of the vote:

Remember, both houses of the state legislatures in Pennsylvania, Michigan, Wisconsin, Arizona and Georgia are controlled by GOP majorities. The authority for determining how a state’s electors are seated and composed is entirely up to those legislatures. If the Democrats in the big, corrupt cities in those states continue stonewalling these legitimate investigations and court challenges, the legislatures do ultimately have the authority to vote to seat a slate of electors different than those who were chosen by a corrupted and invalid election process.

Again, this process is going to go on for weeks. President Trump is already planning to hold more rallies to build support for a full and formal reexamination of the voting counts in these seven states.

As things stand today, there is no legitimate “president-elect” for our country, and no amount news-faking from the Jake Tappers of the world can change that.

So, hunker down, be patient, and be of good cheer.  This is a long, long way from over.

#America will NOT accept #ElectionFraud.
https://rizziallen.wordpress.com/2020/11/10/becoming-venezuela/

It seems that voter fraud is pretty much nation wide.I live in Colorado and you want to see voter fraud these dem/communists in this state should hold classes on how to do it.We have had mail voting in this state for several years and the dem/communists have taken complete control.Very few republicans get elected here of course the republican party here is a mess pretty much in cahoots with the dem/communists.I can’t see any reason to even vote here any more your vote will not be counted or they change it some way dead people vote some people vote more than once and no one does a damned thing.All the dem/communists tell us how wonderful the voting works only if you are a dem/communist and we get shafted.This state is a mess.Denver and Bolder dictate to the rest of the state.

They are already crazy. 😀 All the big blue cities will definitely erupt into lefty crazed violence. If you aren’t in one of them you should be ok. If not, President Trump will be invoking the insurrection act if they do. No future election means he can be “more flexible”.

I don’t understand why no one is mentioning the election fraud in Virginia that followed the exact same pattern as these other ‘contested’ states.

As more fraud is exposed, there will be a good chance of Republicans regaining control of the House of Representatives! That will stop most of the democrats dog and pony show in the House and accelerate the people’s agenda for America that Trump has been campaigning for. They ought to investigate California and Colorado too! Whistleblowers- America is calling you!

Gee, the election fraud claims are listed by Twitter as “Disputed” Are the claims of Biden winning listed as such? I would certainly describe them as in dispute.

I am hanging on to hope that the fraud will be resolved AND the truth will be undeniably in Trump’s favor. My only fear is that the left will go crazy and burn down the country. And that a final determination that Trump has won will lead to another four years of endless attacks against him and anything positive he attempts.

Hanging on to hope that the fraud will be resolved AND the truth will be undeniably in Trump’s favor. My only fear is that the left will go crazy and burn down the country. And that a final determination that Trump has won will lead to another four years of endless attacks against him and anything positive he attempts.

Damn, DB, ya done it again. Brought me outta my doldrums re: the faux election results. To be fair, I wasn’t very far down in ’em. Just studying on the various actions by the commie election offals told me the results were not what they seemed to be. Very heartening to see what the results actually seem to be. Makes more sense than what the MSM, et al are pushing.
Wouldn’t surprise me at all if when all is said and done, that the Senator races were adjusted to show clear winners in the R side of things. Along with clear R winners in some House races which had been announced for the commies.
Just hope DJT keeps the lawsuits going to drive more nails into the D coffin. Bury ’em deep.
MAGA.

Thank God we have President Trump and not some week kneed POS like Romney, Bush and others. I cancelled my cable so goodbye FOX and I have e-mailed most of the GOP Senators telling them that if they do not stand with President Trump. I will never vote for another Republican again, why bother?

Yes, we do. I woke up today reading this article and another from American Thinker and I feel so much better. Thank you.

I’m so glad we have a real fighter, a real leader as president. Any other “Republican” politician would have packed it in halfway through his term if they faced half of the crap President Trump faced, and, apart from getting us into never-ending loser wars, accomplished nothing good for America.

What a massive disappointment the whole Bush family has been. He and his daddy should go down as the fifth (after Carter) and seventh (after Clinton) worst presidents in our history.