How damaging was Joe Biden’s statement that he would destroy the U.S. oil and gas industry in last night’s debate? So damaging that at least one Democrat congressional candidate in New Mexico was disavowing him and her Party in real time:

I will continue to stand up to my party when they're out of touch with the reality on the ground in #NM02. 2/2

Biden’s latest promise to destroy an industry that provides more than 2 million direct jobs and supports another 8-9 million nationally will have major ramifications down the ballot in close races, not just in New Mexico, but also in Texas, Oklahoma, Kansas, Wyoming, Colorado, Utah, California, Alaska and the crucial swing states of Ohio, Michigan and most of all, Pennsylvania, the hub of the giant Marcellus Shale natural gas resource.

The irony is that Biden’s promise to “transition away from the oil industry, yes” came mere moments after he had outright lied to his national TV audience, claiming that he had “never” promised to ban hydraulic fracturing, a lie that Trump pretty much immediately disproved by tweeting out the same video he showed at this week’s big rally in Eerie, PA. That video shows both Biden and Kamala Harris promising to eliminate fracking on at least a dozen different occasions:

Joe Biden can’t win this election without carrying Pennsylvania. He has no road to the White House without it going through the Keystone State. By promising one more time to eliminate the oil industry, the Democrats’ Unfrozen Caveman Nominee essentially told PA’s tens of thousands of workers who rely on the industry to support their families  that they need to “learn to code,” to quote Barack Obama’s infamous advice to coal workers.

In 2016, Donald Trump basically secured the election with a win over the Pantsuit Princess in their final debate. Last night, I believe he essentially did the same thing with a clear dominance of Biden, who became increasingly confused and fatigued as the debate progressed and even made the George HW Bush mistake of getting caught looking longingly at his watch about 2/3rds of the way through. 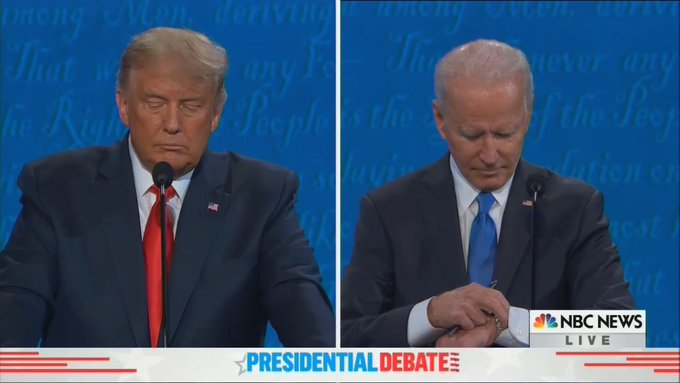 Despite the incessant interruptions and typically slanted “questions” coming from hack moderator Kristen Welker, Trump also got in the two most memorable zingers of the evening.

At one point, when Biden said “I don’t know where he comes from…”, Trump interrupted by quickly saying, “Queens.” Hilarious.

Then, when Biden rolled out the despicable Democrat lie that the border facility holding cages were an invention of the Trump Administration, the President responded with “Who built those cages, Joe?”

Then there was this exchange:

President Trump:  “He thought I shouldn’t close the border to China.”

Moderator to Biden: “Do you want to respond to that?”

China Joe’s campaign staff must’ve screamed in unison at that one.

The whole night went that way, with Biden stammering through obviously-scripted non-answers and the President directly taking the issues head-on, displaying the genuineness that got him elected in the first place in 2016. Biden “won” in the snap polls that several outlets put out immediately following the debates, but that has always been the case with Trump’s debates. What matters is what people will remember from the debate over the next several days.

After the first debate, all anyone remembered was Chris Wallace’s horrific moderation and the President’s anger, and it damaged Trump. It was in fact the only presidential debate Trump ever lost.

From this debate, people are going to remember the visual of Biden looking at his watch, Biden being confused and artificial, Biden’s negativity and Trump’s zingers and positive outlook.

That positive outlook, Trump’s obvious love of this country and everyone and every business in it, will end up being the overriding key. Biden lost this debate – and in my opinion, the election – when he said at one point that “we are about to go into dark winter.”

Trump’s response? “I don’t think we’re going to have a dark winter at all.”

So, that’s it; that’s the choice America now sees before it: A “dark winter” with a clearly-addled, mean-spirited old career politician who has been on the take for decades, or a bright future with the guy who created the greatest economy we had ever seen before China sent its viral plague to our shores.

As one anti-Trump network correspondent was overheard saying to colleagues in the press room before the debate: “It’s going to be a long 2nd term.”

For the corrupt news media, it sure will be. For America, happy days are here again.

15 thoughts on “Trump Won the Final Debate; Now, He Must Win the Election”