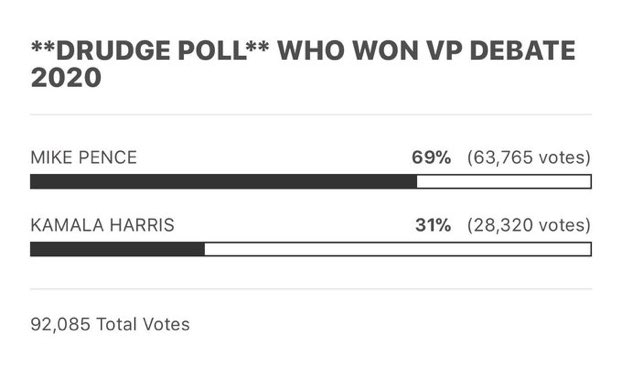 A similar poll conducted by the Spanish language station Telemundo arrived at an even more-lopsided 76-23 edge for the VEEP:

Thus, because of this very fact that Pence scored a lopsided shellacking of his sneering Valley Girl opponent, the New York Times, CNN and all the other corrupt news outlets are focusing their post-debate coverage this morning on two brief outtakes:

That’s it. That is all you are going to see and hear talked about related to this debate in the corrupt mainstream news media today. Had their girl had a good night, we’d be hearing about all the debate points she scored. Trouble is, she didn’t score any points.

Thus, flies and feigned indignation it is.

Remember, though, that Kamala Harris is the Democrat Party’s de facto presidential candidate. – No one, not even in the Democrat Party’s leadership, expects Joe Biden to remain in office for long should he win this election. Harris was the Obama faction’s favored candidate going into this election cycle, and she was hand-chosen to become Biden’s successor-in-waiting for that very reason after her own campaign for the party’s nomination crashed and burned.

If you’ve been wondering why last night was basically the first thing you have seen from Harris during the general election campaign, there’s a good reason for that. Everyone in the Democrat Party understands that she is an awful candidate who turns off everyone with whom she comes into contact. The reactions by viewers to what they saw last night as measured by those two snap polls did not surprise anyone, which is why corrupt news outlets like CNN and the Times were so prepared to leap into the lurch and try to defend her and push the DNC’s preferred narrative.

With nothing real and positive to point to in terms of Harris’s performance, they rely on these silly deflections instead.

On the whole “I’m speaking, Mr. Vice President” thing… – Why is it that feminists are all about strong women being able to stand and compete on exactly the same platform and rules as any man, until there’s a debate, when they pretend that any effort by the man to engage in some real back-and-forth with the woman is somehow “mansplaining” or bullying?

This is an incredibly sexist allegation, not towards Pence, but towards Harris, because the pretense is that, because she’s a woman, she is immune from being questioned during a debate by her opponent. Pence was simply attempting to engage with Harris as he would try to engage with a male opponent, which was exactly what leftist “feminism” pretends to be all about.

But when politics come into play, it is not about that, not at all, not even a little bit.

What made last night’s episode even worse is that Harris, being fully aware of the double-standard her media pals would impose on Pence, chose to play into it by pretending to be offended by his non-interruption. If anything, she may be an even more off-putting candidate than Hillary Clinton was, which again explains why the DNC and Biden campaign have striven so hard to keep her under wraps.

A virtual debate? Isn’t that what they all are? – News broke last night that the next presidential debate will be one of the “virtual” variety, causing the initial question of “so, what will be different?” I mean, we haven’t had a real debate between presidential candidates in this country since 1860.

The difference with this next one will, of course, be technological: Due to the President’s positive test for the China Virus, the Biden camp has insisted that it be held via Zoom or some such platform. From a story at the Washington Examiner:

“The second presidential debate will take the form of a town meeting, in which the candidates would participate from separate remote locations,” the Commission on Presidential Debates said in a statement Thursday morning about the Oct. 15 event.

The change in format, made “in order to protect the health and safety of all involved with the second presidential debate,” follows the president testing positive for the coronavirus last week just two days after he debated the Democratic presidential nominee, potentially exposing Biden to the virus.

“The town meeting participants and the moderator, Steve Scully, Senior Executive Producer & Political Editor, C-SPAN Networks, will be located at the Adrienne Arsht Center for the Performing Arts of Miami-Dade County in Miami, Florida. The White House Pool will provide coverage of the second presidential debate,” the commission said.

Earlier this week, Biden said that the debate should not be held if Trump still has the virus.

“I heard that the commission a while ago changed debate style, and that is not acceptable to us,” Trump said. He added, “I’m not going to do a virtual debate.”

Bartiromo then followed up to make sure she had heard correctly:

“I’m not going to waste my time on a virtual debate,” Trump responded. “That’s not what debating is all about. You sit behind a computer and do a debate. It’s ridiculous.”

Hey, maybe the Commission on Presidential Debates – which needs to be completely blown into a million pieces and scattered to the winds – ought to check with both campaigns before issuing statements about format changes.

Today’s news moves at a faster pace than ever. Whatfinger.com is the only real conservative alternative to Drudge, and deserves to become everyone’s go-to source for keeping up with all the latest events in real time.
0 0 vote
Article Rating
19 Comments
Newest
Oldest Most Voted
Inline Feedbacks
View all comments

Good for Btfsplk getting the CPUS(A) endorsement. All should remember that one should be judged by who their friends are just as much as who are their enemies.

For what it’s worth, Joe receives another coveted endorsement, from CPUSA. The organization that sounds like it smells, PU.

Knowing full well that President Trump would refuse a virtual ‘debate’, the commission set this narrative up to scuttle any future debates so as to blame Trump for the debates not happening which protect the pu$$y btfsplk form having to appear for any more debates – the excuse will be to protect btfsplk from getting CV-19; the purpose will be to allow him to avoid live debates and gaffes.

The Left probably infected Trump (attempted assassination perhaps?) so as to try to further cripple his presidency and campaign, and to get him to call off the rest of the debates. The Left also seems aware they can’t get another hack like Wallass to fall on his/her sword and lose all credibility, so let’s find a way to get Trump to bow out and them then blame him for the debates not happening.

I put nothing past these despicable people.

They couldn’t come up with a good excuse for the first one. After the President smacked both slojo and chrissy around the powers behind slojo were desperate for an out, Covid gave it to them.

And I still say the President and all the rest were intentionally exposed.

Camel-toe Harris has one look, and one only: contempt. It’s on display all the time. Hillary Rotten had the same look, and still does.

Social scientists and marital counsellors know that contempt in a relationship is the death of the relationship; a man or woman who shows contempt for their spouse is something that can not be overcome with counselling or patience. Contempt is the most telling harbinger to divorce.

When I dated, the first sign of contempt was the end – no delay, the end – of the relationship. Cameltoe Harris has shown that look at almost every opportunity, and she continued to do so to Vice President Pence.

The American People, men and women, have already divorced her. One woman told me: “she’s just a bitch!” Men have been more guarded in their critique, but no one wants her to be anywhere near the Presidency.

Contempt is not a good look in a leader. Not to mention the threats she’s made against all Trump supporters, should she win.

When the wicked cometh, then cometh also contempt, and with ignominy reproach. Proverbs 18:3

“And once he’s gone and we have regained our rightful place in the White House, look out if you supported him and endorsed his actions, because we’ll be coming for you next. You will feel the vengeance of a nation. No stone will be left unturned as we seek you out in every corner of this great nation. For it is you who have betrayed us.”

Vengeful, full of contempt. In other words, a bitch.

Wow Jimmy, I have not heard her say this, and I admit, I have not followed her ‘campaign’.

Where and when did she say this?

And yet, mind you, Trump is the one always being accued of being a Hitler.

I did a search and all the “fact checkers” say that she never said this. It would be nice to prove that she did.

Truth is often said in jest

She may not have said it but she damn well Skippy was thinking it. I’m no mind reader, but she’s a frigging marxist.
It’s what they do.

Yeah, I got that wrong. My apologies.

There is a danger for Taiwan, because China wants to deflect from its own fiscal incompetence:

I wonder how Mini Mike’s feeling these days, knowing that his investments are about to implode? Not to mention potentially facing felony charges (paying people to vote.) Soon to be millionaire-Mike, perhaps?

The real danger is that the CCP/PLA will initiate a war in order to placate an increasingly angry citizenry, who will face serious consequences from a morally retarded investor class. The world is preparing for this eventuality – (or should I say “inevitability?”) A wounded tiger is most dangerous – (even if it is, as one Indian Youtube channel calls it, a “paper tiger.”)

When paper tigers set themselves on fire, best not to be too close to the flames; We’re already seeing Turkey’s “Gollum” escalate a war, Islam vs. Christian nations, and he would like nothing better than to hold another Armenian genocide.. Some serious shit is about to happen, and serious choices have to be made.

Question: where is YOUR money, and where are YOUR retirement funds? President Trump knows this, and is working to disentangle pension funds – particularly municipal pension funds – from China’s collapsing system.

And will we continue to hold on to the fiction that Turkey is a reliable NATO ally? They’re nuggin futs. Plain as day. Nuggin futs.

Wow, 70-30% pro-Pence, very noteworthy. And the President would be fever-symptom free for 2 weeks, that is when the CDC says you’re clean to return to work. What is the issue? They are just afraid he might display more of the defiant leadership we saw on the balcony. Great link below that brought a tear to my eye. Very powerful essay.

“Trump was intrepid, not foolhardy, in his declaration and in stripping off his mask. His was an act of defiance in the teeth of a formidable array of enemies… a challenge to the groupthink that promotes anxiety. A critical aspect of leadership is daring defiance, when necessary.”

Having a “virtual” debate is like SenileGropeyJoe having to settle for a blow-up doll to fondle, instead of the real girls (and other men’s wives.) Only the real thing will do!

See, Gropey hasn’t given up, just wants to delay it a bit – maybe for after he leaves the Whitehouse, four years from now:

Until then, I guess a virtual girl is all Gropey Joe will be able to fondle. (Better check to see if he’s ordered Cheese Pizza, maybe?)

Proof that Pence is living in Cameltoe’s head – not only rent-free, but she’s paying HIM rent: when she anticipated an interruption that never came.

Pence is not a streetfighter, but he handles a foil pretty dang well! She just been poked! Over and over and over. (And not like she’s used to.)