For those who follow polls… – The new ABC/WaPo poll of Florida and Arizona has President Trump leading in both states and Martha McSally essentially even with Democrat Mark Kelly in the senate race there: 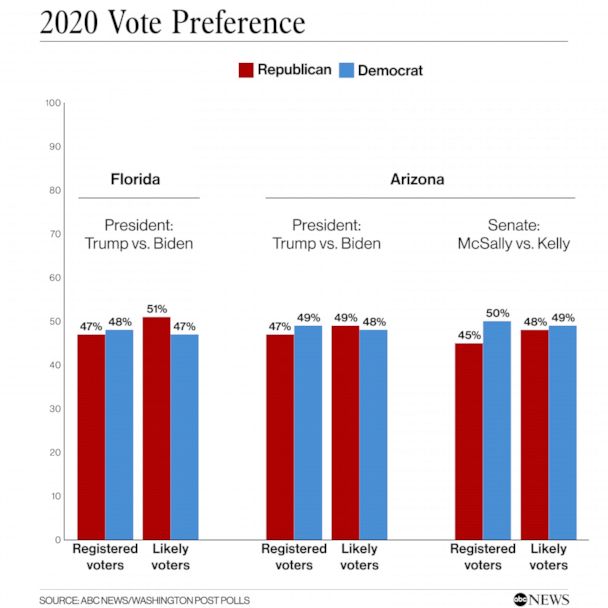 This poll continues to significantly over-sample Democrats. This is also the poll, remember, that had Hillary Clinton 13 points up just 3 weeks ahead of Election Day, 2016.

That reality, combined with Trump’s voter enthusiasm edge and the fact that the GOP has rung up big voter registration margins in both of those states since 2016 likely means that the President is well ahead in both states. And that doesn’t even account for the “shy” Trump voter phenomenon, which I am convinced is a significantly larger factor than any of the pundits believe in this election.

Think about it: If you are a Trump supporter, would you provide honest answers to a pollster who called you out of the blue some night? Do you know a single other Trump supporter who would? Yeah, neither do I.

The current Democrat hypocrisy over “norms” in 100 words or less:

Trump: “I’m going to nominate a replacement for Ruth Bader Ginsburg as I’m required to do under the Constitution.”

Democrats: “Trump is destroying our norms and traditions!!!!!!!”

Speaking of Democrat hypocrisy… – Alyssa Milano is an emotionally unstable nitwit d-list actress who spends most of her time these days screeching on her Twitter account and pretending to be an “activist” on any faddish leftist cause that comes down the pike. The leftist fad that came down the pike this summer, of course, was the Democrat movement to “defund the police,” a movement that most Democrat politicians are now running away from like a hot potato because of horrific polling numbers.

But not poor Alyssa, who is notoriously slow to learn, so she’s still hot on the “defund the police case.”

So, what did she and her cowardly husband do when they heard some popping noises that they thought were coming out of their backyard? Did her hubby grab a baseball bat and bravely venture out into the yard to see what all the racket was about? No. Did Alyssa herself grab the pepper spray she keeps handy in case she crosses paths with someone wearing a “MAGA” cap? No. Did the terminally dim couple even bother to look out the window to see if they could spot some mad man with a gun? No.

Instead, this pair of crusading leftwing police defunders did what most other Americans do whenever they believe they are under attack: They called the police, of course, and all manner of hysteria and hilarity occurred.

From a report at the Daily Mail:

EXCLUSIVE: ‘Defund the police’ activist Alyssa Milano calls 911 sparking massive police presence in her quiet California neighborhood claiming an armed an gunman was on her property – but it was really a teen shooting at squirrels with an air gun

By JILL ISHKANIAN FOR DAILYMAIL.COM 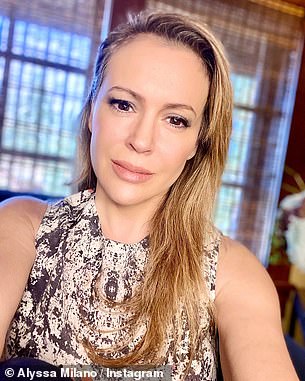 The 47-year-old lives in an 8,000 square foot, $2.5 million home in the upscale gated community that sits just 20 minutes north of Los Angeles

Actress and ‘Defund the police’ activist Alyssa Milano was quick to call cops when she believed an armed gunman was on her Bell Canyon property on Sunday morning.

The call ignited a response that included seven Ventura County Sheriffs’ vehicles, one K-9 unit, a police helicopter and one Los Angeles Fire Department team that sat down the street on standby.

DailyMail.com has obtained exclusive photos showing the first responders coming to the aid of the 47-year-old at her five bed, six bath, 8,000 square foot, $2.5 million home in the upscale gated community that sits just 20 minutes north of Los Angeles.

A neighbor tells DailyMail.com, ‘We first noticed the helicopter circling overhead very low and knew something was going on, it’s usually such a quiet community. Then we saw all the police cars parked in front of Alyssa’s home. They had their guns at the ready and seemed very serious.’ 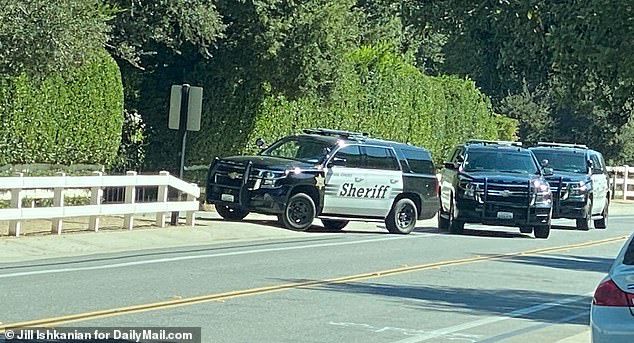 In all, at least 7 Ventura County Sheriff’s cars arrived at the scene, only to discover that the “mad man with a gun” was in fact a kid with an air gun who was trying to shoot a squirrel.

You could never, never, ever make this stuff up.

Meanwhile, in Riot City, USA… – The hijinks got real in Portland last night, as the local cops interrupted a really bad rapper who was disrupting yet another of the city’s residential neighborhoods:

Portland tonight: BLM protest rapper, Sean Lopez, was doing an impromptu concert when cops rushed in and made an arrest. #PortlandRiots #antifa pic.twitter.com/2xR5IaJZ8J

Stopping that rapper was a real community service right there.

Portland tonight: #Antifa rioters dance in a mosh pit in the middle of Burnside street in front of the Penumbra Kelly police building. Last night they shut down the same street as well. #PortlandRiots pic.twitter.com/2HzF5QnOFA

At another point, police hamstrung by the city’s corrupt Communist Democrat Mayor, Ted Wheeler, were forced to back away by a bunch of pasty-faced, chubby, white Gen-Zers who live in their grandmother’s basements:

Oh, hey, the rioters are armed with mortars now – did the Democrats in congress do a budget appropriation for that?:

On and on it goes. What a country we have  become.

Have they charged the kid with the BB gun with a hate-crime yet? (A. Milano will be filing charges, for sure.)

On that note: I don’t hate squirrels, but prepared properly, they sure are tasty!

Good for her and her soyboy. This cretin deserves to be frightened more often, it will keep her from lying on MSM broadcasts. I swear the IQ of these Libs can’t be above 65.

Thank God these idiots reside far away from where I live. There’s always somebody killing a Copperhead or a unwelcome chicken house raider here. A shotgun going off at 2 or 3am doesn’t even wake me up. Of course my nearest armed neighbor is about a half mile down the road. I don’t have an 8k sqft. mansion, but I do have 20 acres.

That’s the problem with most city folks. While I wasn’t raised in the country, I was raised around firearms, hunting and fishing. We camped a lot when I was a kid. We didn’t even have a trailer until my youngest brother was around 5. We were taught to respect the land and it’s inhabitants.

I was continuously amazed at how many of my schoolmates didn’t know how to shoot or fish.

Dear Lord above, stop this continuous liberal nonsense. Please also while you are looking at the issue, give the police and National Guard leave to clear the streets in Portland and Seattle and anywhere else and keep them clean and free of rioters. Protesters are welcome, rioters need to be jailed. If you can’t admit the difference, you are a liberal. I hope you are soon irrelevant to the American way of life. Go to Europe where your kind of marxist, violent behavior is more accepted. Here in the US of A, We don’t go for that nonense. We don’t really want to wipe you out in the civil war you seem to be fomenting, so please just leave. Go where your kind will be free to push anarchy at every turn. Somewhere in South America would work.

They did promise to leave in droves if Trump got elected. Oh yeh, forgot they’re all liars.

Terminally Dim is a perfect descriptor for Alyssa Milano. Clueless to the end.

Another home run from American Thinker today, this one gave me 3 covfefes out the nose. Poor Quid Pro Joe.

Speaking of voters in Florida, Bloomberg may soon be a felon for bribing felons by paying off their fines. It is against the law to exchange something of value for votes. Hmmmmm

I was waiting for some of the Libs (who promised a BJ for any man who would vote for HRC) to be charged, but it was decided that a bribe had to consist of something of value.

Threats have a way of turning people away.

Wow, this post by Dave really demonstrates the utter hypocrisy of the left. I Bing-ed the word hypocrisy, looking for a clever angle for a reply, and look what popped up, a list of videos, all calling the GOP response to RGB utter hypocrisy. All the little talking heads calling us hypocrites, when they are the real ones.

Milano doubtless would want the squirrel-shooting kid (Hope you got the critter, dude! Good with squirrel gravy!) to serve years or decades in jail for terrorizing her and her soy-fed husband. How does a pellet gun sound like a real gun? Only in the mind of the paranoid schizophrenic. She is clearly insane.