What madness is this? – The Unfrozen Caveman Nominee of the Vote-By-Mail Party cast  his vote in his home state’s primary elections Monday morning, and did it live and in person. Or at least as live as in-person as Joe Biden gets.

Hilariously, Creepy Uncle McWifeMolester demonstrated he has no idea where he will be tomorrow as he was exiting his live-and-in-person voting location:

Wouldn’t it have been great if one of the assembled reporters had had the integrity to ask Biden if he could name the person for whom he had just voted? Or ask him if he has figured out how many grandchildren he actually has (he has 7 but recently told reporters he has 5), and if he could recite even 3 of their names?

You might think such questions would be insulting but this man wants to become president of the United States, and there is every reason to believe he would not be able to accurately answer them. He has in fact already answered at least one of them incorrectly at a public event. What happens to the rest of us when he mistakes his Oval Office desk chair for the toilet and tries to use the nuclear launch button to flush it?

Will Joe Rogan save the country from the Biden menace? – Comedian/podcaster/WWF announcer Joe Rogan this morning invited President Trump and Gropey McNastyFinger to host a presidential debate during one of his upcoming 4-hour-long podcasts.

President Trump immediately leapt at the opportunity, using his Twitter feed with 100 million followers to accept the challenge:

Does anyone believe the Biden campaign will allow their captive candidate to do the same? Please.

Once it becomes clear that Biden’s elder-abusing wife and handlers will not – cannot – allow this to happen, the Trump campaign should volunteer the President to do a stand-alone, 4-hour Q and A with Rogan. With Biden almost certain to concoct some excuse for backing out of the 3 scheduled televised debates as well, this would provide the President with a prime opportunity to reach Rogan’s enormous audience – made up mainly of people Millennial-age and younger – without a hostile media filter. It could literally change hundreds of thousands of minds.

The Trump Campaign must seize the day on this.

Meanwhile, Biden’s handlers let him out of the basement for the first time in three days, and here is what he is doing this afternoon: 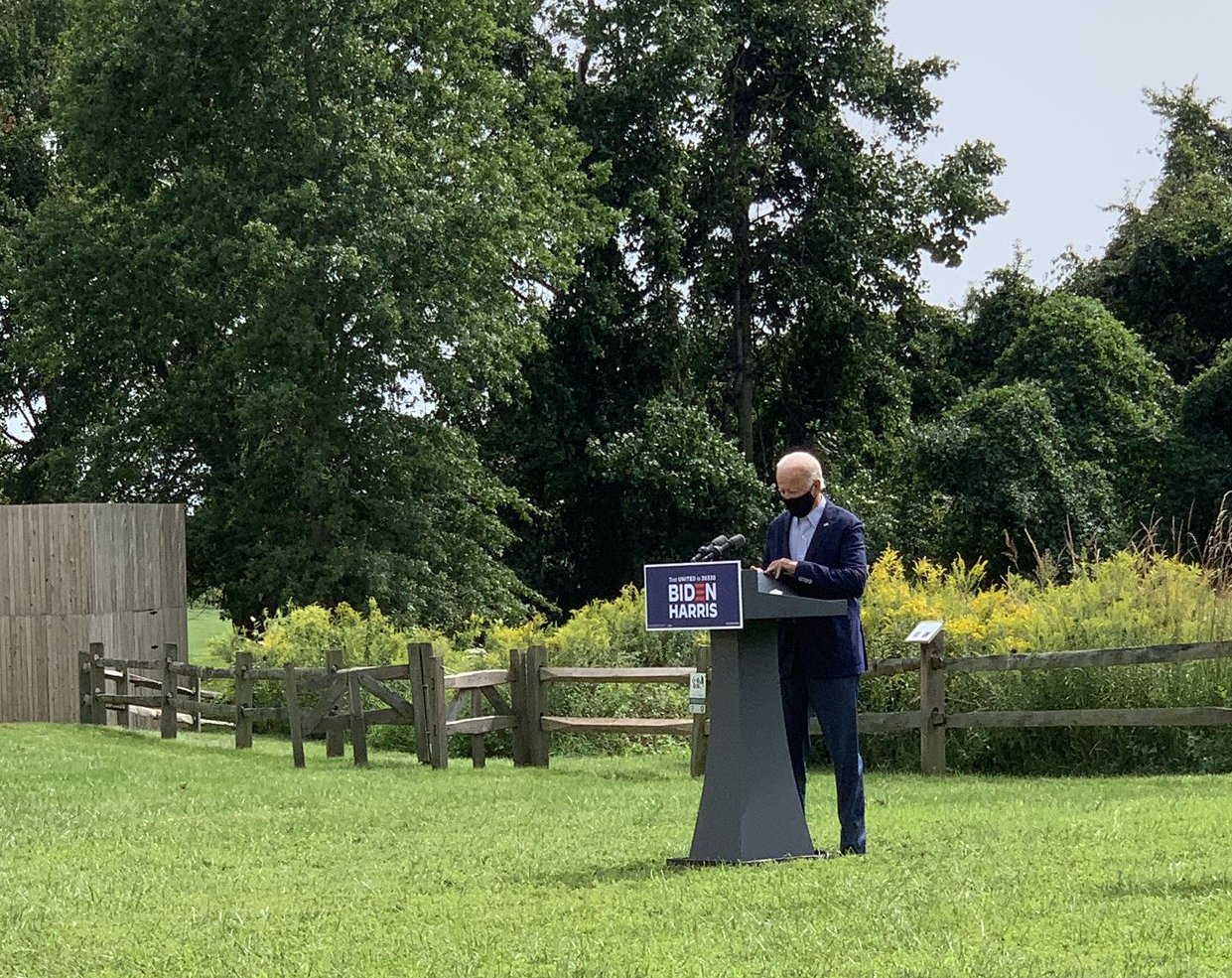 Standing all alone at a podium at the edge of a wheatfield, reciting the standard leftist demagoguery about “climate change” causing the Western wild fires, and refusing yet again to take any press questions because he is incapable of doing so without a TelePromper handy.

Umm… Joe Biden just touted the actions of "the Obama-Biden Administration" and said "this is just the beginning if we get re-elected." pic.twitter.com/v5h002ZuzT

The man’s a menace, and must be defeated.

Biteme the grope Joe will not debate Trump you can bet your sweet bippy on that.Can you imagine how bad Trump would make the old fool look ?na aint gonna happen I still would not be a whole lot surprised if the great grouper Joe will not come up with health reasons or some lame excuse and drop completely out leaving Ma Harris holding the bag in more ways than one.Whata ya think?

When I first saw your headline, I thought Biden was doing early voting for president and wondered if he remembered to vote for himself or if he voted for Trump. I didn’t realize Delaware and New Hampshire (apparently) was still holding primaries. I thought all this, you know the voting thing was done by now.

Since this is obviously for a race that is probably a fait accompli why bother with a meaningless photo op? Why not reinforce the idea of mail in voting by having him lick a stamp and give it to John Kasich, Cliff Clavin or Newman?

Can’t wait to reelect Obama-Biden. NOT!

And two appearances sans neck tie – was his neck tie tier sick and not available?

Rogan endorsed Bernie Sanders…how fair can he be?

He also stated recently Biden is like going on a long hike into the forest with a flashlight thats battery is nearly dead. It isn’t going to end well…

Rogans got some weird ideas, don’t we all, but from what I’ve seen he’s far more thinking than the regular demoncrap voter. Even if he was obviously bias’d in an interview Trump would point it out quickly. He ain’t shy about that at all.

Answering tough questions is what the job entails and Trump goes in swinging. Joe does the you know, you know… the thing right. It’d be a great avenue to reach a LOT of ‘moderate’ dem voters.

Joe has secretly invented a time machine in his basement. We all get to go back to 2008 if he wins.

In his mind, he’s already there:

Did he ever really leave?

Yep….the way she hovers over old Joe is scary. It’s plain to see she wants desperately to be first lady

Trump knows how valuable the Rogan play would be–his response was almost instantaneous.