A very interesting piece at Axios today by writer Bethany Allen Ebrahimian, detailing how how Hollywood, in its zeal to appeal to the Chinese market since 2012, has systematically discriminated against Black and other dark-skinned actors in favor of those with fairer skin:

An academic study has found that since 2012, when China began allowing more foreign films into the country, Hollywood movies have cast more light-skinned actors in starring roles.https://t.co/C7nY6yacNf

Note that she says that an academic study “has found” that what its authors call “colorism” has been taking place since China’s communist government began allowing more U.S. films to come into its gigantic market. Note what she doesn’t say in this tweet: That this study was published way back in 2017.

Here’s an excerpt from her piece at Axios:

Details: The study, published in October 2017, examined more than 3,000 films from between 2009 and 2015 and found that films made after 2012 demonstrated an 8% increase in the number of “very light-skinned” actors in starring roles.

The light-skin shift only occurred in film genres that the Chinese government typically permits into the Chinese market, such as action movies and big summer blockbusters. U.S. studios increasingly create these films from start to finish with the Chinese market in mind.

Got all of that? Here are several really damning conclusions to be drawn from this:

Think about it: This study has been out in the public domain for three long years now. Have you seen anyone from BLM condemning Hollywood as a result? Have you seen a single Democrat speaking out against this rank racism being employed by their Hollywood benefactors?

Even more to the point given the events of this past summer: Why haven’t the Marxist leaders of BLM gone to Hollywood to stage a riot over this? We all know the answer, don’t we?

Here is a graphic illustration of how this Hollywood racism works: 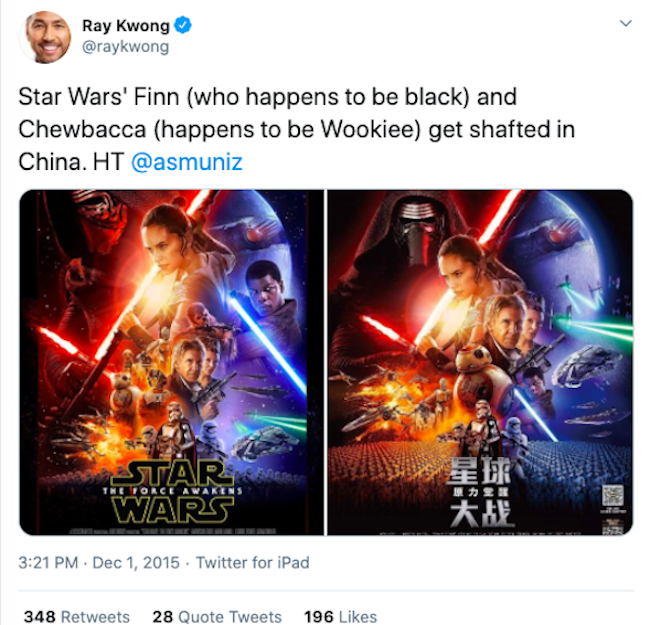 Note how the Black actor and even the dark-skinned Chewbacca are either minimized or disappeared altogether from the poster used in China.

In this excerpt, the author of the 2017 study, Manuel Hermosilla, performs some mental gymnastics to try to distinguish this practice that he calls “colorism” from the rank, smelly racism it truly is:

While it’s tempting to place the light-skin shift within the context of racism in Hollywood, Hermosilla warned against that.

Look at that poster again and tell me what the practical effect of “colorism” actually is. Again, the Black actor is singled out for minimization, and the dark-skinned Wookie is eliminated altogether. No doubt Disney would have re-cast the role played by the Black actor altogether for a separate Chinese version of the film if the studio honchos thought they could get away with it.

That isn’t racism? My goodness.

Hollywood always has been and remains a blatantly racist community, and nobody at Black Lives Matter or in the Democrat Party cares.

[…] Hollywood, in its zeal to appeal to the Chinese market since 2012, has systematically discriminated … […]

I remember during the late eighties there was a lot of Japan bashing because it seemed the Japanese were buying up America – Hawaii and California in particular.

I seem to remember hearing relatively recently where China was buying up huge controlling interests in Hollywood, so it is no surprise they are looking to control the content and tailor it to their desires. However, I am a little surprised there are that many movie goers paying all that much money for entertainment in China when most of the country is working for slave wages and is dirt poor. Maybe 10% of their population (which is still close to half of our population) can afford the indulgences that 90% of Americans can afford, but I guess that audience has sway with Xi over there. Maybe some Chinese are catching up to the average American’s disposable income, but I have to believe the average American is still light years ahead of the average Chinese citizen. Maybe that will change if another Democrat gets elected and taxes us into poverty and Hollywood and the NBA etc. are hedging their bets.

I hope soon the US audience will start to exert real pressure to rein in Hollywood’s overwhelming leftist message. I can’t wait until our film companies and sport owners (and Colleges and universities) start seeing a loss of 50% of their profits and their ‘stars’ see a corresponding loss in their individual paychecks. Maybe that might change the ‘message’.

Gregg – I’m in the biz & trying to do my part; have a historical documentary series making the rounds right now. On the actor side (SAG member) I recently sent an article from the Daily Mail to my Manager in NYC saying that white men were “dead to the industry” & asking if we should be concerned about it. She’s a big democrat & said no – just keep pushing forward.

Think there’s an opportunity here; Hollywood has effectively been trashing half the country for over 20+yrs & that half of the country has tuned out/off their product. From a business standpoint it’s stupid BC $$ are universally green, not red or blue. I have some independent feature film projects in the works as well & I can tell you – from experience- that conservatives do not support their own when it comes to financial backing; the Left does that’s why they run Hollywood. Conservatives are cowards when it comes to Entertainment. I don’t understand it. It’s not a monolithic industry by any means; my Agent is/was/always will be a registered Republican. He’s also a member of the Burbank gaffers Union & told me – pre 2016 election- that all rank & file members were voting Trump, only the union bosses voted HRC. The far Left cranks though suck up all the O2 in the room, but I know plenty of actors on our side of the fence. We just can’t speak out BC if we do we get blacklisted.

There ain’t no “tolerance” & “diversity” practiced, trust me.

Joe McCarthy had it right.

Our household loves Turner Classic Movies. The only thing that Ted did right imho. He saved thousands films that otherwise would have been lost to time. I’m in my early ‘s but love all the movies I’ve ever seen there for the most part.

One my best experiences has been coming home from work late at night and seeing my sister in law and nieces (in their 20’s) watching TCM.

Hollywood is dead to me. Save for the movies that Turner saved, they can all burn.
The 80’s were the end of it. Most after that has been rehashed crap.

That day off has really energized you Dave. Four articles including the discussion forum with a lot of links from the gang. I don’t even have to go to Whatfinger.

You would think Labron and his ilk would recognize this real systemic racism, but I guess $$ blinds the uninformed. John Birch had a love for the Chinese people and hatred for the communists, but now he is demonized as well as the American conservatives who are sounding the alarm. Still thankful to be a US citizen. Thanks Dave for this forum.

I remember many years ago when the Chinese beat up visiting basketball players from Nigeria. Seems that racial jealousy was involved, because the Chinese women found the basketball players attractive. The Chinese – in general – have always been racist, even against the Vietnamese. Asians are not a monolith, all of one race you know.

Which makes it odd that the NBA would attach itself to such racists. The NBA players are sellouts of the worst sort.

Considering how China is setting debt traps for African countries, who are then forced to pay in raw materials when they can’t pay the interest, it’s hard to see why people of African descent anywhere would trust the Communist Chinese government. The government is full of racist bullies. African nations should just dump their obligations and seek favor from non-Communist nations (which would exclude the World Bank and others who similarly set debt traps for unwitting countries.

American actors, who once found it trendy to admire the Dali Lama, have suddenly grown quiet as the nation of Little Emperors grows spoiled and has Hollyweird on the same kind of chain as Hitler did vis a vis Jewish composers, actors and writers. Now the Chinese don’t want people of dark color to appear on their screens. They have shown how much they admire the Tibetans – not at all – and have demolished their national identity, supplanting it with their own.

The movie “The Island” is a dystopian movie about people being bred for organs – and the ultimate hero in the movie is a very dark actor – Djimon Hounsou – who plays a compelling role. Considering the topic is closely associated with organ harvesting, I would be surprised if the movie is even allowed in China.

May the dams break all at once.

‘Asians are not a monolith’

Very true. If you go to the Philippines, there is actually a lot of anti-Chinese sentiment that runs parallel to anti-Semitism in the West.

I always thought it was odd, since the Filipinos have much more recent bad history with Japan, Yet that seems largely forgotten, and the Chinese are targeted.

Add to that IMF for debt traps.

One of many reasons we don’t support or watch Hollywood garbage. Don’t buy, rent or give any sort of payment to any of these pukes. Why fund the enemy?!?!?

Besides… the older stuff is far better than any of the rot coming from freak city.

Its a war… stop giving the enemy your money

I hear ya, but man it’s tough. Sometimes I have to shut off the side of the brain that recognizes that the actor I’m watching is a complete tool off screen. ‘Cause I love movies. I draw the line at whether the movie or show I’m watching is preaching to me or not.

That story bookends with this one:

As someone observed, this is equivalent to filming on location in Dachau.