Tired of all this WINNING yet? – In case you missed it yesterday, the stock market rocketed skywards again on Wednesday amid ongoing positive economic news.

Tired of all this WINNING? Not even close. We need at least another 4 years.

Facebook joins the Democrat/media effort to brainwash you into accepting a stolen election. – Facebook announced this morning that it is enacting two new measures designed to condition you to think it is President Trump, and not the Democrats, who is plotting to steal the November election.

Facebook says it will refuse to run political ads the week prior to Election Day, and that it will create a “new label” for posts by candidates claiming victory before the official results have been certified.

The first measure is a direct attack on the Trump Campaign, given its huge edge in effective social media advertising. The second measure is Facebook’s effort to coordinate the Democrat strategy laid out earlier this week by the Democrat front group Hawfish, which I covered in a piece yesterday. Here’s an excerpt from that piece:

On Tuesday, Axios ran a story quoting a representative of the Bloomberg-funded Democrat firm called Hawkfish, laying out the scenario the Democrat/Media Axis of Propaganda is attempting to set up for the November Elections. The scenario envisions a socially explosive situation created by the Democrats. The first part of it involves President Trump holding a huge lead in both the popular vote and the Electoral College when we all trudge off to bed on Election Night. But that lead won’t hold as Democrat vote counters in Blue and Red states around the country “find” boxes and boxes filled with “mail-in ballots” that magically contain the number of votes Biden needs to overtake Trump’s Election Day lead.

Again, the media – including social media – is brainwashing you to be willing to accept a stolen election in the weeks following Election Day. They really aren’t even hiding it at this point.

Holy Crap Honey Badger is pissed off and is eating the old Wolf as a snack! Dammmmn! pic.twitter.com/bnr4mjeVJb

Speaking of CNN… – CNN was left out of the list of debate moderators that was released on Wednesday. This is the first time in this century that the fake news channel will not have one of its Democrat Party operatives trying to slant one of the debates. The reason for this is obvious: Even the Commission on Presidential Debates knows that CNN is no longer anything resembling a legitimate “news” operation.

But that knowledge by the Commission did not stop it from loading up its list of “moderator” with nothing but Trump haters. That list is led by this guy: 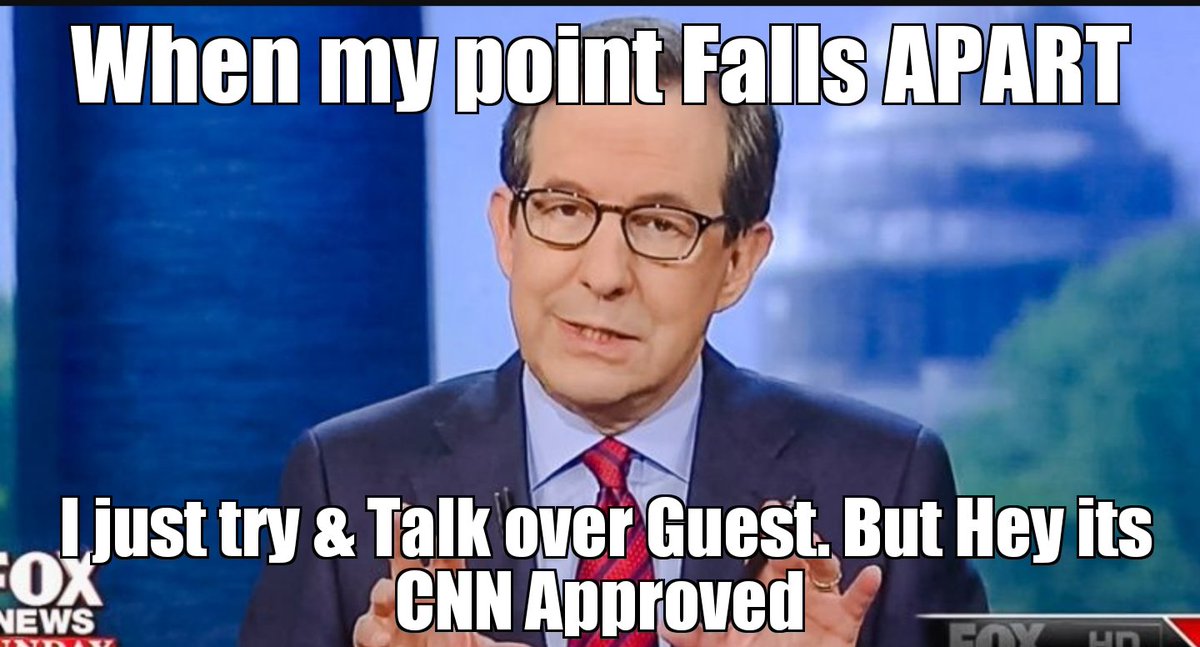 Yes, friends, Chris Wallace, the lisping son of famous communist Mike Wallace, and a man who would be far more at home sitting next to Wolf Blitzer on CNN, will serve as the “moderator” of the first presidential debate. Those screams of joy you heard yesterday when this was announced were emanating from Joe Biden’s basement.

This invariable stacking of the deck in favor of the Democrat candidate is why the debate “commission” should be disbanded, and future debates should simply be organized by the respective campaigns. If the campaigns can’t agree to a format and moderators, then you don’t have debates. Simple.

You would think these Democrat-sponsored domestic terrorists would be more grateful. – Ted Wheeler probably still doesn’t understand this immutable fact of leftist revolutions, but he and his fellow Useful Idiots in the Democrat Party will be the first to be executed should their dream of a Marxist revolution ever come to full fruition.

Wheeler has received a clear preview of that difficult reality this week, as the same domestic terrorists he and his Party have encouraged and funded for almost 100 days now invaded his pricey condominium complex beginning on Sunday, and have continued targeting it all week. At one point they even set fires that threatened to burn the place down.

Obviously, poor Commie Ted has now been beset with complaints from his fellow wealthy and privileged neighbors, who were likely just fine with the riots as long as they didn’t come to their own neighborhood. So, Commie Ted announced yesterday that he would be departing his lovely condo and moving to undisclosed, but no doubt equally splendid grounds:

Wheeler wrote a letter to his neighbors informing them that he was moving in order to avoid more violence from protesters at the condominium.

“I want to express my sincere apologies for the damage to our home and the fear that you are experiencing due to my position. It’s unfair to all of you who have no role in politics or in my administration,” read the letter according to The Oregonian, which obtained a screenshot of the message.

He went on to say that it would be best for him “and for everyone else’s safety and peace” to move from the condominium.

Aw, poor Commie Ted, a victim of the evil he helped to create.

Speaking of Portland, how about those riots! – The Democrat-sponsored riots raged in Portland for a 99th straight night.  Here are some highlights provided by real journalist Andy Ngo, including information on where the extremely wealthy Commie Mayor might be moving:

Portland Mayor ⁦@tedwheeler⁩, who owns multiple properties including an island house & beachfront home, plans to move out of his Portland condo to avoid the riots. #antifa #PortlandRiots https://t.co/klLipvlbx8

The DOJ has now cross-deputized local law enforcement so that assaults by rioters on them now become federal crimes. Thus, William Barr outsmarts local Soros-funded DA who refuses to prosecute them:

The significance of this charge is that rioters in Ore. can now be FEDERALLY charged for crimes against state officers. It was reported yesterday @ORStatePolice have been cross-deputized by the federal government. This bypasses @DAMikeSchmidt's catch & release policy. #antifa https://t.co/CXSVMM23py

Even the liberal courts in the 9th Circuit are turning against the Democrat terrorists:

A federal judge ruled that #antifa self-described “street medics” have no special rights and must disperse when ordered to by law enforcement. Four of them sued, claiming cops violated their special status. #PortlandRiots https://t.co/RcGnSVFSvU

The President signed a memo yesterday ordering his agencies to find ways to defund lawless Democrat-controlled cities like Portland:

"My administration will not allow Federal tax dollars to fund cities that allow themselves to deteriorate into lawless zones," said Trump in a memo.https://t.co/C2vRQFjQl6

Riot declared in Portland after fire started in apartment building https://t.co/BKsGg6A0co via @nypost

Finally, here is a witness to the murder of a Trump supporter by Democrat domestic terrorists in Portland last weekend:

PORTLAND: Aaron “Jay” Danielson was shot and killed for supporting Trump in Portland

Smells like a hit to keep Mr. Reinoehl from naming names.

“Never Trump” Wallace is going to moderate!? Might as well just let Stelter or Maddow do it.

The ideological origins of the modern Left:

So what’s going on in Canada?

At least she didn’t recommend using an oral dam.

Here is a thrilling example of how America takes care of her own. This is a story or our exceptionalism that the cancel culture is trying to erase forever. We cannot let that happen. I thank God every day that I am a citizen of this great country. Enjoy.

Gee, I wonder who will draw the bigger crowd?

There is one party of racists in this country, and it is the Democrat party:

Comrade Kommissar Wheeler has an Oregon beachfront home, a $1.3million dollar home in the West Hills and another home in the San Juan Islands.
The “civil servant” permanent bureaucrat gig pays well indeed.

That’s a long drive. It will give her family time to escape.

They should all give her a big group hug and tell her it’s all going to be ok because Orange Man actually doesn’t hate gays and give her a MAGA hat to take back home with her.

Narcissistic mush brained lefty loons are losing big time! She’s going back home for a vote blue intervention with her family because they’re going to vote for Trump.

The CPUSA has an army of lawyers and activist judges ready to go with lawfare.
Our external enemies are licking their chops and hoping that all goes well for their CPUSA comrades.
Esteemed party member comrade kommissar Wheeler doesn’t want to be around the lumpen proles?
He should invite them in to see his prized agitprop collection.
Forward! Yes we can…burn it all down.

The media couldn’t be bothered.

Wallace is the male version of Candy Crowley so CNN won’t object!

Wallace is an ersatz version of his father who, while a raging leftist, was actually good at his job.

Stu just said that Rove the rino says the mail in vote is going to cause chaos. No doubt.

Trump is going to roll the Rust Belt, powered by the black male vote:

Barr speaks some truth, and then takes pity on Wolf claiming CNN is fair and balanced:

For whatever reason, the Dow is down quite a bit–but then again, if I understood the market, I’d be rich.

Profit taking mainly. Not surprised. There are those that sell for whatever reason. If it had dropped a couple thousand I would be more concerned. It’s already going back up.

Every email I get from a candidate I’ve contributed to gets kicked to my spam folder. Even after I flag the first one as Not spam.

Is this typical behavior?

That phenomenon is known as the evil google ricko’shay.

Google is the absolute worse… You are actually helping them refine their algorithms when using any of Alphabets ‘services’ or products. Microcrap and Alphabet (Google) are probably the two most evil companies and people in the world.

Both of these companies developed and installed the Chinese massive surveillance and ‘social crediting’ systems employed in China. And… are incorporating it into western countries today, and now with Apples collaboration too. The beauty of big tech monopolies, they can do what they want and the government likes their products.

Chris Wallace at FOX, Rachael Madcow at PMSDNC, or Fredo at DNCNN, is there really any difference?

What? FOX couldn’t borrow MeAgain Kelly for a night of Moderator Madness?

Why couldn’t Tucker or Laura or Judge Jeanne have been the moderator? I leave out Hannity for the same reasons I would leave out Rush as their reputation and partisanship would be a little too over the top and give the left’s weenies a little too much ammo.

Many years ago, the NCIS show had an episode where a molded mask and nasal reconstruction allowed for a near perfect impersonation of another person.

It would not surprise me to see a Joe Biden suddenly begin to become a little more competent in the weeks ahead. Everyone seems to be pushing the idea that these debates are actually going to happen, so there must be a plan B. The way the media lies about everything, how far fetched would creating an actual fake Biden, since the real one is so fake already be?

Hollywood, the fakest of all industries is, after all, on their side.

If there are debates they’ll push for video debate. That way the demoncraps can use software to emulate a CGI sniffer joe probably cheaper too…