*sigh* Here we go again. – Some New York Times hack reporter named Michael Schmidt has a new book out, and it is going to serve as the germination for the latest Democrat/media hoax. This one will be called the “Did Trump Have a Stroke?” hoax.

In his book, Schmidt writes about the President’s “abrupt” trip to Walter Reed Hospital for what the White House described as a physical exam one Saturday last November. Relying on only unidentified sources, Schmidt claims that Vice President Mike Pence was notified to be ready to take over the responsibilities of the presidency by the Secret Service and goes on to allege the President had suffered a stroke.

From a piece at the utterly corrupt The Hill:

Schmidt wrote that he learned “in the hours leading up to Trump’s trip to the hospital, word went out in the West Wing for the vice president to be on standby to take over the powers of the presidency temporarily if Trump had to undergo a procedure that would have required him to be anesthetized.”

He did not specify his sourcing for the information about the November 2019 hospital visit.

At the time, the White House said the president underwent a “quick exam and labs” as part of his annual physical exam preparing for “a very busy 2020.”

The president tweeted after his visit that his health was “very good (great!)” and that he would finish the exam in 2020.

While Pence did not take over presidential powers, Schmidt’s book raises questions about the unscheduled hospital visit, which drew speculation at the time about the president’s health.

Scumbag media figures like former Clinton spokesman Joe Lockhart immediately started up the “Trump had a stroke” drumbeat on Twitter after CNN had aired a segment on the book:

Did @realDonaldTrump have a stroke which he is hiding from the American public?

Here’s the problem with this particular scam: If the President had a stroke, he had an amazingly rapid recovery from it, given that he actually took questions from reporters the very next day and showed no signs of any ill-effects. How many of you could suffer a stroke and then face the pack of braying hyenas in the White House press corps?

The whole point of this particular exercise is an effort by the Democrats and their media toadies to attempt to offset the growing public alarm about the frailty of Joe Biden by raising health concerns about the President. A clear majority of Americans now believe that Biden is suffering the effects of advancing dementia – which he obviously is – including over 30% of Democrats, so this is the corrupt news media doing anything it can to try to provide cover for that reality.

Yesterday’s little venture out of the basement by Creepy Uncle Quid Pro Dementia China Joe did not help matters in this regard, as I talked about yesterday evening. Biden looked halting and frail just walking a few steps from his limousine to his private jet (whose private jet is that, by the way?); he stammered his way through trying to read a prepared speech from a TelePrompter, and he yet again refused to take a single question from the fawning fake reporters who follow him around like a pack of newborn ducklings.

To make the media’s mendacity even more disgusting, here is how every major media outlet in America portrayed Biden’s speech photographically at the behest of his elder-abusing campaign handlers: 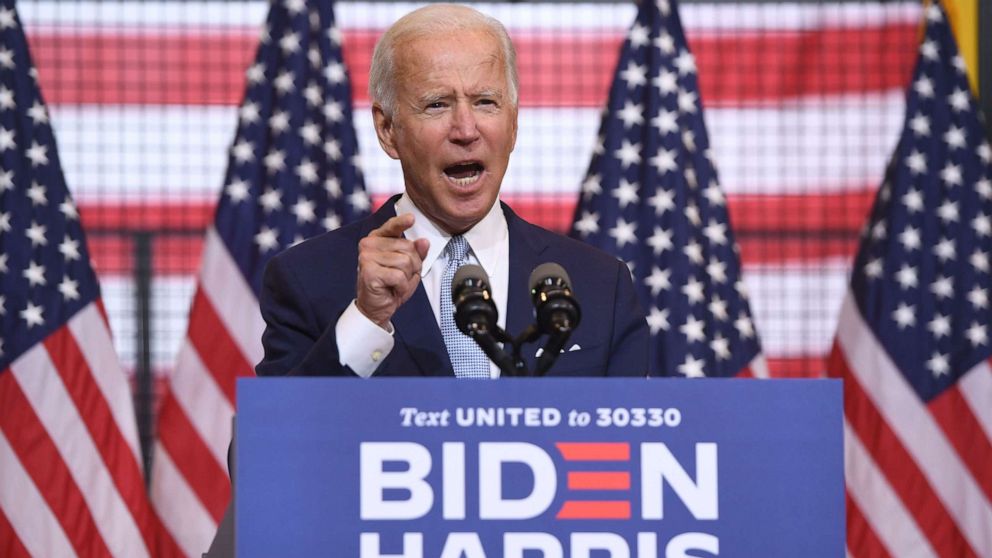 Nothing but close-up shots, flags waving in the background, formal campaign podium in the foreground, portraying the illusion that he was speaking to a large crowd.

Now, here is the reality of the setting: 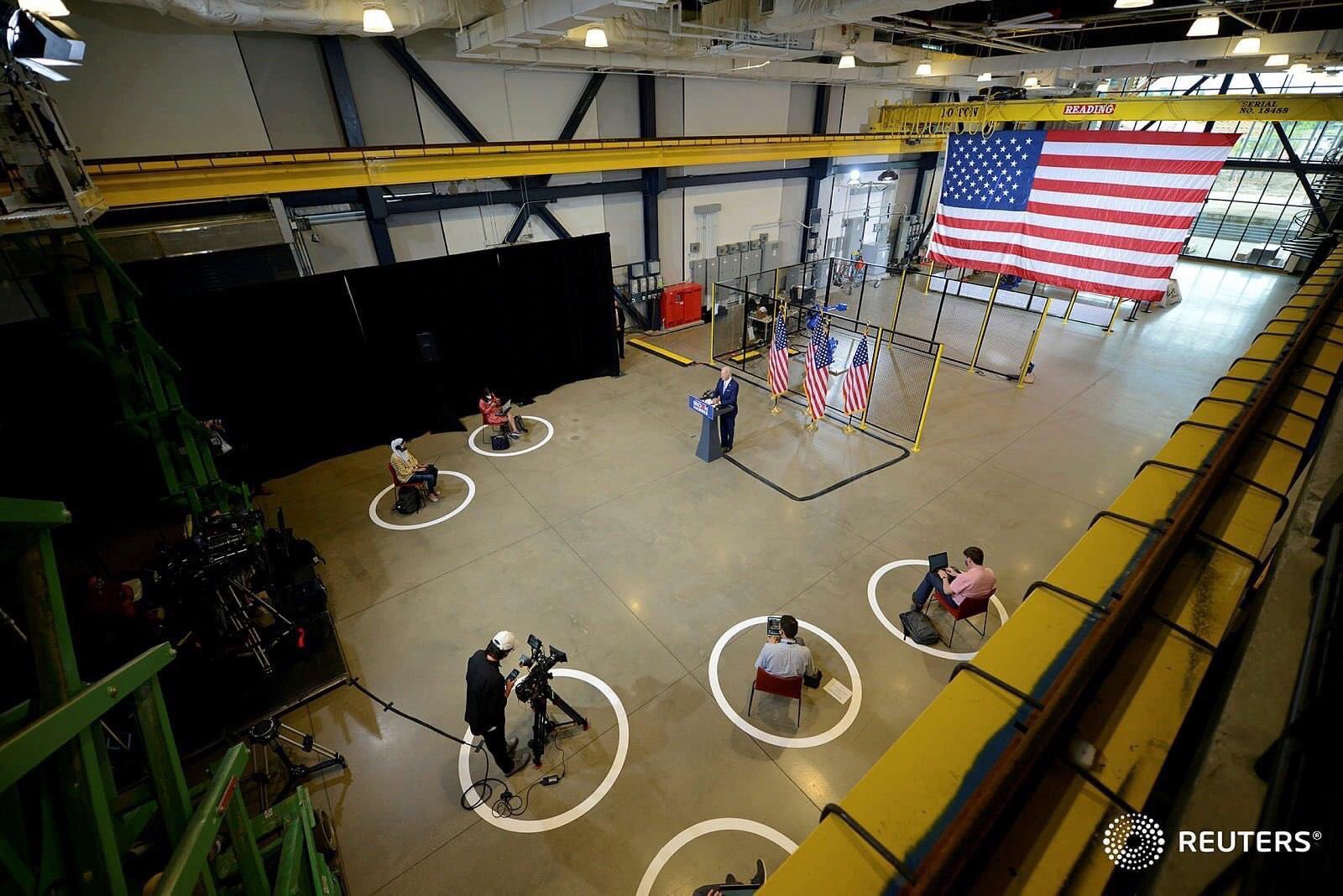 There’s the fading, elderly guy, almost alone in a cavernous facility of some sort, speaking only to a handful of fake reporters who wouldn’t dream of asking him a difficult question even if he agreed to take them. Not a single major media outlet showed this image or any like it to their reader or viewers. Not one.

Do you think the Trump Campaign would have received a similar courtesy from the media?

This is just one more of a million ways that our corrupt news media serves as nothing more than a support operation for the Democrats. The FEC should require the Biden campaign to report coverage like this as a campaign contribution in-kind.

I suppose old senile Joe Biden can’t have a stroke, I think you have to have a brain for that.

It’s a matter of public record that Joe Biden has already suffered multiple strokes and could suffer another at any moment, which perhaps accounts for his early dementia. That fact seems to be influencing some not to vote for him, so their only recourse is to falsely insinuate that President Trump “might have” had a stroke too. Unfortunately, they don’t have a single scrap of medical evidence to back up their ridiculous fabrication. It’s pathetic, really!

Kamel-ah Harris is a sleep-around ho who slept her way up the political ladder.
Tulsi Gabbard exposed Kamala for what she really is:
https://twitter.com/i/status/1293287924679794689

Time to fight back against these antifa/BLM (Burn-Loot-Murder) thugs like this little girl did.
Little white girl beats crap out of BLM fat butt.
https://twitter.com/i/status/1277623052902133763

The Democrats don’t even bother trying to look honest or legit anymore. They flaunt their nefarious and corrupt methodology because there aren’t ever any consequences for them.

Russian hackers got into his mainframe (brain) and planted malicious code?

Like a broken record… All the demoncraps have is smoke, mirrors and lies.

If it wasn’t so pathetic it’d be funny

The most pathetic sight were the straggling 20 or so outside the building. Biden’s campaign so inept they didn’t have a setup to show the speech to them.

Rip Van Biden – who sometimes emerges from cryptobiosis – is also known as Prince Valium from Spaceballs, and the groundhog in PA that predicts the end of winter – name is Phil.

Very reminiscent of 1992. Clinton was being dogged for his infidelities and the Dems were worried. They shopped a story of a Bush affair around, but Joe Conason could only get “Spy” magazine to print it (because there was nothing there, and “Doy” was a humor magazine). Once Spy ran it, other media could comment on that. Story was total Bs, but the media didn’t care; they just wanted it out there to help their guy.

Some were saying at the time that the President’s food tester had developed a sudden illness – and that it was from combining one type of substance in one food with a concomitant substance in another, the combination being potentially lethal. That’s the rumor.

Hence the sudden visit to the hospital. Unsubstantiated, but there have been attempts that have not been noted publicly.

Nancy will stop at nothing.

Poisoning was a very common way to kill leaders in the ancient world, such as Rome.

I wouldn’t put it past the crazed and depraved Democrats, who still hold many levers of power in the deep state.

Security for Trump has to be air-tight for the next two months.

Next two months? More like the next fifty months, if not for the rest of his and his family’s life.

I hope the President has retained his own private security from before he ran and they are working together with the Secret Service to provide iron clad protection for everyone remotely in his orbit.

And all cabinet members and members of congress must be given the same protection so we don’t have any more Scalise and Paul incidents/murder attempts.

Sad it has to be this way, but these are the times in which we live.