Is the Hidin’ Biden strategy coming to an end? – That’s what President Trump hilariously told an audience at a campaign rally in New Hampshire on Friday:

President @realDonaldTrump: Today it was announced that Joe Biden is coming out of the basement…in 10 days! pic.twitter.com/77MS7mj6DB

“Joe Biden is coming out of the basement again,” Trump said of the Democrats’ Unfrozen Caveman Nominee, who did announce plans to hit the campaign trail after Labor Day. “Here’s what I don’t get: He said in 10 days. That’s a long time. That’s like an eternity in ‘Trumpville.’”

Seriously, why in the world would anyone want to leave this? 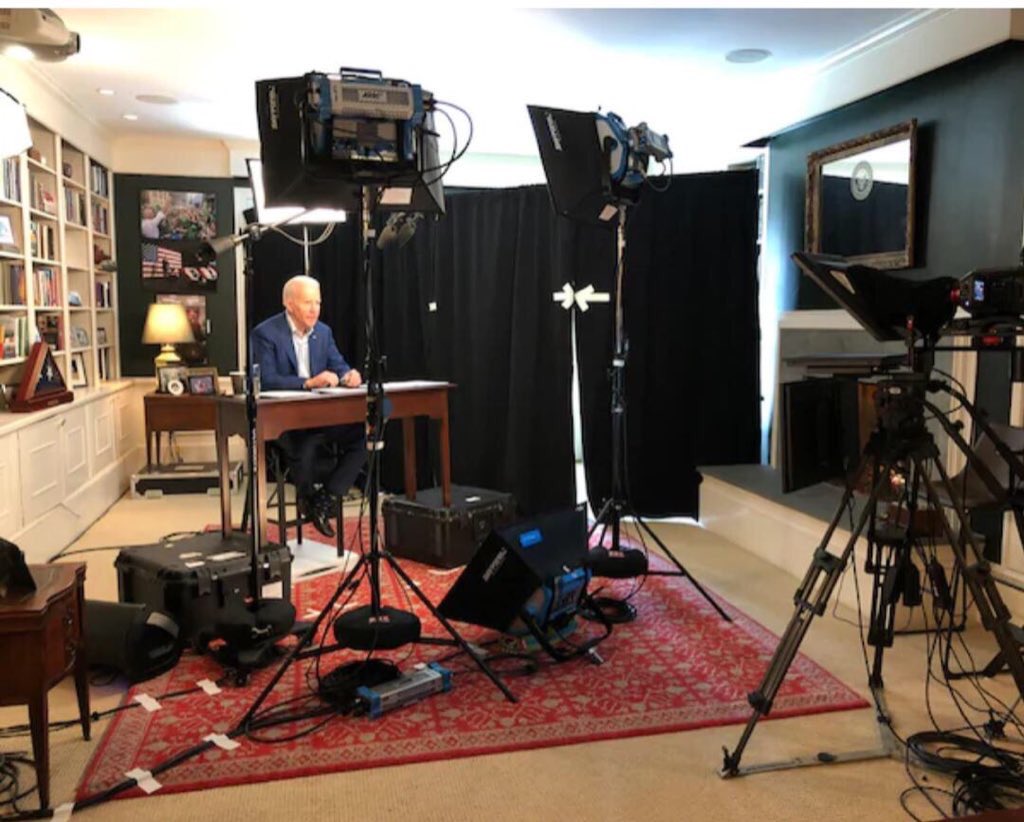 I mean, he’s got his own klieg lights. He’s got his own black curtain to keep away the prying eyes of his gardener and all the bird and lawnmower noise. He’s got his own desk propped up on big black plastic boxes, and he even has his own high chair. What more could a rough, tough presidential candidate want?

Here’s why Biden would leave his Hidin’ hole: Because the polls are turning. Not the corrupt, public Trump voter depression polls, the real polls, the polls and focus groups the campaigns conduct themselves to gauge the state of the race and guide their campaign strategies.

I mean, c’mon, you didn’t think the campaigns pay any attention at all to the Fox News poll or the RealClearPolitics average of all of these fake public polls, did you? Those are all for public consumption, for creating “news” stories out of whole cloth and for setting the daily Democrat/media narrative.

The campaign polls are the ones that matter, because they’re the ones that the Democrats in particular rely solely upon to make their campaign and policy decisions. The Hidin’ Biden strategy has worked quite well to this point, as it has allowed Biden’s elder-abusing wife and handlers to keep their dementia-addled candidate mostly hidden from public view, insulated from public exposure. The strategy has also allowed them to prevent their mannequin candidate from having to interact with any real reporters who might dare to ask him tough questions, and limit his media access to leftwing activists like CNN’s Anderson Cooper.

Let’s face it: When you have committed yourself to presenting the public with a candidate who doesn’t know where he is on any given day or how many grandkids he has, the smartest thing you can do is keep him hidden from that same public and press except under the most controlled of settings.

At the same time, the strategy has also kept the media spotlight on President Trump, allowing the media to focus all of its efforts on smearing him and creating an unending string of false COVID-19 narratives.

It’s all been a great success. But now, the conventions are over and the public has caught onto the game. The public has also begun to become increasingly repulsed by the images of the violent, communist Democrat-sponsored riots taking place in Democrat-controlled cities around the country. The polls over that Democrat tactic have shifted dramatically in the past two weeks, and they, more than any other single factor are what will ultimately drive Biden from his high chair in the basement.

So, why wait 10 days, until after Labor Day? Well, think about it: Biden’s elder-abusing handlers need every minute of that time to do their best to refine a strategy under which their Unfrozen Caveman Nominee is physically out of his basement for brief periods several days a week, but at the same time still as insulated as possible from any direct exposure to the public or interaction with reporters. We must remember that, until a week or so ago, these despicable brutes had seriously planned to keep Biden hidden away from the public right through Election Day, letting Kamala Harris handle basically all of the campaign’s public appearances.

But Biden’s no-bump convention and Trump’s masterful show that is already producing a bump, combined with the frightful images coming out of Kenosha and the streets of Washington DC have shifted the equation in a big way.

One more thing the 10-day delay provides: Enough time for Biden’s handlers to change their minds. They will obsess over their polls and conduct their focus groups each and every day until then, hoping against hope that the polls might shift back in favor of keeping their addled candidate in the basement. If they see the slightest movement back in that direction, then they’ll just concoct some excuse to keep him sitting in his high chair.

I’m really surprised Joe’s “handlers” didn’t actually build an Oval Office set for him to address his dozens of followers a couple of times a week.

You know, so he could be a ‘pretend president’ like Martin Sheen on the show “The West (Left) Wing”. That is about as close as GO-JO(e) Brain Biden is ever going to get to being in the Oval Office – unless he gets a tour – or president.

I also believe Sheen and other Hollywood ‘actors’ who have portrayed a US president actually think they are or were the president.

Last night I listened to a couple of MLB telecasts and it was obvious the announcers all got a script to talk ad nauseum last night about hyping “Jackie Robinson Day #42” (usually they do it in mid-April commemorating his debt in 1947) and it was sickening.*

Apparently every MLB team is going to plan a one day or game boycott to address the need for social change or whatever their bitch de jour is. The A’s (shocking from Oakland) have already skipped two games…

Are the players going to get docked a game’s worth of pay? Yeah right. Where is your oceanfront property Dave?

Really solid leadership Commissioner Manfred – you could have saved baseball and returned it to being America’s true sport’s pastime. Instead, you have chosen to follow the NBA’s and NFL’s SJW “woke” lead, and your sport will suffer accordingly.

* I’m only tuning into a couple of games to see what new woke-ness they have interjected into the game with very little actual interest in the actual game.

The demoncraps know there is zero chances of actually winning the election. Like a broken record, they are in full cornered rat mode panic and are going to pull out all the stops. They are desperately going thru the book of cheats, thieving and lies to see what they can use. They’ll dust off and toss against the wall anything they think will or possibly help.

IMO, they’ll declare sometime late Sept, early Oct a ‘second wave’ of covid, they’ll hammer the ‘mail-in-vote’ all the way up to the election, they delay the vote count, they’ll use or manufacture another shooting event, amplify Trumps ‘dark divisive super spreader’ events as disregarding human life, blm/antifa escalation of violence and intimidations. The typical communist playbook of destruction, chaos and propaganda.

What they cannot stop is the economy roaring back, people going back to work with numbers returning rapidly to pre-covid days, freedom from state government tyrants, riots being ended and charges laid by federal agents, massive voter satisfaction to Trumps handling of crisis. The demoncrap are seeing average demoncrap voters moving away from their communist parties agenda, seeing the black, hispanic voters moving away in droves. The writing is on the wall and they see it…

Its a war… stay the course and vote conservative down ticket… decimate the demoncrap communists for decades.

Great line from Larry O’Connor about the (until recently) Democrat inability or unwillingness to condemn the riots and violence:

‘Apparently, there are very fine people on both sides of the riots.’

Another data point in the emerging mosaic of Democrat doom:

May have been a “great success” generating phony polls and a phony image (which is all the Dems have ever done), but otherwise, I would argue, no success at all. Because if the Dems ever felt confident in their mannequin candidate, that he was really leading by that amount, they wouldn’t be be pushing the riots, CV-19 and mail-in voting. They would just use their standard 10% fraud vote from the DNC voter fraud division, and the 10% vote advantage from the media DNCNN-MSCDNC propaganda machine, another division of the DNC, and go with that.

No, this is not a confident party, especially now that the CV-19 panic is fading and much of the economy is rebounding despite their blue governor’s and mayor’s best efforts. The orchestrated riots are just another desperate attempt to change and obfuscate the Trump narrative of success for America, along with the USPS “scandal” and alleged Hatch act violations, and the SDNY Trump associate indictments etc., each of which is having less and less impact.

Speaking of mannequins, a mannequin would be a better candidate, because a mannequin wouldn’t generate gaffes. What they really needed was a ventriloquist dummy. Actually, what they really needed was a real person to be a real candidate and, as Dave has mentioned, the only one who actually came close to being articulate and appealing was the Hawaiian Heroine, and she was quickly Schiff-canned by the powers-that-be at the DNC, but before until she effectively Schiff-canned Karma Roundheels. To let that happen was a mistake on their part.

If they could manage it, I think a CGI candidate would be their preference.

I don’t think the numbers are going to shift back.

Here’s an example–in Wisconsin, in less than two weeks the polling went from +25 in favor of ‘protests’ to 0.

If the data is shifting that precipitously and that quickly, it’s no wonder they are panicked.

And they have candidate Non Compos Mentis. Against Trump. They are screwed.

I expect them to turn all their efforts to post-election chaos. The antifa shock troops are already being redistributed.

Yep Phineas, the antifa/blm “shock troops” are being redistributed, but the only ones “shocked” will be them when they face real opposition when a newly reelected President Trump will end their rein of terror.

The other ones who will be “shocked” will be their organizers would will be RICOed along with the governors, mayors, city councilmembers, sheriffs and police chiefs and the DAs and judges who aided and abetted this crime wave.

Did anyone hear that recently the VA DEMOCRATIC Legislature just voted to change the law from a felony to a misdemeanor (at the judge’s discretion) regarding an assault and battery on police officers?

Yes, police have now officially been devalued by the VA Democrats and Governor Blackface.

Meanwhile, in the DeBlasio communist utopia, there is this:

Their intent is to prevent the election results from being certified.

They have their plan in place to do so. Antifa-engineered chaos is a big part of it.

Camela (she does look like a camel) Harris will be flying, riding, running, jumping, doing splits (is there anyone she can sleep with to further her ambitions?) and screaming, shouting and moaning in order to secure her Presidency.

Watch out for Camela – (don’t stand too close) – she spits like a camel too.

He’d better come out on a cloudy day, or he’ll see his shadow and fearfully rush back inside.