“Look, look, here’s the deal: The piggy says ‘oink, oink, oink,’ and if you disagree with me, you ain’t black, Jack.” – Let’s start with this bit of all-too-realistic hilarity from the folks at the Babylon Bee:

Admit it: It’s only funny because you initially think it might be real.

Ok, now, this really is real. – Watch as the Democrat Party’s Unfrozen Caveman Presumptive Nominee reveals what he truly does think about America’s Black community:

.@JoeBiden: “Unlike the African-American community, with notable exceptions, the Latino community is an incredibly diverse community" pic.twitter.com/CFO4Q40jEI

And here’s the truth: This is not just how Joe Biden really thinks of African Americans – that they’re monolithic thinkers, all the same, all should vote Democrat or “they ain’t Black” as he stated a few weeks ago – it’s really and truly what the Democrat Party as a whole thinks of them, and has for…well, pretty much forever.

The problem Biden as nominee presents to the Democrat Party – well, one of the thousands of problems – is not merely that he is racist: It’s that these old ways of ‘talkin’ to black folks’ are so ingrained in his diminishing mind that he is not able to break the habit. He can’t be trained to engage in the leftist double-speak that now dominates Democrat Party condescension to the Black community.

This is why you likely will never see Biden on a stage debating President Donald Trump for 2 or 3 hours this fall. I saw one TV talking head defend Biden the other day by pointing out the fact that he has already participated in half a dozen televised debates with his Democrat opponents over the past year. There are several reasons why Biden’s participation in those debates does little to prepare him for a debate with the President:

– He was debating fellow Democrats with questions coming only from fawning Democrat activists pretending to be “journalists;”

– His total speaking time during any one of those debates never amounted to more than about 10 minutes and was far less than that in several of them; and

– He was not getting hit with pointed rejoinders by a hostile opponent, with the lone exception coming when Kamala Harris cynically pretended to have been one of the children of the 1970s who was impacted by Biden’s opposition to forced busing [she wasn’t].

It is one thing for an elderly man with a declining mind to keep things together well enough to survive about 10 minutes of actual participation in a debate with a dozen other people. It is pretty easy to just sit back and hide in such a situation, which Biden did throughout most of those debates. And we need to remember that, even with all of that, he still horrifically embarrassed himself time after time after time.

It is quite another thing entirely for such a man to hold things together for 2 or 3 hours on a stage with a single opponent with no place to hide. As we have seen three times now in just the last 24 hours, Biden is simply not capable of avoiding saying embarrassing things even when faced with pure softball questions. On the rare occasion he is faced with an actual semi-tough question – as he was yesterday when the Black reporter asked him if he has ever taken a cognitive test – he is prone to having irrational outbursts and childish temper tantrums.

This is who Joe Biden is, folks. He was a walking gaffe machine decades ago, long before his mind started to decline. Now he has pretty much completely lost his filter, and we see all the racist stuff just come pouring out of his mouth before he even realizes he’s doing it.

I’ll leave you with this wonderful clip of Robin Williams doing a tremendous parody of Biden back in 2009. It was relevant then, and even more relevant today [profanity warning]:

Robin Williams in 2009: Joe Biden is like your uncle who's on a new drug and hasn't got the dosage right. pic.twitter.com/zFUrIYiwVR

It can’t be racist if you are black! And Joe is black, it’s the black’s who aren’t black. And if you have problems voting for Black Biden, then you ain’t a lion or an elephant! Makes sense to anyone, doesn’t it?

“Makes sense to anyone, doesn’t it?”
‘
Totally… and its why I never buy bananas at yard sales…because you know… the thing

I want this pasty white (privileged) man of 36 undistinguished years in the senate and eight equally undistinguished years as VP to be the nominee all the way through to Nov.3. America needs Joe the Biden and his 45 year DC record of nothing to be the face (the figurehead) of the Dem Party. We need him to be the embodiment of todays Democratic Party for this election; to be the lackey of Sanders, AOC, ‘the One’, Bozo Beto, Walking Eagle, and Round Heels or whoever he is told his VP will be.

The Dem honchos flushed their radical ‘outsider’ in order to save the down ballot races as Joe the Biden was seen as their safe bet to avoid electoral catastrophe, but he has been forced to (actually willingly) adopt virtually every Sander’s plank in order to try to keep their party from imploding. They desperately want to project Biden’s image (that is all the Dems do is project) of ‘moderation’ like they got from BJ Clinton and ‘the One’, but instead they now have GO-JO(e) Brain Biden’s empty head and Sander’s radical anti-capitalist, pro-communism agenda, sans his charisma and appeal to a huge part of their dopey lefty base.

After all, he ‘won’ the Dem primary thereby proving he is their best, the most capable, the most experienced, the most electable, star in their pantheon of hacks, liars, miscreants, tramps and thieves – a collection of such people that boggles the mind that one organization could ever assemble.

The real long-term problem America faces is the fact that at least fully 40+% of the country will vote for Joe schiff-for-brains Biden; he shouldn’t get 2%; he shouldn’t be at the top of any party’s ticket, let alone one of the two major political parties in the third largest (population) country in the world.

Say what you want about any Republican presidential or vice presidential candidate, never has there been anyone less capable, less coherent, or less accomplished than Lunch-bucket Joe. Therefore he is the perfect ballot filler for the least perfect political party in American history.

“Round Heels”…! Love it, stealing it, accur-it!

I try to make up names for these dangerous, but contemptible clowns so as to avoid this site’s censor and to provide a little humor. Glad you like them and feel free to use them all.

You are still assuming a normal election.

The Dems have moved past that to all-in on mail-in voting. The nominee, Biden or whoever, is largely irrelevant now. They have decided to manufacture the outcome they want.

While very true that Demoncrap have switched to full on cheat mode and it doesn’t really matter who the *cough* leader is… It certainly is entertaining for us and its bewildering a lot of the centrist democraps into swinging to the right. So I agree with Gregg that it is a good thing and hopefully gropey joe will be weekend bernie’d up to the finish line in Nov.

Joe believes all blacks are the same, and they lack diversity. I personally think his opinion is racist, but at least when it comes to politics why would Biden think any differently. The democrats have done almost nothing to improve the lives of black citizens, and they keep voting for democrats. Some people, including me think that Joe “Dirty Digits” Biden in a POS, but in this latest instance Joe was just calling it like he sees it.

Why is the party of the vibrant tapestry of diversity all rich old white people at the top?

Just living up to their confederacy roots.

Since the Biden Family has been inbreeding for generations, I am not surprised… 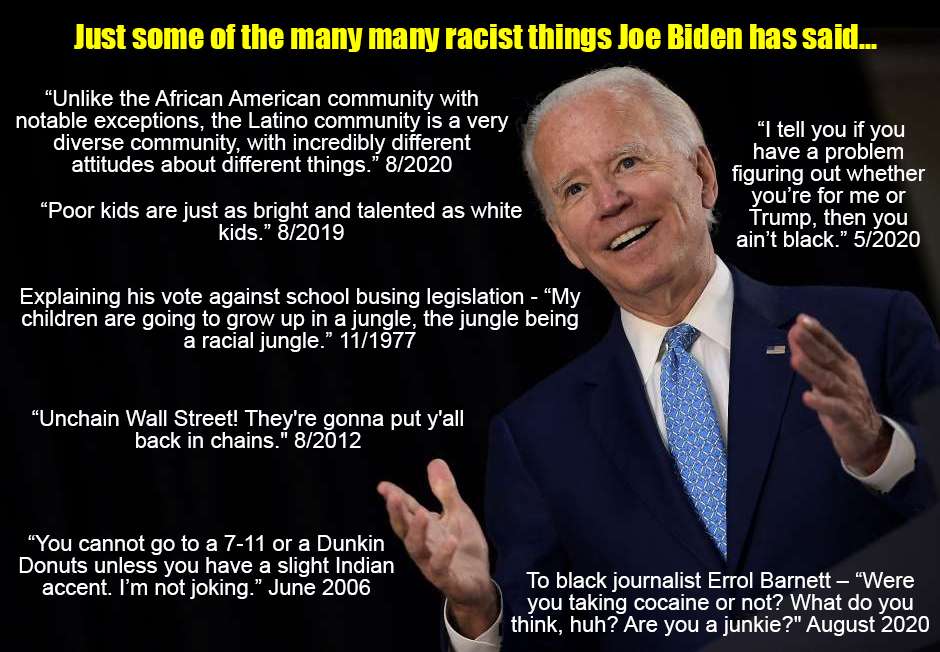 That is the nuclear option the Dems will choose.