The woman is a cancer-breeding and cancer-killing machine. – Think about it: How many people have you ever heard of who have had lung cancer, stomach cancer, pancreatic cancer and liver cancer over a span of less than a decade and lived to tell about it?

That’s the record that the extraordinarily enduring Ruth Bader Ginsburg has now racked up in recent years. Today, she announced that she has been receiving treatments for liver cancer since May and the Supreme Court has managed to cover that little fact up until now. She also claimed that her hospitalization earlier this week had no relation to her latest battle with cancer, but that seems hard to believe.

From a report at Fox News:

“On May 19, I began a course of chemotherapy to treat a recurrence of cancer,” Ms Ginsburg said in her statement.

“The chemotherapy course… is yielding positive results,” she added. “My most recent scan on 7 July indicated [a] significant reduction of the liver lesions and no new disease.

“I am tolerating chemotherapy well and am encouraged by the success of my current treatment,” she said. “I will continue bi-weekly chemotherapy to keep my cancer at bay.”

Supreme Court justices serve for life or until they choose to retire, and supporters have expressed concern that if anything were to happen to Ms Ginsburg a more conservative judge might replace her while President Donald Trump, a Republican, remains in office.

“I have often said I would remain a member of the Court as long as I can do the job full steam,” Ms Ginsburg said in the statement. “I remain fully able to do that.”

Everyone should wish the Justice well in this latest battle – there is nothing more terrible than having to deal with cancer, and she has established perhaps the most amazing record in human history of beating forms of the disease that kill a very high percentage of those who suffer from them.

That having been said, the truth about her last statement in that excerpt – “I remain fully able to do that” – is that she is only able to remain nominally on the Court because staff and interns perform 99% of the actual work for her. In that, she is certainly far from the first justice to retain a seat in that way, but unlike her survival skills, it is not something anyone should admire.

The fact that this ailment was kept a secret from a public that deserves to know is also nothing to admire, but not at all surprising for an institution led by a living chameleon, Chief Justice John Roberts.

Meanwhile, in REAL news… – There is no new low to which the members of the White House press corps will not stoop.

Today, a Reuters photographer made it his job to invade the privacy of Press Secretary Kayleigh McEnany, worming his way close enough to the podium to get a shot of the tabs on her famous briefing notebook that she brings into every meeting with the assembled enemies of the people. 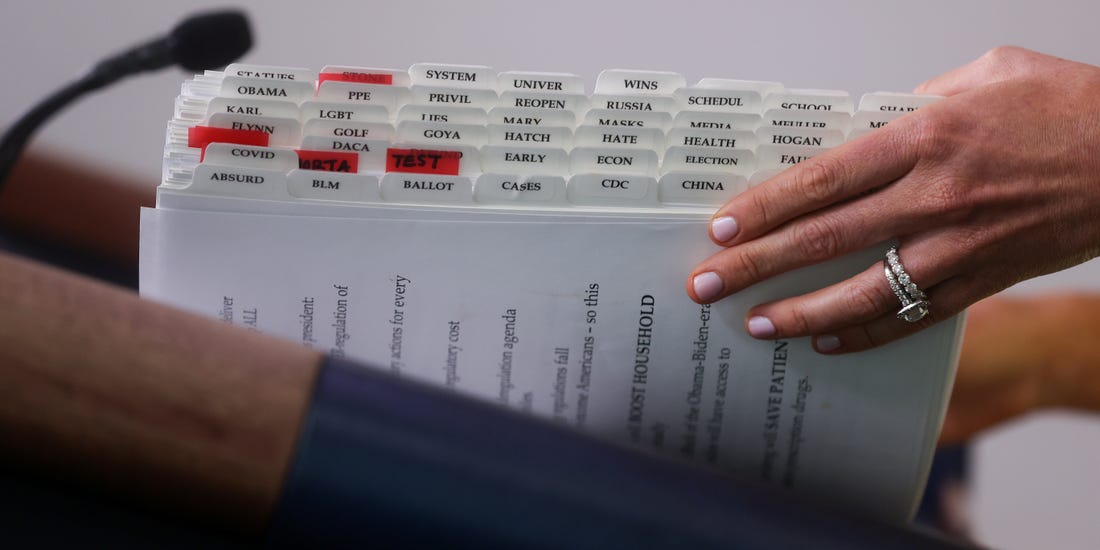 All the corrupt, blue-check media hacks on Twitter are making a huge deal about the tabs titled “Hate” and “Absurd,” but the obvious explanations for those are easy:

– “Hate” contains answers to any question posed by PBS reporter Yamiche Alcindor; and

No one who follows Jesus/Yeshua the Messiah/Christ wishes harm on RBG tjhrough cancer or otherwise; they may want to see her displaced from her position, but we are to pray for our enemies – which in her case, is to pray that she will come to know Yeshua as her Lord and Savior and be Saved – and all the things that follow Salvation. That is my prayer, in His Holy Name,
amen

Some people claim to know a god, just like some people worship rats and cats and dandelions and wooden images – and mostly, themselves. They can neither deliver us from evil nor do they know the real G0D of Abraham, Jacob and Isaac, nor in the Son.

Live, Ruth Bader Ginsberg, live – but repent while you still have a breath. The Lord is giving you opportunity after opportunity, but your opportunities grow slimmer by the hour. It is a dark place where you are heading. Same with others who want you dead.

These media turds really have balls. Acosta not giving up the mic to the intern, and now this, and I’m sure plenty of stuff in between. They would never have dared do this to a Dem president’s press secretary.

And apparently no one can ever get their creds pulled. It is time to start investigating these reporters ant their bosses. I’d like to know how many of their ilk have been on flights to a certain private island in the Caribbean? There is no way these people are squeaky clean; probably many more are like Lauer and Rose than we can imagine as they all seek the same acceptance and accolades from the same group of power players.

I in no way praise or wish the anti-American anti-Constitution RBG well. Sorry, I just can’t. She should have retired long ago – actually should never have been confirmed. I remember the soft confirmation she had back when Hatch didn’t press her for anything – she got the kid glove treatment as if she were royalty and it came soon after the attempted and vicious, torturous Borking of Clarence Thomas which has become the standard for any Republican appointee.

There also needs to be a basic annual competency test for anyone in government who is past the age of 75. These people, who make monumental decisions that affect the lives of most every American, need to be certified as to being up the the task and if found deficient need to be retired.

The constitution granted lifetime appointments to judges back when very few people lived past fifty years.

Speaking of the constitution, Justice Scalia said in a speech not long before he ‘died’, The Constitution would never have been ratified if nine judges were seen to become the final arbiters of bills passed by the legislative branch and signed into law by the president. How true and how tragic it has become just that, where five unelected judges run the country in so many ways.

Bud May
Reply to  Gregg

No, no, no. Those are appendages to a man. But, on everything else, you’re right on.

I am quite stuffed to the gills with this writer’s politeness and PC attitude. I HOPOE CANCER CANCELS MS RBG’S TICKET TO RIDE on the SCOTUS very soon.

I like Dave’s tactful analysis and the way he presents the facts in a clear and decent manner that leaves no doubt as to his take on the subject at hand. He is not PC!

But I agree about RBG – see my comment on her below.

As I’ve said about “Judge-in-name-only” Sullivan, law clerks do the majority of the work (just as legislative aids do the work for Representatives and Senators.) As long as Justice Ginsberg can blink her eyes once for yes, two for no, her clerks will perform her work for her. In most courts these days, that is the norm, not the exception.

Interestingly, stone sculptors of repute (and some painters) had students do the rough or base work, while they were overseers, only stepping in to do the delicate work (perhaps.)

Live on, Ms. Ginsberg, and be well, but don’t be a Captain Pike.

Its understandable the need for clerks. The HUGE volume of rules, regulations, cases past would be an insurmountable obstacle for any justice to wade thru in their attempt to bring justice. Not that they do any longer.

Most justices just hire activists whose job it is to find precedent that justifies their predetermined rulings, regardless of the mental gymnastics needed to get to the ruling. Once ruled upon and not appealed it sets the stage for further erosion by allowing following rulings to use it as precedent. And the erosion of justice and rule of law continues its downward spiral towards debasement, pun intended.

Will RBG retire??? No… Pride will rule the day and she’ll stay there until they carry her out. She needs a divine intervention, a change of heart or her last breath will be the nightmare that doesn’t end. Shes done a lot of damage over her lifetime but Christ still died for her too and by Gods grace she too can escape the second death. One of the hardest lessons to learn… blessing the ones that persecute and spitefully attack you without retaliating and wish ill of the attacker. Lord… bless RBG… open her eyes.

I wish the BLM tab had information that the Prez will be designating them a terrorist organization later today.

We all knew PS McEnany was well prepared but DAMN! No wonder she can gobsamck the press on every “crisis” they throw at her. As Ron White says You can’t fix stupid”.