Molly McCann is of counsel at Sidney Powell, P.C., the defense firm for General Mike Flynn. On Twitter today, she took apart yet another piece of false reporting by the corrupt Democrat activists at the New York Times. It’s a brilliant take down that everyone should read.

Here is McCann’s destruction of the Times’s despicably false piece, in full:

The New York Times has no credibility as it continues to maliciously twist the truth with “reporting” that obfuscates the truth and panders downright lies. In an op-ed today, the NYT takes facts and tries to create a completely false narrative. 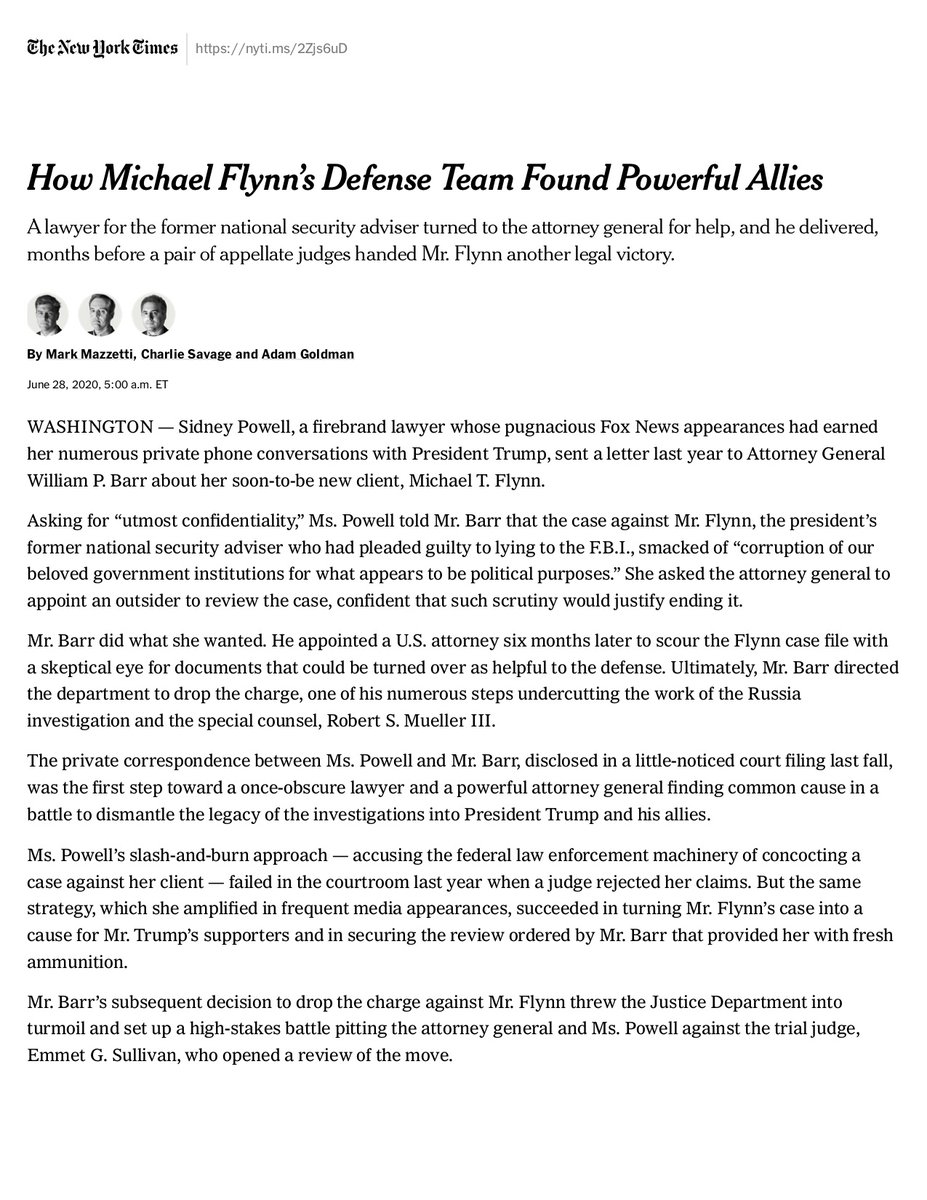 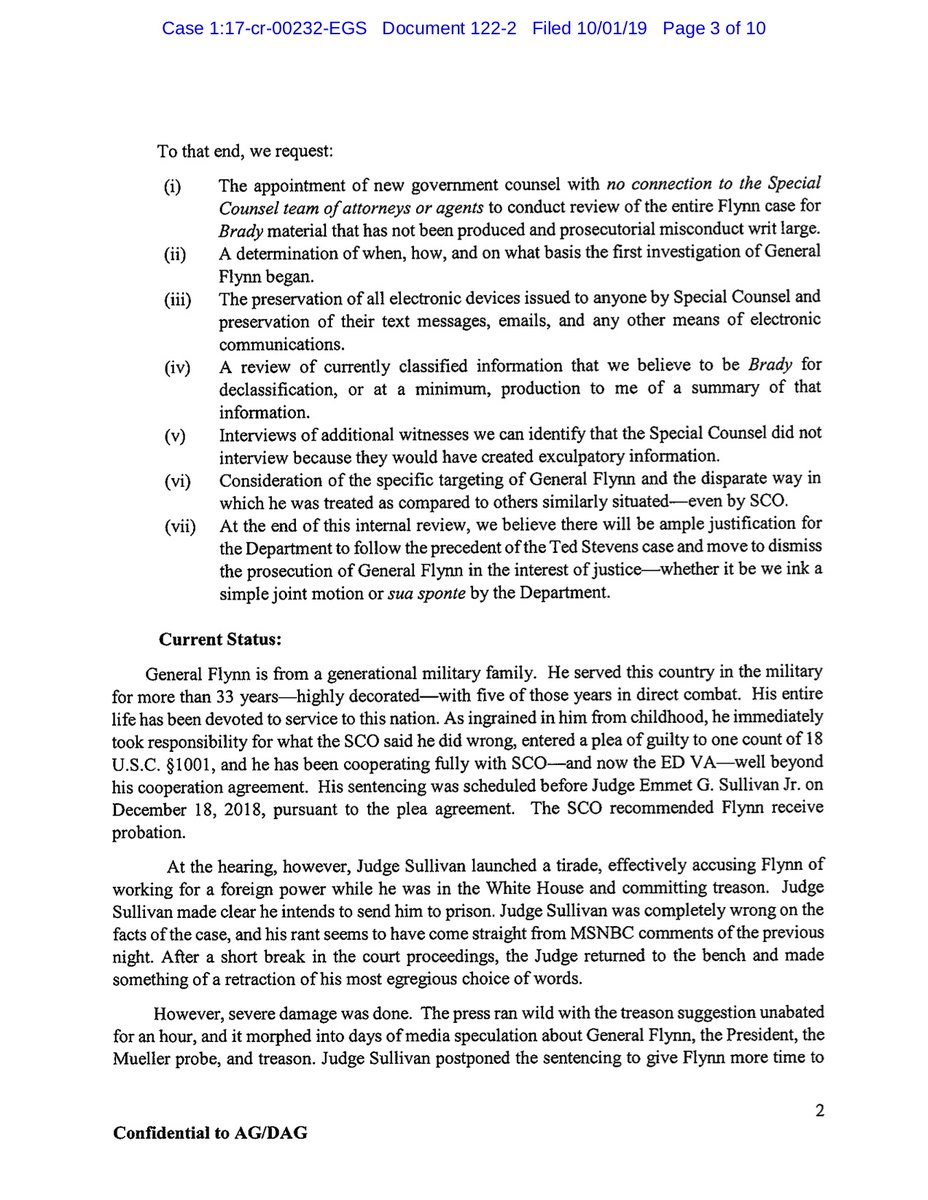 …to preserve confidence in the rule of law. 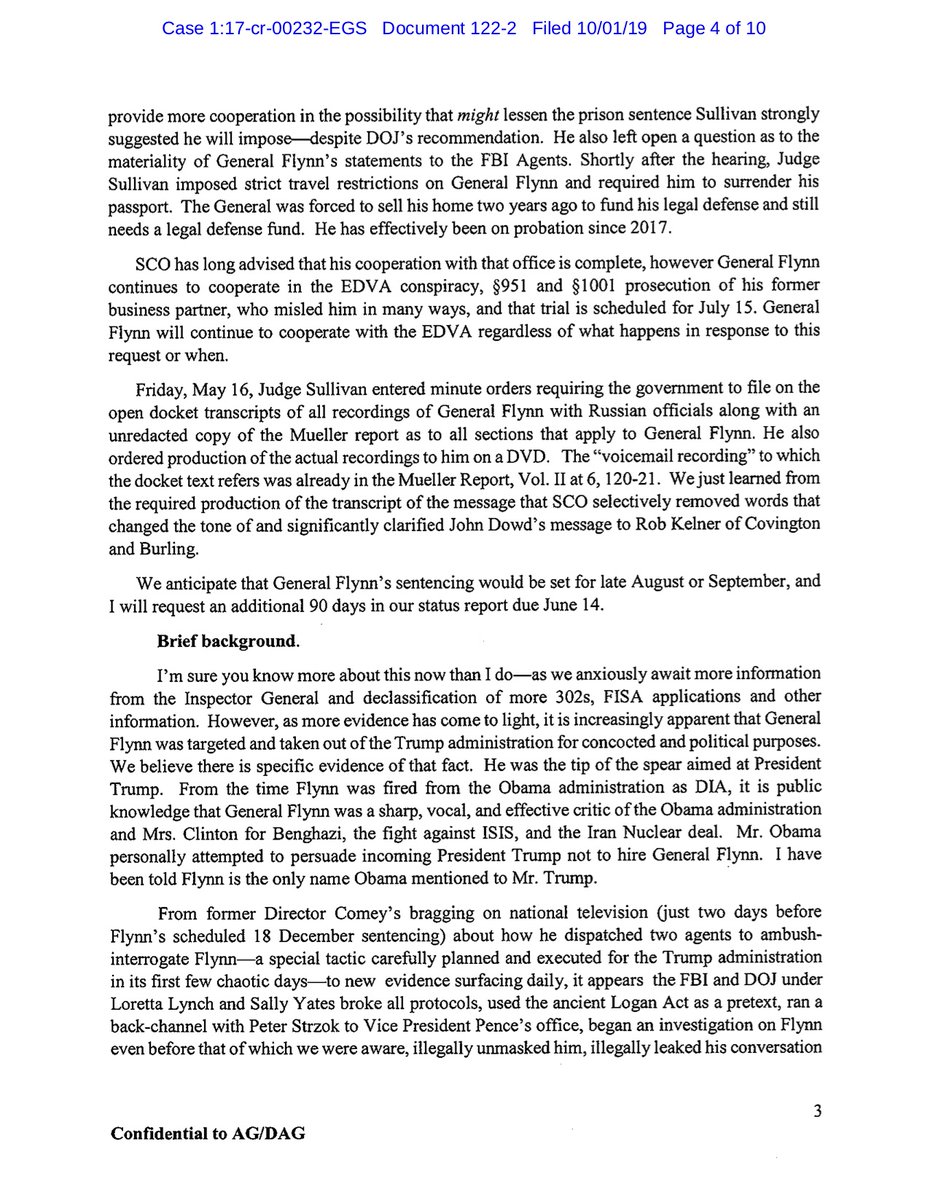 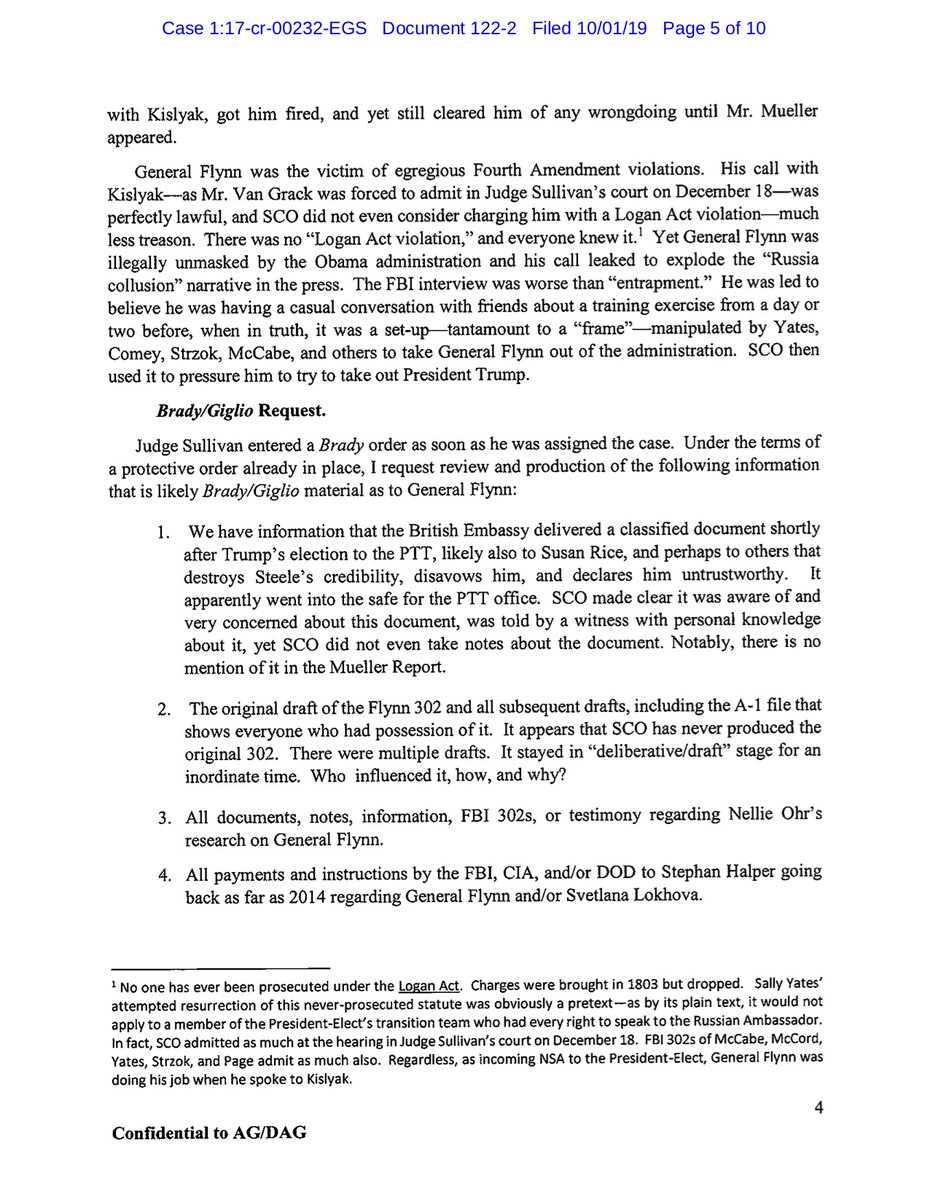 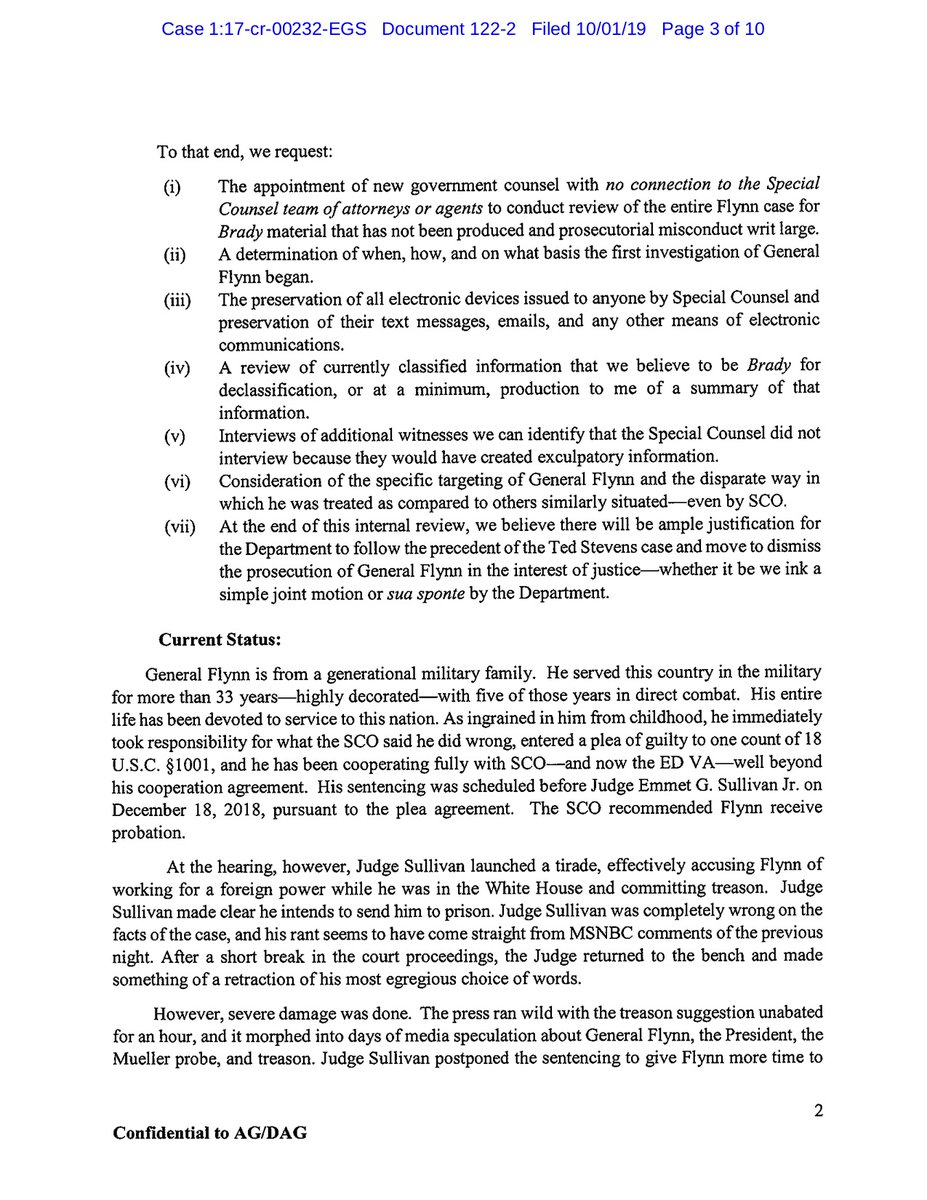 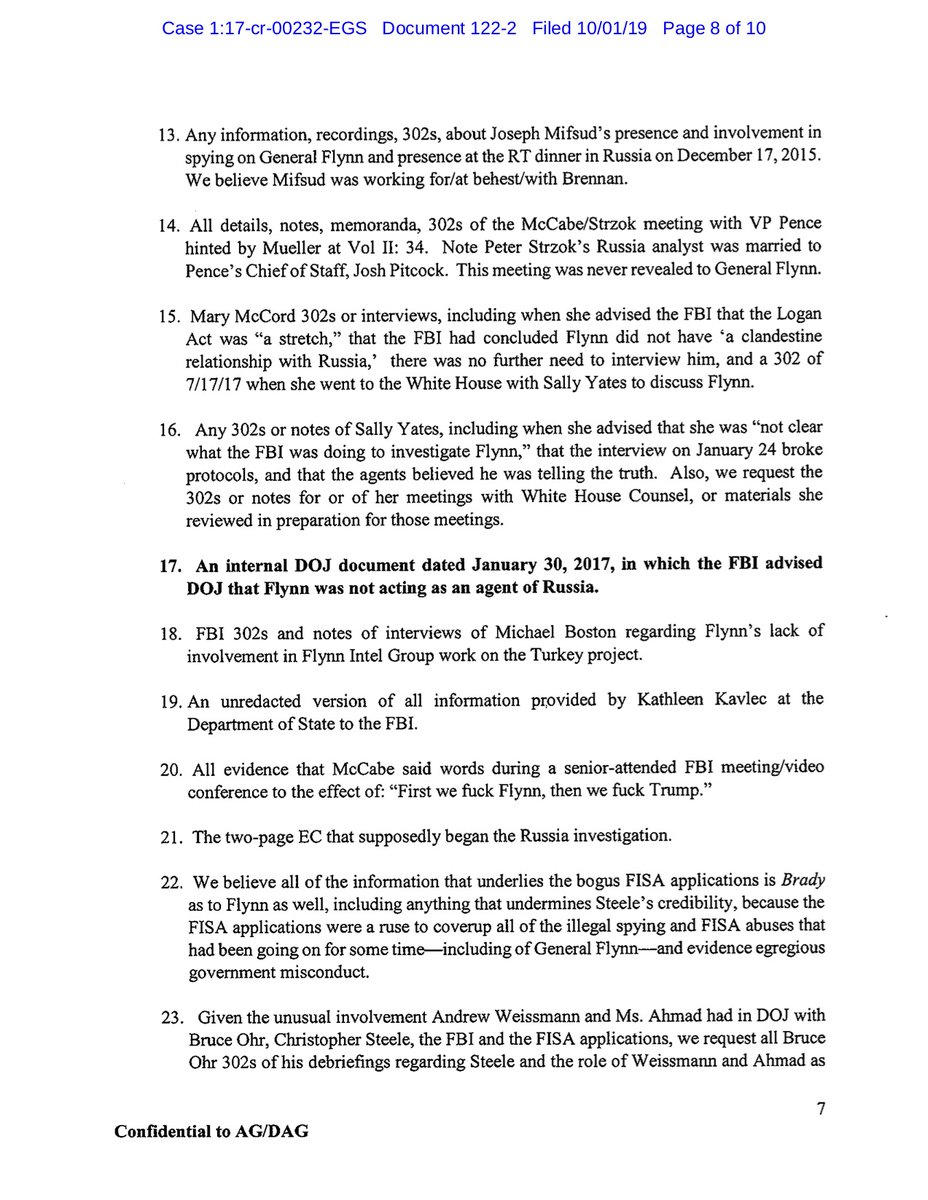 AG Barr forwarded Sidney’s letter to lead prosecutor Brandon Van Grack, who replied that there was no further Brady material outstanding (quoted at ECF No. 111, attached). Van Grack publicly filed the majority of Sidney’s letter on Oct. 1, 2019. ECF No. 122-2. 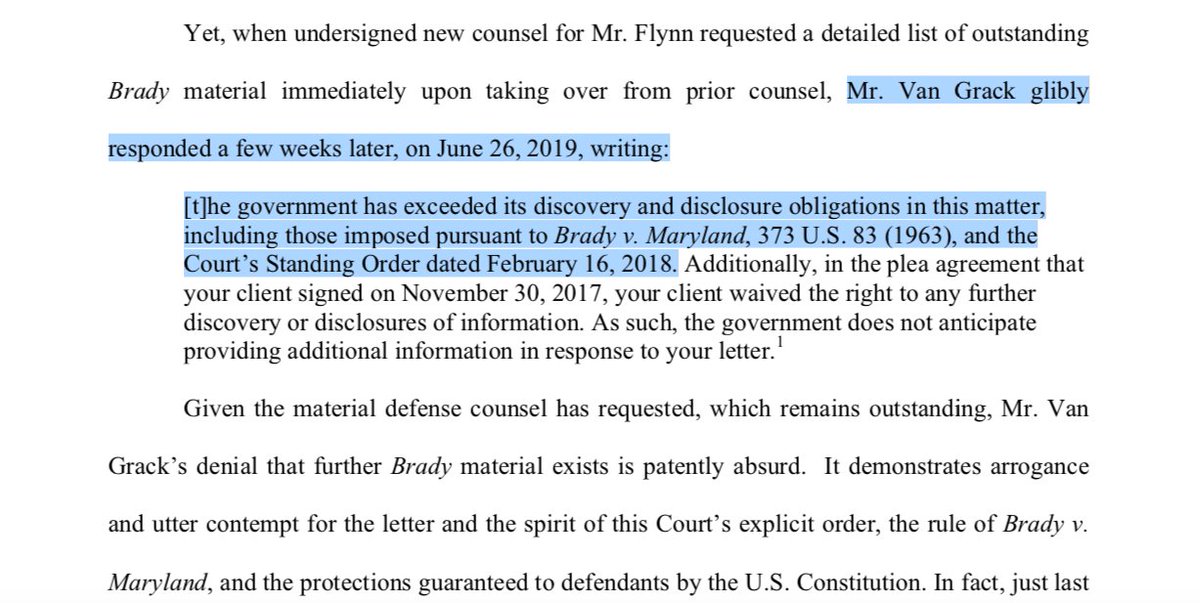 There was no underhanded secret here. Sidney was vocal about her view of this case long before she took on Flynn’s defense. She wrote an op-ed in February of 2018 urging Gen. Flynn to withdraw his plea.

General Flynn Should WITHDRAW His Guilty Plea. His New Judge Is A Government Misconduct ExpertJudge Emmet G. Sullivan knows a cover-up when he sees onehttps://dailycaller.com/2018/02/16/general-flynn-should-withdraw-his-guilty-plea-his-new-judge-is-a-government-misconduct-expert/
Ironically, Sidney believed Judge Sullivan—appointed to the DDC by Clinton—was the judge best equipped and experienced to know that the prosecutors had made up the case and were hiding evidence of Flynn’s innocence, as she also detailed in a Dec. op-ed:

POWELL: New Facts Indicate Mueller Destroyed Evidence, Obstructed JusticeMueller’s team lost a crucial cell phone — and it turned up with its contents erasedhttps://dailycaller.com/2018/12/16/mueller-destroyed-evidence/
The NYT says that at its core the Flynn case “is a drama about who gets to mete out justice in the Trump era.” In this, at least, it is correct. The Flynn case has exposed the frightening reality that certain people will let nothing and no one stand in the way of power.
These people cast aside any semblance of honor or integrity, targeted Flynn, and sicced corrupt prosecutors on him. They were willing to tear down the rule of law and destroy the bedrock principles of justice and due process on which our system depends, all for their own…
…political purposes. Those purposes were to destroy General Flynn and the reforms he would make to the intelligence community and to topple a democratically elected President—Donald J. Trump.
The Flynn story is the story of the most breathtaking abuse of power in our nation’s history. And the (not failing, but failed) New York Times is attempting to cover-up that scandal by fabricating tales to hide the truth. But the facts speak for themselves.
Barr asked Jensen—a career DOJ attorney—to review the Flynn file and Jensen uncovered exculpatory evidence so breathtaking it has rocked the foundations of our Republic. This evidence is black and white—they ignore it, because it is so ugly and unambiguous they can’t…
…even spin it, so they pretend it never was produced. In any other time and with an even partially honest media, this story of corruption would be on every front page.
General Michael Flynn was set up by people intent on maintaining power no matter what institutions, principles, or people had to be hacked to pieces in the process. This type of false reporting from the New York Times is not just biased, it is subversive.

ROFL…you know you’re being dissed when the thrashing so thoroughly delivered was staffed out.

So, are we at all surprised? I for one am not.

So when does Judge Sullivan get what he deserves?

A Writ of Mandamus might not seem like much to the outside observer, but it’s like being tried by actual professional peers and being found incompetent or non compos mentis and absolutely unprofessional. It is worse that he hired outside counsel to represent his views, because his views were probably written in the first place by law clerks, who do the lion’s share of the workload a judge has to deal with.

If he proceeds further, he proves himself to be a sordid gambler with an ego bigger than a small planet; his epitaph will already show that he’s a fool, once perhaps noble (as Dracula was once in the fictional novel, before the curse) – and he will be remembered as someone who let his politics and his masters )Obeelzebub) undermine his legacy. So from doing something foolish, he becomes a fool.

Law clerks who work for him need to be investigated; who do they answer to? We might as well consider him punished, but these underminers of justice haven’t been dealt with nor even exposed. Have you read anyone else publicly suggesting as much?

Of course not. But there it is; I’ve given the code here. Somebody use it. Or STFU and never dare to complain again.

Every law clerk who later became a lawyer or judge knows exactly what the hell I’m referring to; they cannot pretend otherwise, but can’t bring themselves to actually admit to it.

So what has become of Brandon Van Crackhole? The brazen liar – where is he now?

He should be under investigation. Should be. But DOJ scumbags are like ticks: unless you crush them, they show up to suck something or someone else.

I’m not a big fan of doxxing, but his is a case that screams for it to happen; dox the bastard and dox him good, like you’d put flea and tick powder on a tick infested dog (which represents the DOJ, even to this day.) Attorney General Barr can’t do it alone.

The symbolic ghost of Brady condemns the all-too-living demonic entity known as Brandon Van Crackhole. There must be a remedy for lying out the crackhole.