Tired of all this WINNING yet? – Stocks rose again on Tuesday, with the NASDAQ achieving its 21st record-high closing level of 2021. Even better, the U.S. Bureau of Labor Statistics announced that U.S. housing sales leapt by a whopping 16.6% from April to May, and that May’s level of sales was 12.3% higher than in May 2019. This is what the Democrats and their corrupt toadies in the nation’s news media want to destroy.

Don’t expect there to be a vaccine for the Wuhan Virus, folks. – Students of strategic communications will understand that Dr. Anthony Fauci made that pretty clear in testimony to congress yesterday. Look carefully at the statement he made there:

“I still think there is a reasonably good chance that by the very beginning of 2021, that if we’re going to have a vaccine, that we will have it by then,” he said.

Now, NBC, Vox.com and other leftist fake news outlets reported on that in a way that makes it sound as if Fauci is saying we will have a vaccine by the end of this year. But is that what he really said there?

Break that carefully worded, pre-prepared statement down: “I still think…” “there is a reasonably good chance…” “if we’re going to have a vaccine…” “we will have it by then.”

So, Fauci “thinks” – he doesn’t feel confident, he isn’t sure – “there is a reasonably good chance” – define “reasonably” please – “IF we’re going to have a vaccine” – not “when” – “we will have it by then.” That’s a lot of weasel words in one sentence, folks.

That statement does not convey confidence. In fact, it conveys that the speaker has a tremendous amount of uncertainty, and perhaps even a knowledge that he really doesn’t believe we will have a vaccine – at least not an effective one – at all. So he feels the need to use this highly-qualified language in order to avoid being accused of lying later. Which, given Fauci’s track record of never having found an effective vaccine for any previous virus during his 40 year career, makes complete sense.

If you’ve been thinking that it wouldn’t be any big deal to just shut everything down again until the first of the year when Fauci and Bill Gates will presumably deliver unto us a miracle cure, you might want to think again.

The American Taliban is now putting out meeting minders. – A group of Antifa/BLM agitators gave  the U.S. Park Police and other federal law enforcement agencies a head’s up yesterday, literally announcing to the world that they plan to topple the Emancipation Monument in Washington D.C.’s Lincoln Park at 7:00 on Thursday. That’s Eastern Time, for all you folks at the FBI. 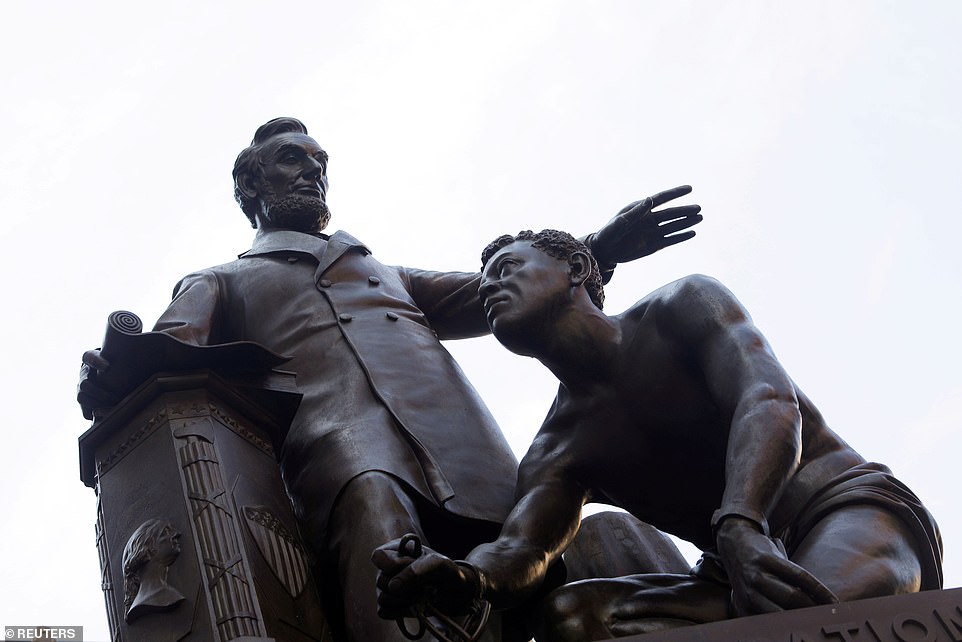 From a report in the Daily Mail:

President Trump called on Congress to act Tuesday night after protesters in Washington D.C. were seen burning an American flag.

The president branded the demonstrators ‘lowlifes’, adding that it ‘should be stopped’.

His criticism came after protesters pledged to tear down Lincoln’s Emancipation Memorial in the Capitol, vowing to return to Lincoln Park Thursday night to topple the controversial statue.

Organizers of the protest said they would not be working with the police and would achieve change ‘by any means necessary’ as they crowded near the 150-year-old statue paid for by former enslaved people.

Although paid for by former slaves, the Emancipation Memorial is criticized as it was designed by white people and depicts a former slave in a subservient position to Lincoln.

Given that we can be certain that DC Mayor Muriel Bowser will not lift a finger to preserve this memorial paid for by freed slaves, the ball here is entirely in the court of President Donald Trump and the federal Park Police. At least they know when to show up.

Hey, those mail-in ballots are fine – no potential for fraud here at all. You can trust those Democrats to keep everything on the up and up. Nothing to see here, er, um, well…

Election integrity watch: As many as 30% of Republican voters in one NJ borough received Democratic mail-in ballots: Report | Just The News https://t.co/As7DgMeIkT

Where is it and why is it not being released?

The country is being ripped apart and that event was the catalyst. Does anyone want to get the whole story or nah?

John Solomon at JustTheNews.com has an interesting piece this morning. – Yeah, Solomon has been one of Sean Hannity’s Tick-Tock crew for the past three years, but he also does tremendous investigative reporting and is often very perceptive in his analysis.

This piece is titled “Seven big hints Barr has dropped about Durham’s investigation of the Russia investigators,” which is self-explanatory. Most of it is stuff I’ve already covered here, but #4 on Solomon’s list is worth noting again:

4. Barr views the FBI’s continuation of the Russia probe after the Steele dossier “collapsed” as an illegitimate effort to remove the president.

Barr has repeatedly cited the fact that the FBI continued to rely on the Steele dossier after the former MI6 agent’s primary sub-source contradicted information in the dossier in January 2017 and March 2017 — and failed to tell the FISA court about the problems with the repudiated evidence.

“The dossier pretty much collapsed at that point — and yet they continued to use it as a basis for pursuing this counterintelligence investigation,” Barr noted this past weekend.

The attorney general suggested such behavior supports arguments that what was really going on was an attempted coup to remove Trump from office. “It is the closest we have come to an organized effort to push a president out of office,” he said.

It was a coup d’etat on American soil, organized initially by one sitting President to take out his successor. That’s what it was, and the Attorney General of the United States understands that fact.

As I keep saying, these Antifa/BLM agitators are a tiny minority of our country and do not have the power to tear it apart. However, a failure by Barr and Durham to bring any of the coup plotters to justice actually could cause that to happen. Because once we lose all faith in the American system of justice – and we are right on the verge of that taking place thanks to Obama’s utter corruption of our institutions – then the country will have lost its very foundation.

Time is getting very short before the November election, Mr. Barr. If you have crimes to prosecute, best get started now. Because if Joe Biden wins the election, all of Durham’s work will be torn into a million pieces and scattered to the winds.

Time for Obama to hang for his Treason… The rest will fall in line.

Will Dr Fraudi finally make enough off of all the vaccine patents?
Will the Karl Marx statue remain in Seattle?
Are the commiecrats or CPUSA in love with China?
Will the comrades find out what real oppression is under the new Chinese utopian management?
Will they just love the wet market and redistribute some of their own pets (cats and dogs) for the good of the collective?
Forward! Yes we can.

Here is where I see where Barr is going:

Barr has only one old dog (called Obamagate) living in his house with but months to live (like until Jan 20, 2021). Barr nurtures the dog because Barr loves the dog.

Barr wakes up one morning a sees a pile of dog schiff on the floor. What does he do? He scolds the dog and tells the Vet (media) about the poor behavior and vows to get to the bottom of this. He hires a couple of dog walkers and dog sitters to ‘investigate’ the reason why the dog is making messes in Barr’s DOJ (dog) house.

The dog is intractable and continues to take schiffs all over the place then Barr has to clean up or ignore it while still ‘looking to get to the bottom of it’. He continues to do both until the dog dies on January 20, 2021.

Problem solved, and Barr retires and leaves town very quietly. The new AG moves into the house, quietly cleans up the schiff and buries the dog.

Problem solved and we all return to “normal”.

I hope thats wrong too… but no confidence in the hope that Barr realizes the dog is terminal and its best for the dog and the country to put it down.

OMG David. Yesterday, I wrote that Barr must start indicting the major players in the coup against Trump now because if not, he’s all talk and the left has won. I believe with all my heart that he can’t wait. I decided against posting it because I figured so many here would once again say Barr is working behind the scenes towards that goal and to just be patient. Well I think we can no longer afford to wait and see what Barr does because before we know it, the election will be here.

Do you have a years worth of cash, food and precious metals? Every concerned American should. Work towards that goal. BE READY for whatever may arise.

Ladyjane your’s isn’t the only voice here to criticize Barrs inaction. Myself and others have ranted and pondered about the possible reasons for this inaction. I personally don’t think Barr is there to prosecute but to mitigate, slooooow walk until Nov at minimum. If Dems steal the election then it all disappears and if Trump wins… it;ll be the same old same old. Tough soft talk’n winnie the pooh will assure everyone justice is coming but grinds slow.

If nothing is done before Nov then you know swamp critter Barr isn’t on the nations team he’s on the political team try’n to preserve the swamp as best as possible. And like Mr Blackmon stated… faith in the ‘Justice’ system will have all but been destroyed. What follows… depends on the actions the govt takes against the people.

Its a war… prepare for such.

“soft talk’n winnie the pooh” Everyone but you knows Winnie the Pooh is Chairman Xi.

Attorney General Barr has a choice: he can be like former CIA Director Woolsey and say that prosecutions “aren’t his way,” or he can prosecute in order to prevent future abuse of the legal system in favor of those who politically criminalize the innocent, as Comey et al..

Up to him. Woolsey has painted himself as villain in history, and deserves the condemnation. Hopefully, Attorney General Barr does NOT want to be remembered that way, as a perpetrator and perpetuator of injustice.