This just came across the wires – will have an update later in the day.

A three-judge panel on the D.C. Circuit Court of Appeals approved Flynn’s petition to intervene in the case after a district court judge had tapped an outside counsel to argue against the DOJ’s move.

Here is the text of the order from the 2-1 decision by the 3-judge panel:

“ORDERED that Flynn’s petition for a writ of mandamus be granted in part; the District Court is directed to grant the government’s Rule 48(a) motion to dismiss; and the District Court’s order appointing an amicus is hereby vacated as moot, in accordance with the opinion of the court filed herein this date,” the U.S. Court of Appeals for the District of Columbia ruled on Wednesday. 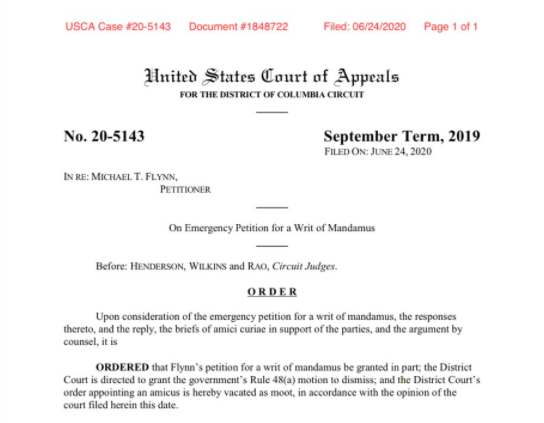 Then there’s this… – New notes taken by Peter Strzok on January 4, 2017 have just been made public, and they directly implicate both Biden and Obama in the framing of Flynn:

Thoroughly delighted to see the order. Cause for celebration!

But now it’s time to free someone who President Trump claimed would have a “very good June.” I suspect that this is the time when he can do that, and Roger Stone can go free, too. It was all shit from the same bucket which was used to smear the two men, and others.

Judge Sullivan is known for having his clerks to most of his work – according to some. That’s not unusual, as this also applies to the SCOTUS justices. I think some of the Conservative justices, particularly Thomas, do their own work.

Roberts’ claim that the judges aren’t Dems or Repubs is probably accurate, since so many “Republicans” can hardly be identified as Republican. Uniparty system.

But there are distinct differences between those who honor the Constitution and those who think we ought to be using other narratives from other nations in order to mete justice; Ginsberg is one of those creatures who does not honor the Constitution. She might as well use the Vulcan system, since she resembles T’Pau – (minus the wisdom and regal bearing.)

Sydney Powell may now proceed to sue the perps for their eye teeth. Start with the little fish. Get affidavits incriminating the bigger fish. Walk it all the way up to Obozo hisownself. Should net fifty million split with General Flynn.

We are NOWHERE near out of the woods regarding a few handfuls of issues that could destroy our great nation. This decision by the courts gives me some hope, even though I’ve been let down many times before. Is the idea of “America” going to survive? Let’s hope so. Time to move on to the next issue of corruption. When all is said and done, if Mt. Rushmore still exists, we need to have a conversation about adding another face.

Could be the browser. I had been using firefox, started having issues so I switched to opera. Problems went away.

Why do I get different content for this blog on different computers? Home computer includes the new exculpatory info at end of blog but work computer and iPhone do not show that part of the blog?

If he goes on the talk show circuit as a sitting judge it may compromise him for future cases. More so than he is now.

I think Sullivan is so deeply invested in the coup that he’ll want to see himself as a martyr. If that means getting removed due to a tell all on the communist propaganda outlets, he and the communists, will all celebrate it as a victory and showcase it as !!PROOF!!, at just how bad those evil conservatives are… After all like Nazi Pelousy said Repubs are trying to get away with murder…

Sulivan has only two choices…

Defy the appeals court ruling and push to a higher court, or go ahead with his sentencing. Either of which will likely force him off the bench. So to the left he’ll be a martyr and to the right he’ll be what everyone knows him to be, a TDS activist gone down in flames.

If he dismisses Flynn as instructed, he’ll give a grand departing speech decrying the ‘injustices’ of him being denied his authority for purely political reasons and because hes black, of course. He’ll attack Flynn, again, and of course Trump because Orange Man Bad, and… then go all all the communist talk shows wailing about how terrible the ordeal was, terrible I tell ya…

Its a…. drama show

If Sullivan defies the appeals court’s order and the Chief Justice doesn’t intervene and overrule AND remove Sullivan, he will have rendered all the courts irrelevant and give the president the cover to ignore any and all current and future rulings, like ‘the One’ and other Democratic presidents and governors have often done over the years when decisions were rendered they didn’t like.

Let it go Emmitt, your 15 minutes of shame in the liberal pantheon of leftist stars is OVER.

Let me guess, the dissenter in the 2-1 decision is a Clinton or Obama judge. Yet Roberts says there are no partisan judges – sure, right, yeah, ok, and I’ve got some oceanfront property in Arizona to sell.

You keep fogetting the lollipop trees!

Now watch Powell be set loose onto the scums that brought all this grief. Gonna need a lot more popcorn. The rats are gonna be in full panic scurry and hide mode now…