Conservative columnist Kurt Schlichter has a thread on Twitter today that everyone should read and digest. His message is simple: While the corrupt news media wants you to believe that the entire country is disintegrating around your ears, the truth is that the social unrest and monument toppling is taking place in isolated areas of big cities run exclusively by Democrats.

They want you to make emotion-driven moves that will help them win.

Pulling down statues in leftist cities that refuse to maintain order is an attempt to psyche you into thinking everything is out of control.

A couple hundred people in Frisco? The local cops were ordered to let it happen. Same with DC. What is this. 3/

So you think “Why isn’t Trump doing something?” But it’s a few hundred bums out of 330 million. And local cities could turn it off in a heartbeat – but refuse to.

To convince you, the law and order types, that Trump is allowing mass chaos. But it’s not mass by any standard.
Nor is it chaos, aside the local  Democrats who are actively facilitating it and making sure no one is actually getting hurt (except dummies that the statues fall on) 5/

What would you have Trump do?Have him do a dirty, violent job the locals refuse to? Send soldiers in and risk real violence – which plays against him?

It’s infuriating – and it’s meant to be – but Trump’s right not to take the bait. 6/

The answer is to let the left cities have their performance art fun. Let them trash themselves. Understand how it’s meant to manipulate you. If they leave Dem areas, unleash the local cops.

Do not do what the enemy wants! 7/

Be woke to the enemy’s game plan. Support the President. Do not be suckered – he isn’t!

Watch him use the DoJ! Buy guns and ammunition for legitimate deterrence & lawful self-defense.

Vote GOP down the line – better yet, campaign! 8/

Here’s a longer discussion of this transparent info operation. 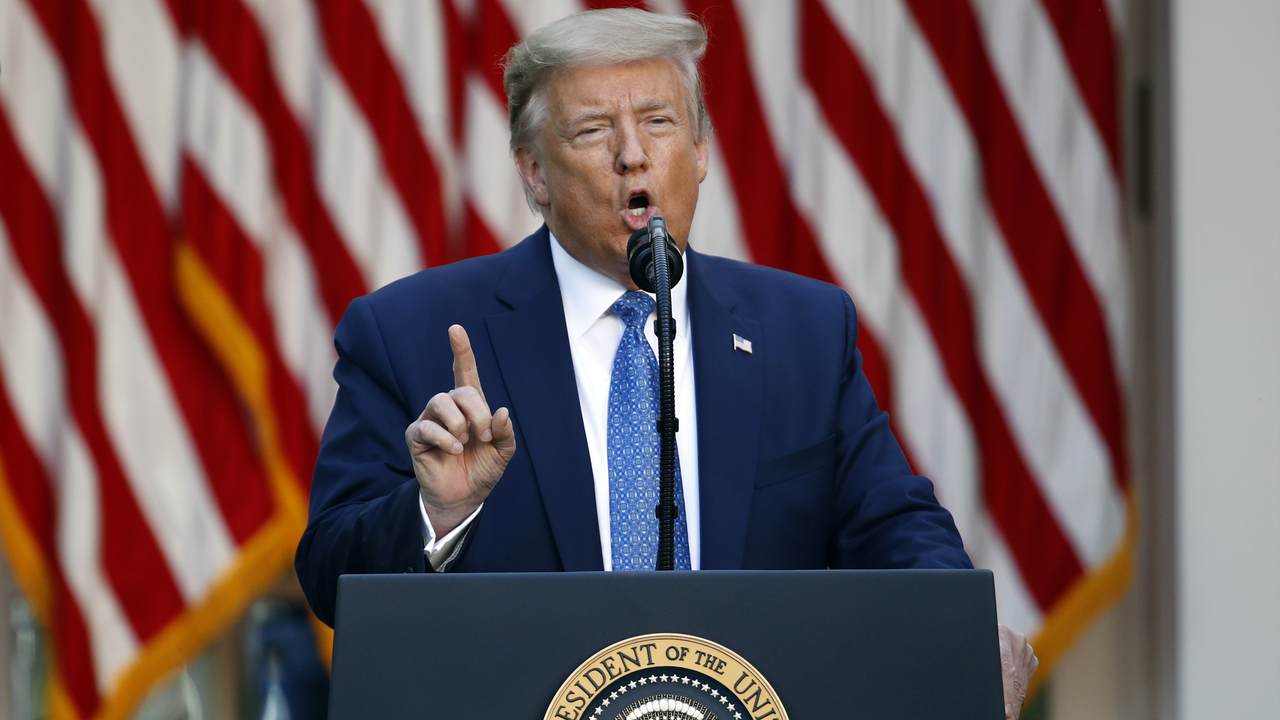 This Leftist Tantrum Is an Information Operation and Trump Is Winning ItIt’s certainly frustrating to watch a pack of reeking leftist scumbags declare a portion of an American city an “autonomous zone” – what is it with Democrats and their secessionhttps://townhall.com/columnists/kurtschlichter/2020/06/18/this-leftist-tantrum-is-an-information-operation-and-trump-is-winning-it-n2570782

I know it feels like we are losing right now. We are not.

They want you mad. Don’t let your emotions control you.

[Thanks for the attention the thread has received]

Ask yourself – have you heard the name “George Floyd” lately, especially in connection with the couple of Dem cities where statues were pulled?

It went from protests people did not think were illegitimate (which the bad actors exploited) to violence with no arguably legitimate cause.

The Dems try to exploit the Antifa types as storm troopers, but their control of the radicals is limited. 11/

Remember, Democrats really only want a return to the status quo (minus us normal people having rights and the ability to again disrupt the status quo). But their radical cat’s paws want revolution.

The radicals are over their skis past what normal people consider legitimate protests.

Dems are content with the chaos for now, since it causes us to think Trump is out of control, but they worry the radicals will tire of meaningless Dem city antics and threaten the suburbs. 13/

The second those whiny white wine women feel themselves or their families physically or economically threatened, they will turn to the strong horse – Trump, and law + order.

Biden is a hapless tool who can’t/won’t protect them.

Their husbands are already there. 14/

1 – Identify himself with law + order

The Dems win if we panic and capitulate before their radical partners radically overstep. And being radical is what radicals do.

Don’t panic. Don’t let the media – which is all in with the left – manipulate you.

Get prepared and get woke. 16/

Want a quick sanity check? Look out your window. Unless you overlook Golden Gate Park in Scat Francisco, the Atlanta Wendy’s or that DC square, there’s no chaos outside.

It’s all a show designed to scare you away from Trump and into the gropey embrace of Puppet Joe! 17/

Now, it can be hard for ordinary folks out here in flyover country to keep all of this stuff in perspective when we are being subjected to yet another massive brainwashing effort by the nation’s corrupt news media in collusion with the Democrat Party. But that’s exactly what Schlichter does for you with this thread.

What he says is undeniably true: Outside of these Democrat-run cities, life in America is by and large going on as usual. My wife and I drove 30 miles through the DFW Metroplex yesterday to have dinner with some family at a fine Dallas restaurant. Traffic was normal – which in DFW means heavy – the malls and shopping centers were filled with customers, and the diverse crowd at the restaurant were all in a good mood, interacting with the staff and with one another in the normal Texas way.

The local news this morning tells me that there was a modest demonstration taking place in nearby downtown Dallas, but we neither saw nor heard any of it. Meanwhile, the rioting and unrest continued in leftist Democrat cities like Portland, Washington, DC and Atlanta, but again, 99% of people in those cities were unimpacted by them.

The Democrats and their corrupt media toadies want you to believe that the country is falling apart and that it’s all Trump’s fault so that they can convince you to vote for a frail, elderly man that you can plainly see is very likely in the early stages of some form of dementia. Actually, maybe not-so-early stages. Convincing you that Joe Biden, a wholly-owned subsidiary of the ChiCom government and serial fondler of women and their daughters at public events, is the only thing standing between you and societal destruction is literally the only hope the Democrats have of winning this election.

The country is not falling apart, but it will fall apart if we put the same people who have overseen the staged riots and looting and burning of large swaths of major cities over the past month in charge of the federal government. The truth is that Donald J. Trump is the only thing standing between you and that disastrous outcome.

Excellent points about how small the crowds actually rioting are in certain sections of the blue cities.

Bet there are more PEACEFUL and HAPPY pro Trumpers in Tulsa today/tonight than there are PAID Antifa and BLM VIOLENT MALCONTENTS total in all the blue cities combined.

Would love to see the actual numbers in attendance at the Trump Rally in ONE mid sized city vs Antifa/BLM riots everywhere else.

[email protected] Phineas. That made my head hurt. 🙂 Good read though.

I’m in the belly of the beast – Studio City, CA. Heard – did not see – that there were some BLM in Van Nuys yesterday, but that is all.

More & more people walking around without masks too.

A week or so ago there was a relatively small demonstration in Montgomery Alabama, two or three hundred folks. For the most part it was peaceful although a couple of ATM’s were trashed. The police had blocked off the main shopping mall the demonstrators went for and it all came to nothing. Since then Nada. The author is absolutely right, keep you wits about you and don’t over react.

The converse also applies to what the DOJ is doing: more is going on, even if you don’t see the bells and whistles. The firing of the prosecutor is a shadow of what’s going on, but just a shadow.

Wonder, for example, how the Weiner laptop remains secret, not discussed (Sidney Powell did talk a bit about it, and her comments were, to say the least, extremely impressive.) Cops saw the video, too, and this may be one more reason to attack the NYPD and make them resign en masse. Enough suicides among them to consider that maybe those who saw the video in one of the files were so traumatized they couldn’t handle it anymore?

But the author is exactly right: the Left has always used the mammalian technique of puffing up to make themselves look much larger and more threatening than they actually are, to keep bigger animals from taking them down. Even non-mammals, like toads, do the same thing. These fools are more akin to puffer fish.

As far as Barr is concerned: he wants the press to stay asleep so that he can operate freely and effectively. The exact opposite of a puffer fish. Except Lindsey Graham.

Eff that blue slip. The dems from NY will do their best to hose it up.

Thanks for sharing that Dave. I had brief moment of angst earlier this week and gave it up to God.
Kurt’s tweets are the truth and just what the doctor ordered. The wife and I went to Beaverton, which is a suburb of Portland. All was calm, folks being folks, and no disruption anywhere.

It’s all happening in the downtown cores, for the most part. And the media is amplifying the noise and violence.

We all must, as Kurt and you have pointed out, keep calm, remember the source and be prepared should things really go sideways and the imbeciles start showing up in our neighborhoods.