Boom, again. – This afternoon, AG William Barr sent a scalding letter to SDNY U.S. Attorney Geoffrey Berman, notifying him that, since he refused to gracefully resign when given a chance, he is fired. Here’s the letter: 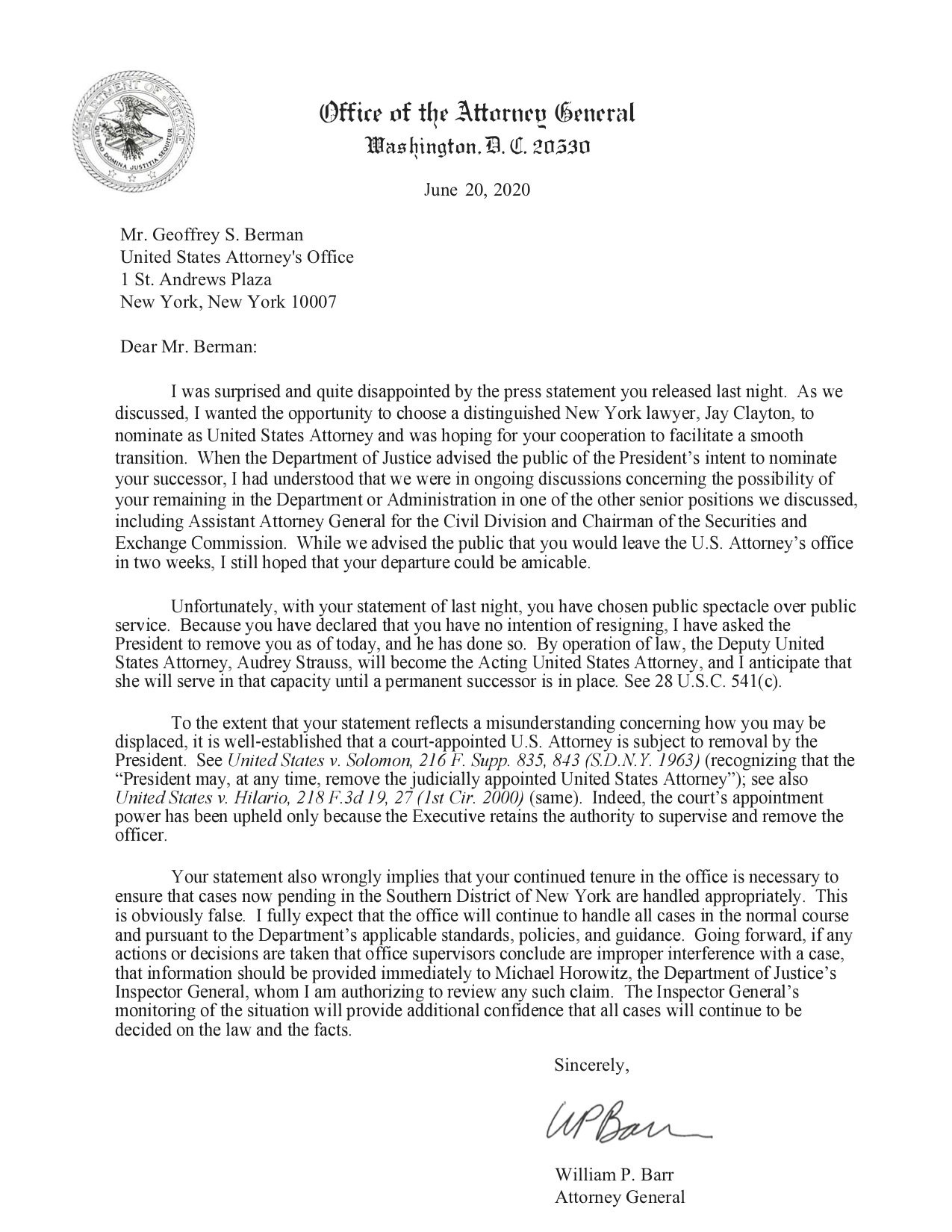 In case you can’t see the photo properly, here is the text:

I was surprised and quite disappointed by the press statement you released last night. As we discussed, I wanted the opportunity to choose a distinguished New York lawyer, Jay Clayton, to nominate as United States Attorney and was hoping for your cooperation to facilitate a smooth transition. When the Department of Justice advised the public of the President’s intent to nominate your successor, I had understood that we were in ongoing discussions concerning the possibility of your remaining in the Department or Administration in one of the other senior positions we discussed, including Assistant Attorney General for the Civil Division and Chairman of the Securities and Exchange Commission. While we advised the public that you would leave the U.S. Attorney’s office in two weeks, I still hoped that your departure could be amicable.

Unfortunately, with your statement of last night, you have chosen public spectacle over public service. Because you have declared that you have no intention of resigning, I have asked the President to remove you as of today, and he has done so. By operation of law, the Deputy United States Attorney, Audrey Strauss, will become the Acting United States Attorney, and I anticipate that she will serve in that capacity until a permanent successor is in place. See 28 U.S.C. 541(c).

To the extent that your statement reflects a misunderstanding concerning how you may be displaced, it is well-established that a court-appointed U.S. Attorney is subject to removal by the President. See United States v. Solomon, 216 F. Supp. 835, 843 (S.D.N.Y. 1963) (recognizing that the “President may, at any time, remove the judicially appointed United States Attorney”); see also United States v. Hilario, 218 F.3d 19, 27 (1st Cir. 2000) (same). Indeed, the court’s appointment power has been upheld only because the Executive retains the authority to supervise and remove the officer.

Your statement also wrongly implies that your continued tenure in the office is necessary to ensure that cases now pending in the Southern District of New York are handled appropriately. This is obviously false. I fully expect that the office will continue to handle all cases in the normal course and pursuant to the Department’s applicable standards, policies, and guidance. Going forward, if any actions or decisions are taken that office supervisors conclude are improper interference with a case, that information should be provided immediately to Michael Horowitz, the Department of Justice’s Inspector General, whom I am authorizing to review any such claim. The Inspector General’s monitoring of the situation will provide additional confidence that all cases will continue to be decided on the law and the facts.

Can’t wait for the next shoe to drop in this one.

Is the deputy now in charge just as bad? Jay.

Berman praised her, but that may be like Jillian “the Hysterical” Brennan praising Little Miss Muffett at the Agency, which would be to sow distrust. While she (Little Miss Muffett) seems to be sitting on her Kurds and Wray, it’s not just one spider she’s got to deal with. Considering the mess Jillian left her at the Agency, it’s amazing she’s still in place at all.

Not sure. I am assuming Barresee what com did his due diligencenbefore assigbing her. We can do a Duck Duck Go on her and see what comes up.

I am sorry, I should never use my cellphone to make posts. It should be due diligence before assigning her.

Could the deputy who will be running things there be just as bad?

OK, not a follower of Q but for some reason I decide to pop into QAnon Post & Drops and on the top of 4484 I read this and my hair stood n end:

I’m a little more than a casual observer of Q, because they are relevant (not “he,” they)

You picked a good Q drop to post. Entirely relevant.

As I had stated in the response to the Schlichter commentary, the Weiner laptop is the reason why the Berman firing was necessary. But as Q adds, there’s even more to that story: Clinton Foundation and Epstein being a big part of it. Didn’t know Ukraine was tied into this particular jurisdiction, but I’m not surprised.

Their admonition to “watch NYC” has been relevant, including for the Plandemic.

Gone for the day till later this evening – y’all have a Blessed Sunday!

Sally Yates pulled the same kind of crap. Didn’t work, but it did expose some of the criminals involved in the coup – they cheered her on in her rebellion, as if they wouldn’t expose themselves.

I suspect that Berman was either impeding the Durham investigation in some way or chasing rabbits in hopes of doing the job that Mueller failed to do and Barr found out about it.

Great, finally some real meat! And to think that clown was offered to be retained by the Trump and the DOJ?

Talking about cutting one’s nose off to spite his face…, and overplaying a bad hand.

I hope and pray beginning November 4, this happens hundreds if not thousands of times all over the country, and all this ‘investigations’ schiff is concluded and indictments happen prior to the start of President Trump’s second term on Jan 20, 2021.

If what I wish for comes to pass, great things will happen when Trump wins in a landslide, gets the House back with real leadership, gains a couple of seats in the senate, and tells Roberts to (figuratively) go to hell like ‘the One’ often did, then watch America really take off to and for everyone’s benefit.

Then the President can really start to clean house, starting with the CDC, FBI, the IC (hopefully with Gen. Flynn), and the Pentagon.

We don’t slap back, we punch. It’s about time Barr caught on to what’s happening here. As for Graham, the sooner he is in the grave with McCain, the better.

Now he is free to write a book and get a job at MSNBC….see ya!!!