UPDATE: At 7:00 a.m. CT, Fox News is now reporting that the President has ordered 1,700 National Guard troops to deploy to Minneapolis.

Boy, that curfew sure worked out, huh? – Despite an 8:00 “curfew” declared by feckless Democrat Gov. Tim Walz, Antifa/BLM agitators and thugs continued burning down Ilhan Omar’s congressional district in the Minneapolis/St. Paul area Friday night and well into Saturday morning.

The mass rioting seen on Wednesday and Thursday started right up again as darkness dawned Friday evening, just a few hours after CNN’s dimwit Chris Cillizza had published an “analysis” piece titled “The governor of Minnesota just showed what leadership in a crisis looks like.” Of course, Cillizza’s “analysis” was focused on the police arrest of CNN’s reporter and camera crew Thursday. Walz apologized for that action despite the fact that it was entirely justified after the CNN reporter had spent several minutes arguing with the cops and obstructing their sight lines during a violent emergency.

How are the police supposed to control anything when a despicable alarmist operation like CNN is having its crews intentionally get in the way so they can make the story about themselves, and with a Governor who is subservient to them? This isn’t ‘leadership,’ it’s surrender.

A block away people are breaking into ATMs pic.twitter.com/Eeosg1FZ2z

Last night, Gov. Walz whined that he just doesn’t have enough law enforcement officers on the job for them to begin making mass arrests. That provides President Trump with his window of opportunity to take over this situation, call in the National Guard, and clean up the mess made by Walz and pathetic Minneapolis Mayor Jacob Frey.

Given that Minnesota’s mess is now spreading to other cities across the nation, today would be a very good time to take that action.

Frey and Walz, being leftist Democrats, want to continue treating these rioters as Democrats always do: As misbehaving children who are just acting out and need to be protected by the government. That is obviously not what is taking place here. The truth is, as many residents are now saying, that these cities have been invaded by paid Antifa and BLM thugs who are fomenting these riots and committing most of the violence and destruction.

America was right to react with utter outrage at the callous killing of George Floyd by those four police officers. Now it is time for America to be outraged at the ongoing mayhem being created by these thugs. They are a cancer on our society and they need to be cut out.

Frey and Walz are obviously completely helpless and useless. I am generally not in favor of federal intervention into local affairs, but this outbreak has now gone national. This city needs to be locked down, and only the federal government can get that done.

In that regard, the AP is reporting that the Pentagon has placed several military units on alert to possibly be deployed to Minneapolis:

The get-ready orders were sent verbally on Friday, after President Donald Trump asked Defense Secretary Mark Esper for military options to help quell the unrest in Minneapolis after protests descended into looting and arson in some parts of the city.

Trump made the request on a phone call from the Oval Office on Thursday night that included Esper, National Security Advisor Robert O’ Brien and several others. The president asked Esper for rapid deployment options if the Minneapolis protests continued to spiral out of control, according to one of the people, a senior Pentagon official who was on the call. 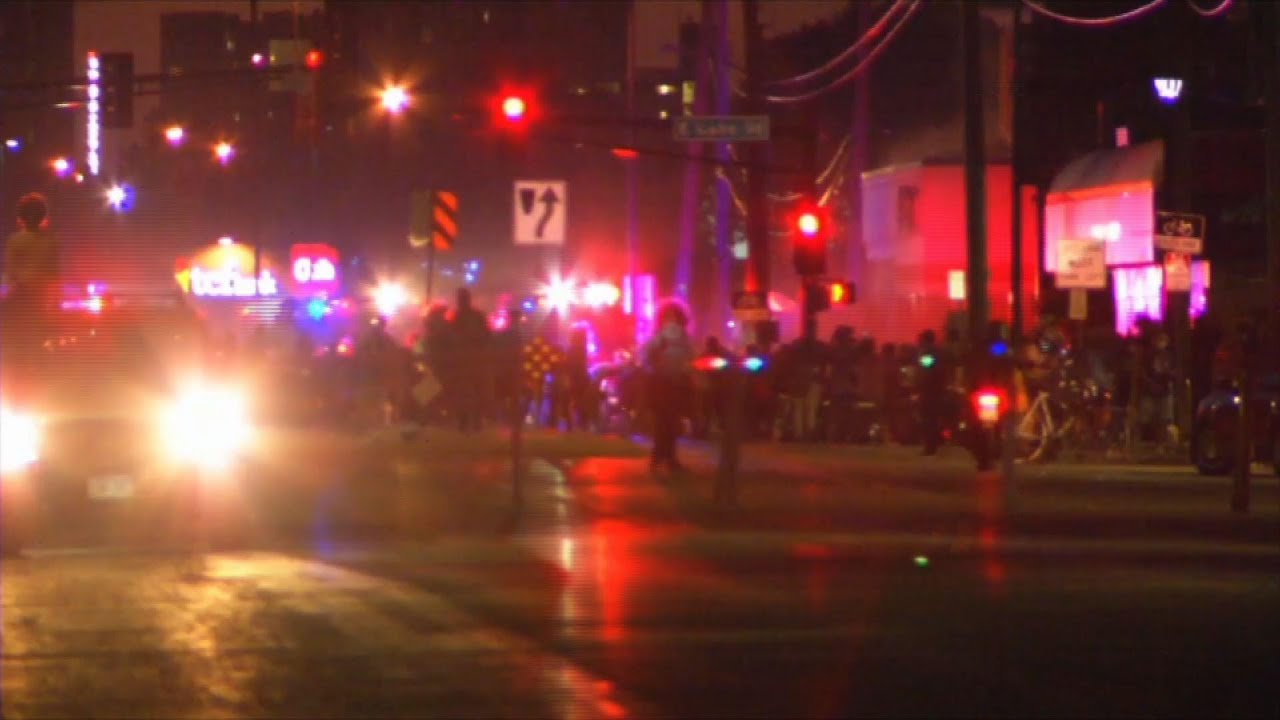 ”When the White House asks for options, someone opens the drawer and pulls them out so to speak.” the official said.

The person said the military units would be deployed under the Insurrection Act of 1807, which was last used in 1992 during the riots in Los Angeles that followed the Rodney King trial.

It is becoming obvious that the rumors that have been running around for several months of the Democrats planning to try to start a race war in our country this summer were accurate. All they were apparently waiting for was a touch point to set it off, and the killing of Mr. Floyd served that purpose.

Everyone needs to remember, as you watch all of the ugly scenes across the country, that both BLM and Antifa are domestic terror groups created and funded by the Democrat Party through dozens of George Soros-backed front groups. None of what you see happening on your TV screens is organic in nature. This is an entirely planned set of events designed to create chaos in our country leading up to a national election.

This is why you see reports like this one from Max Nesterak, a local journalist who has taken great personal risk to report these events in real time:

I spoke to Sharone next to the burning gas station. He says white outsiders are destroying his neighborhood pic.twitter.com/qrPUBA7Vpj

Who do you think those “white outsiders” are? Remember that Antifa is made up mainly of white, middle-to-upper-class Millennials who live in their grandmothers’ basements.

You were all outraged this week by the video of the callous killing of George Floyd. Now it is time for you all to be outraged at the Democrat front groups who are causing all of this mayhem and destruction in the name of politics.

I stated in the other article written by Mr Schweikart that this will be only the beginning of the race baiting ‘protests’ that will be fanned for all their worth by media and demoncraps. These are cornered animals and its all they have left to try and oust Trump. Expect it to get much worse.

With Trump sending in the NGuard to quell and arrest the agitators is completely the right thing to do. Its not even well disguised that its the anifa and blm paid agitators doing this destruction. The NGuard needs to surround them and not let one escape, interrogate them, and go after the ones paying them, charging them with sedition. Helllloooo Gina…Soros, Gates etc..

Unless reigned in the evil dirtballs will throw even more money at it. Soros has very little time left using oxygen he doesn’t deserve and he sorely wants to see America fail. He really needs to spend his last days in a very small simple cell with nothing but his thoughts until his last breath. On that last exhale…. is when his real punishment for his evil ways be finally be meted out in full measure.

So Mr Trump… If Mr Barr isn’t to busy giving soft tone meetings about the ‘travesty’ perhaps he can do a little work by investigating the financiers of these riots and bring them to trial. Unless of course they were also financing the coup then it would be understandable why they’d get a pass… like Comey. McLame etc

House-to-house fighting: that was one of the values of the War in Iraq. Up until then, we knew that this was a soft spot (“we” as in the military.) Operations are so much cleaner now, compared to other times, and it’s become routine. We learned a lot from the ’68 Convention and Kent State, which were an indictment of leaderless government and military. General Schwarzkopf changed a lot of that, in the First Gulf War, even before the War in Iraq, but the test-ground was really in the second event. The CIA did a fantastic job of softening Afghanistan in the runup to that war.

Experience counts. You’re completely right about rounding up ANTIFA and other paid terrorists. They have the training and techniques, as long as the CIA doesn’t interfere on behalf of Soros.

Soros should be held, along with the heads of his organizations. The fact that he’s not an American, and he should have his citizenship revoked and face a military tribunal, outside the US courts.

But we all know that won’t happen, don’t we? Because he’s a CIA asset, and is being protected as an asset. No other reason he’s been so protected from official inquiry.

Notice that there were three parties in Ukraine being investigated, before Shokin was fired? Not just Burisma, not just Hunter Biden. But you never hear of the third, which is Soros’ organization. The press has kept his organization completely out of it. QuidPro wasn’t just protecting his son, but Soros. CIA asset Soros..

Where is Little Miss Muffett these days? Hiding on her tuffet? Is she cooperating with the Spider, instead of running away? What are you hiding, Miss Muffet? Are the assets you’re hiding actually the Spider itself? Have you ever seen the movie “Meet Joe Black?” Miss Muffet, you are going to be in the spotlight soon.

The “white outsiders” generally come in busses (I know, I know, I said that already, ad nauseum.)

But maybe we can let other protestors burn those busses? No way back to mommy’s basement?

Cities which have allowed or fomented unrest should be put into receivership, as practiced in D.C. when it couldn’t manage its obligations.

Violent rioters (and people breaking curfew?) should be detained by the National Guard, put in detention and refused any new stimulus checks or funds.

Cities which have abandoned law and order should be forced to pay reparations to the businesses they allowed to be destroyed, or have matching amounts deducted from their federal funds.

Masks in those areas should be disallowed, as they aren’t essential anyway, do nothing, and protect the identity of rioters. Exceptions for 1st responders and healthcare workers.