If this surprises you, you haven’t been paying attention. – Federal Judge Emmet Sullivan, under fire for his bizarre conduct of the case involving the framing of General Mike Flynn, will not be filing his own response to the DC Circuit Court of Appeals’ order for him to explain himself by Friday. Instead, the Washington Post reports that he has taken the extraordinary step of hiring “a high-profile lawyer” to do that for him:

The federal judge who refused a Justice Department request to immediately drop the prosecution of former Trump adviser Michael Flynn has hired a high-profile trial lawyer to argue his reasons for investigating whether dismissing the case is legally or ethically appropriate.

In a rare step that adds to this criminal case’s already unusual path, U.S. District Judge Emmet G. Sullivan has retained Beth Wilkinson to represent him in defending his decision to a federal appeals court in Washington, according to a person familiar with the hire who spoke on the condition of anonymity because of the sensitivity of the matter. The U.S. District Court of Appeals for the District of Columbia Circuit is now examining the judge’s actions and the larger case against Flynn after lawyers for President Trump’s former national security adviser asked the court to force Sullivan to toss Flynn’s guilty plea.

Wilkinson, known for her top-notch legal skills and get-results style, is expected to file a notice with the court in the coming week about representing the judge. She declined to comment when reached Friday evening. Sullivan also declined to comment through his office.

Don’t you just love the phrasing? “high-profile”; “top-notch legal skills”; “get-results style;” the pathetic Post reporter must have just done a cut-and-paste from Wilkinson’s marketing flyer, which no doubt was stapled to the handy talking points memo that came in from the DNC.

So, what does this tell us? It tells us that Judge Sullivan is worried, very worried. The order from the DC Circuit demanded a response personally from him, not some “high-profile lawyer” with a “get-results style.” It also tells us that the judge who refused to allow the DOJ’s motion to dismiss the case is not confident that he is capable of explaining his own actions. Amazing.

The Post story indicates that Wilkinson plans to file a notice to the court that she will be doing the responding on the judge’s behalf, something the Circuit Court has no obligation to allow. This will be another very interesting week in the Soviet-style show trial of General Flynn.

“None of the men are wearing masks.” – President Donald Trump (I never tire of typing those three glorious words) drove the corrupt news media nuts once again on Saturday, simply by playing his first round of golf since early March. The automatonic ghouls at CNN and MSNBC tut-tutted about it all day long, obsessing over the fact that, while spending four hours in the wide open spaces, neither the President nor any of his playing partners and entourage were – gasp! – wearing masks.

Not even Anthony Fauci is confused enough to pretend that wearing a mask would serve any productive purpose in that setting, and you can be certain that none of the TV talking heads, cooped-up in their enclosed studios with cameramen and production staff, were wearing masks while doing all the tut-tutting and tsk-tsking.

These are the worst people in our society. They truly are. 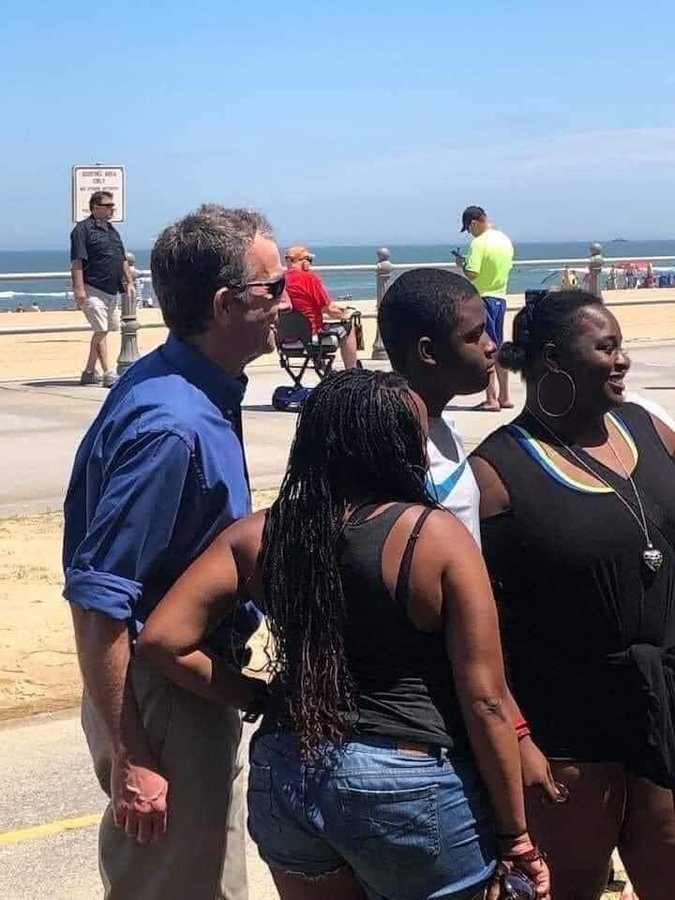 No one at CNN or MSNBC had a word to say about it. Funny how that works.

Living in a Democrat state is hazardous to your health. – No really, it is. Reuters compiled data showing that residents in “blue” areas of the country are three times more likely to die of the Wuhan Virus than residents living in the “red” areas: 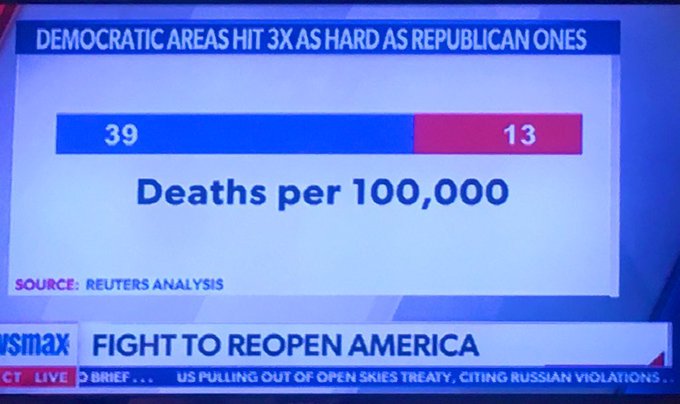 So, come on to Texas and Florida, folks, but when you get here, don’t vote for Democrats.

Speaking of dangerous Democrat governors… – Andrew Cuomo, in his frenzy to misdirect blame for his state’s thousands of nursing home deaths anywhere but in his direction, is now claiming that he issued his order forcing hospitals to send infected elderly patients back to nursing homes based on guidance from the Trump Administration:

This is a completely false claim. No guidance from the federal government or anyone else justified Cuomo’s unconscionable, ghoulish order.

But here are tools supplied by the federal government to New York that Governor Cuomo could have used to avoid sending those infected patients to those nursing homes, where they infected thousands more residents who might otherwise have avoided the virus:

Let’s be crystal clear: Andrew Cuomo and Andrew Cuomo alone is responsible for the needless deaths of thousands of nursing home residents in New York. Period.

How inc***ous our crapitol really is. Sort of like a liberal syndicated NYT columnist who was married to a MA state supreme court justice when she made one of the initial pro gay marriage ‘rulings’ that “forced” (gave political cover to) an 80+% Dem legislature to ‘pass’ a pro gay marriage law fifteen some odd years ago. Don’t remember the names; doesn’t matter – they are all cut from the same bolt of cloth.

“judge” Sullivan’s actions are designed to do one thing: force the president to pardon General Flynn in order to give the MSM (D) a new corruption twist talking point against Trump and his crony Flynn.

Here is what the DC Circuit court should do:

1) Remove Sullivan from the case.
2) Assign the case to their court since Flynn’s lawyer has already appealed to the Circuit court.
3) Dismiss the Case Against Flynn in less than a minute.
4) Schedule an appointment on a date certain but within a week, for Sullivan to appear before the court – super duper lawyer (lawfare lawyer?) Beth Wilkinson may attend – bet the firm is working pro bono as a “friend of the court”. (The whole “legal profession” of the District of Corruption and the NCR needs to be investigated starting with Flynn’s original law firm.) Failure to appear at the time and date specified will result in a contempt of court order against Sullivan and Wilkinson.

There, fixed it for you. All this should be done with in a week and the whole process should take abut five minutes.

PS: If it were possible, the circuit court should rule that Flynn should be allowed to sue “judge” Sullivan.

Also, why does a presumably good lawyer like Sullivan feel the need to commission the services of a high priced, high power lawyer like Wilkinson who can ‘git-it-done’. And why couldn’t he just ask his retired “friend of the court” judge Gleason to represent him? Could it be that Sullivan knows full well that Gleason is a bigger hack than he is and probably not a very good lawyer.

Regarding Cuomo et al, what other CDC “guidelines” did he, and other governors follow? Seems to me that NY and its state’s courts are doing everything possible to muck up Trump’s presidency over the past three years. Where are the “guidelines” on those actions? Hmm governor?

Where are the “Guidelines” that said to put CV-19 patients in the nursing homes; please quote them for us.

By the way, Which Cuomo is the Fredo Cuomo?

What happened to “We’re all in tis together”?

“These are the worst people in our society. They truly are.”

Dave, you were referencing the Media Hacks, and they are terrible people, but I would say every Blue politician beats them for the simple fact that no Hack Propagandist can negatively impact anyone’s life unless we let them irritate us or unless we allow them to determine who we vote for. Whereas, every politician, ‘health’ and SS cop and judge wannabe, has a direct impact on virtually every aspect of our lives, so in that regard, the “public SERVANTS” are far and away the worse people in our society.

I am really tired of hearing even the raspy (nails on a chalkboard) voices of Dr. Demento Fauxi and his girlfriend – the scarf queen, and Andrew the Pious.

Trump has also ordered ALL places of worship to be opened TODAY as he is deeming them “Essential” to a functioning nation.

If pot places, liquor stores and abortion clinics are “Essential” then so are places of worship. AND TO THAT I WOULD ADD EVERY BUSINESS THAT GENERATES TAX REVENUE AND EMPLOYS ANYONE!

Hey DNCNN and PMSDNC! Where is Northam’s mask and how about his SIX feet of “social Distancing”? “Do as I say, not as I do”: The Democratic mantra.

Sullivan’s lawyer no doubt will ask for additional time to become familiar with the matter and prepare a response. This would be done to delay a prompt resolution of issues related to Sullivan’s refusal to follow the law regarding uncontested motions to dismiss a criminal prosecution (a power vested in the Executive Branch), and to allow the so-called “friends of the Court” to file their amicus briefs by June 10. Assuming the DC Circuit allows her to get involved, it should require her to abide by the June 1 date for a response. Secondly, since the DC Circuit ordered Sullivan to response personally, the Court should make clear that a Response signed by counsel is insufficient, unless it is accompanied by a signed Affidavit from Sullivan explaining in detail his conduct in the Flynn matter.