Tired of all this WINNING yet? – The DC Circuit Court of Appeals, in an extremely rare action, ordered corrupt Federal Judge Emmet Sullivan to personally respond to the Court to explain his refusal to grant the DOJ’s motion to dismiss the case against General Mike Flynn, which was filed on May 7: 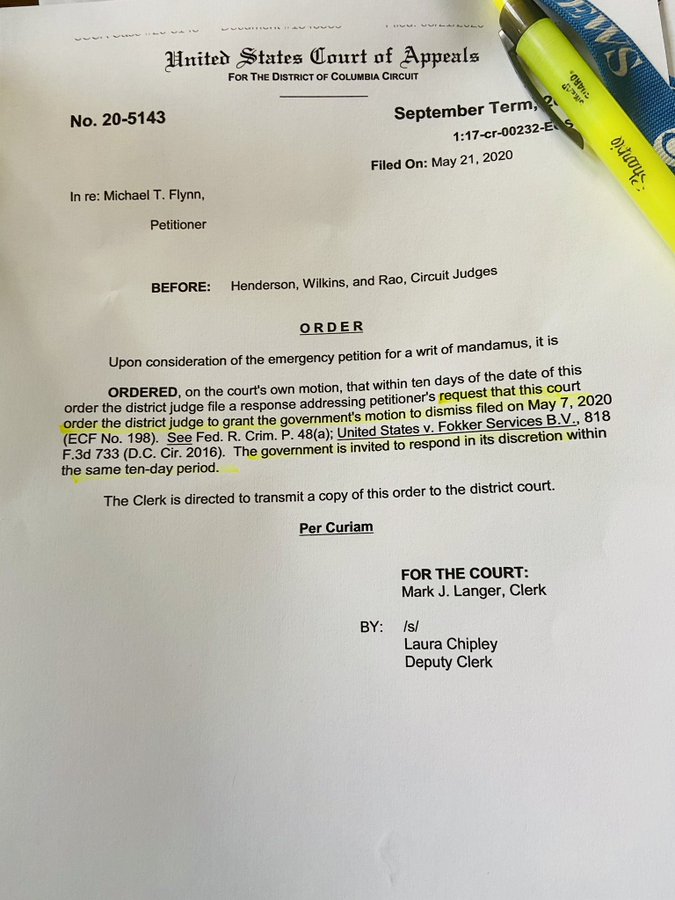 As appellate lawyer John M. Reeves (reeveslawstl) explained in a great thread on Twitter, writs of mandamus like the one Sidney Powell filed on Tuesday are most often rejected outright by a court of appeals. But, when not rejected outright, district judges are generally allowed to respond through  an amicus curae, an outside attorney appointed by the circuit court who would file a response on his behalf. In fact, that is exactly what the appellate court did in the U.S. v. Fokker case cited in this order.

The 3-judge appellate court panel could have also merely “requested” Judge Sullivan to respond; instead, it requires him to file his response within 10 days. This is an extraordinary demand by an appellate court of a district judge who has been on the bench for more than a quarter of a century and who, prior to his gross mismanagement of the Flynn case, had established a firm reputation for adhering to the law.

The 3-judge panel consists of Judge Karen Henderson, a George HW Bush appointee; Judge Robert Wilkins, an Obama appointee; and Judge Neomi Rao, an appointee of Donald Trump. We can be confident that Judge Rao will do the right thing, and that Judge Wilkins will parrot whatever opinion is written for him by a bunch of Lawfare lawyers. Thus, the entire matter will hinge on the judgment of Judge Henderson, who, if the order issued yesterday is any indication, is already highly concerned about Sullivan’s conduct.

And speaking of WINNING… – Staunton, Virginia, is a town that has trended Democrat for more than a decade, one that voted for Barack Hussein Obama His Own Self twice, and went for the Fainting Felon over Donald Trump in the 2016 election. GOP voter turnout has been depressed in recent election cycles, as Republicans have become discouraged, assuming the handwriting was on the wall.

But this week, everything changed. Three city council seats, all held by Democrats for years, were up, and the Republicans, in what one reporter called an outcome that was “stunning beyond words,” took all three seats from Democrats, riding a wave of record turnout. Thus, as the corrupt news media continues to crank out its fake polls – Fox just released another laugher yesterday – pretending to show Biden and the Democrats with substantial leads, the results of elections on the ground keep painting a very different picture.

And even more WINNING! – As we reported yesterday evening, Texas Congressman John Ratcliffe was confirmed by the full Senate yesterday on a party-line, 49-44 vote, to become the full-time Director of National Intelligence.

The courageous Grenell will now resume his job as full-time U.S. Ambassador to Germany. Every American should wish him Godspeed and be thankful for his outstanding work as Acting DNI. He has truly made a difference for the nation.

And hey, President Trump: If you want to make every leftist head in America explode simultaneously, how about firing Christopher Wray and making Mr. Grenell the Acting Director of the utterly corrupt Federal Bureau of Investigation? Wouldn’t that be fun?

Yeah, it really would.

Will this WINNING never end? – Generalissimo Gretchen Whitmer, the aspiring banana republic dictator currently serving as Governor of Michigan, suffered another setback on Thursday when a county judge who, unlike her, has actually read the U.S. Constitution rejected her efforts to deny 77 year-old barber Karl Manke his right to cut hair.

From U.S. News and World Report:

Manke reopened his shop in Owosso on May 4, drawing customers from across the state who were inspired by his plea for freedom from a government shutdown. Gov. Gretchen Whitmer said barber shops and hair salons are risky places because of the contagious virus.

“Listen, I’ve been in this business for 59 years. She wants to come cut my hands off, that’s another story,” Manke said in an interview, referring to the governor. 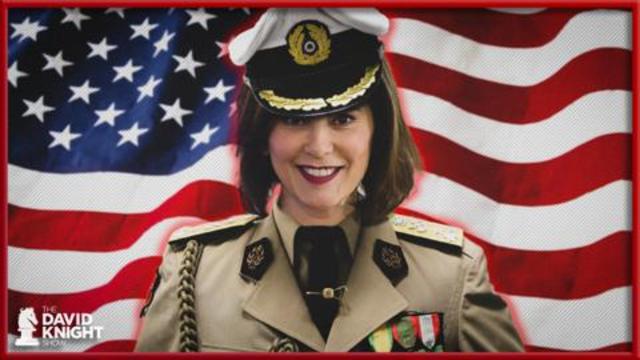 Say what you will about Sen. Klobuchar, but she, unlike the Generalissimo, is actually someone who has qualifications to be president, which is something any Biden running mate would end up becoming within a few weeks after Inauguration Day due to Biden’s obvious, advancing mental decline.

The Biden handlers also leaked on Thursday the fact that they are also vetting Florida Congresswoman Val Demings. Unlike the loooooser, unaccomplished Ms. Abrams, Cong. Demings is an accomplished, serious person with 35 years in law enforcement. She rose from being a patrol officer to ultimately serve as Orlando’s Chief of Police for 10 years prior to being elected to congress in 2016. Yes, she’s a leftist, but at least she is someone who has had experience leading in a crisis.

While a Biden presidency would be an unmitigated disaster for the country in any event, it is somewhat reassuring that his handlers are at least beginning to consider some fairly serious people as his running mate. Don’t get me wrong: They’re all terrible people. But a Whitmer/Abrams level of terrible is a little more dangerous to everyone than Klobuchar/Demings level of terrible would be. 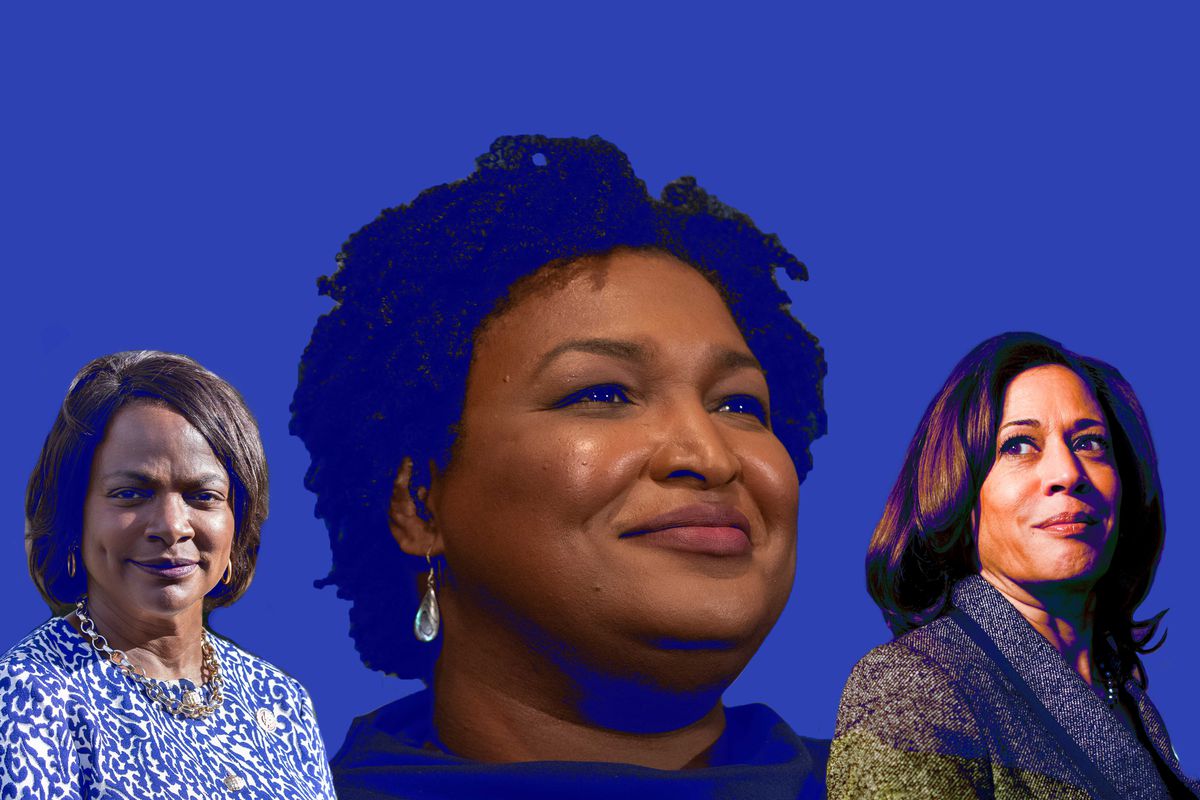 CORNAPANIC LUNACY, Part I – The things we are doing in response to the virus are simply insane, as illustrated by this photo of a beach in La Grande Mont, France:

A woman sunbathes at a beach with roped-off zones for social distancing in La Grande Motte as France eases lockdown measures.

CORNAPANIC LUNACY, Part II – Horse racing is about to restart in Texas, but few will be there to see it. At Lone Star Park in Grand Prairie – which is in Democrat-controlled Dallas County – the bar and sports book, both entirely indoor facilities, will be allowed to admit fans and bettors up to 25% of capacity.

But the grandstand, which is outdoors in the warm sunlight and fresh air, will be kept empty. This despite several recent studies that indicate that warmth and sunlight help to kill the Wuhan Virus.

You just could never in a million years make this stuff up, folks.

Don’t write off Judge Wilkins too quickly. His entire career before becoming a judge was spent defending people accused of crimes. I believe most of that career was in a public defender’s office. The idea that a judge won’t dismiss a case that the prosecutor says should be dismissed is likely to be very disturbing to someone with Judge Wilkins’ background.

not if the fbi has pictures of him

Andy, thanks for that reply. If – IF – Judge Wilkins turns out to be that rare Obama judge who actually follows the law rather than the Democrat narrative, then I commit to you that I will apologize in a blog post. Ok?

It is rather amusing to realize that “La Grande Motte,” the beach pictured above. translates into English as a slang expression meaning “The Big Pudendum.”

What amazes me is the total disconnect these social marxists have. Do they really think that oppressing people within their States is going to engender support for them?!?!?

On another note heres an article on the covid virus. There are many saying its not a manufactured virus. Fauci came out stating emphatically this very thing in support of China. But… as more people are studying this its slowly coming to the surface. or maybe it is just a perfect storm of coincidences… yeah thats gotta be it… China would never be so stupid to initiate a biological attack…

Even if not a biological weapon, it had the effect as such. So maybe they didn’t intentionally release this – but knowing it would spread and not warning the world soon enough and not providing samples of the virus as requested certainly had an impact that would benefit China. That may have been a bonus result China decided was OK while enduring the pandemic.

Our economy took a big hit, there is discord among the states, and we have gone waaaay deeper in debt with the stimulus.

Its very much likely a gambit China was willing to take with an intentional release. They have been working on this, virus, since the opening of their Bio level 4 lab a mere 40 kilometers away, as noted by an Italian science program called Leonardo.

Given that China was being called to the carpet by your President, they were being hit hard economically. Very hard. Notice how during the scamdemic, China, was threatening with holding medical gear and medicines. Trying to force the US into ‘renegotiating’ the deal they signed.

Also consider that travel within China was very restricted during the ‘outbreak’ but international travel was never stopped at all. The idea was to mitigate the harm to their populace while saturating and crippling the populace of other nations entirely. The intention of the virus is not to kill as many as you can, but to cause enough damage to eliminate production and cause the other countries to pour huge resources into combating the virus. Which they succeeded in doing.

Chinas thinking is they hold the bulk of world manufacturing within their borders. Soup to nuts. Their position is that they will recover far faster than every other nation BECAUSE they hold the manufacturing base for much of the world. They will have the conditions more suited to their advantage because if you do not agree to their conditions… find another supplier and good luck. Notice that Xi wanted to ‘renegotiate’ the trade deal he’d just signed while the scamdemic is still having its affect??

Why would China risk killing much of its citizenry?? Simple answer is marxists don’t care a lick about people lives… only control, and money. Tianiman Square, they killed thousands… very little outrage from that. Moa, killed 70 million… marxists world over in the last century have killed 100’s of MILLIONS of people so would a few 10’s or 100K’s of people given them pause?!?? Not likely.

So was this an accident or intentional?? IMO… intentional. If truly an accident is was merely an inconvenience and they had to ramp up because of an early release. Also take into consideration Fauci claiming Trump will face a yet discovered pandemic before it happened. Bill dirtball Gates also stating the same thing, and he’s been openly working WITH the chineese regime for years with his favorite hobbies of vaccines and public surveillance systems.

The perfect storm of coincidences and China is being unfairly singled out… according to the Chinese regime and demoncraps.

Gestapo Gretchen may have lost the case against the barber, but she won a big one over her use of executive authority:

The judge acknowledged she broke the law, but sided with her anyways?? Republicans are appealing, of course.

We need across the board change in MI.