If you want to know what is actually happening in Washington, DC these days, the best first step you can take is to follow the great Catherine Herridge on Twitter. Just before 4:00 CT today, Herridge issued this tweet:

The timing is interesting to me since I had a conversation with a DC contact this morning in which I wondered when Flynn’s great lawyer, Ms. Powell, would take this very action. She apparently wanted to wait until Judge Emmet Sullivan had overplayed his hand so severely that the appeals court would also reveal itself as hopelessly corrupt were it to deny her writ.

It was bad enough that Sullivan took the stunning step last week of appointing a Trump-hating lawyer, John Gleeson, to be a court-appointed amicus curae. But then on Monday, Gleeson filed a motion with Sullivan requesting the ability to set out a briefing schedule demanding new briefs and oral arguments from both the defense and the Department of Justice, and the ability to call witnesses. Gleeson, in other words, is attempting to set himself up as a de facto second special counsel, complete with the ability to perform his own separate investigation targeting General Flynn.

At that point, the situation had obviously become so beyond the pale that Powell literally had no choice but to see this writ of mandamus. In the blown-up copy below, you can see that Powell requests the appellate court to summarily grant the DOJ’s motion to dismiss the case; vacate Sullivan’s order appointing Gleeson; and to reassign the case to a judge who hopefully has a little respect for justice and the law. 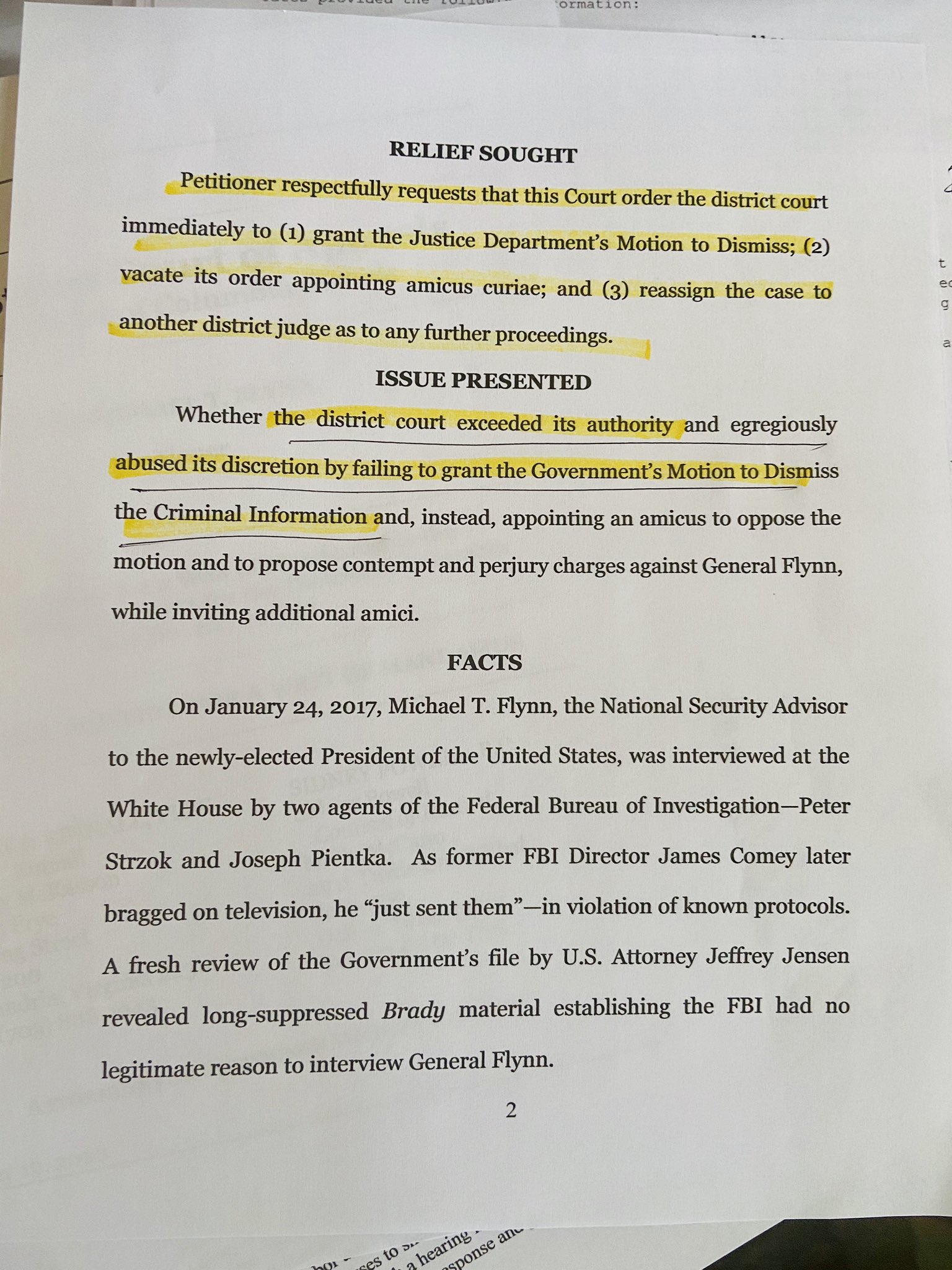 The notion that a judge in a case in which the prosecution has literally filed to abandon all charges would go to such unprecedented lengths to continue a 3 year-long persecution of a defendant who was entrapped and framed by his own government is repugnant to the American experience. It is terribly disturbing that any federal judge would oversee and in fact force such a perversion of our system of justice in his courtroom. This is Stalinist Soviet Union stuff.

The biggest fear we should all have now is the prospect of the Court of Appeals twisting itself into a pretzel to devise a rationale for denying Powell’s petition. Because if that happens, we will know that our federal court system has become hopelessly corrupted, and the situation is irretrievable.

This is a big, big moment in our nation’s history. But hey, better to know it than not, right?

Getting to a point where the only solution is a Deus ex Machina . . .

In light of what has been proven so far it is fairly obvious to anyone who has enough neurons to make a synapse that this judge is a traitor and deserves summary execution. As do many others in our government who have committed this treason.

This whole thing with Flynn is to keep him jammed up so as to keep him from testifying and exposing where the bodies are buried in the IC and/or prevent him from rejoining the Trump Administration should he even want to.

If this schiff is allowed to continue, BJ Clinton and Obama will have successfully corrupted our judicial system to the level of Kenyan or Ugandan ‘courts’ – in other words: Turd World Schiff Holes!

We simply cannot elect another Democrat to the presidency, particularly one like BHO. If we do, we deserve to lose our country as founded. Every Democratic president elected in my 60 year lifetime, one way or another was an unmitigated disaster: JFK failed to save Cuba from Castro, almost got the whole world destroyed because of that failure, and saddled us with LBJ; Jimmy Peanut was, well, Jimmy Peanut, and most of his damage was done behind the scenes; BJ Clinton and BHO were two corrupt bedfellows who infested DC with the slop that Trump has had to deal with. With the possible exception of JFK, every other Dem President was an American capitalist hating traitor; no one repeatedly makes the same ‘mistakes’ over and over by accident; it was all by design. BTW, Nixon, Ford, and the Bushies were no great shakes either.

American cannot survive with but three or four great or good presidents every 100 plus years going back to Taft.

The question is: Will we finally learn from our mistakes and ignorance of the past 60 years, or will we continue to be stupid and fall for the fluff and government giveaways disguised as vote buying?